EVALUATION OF IN VITRO ANTIOXIDANT AND ANTI-INFLAMMATORY ACTIVITIES OF CASSIA AURICULATA LINN. EXTRACTS

EVALUATION OF IN VITRO ANTIOXIDANT AND ANTI-INFLAMMATORY ACTIVITIES OF CASSIA AURICULATA LINN. EXTRACTS

INTRODUCTION: Oxidative stress is an imbalance in the redox status of a cell and the excessive production of free radicals can lead to damages, mutations and ultimately the formation of cancer. Ionizing radiation exposure can impact human health in different ways and cause a broad spectrum of adverse effects including anti-proliferative, pro-inflammatory and other biological effects.

Many of the functional Phytochemicals are ascribed to their biological active poly phenol components, such as anthocyanins, flavonoids and phenolic acids, which have been proved to possessing powerful antioxidant activities. They are usually associated with prominent biological properties and prevention damage of cellular molecules. Evaluation of the total antioxidant capacity of plant products cannot be performed accurately by any single method due to their complex nature 1.

Generally, for the extraction of the bioactive compounds from plant materials, water and some organic solvents such as ethanol, methanol, acetone and diethyl ether are usually used. Additionally, during the extraction process, the extract ability depends mainly on the types of solvent and the extraction methods 2. Therefore, the objective of the study was to investigate the soluble Phytochemicals components and in vitro antioxidant activities, including FRAP, DPPH and PM scavenging activities of Cassia auriculata extracts using various solvents (Methanol, Ethanol and Chloroform extract). Also Inflammation is a very common symptom of many chronic diseases and it is normal protective response to tissue injury caused by chemical or microbial agents 3. It is well known fact that denaturation of tissue protein lead to inflammatory and arthritic diseases 4.

Inflammation plays an important role in various diseases, such as rheumatoid arthritis and asthma. During an inflammatory response, mediator such as cytokines, interleukin-1, tumor necrosis factor and interferon’s are released 5, 6. Since ancient times, in various cultures worldwide, inflammatory disorders and related diseases have been treated with plants or plant derived formulations. An anti-inflammatory activity of several plant extracts and isolated compounds has already been scientifically demonstrated 7, 8.  On revising the reviews and the studies of the herb Cassia auriculata till the date, in vitro antioxidant activities in different antioxidants parameters have not been studied. Thus in the present study; an effort has been made to overview the anti oxidant and anti-inflammatory activity of Cassia auriculata.

Crude Extraction: About 100g dried leaves were coarsely powdered and subjected to successive extraction by Soxhlet extractor. The extraction was done with different solvents in their increasing order of polarity such as Chloroform, Methanol and Ethanol. Each time the plant material was dried and later extracted with other solvents. All the extracts were concentrated by rotary vacuum evaporator and evaporated to dryness.

Estimation of Total Phenolic Content: The total phenolic content of the C. auriculata leaf extract was estimated by using Folin Ciocalteu method of Singleton et al., with slight modification 10. Gallic acid was used as the reference standard. A volume of 0.5mL of plant extract was mixed with 2mL of the Folin-Ciocalteu reagent (10 fold) and was neutralized with 4ml of sodium carbonate solution (8% w/v). The reaction mixture was incubated at room temperature for 30 min for color development. The absorbance of the resulting color was measured at 765nm using UV-vis spectrophotometer. The total phenolic contents were estimated from the linear equation of standard curve prepared with gallic acid. The content of total phenolic compounds expressed as mg/g Gallic acid equivalent (GAE).

Determination of Antioxidant Activity by using in vitro Methods:

Ferric Ion Reducing Antioxidant Power (FRAP) Assay: Ferric ions reducing power was measured according to the method of Oyaizu with a slightest modification 11. Methanol, Ethanol and Chloroform extract of C. auriculata in different concentrations ranging from100μL to 500μL were mixed with 2.5mL of 20m mol/L phosphate buffer and 2.5mL (1% w/v) potassium ferricyanide, and then the mixture was incubated at 50 °C for 30 min. Afterwards, 2.5mL of (10% w/v) trichloroacetic acid and 0.5mL of (0.1% w/v) ferric chloride were added to the mixture, which was kept aside for 10 min. Finally, the absorbance was measured at 700nm. Ascorbic acid was used as positive reference standard.

Phosphomolybdenum (PM) Assay: Total antioxidant activity was estimated by PM assay using standard procedure of Prieto et al., 12. Methanol, Ethanol and Chloroform extract of C. auriculata in different concentration ranging from 100μL to500μL were added to each test tube individually containing 3mL of distilled water and 1mL of molybdate reagent solution. These tubes were kept incubated at 95 °C for 90 min. After incubation, these tubes were normalized to room temperature for 20 - 30 min and the absorbance of the reaction mixture was measured at 695nm. Ascorbic acid was used as reference standard.

2, 2-Diphenyl-1-picrylhydrazyl (DPPH) Radical Scavenging Ability Assay: The DPPH is a stable free radical and is widely used to assess the radical scavenging activity of antioxidant component .This method is based on the reduction of DPPH in methanol solution in the presence of hydrogen donating antioxidant due to the formation of the non radical form DPPH-H 13. The free radical scavenging activity of all the extract was evaluated by 2, 2- diphenyl- 1- picryl-hydrazyl (DPPH) according to the previously reported method (Blois MS. Antioxidant determination by the use of stable free radical. Nat1958; 181: 1199-2000). Briefly, an 0.1mm solution of this solution was added to 3ml of the solution of all extract in methanol at different concentration (62.5, 125, 250 and 500μg/ml).

The mixture were shaken vigorously and allowed to stand at room temperature for 30 minutes. Then the absorbance were measured at 517nm using a UV-vis spectrophotometer. Ascorbic acid was used as reference. Lower values of the reaction mixture indicate higher free radical scavenging activity. The capability to scavenging the DPPH radical was calculated by using the following formula.

Where, A0 is the absorbance of the control reaction, and A1 is the absorbance in the presence of all of the extract samples and reference. All the tests were performed in triplicates and the results were averaged.

Evaluation of in vitro Anti-inflammatory Activity: Anti-inflammatory activity of methanol, ethanol and chloroform extract of C. auriculata was evaluated by protein denaturation method as described by Padmanabhan et al., with slight modifications 14. Diclofenac sodium, a powerful non steroidal anti-inflammatory drug was used as a standard drug. The reaction mixture consisting of 2mL of different concentrations of C. auriculata methanol, chloroform and ethanol extract (100 - 500μg/mL) or standard Diclofenac sodium (100 and 200μg/mL) and 2.8mL of phosphate buffered saline (pH 6.4) was mixed with 2mL of egg albumin (from fresh hen’s egg) and incubated at (27 ± 1) °C for 15 min. Denaturation was induced by keeping the reaction mixture at 70 °C in a water bath for 10 min. After cooling, the absorbance was measured at 660nm by using double distilled water as blank. Each experiment was done in triplicate and the average was taken. The percentage inhibition of protein denaturation was calculated by using the following formula;

Phytochemicals Analysis: Preliminary Phyto-chemicals analysis of the extract showed the presence of major classes of Phytochemicals such as Tannins, alkaloids, flavonoids, cardiac glycosides etc., (Table 1). Proteins and amino acids were not detected in these extract. 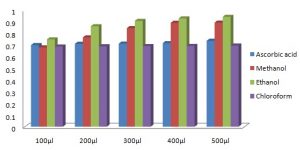 DPPH Assay: In the present study, the different concentrations of Ethanol chloroform and methanol extract of leaves of C. auriculata were subjected to DPPH free radical scavenging assay. The antioxidant capacity of the extract was compared with ascorbic acid as standard as antioxidant. Ethanol extract exhibited higher antioxidant activity than the methanol extract (Table 2).

In vitro Anti-inflammatory Assay: In the present study, known concentrations of Ethanol, chloroform and methanol extract of C. auriculata were subjected for anti inflammatory activity on protein denaturation. The in vitro anti inflammatory activity of the extract was comparable to the Diclofenac sodium, a reference drug 14. A significant difference in the inhibition of thermally induced protein denaturation was observed in case of Ethanol, Chloroform and Methanol extract when compared with standard drug at concentration of 100μg/mL. Ethanol and Methanol extract shows higher inhibition activity whereas Chloroform extract showed less inhibitory activity (Table 3).

DISCUSSION: Medicinal plants are since ancient times lauded for their diverse pharmacological actions which could be attributed to the presence of secondary metabolites such as alkaloids, flavonoids, glycosides, tannins, steroids etc. Some of these plants are important sources of natural antioxidant that have been shown to reduce the risk and progression of certain acute and chronic diseases such as cancer, heart diseases and stroke by scavenging free radicals which are impetrated in the pathogens us of many diseases 16, 17.

The results of preliminary Phytochemicals screening confirmed the presence of various classes of Secondary metabolites in the Cassia auriculata leaf extract including polyphenols (Tannins and Flavonoids). Plant polyphenols produced either from phenyl alanine or its precursor shikmic acid, are important dietary antioxidants because they possess ideal structural chemistry for free radical scavenging activity. Numerous in vitro studies have shown antioxidant potential in protecting against many diseases 18. The present study indicates that leaves of Cassia auriculata are rich in phenolic compound (68.25mg/g) with ethanolic extract.

The methanol extract of the herb was found to be having significant anti-oxidant activity. These results may also be helpful to describe the various pharmacological activities like anti-infective, protective activities.

The DPPH test provides information on the reactivity of the test compounds with stable free radicals. The DPPH assay is often used to evaluate the ability of antioxidants to scavenge the free radical from test samples. Whereby, the free radicals cause biological damage through oxidative stress and such process lead to many disorders like nuerodegerative diseases, cancer and AIDS 20. Therefore, DPPH assay is an effective method to measure their scavenging power. The principle of the DPPH assay is based on the colour changes from purple (DPPH solution) to yellow 21. The colour changes can be measured quantitatively by spectrophotometer absorbance at 517nm.

In the present study, antioxidant activity of   C. auriculata was evaluated using Chloroform, Ethanol and Methanol extract of plant and was compared with standard ascorbic acid. Results obtained showed that standard antioxidant had higher scavenging activity at all tested concentrations than the extracts. Among the extracts, Methanol extract exhibited higher activity than the Ethanol and chloroform extract (Table 2). Significant difference was observed among antioxidant activities of evaluated extracts and methanol extract came out as a superior total antioxidant capacity, with significant higher results in all performed assays.

Inflammation is a symptom of many chronic diseases. It is a normal protective response to tissue injury caused by physical taurama noxious chemical or by microbial agents. Inflammation is a protective attempt by the body to remove injurious stimuli as well as initiate the healing process of the tissue 22. It is non steroidal anti-inflammatory drugs are commonly used for the management of inflammatory conditions, but these are associated with many unwanted side effects such as gastric irritation, ulcer etc., 23. Medicinal plants used in traditional medicine to treat anti-inflammatory conditions seem viable and logical alternative in search of safe and effective anti-inflammatory agent. Hence in this study plant extract subjected to simple and viable protein denaturation bioassay method to evaluate its potential as anti -inflammatory drug. It is well known fact that denaturation of tissue protein leads to inflammatory and arthritic diseases 24.