Antioxidants are the molecules of defence that quench these hazardous free radicals and reduce their potential to attack the cells, thereby protecting the cells. They neutralize free radicals by accepting or donating an electron to eliminate the unpaired condition.

Antioxidant properties of phenolics and flavonoids: Flavonoids are well known for their antioxidant activity. Antioxidants are specific compounds that protect human, animal and plant cells against the damaging effects of free radicals (reactive oxygen species ROS). An imbalance between antioxidants and free radicals results in oxidative stress, which may lead to cellular damage 4.

Natural or phytochemical antioxidants such as phenolic acids, flavonoids and carotenoids are secondary metabolites in plants. They are amongst the antioxidants produced by plants for their sustenance. Recently, phenolics and flavonoids have been considered as great antioxidants and proved to be more effective than Vitamin C, E and carotenoids. The antioxidant properties of phenolic and flavonoid compounds are mediated by the following mechanisms: (1) scavenging radical species such as ROS/ reactive nitrogen species (RNS); (2) suppressing ROS/RNS formation by inhibiting some enzymes or chelating trace metals involved in free radical production; (3) up regulating antioxidant defence. The reduction activity of phenolic and flavonoid compounds depends on the number of free hydroxyl groups in the molecular structure, which would be strengthened by steric hindrance 5.

Garcinol has high antioxidant activity in comparison with ascorbic acid and α-tocopherol. In addition, garcinol showed significant chelating activity and high scavenging activity against hydroxyl radicals. This was further investigated in vivo and it was shown that garcinol efficiently prevented the development of gastric injury and ulcer, in comparison with a positive control 6. These findings are confirmed by ethnobotanical practice and traditional use of G. brasiliensis, which has been reported in Brazilian folk medicine to treat peptic ulcer 7.

The antioxidant properties of phenolic compounds are mainly because of their redox potential, which allow them to act as reducing agents, hydrogen donors, metal chelators and singlet oxygen quenchers 8. It is known that the degree of glycosylation significantly affects the antioxidant properties of the compounds, for example, aglycones of quercetin and myricetin were more active than their glycosides.

The chemical structure of polyphenols gives them the ability to act as free radical scavengers. The type of compound, the degree of methoxylation and the number of hydroxyl groups are some of the parameters that determine the antioxidant activity. As for phenolic acids, the oxidation inhibition is related to the chelation of metal ions via the ortho dihydroxy phenolic structure, the scavenging of alkoxyl and peroxyl radicals, and the regeneration of α-tocopherol through reduction of the tocopheryl radical 9.

Extraction and Fractionation:  10 Extraction of the dried leaves of Garcinia brasiliensis were carried out using ethanol by hot extraction using the reflux condensation. The total ethanolic extract (TE) was then fractionated using solvents in the increasing order of polarity.

Estimation of flavonoids: The total flavonoid content is estimated by Aluminium Chloride Colorimetric assay 12. 1mL aliquots of 10, 20, 30, 40, 50, 60, 70, 80, 90 and 100 mcg/ml methanolic rutin solutions were used as standard for calibration curve. The gram equivalents of rutin per 100g of the various fractions were obtained.

Ferric Reducing Power Assay: 13 0.5 ml of different concentrations (25-150 mcg/ml) of standard and samples were mixed with 0.5 ml of 0.2 M phosphate buffer (pH 6.6) and 0.5 ml of a 1% potassium ferricyanide solution. The mixture was incubated in a water bath at 50°C for 20 min. Subsequently, 0.5 ml of 10% (w/v) trichloroacetic acid solution was added, and the mixture was then centrifuged at 3000 rpm for 10mins. Finally, 0.5 ml of the supernatant layer solution was mixed with 0.5 ml of distilled water and 0.1 ml of 0.1% ferric chloride and the absorbance of the reaction mixture were measured at 700 nm. The experiment was performed in triplicate. The blank used here was ethanol. A control was also prepared omitting the sample.

Statistical analysis: Data were expressed as mean±SD. Statistical analysis were performed by using one-way analysis of variance (ANOVA) followed by the Dunnett’s test for multiple comparisons of unpaired data. Differences were considered significant at P≤0.05.

Estimation of Total Phenolic Content: The total phenolic content in the various fractions were found out by Folin Cio-calteau method. The absorbance values obtained for different concentrations of standard gallic acid are tabulated and the standard graph is shown in Fig.1.

The absorbance values for the various extracts were recorded and the total phenolic content in gallic acid equivalent are given in the Table 1.

TABLE 1: ESTIMATION OF TOTAL PHENOL CONTENTS OF THE VARIOUS FRACTIONS

Estimation of Total Flavonoid Content: Estimation of total flavonoids in the various fractions were carried out by using aluminium chloride colorimetric method. The absorbance values obtained for different concentrations of the standard rutin are tabulated and the standard graph in Fig. 2

The absorbance values for the various extracts are recorded and the total flavonoid content as rutin equivalent per 100 g are given in the table no:2.

TABLE 2: ESTIMATION OF TOTAL FLAVONOID CONTENT OF THE VARIOUS EXTRACTS 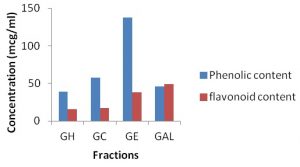 FIG. 3: COMPARISON OF THE TOTAL PHENOLIC AND FLAVONOID CONTENTS OF THE VARIOUS FRACTIONS

The leaves of Garcinia brasiliensis are both rich in phenolics and flavonoids. 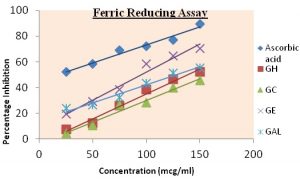 FIG. 4: COMPARISON OF THE PERCENTAGE INHIBITION OF THE VARIOUS FRACTIONS WITH THE STANDARD 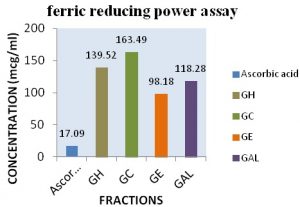 FIG. 5: COMPARISON OF THE IC50 VALUES OF THE VARIOUS FRACTIONS WITH THE STANDARD      ASCORBIC ACID USING FERRIC REDUCING ASSAY

The ethylacetate fraction has an IC50 value of 98.18mcg/ml which is comparable with the IC50 value of the standard ascorbic acid (17.09mcg/ml) for the ferric reducing power assay. 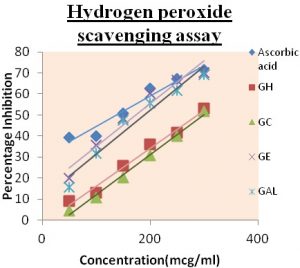 FIG. 6: COMPARISON OF THE PERCENTAGE INHIBITION OF THE VARIOUS FRACTIONS WITH THE STANDARD ASCORBIC ACID USING HYDROGEN PEROXIDE SCAVENGING 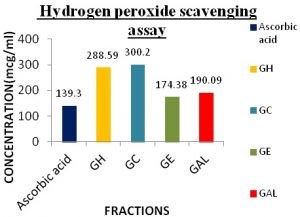 FIG. 7: COMPARISON OF THE IC50 VALUES OF THE VARIOUS FRACTIONS WITH THE STANDARD ASCORBIC ACID USING HYDROGEN PEROXIDE SCAVENGING ASSAY

The ethylacetate fraction has an IC50 value of 174.38mcg/ml which is comparable with the IC50 value of the standard ascorbic acid (139.3mcg/ml) for the hydrogen peroxide scavenging assay.

Statistical analysis is tabulated as below: Table 4 Statistical data for hydrogen peroxide scavenging assay by the various fractions.

In alcoholic fraction, the phenolic content and the flavonoid content were found to be approximately equal. Most of the activities by the plant extracts are attributed by the phenolics present.

The antioxidant activities of the various fractions were tested. The highest antioxidant activity was displayed by the ethylacetate fraction in scavenging hydroxyl free radical with an IC50 value of 174.38 mcg/ml. Ferric reducing power shown by the ethylacetate fraction (IC50=98.13mcg/ml) was remarkable and was comparable with the standard ascorbic acid. The n-hexane fraction as well as the chloroform fraction showed significant antioxidant capacity when compared to the standard ascorbic acid in scavenging the hydrogen peroxide.

ACKNOWLEDGEMENT: The authors are thankful to the staff members of Institute for Intensive Research in Basic Sciences (IIRBS), M G University, Kottayam and University College of Pharmacy, Cheruvandoor for providing the necessary support to carry out this work.