INTRODUCTION:The liver is a major detoxifying organ in vertebrate body, which involves intense metabolic activities. Certain toxic chemicals, medicines can cause liver damage, which has been recognized as a toxicological problem. However, herbal medicines are known to play an important role in the treatment of various ailments, including hepatopathy. Many traditional practitioners have claimed that numerous medicinal plants and their formulations can be effectively used for the alleviation of different types of liver diseases 1.

Liver damage is always associated with cellular necrosis, increase in lipid peroxidation and reduction in the tissue GSH levels. In addition serum levels of many biochemical markers like SGOT, SGPT, ALP and Bilirubin are elevated. Conventional drugs used in the treatment of liver diseases are unsatisfactory and sometimes can have serious side effects 2.

Administration of INH produces abbreviation in liver. The INH induced hepatotoxicity is initiated by CYP-450-mediated metabolism to toxic metabolites such as acetyl hydrazine and hydrazine. Hydrazine reacts with sulfhydryl group, which result in glutathione depletion within the hepatocytes leading to cell death 3.

The leaves of this species have a distinction of being used in Indian folk medicine for treating ulcers. There is however, a need to study and provide evidence for the efficacy of Jasminum extract in the treatment of liver disease 4.

Drugs and chemicals: INH procured from research labs and Silymarin was obtained from Microlabs. All other chemicals were of analytical grade.

Preparation of JG Alcoholic Plant Extract: The leaves of JG were collected from the fields surrounding Pune and were authentified by Botanical Survey of India, Pune. The leaves were air dried, powered, and then extracted with 70% ethanol by using Soxhlet method. The extract was filtered with filter paper and then the solvent was evaporated at reduced pressure by using rota-evaporator apparatus (HEIDOLPH) to get viscous mass. The yield of extract obtained was 7 %.

Phytochemical Study: Preliminary phytochemical screening of the powdered leaves was performed for the presence of alkaloids, phenolics, flavonoids, saponins, carotenoids, carbohydrates and glycoside.5

Acute Toxicity Studies: In LD50 studies, it was found that the animals were safe upto a maximum dose of 2000 mg/kg body weight. There were no changes in normal behavior pattern and no signs and symptoms of toxicity and mortality were observed. The biological evaluation was carried out at doses of 200 mg/kg body weight 6.

Determination of Total Phenolic Content: Total phenolic content of JG extract was measured by Folin-Ciocalteu reagent as an oxidizing agent and Gallic acid as standard. To 0.5ml of extract solution (2mg/ml) in water, 2.5ml of Folin-Ciocalteu reagent and 2ml of sodium carbonate solution were added. After 20 min, incubate at room temperature. The absorbance was measured at 760nm using UV Visible spectro-photometer. Total phenolic were quantified by calibration curve obtained from measuring known concentration of Gallic acid 7.

Experimental Animals: Albino Wistar rats (150-200g) were obtained from animal house facility of Smt. Kashibai Navale College of Pharmacy, Pune and were housed in clean cages and in a well ventilated facility with free access to standard feed and drinking tap water. The animals were kept at room temperature (28±2 C0) with a 12 h daylight/ dark cycle under humid tropical conditions. All procedures involving the use of laboratory animals were in accordance to the CPCSEA and were approved by the institutional animal ethical committee.

Assessment of Lipid Peroxidation (LPO): Lipid peroxidation by TBRS method carried out by using MDA equivalents derived from tetraethoxypropane. MDA and other aldehyde have been identified as products of LPO that reacts with Thiobarbituric acid to give pink colored species that absorbs at 532nm.The method involved heating of biological sample with TBA reagent for 20 min in a boiling water bath. TBA reagent contains 20% Trichloroacetic acid, 0.5% Thiobarbituric acid and 2.5% N HCl. After cooling, the solution was centrifuged at 2000rpm for 10 min and precipitate obtained was removed. The absorbance of the supernatant was determined at 532nm against the blank. 9.

Assessment of liver damage: Blood was collected under ether anesthesia 24 h after last dose and analyzed for serum AST, ALT and Lipid profile. The liver tissue was dissected out immediately washed with ice cold saline and used for determination of liver weight, liver index and collagen content.

Histopathological investigations: Liver tissue were dissected out and fixed in 10% formalin. The paraffin sections were prepared and stained with hematoxylin, eosin and examined using light microscopy. 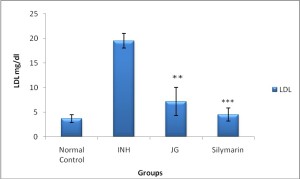 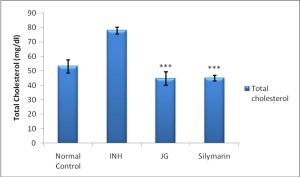 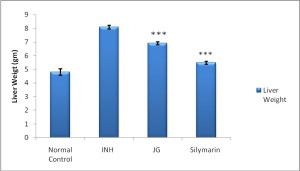 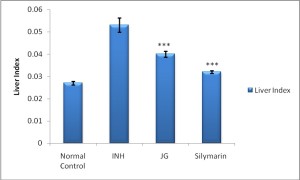 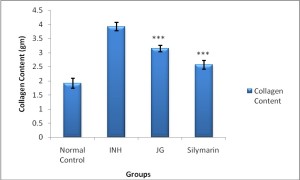 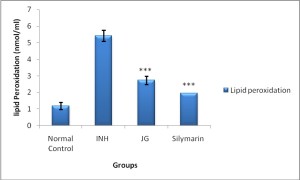 Estimation of Total Phenolic Content: Phenolics are very important plant constituents because of their scavenging capability due to their hydroxyl groups. It has been revealed that various phenolic antioxidants such as flavonoids, tannins, coumarins, xanthones and more recently procyanidins scavenge radicals dose dependently, thus they are viewed as promising therapeutic drugs for free radical pathologies. In the present study total phenolic compound of ethanolic extract was found to 1220 mg/gm gallic acid equivalent. 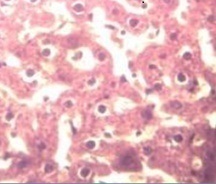 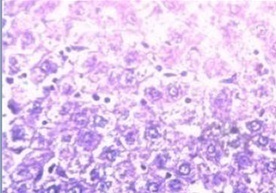 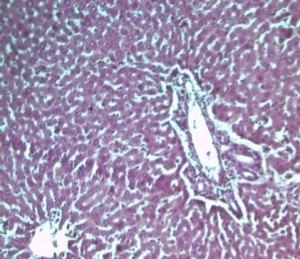 DISCUSSION: Liver injuries induced by INH are the best characterized system of drugs induced hepatotoxicity and commonly used models for the screening of anti-TB and hepatoprotective activities of drugs. One of the major functions of the liver is detoxification of xenobiotics and toxins.

Among various cytochrome diverse families, CYP 450 is an important enzyme involved in metabolism of many drugs and it is abundantly found in liver with majority in numbers. INH is metabolized into bioactive metabolites. AST and ALT are enzymes originally present in high concentration in the cytoplasm.

When liver cells are in injury, these enzymes leak into the blood stream and manifest significantly elevated serum levels. Pretreatment with ethanolic extract of JG, the level of these marker enzymes in serum were near normal, this may be consequence of the stabilization of plasma membrane as well as repair of hepatic tissue damage cause by isoniazid 10.

In case of INH treated rats there is increase in total liver weight. Because of enhanced hyaluronan deposition and its associated water of hydration appears to be associated with this increase in liver size 12.Accumulation of connective tissue proteins, especially collagen, has been reported in INH-induced liver injury, because of this there may be any obstruction in blood flow due to accumulation of collagen in liver. This accumulation of collagen was decrease by treatment with JG 13.MDA level in liver tissue was used to determine the extent of lipid peroxidation in hepatocytes.

In the present study, elevation of lipid peroxidation in the liver of rats treated with INH was observed. The increases in MDA level in liver suggest enhanced lipid peroxidation leading to tissue damage. Treatment with JG significantly reversed these changes. Hence it is possible that the mechanism of hepatoprotection of whole plant of JG may be due to its antioxidant activity 14.

CONCLUSION: The herbal drug JGat a dose (200 mg/kg) may found to act via CYP 450 metabolic pathway, as it lead to protection to the liver and significant decrease in the level of liver marker enzymes, lipid peroxidation, liver weight, liver index, and collagen content.

The dose (200 mg/kg) can be the optimal dose showing hepatoprotective activity. In conclusion, the results of this study showed that JG has therapeutic potential in the management of drug induced liver toxicity.