ABSTRACT: This study compares the performance of Mycobacterium Growth Indicator Tube (MGIT) culture against conventional Lowenstein Jensen (LJ) media and direct AFB smear examination in pulmonary and extra pulmonary tuberculosis specimens for isolation and drug sensitivity testing (DST) using solid (LJ) and liquid (BACTEC-MGIT-320) media at a tertiary care centre in North India A total of 132 consecutive clinical samples were obtained from suspected cases of TB for smear-microscopy and culture on LJ and BACTEC-MGIT-320. Positive cultures underwent DST for streptomycin, isoniazid, rifampicin and ethambutol. A total of 132 specimens were cultured on LJ and the BACTEC-MGIT-320. The mean (range) time to detection was 14.2 (3–40) and 23.2 (8–42) days for MGIT-320 and LJ, respectively 69 (52.3%) were positive with either MGIT or culture of which 45 (65.2%) were smear positive and 24(34.8%) were smear negative. On comparing MGIT and LJ culture, 65 (94.2%) were positive with MGIT-320 whereas 62(89.8%) LJ cultures were positive DST was conducted on both MGIT-320 and LJ media in the 58 concordant culture-positive isolates. Thirty patients were classified as having MDR by at least one of the two methods. Of these 28 were identified by MGIT-320 and 24 by LJ (proportion method).Although liquid culture is more sensitive than solid culture, but there was a high degree of agreement between the two systems. Their combined use resulted in a higher recovery rate and detection of more drug resistance strains than using only one of the two methods. The mean time to detection was shorter with liquid culture and its monitoring can be automated to facilitate dealing with large number of specimens

INTRODUCTION: Tuberculosis has a high incidence in India, estimated at 211/100,000 inhabitants.1 The resurgence of tuberculosis and outbreaks of multidrug-resistant Mycobacterium tuberculosis has increased the emphasis on rapid turn-round time for mycobacterial cultures and susceptibility testing for effective treatment and control of the disease. 2, 3, 4

Of the pulmonary cases, which make up the vast majority, approximately 30% have negative acid-fast bacilli (AFB) smears.(anonymous). In their 2013 Global Tuberculosis Report, the World Health Organization (WHO) claimed that culture is still the reference method for the detection of Mycobacterium tuberculosis (Mtb) 1, however it require a long time for growth and species-typification of mycobacteria, leading to a longer period of infectivity, worsening of the patient’s clinical condition, and loss of productivity. For these reasons, numerous attempts have been made to develop faster and more sensitive culture media for Mycobacterium tuberculosis. Many of these have been described in the literature, however, only a few are now routinely used in the diagnosis of tuberculosis because of their requirement for special equipment, as in the radiometric methods, which makes them unaffordable in most developing countries.

The present study was carried out to compare one such automated system, i.e., BACTEC MGIT 320 (M320) with conventional culture method, i.e., LJ media and direct AFB smear examination. We have also compared the drug susceptibilities of M. tuberculosis clinical isolates to streptomycin, isoniazid, rifampin and ethambutol obtained by MGIT 320 culture system with obtained with the proportion methods.

M320 system is a fully automated, high capacity, non-radiometric, non-invasive instrument, which requires neither needles nor other sharp implements to incubate and monitor 320; 7 mL culture tubes. 5   The culture tubes contain Modified middle brook 7H9 media with fluorescent growth indicator embedded in silicone on the bottom of each tube. This compound is sensitive to the presence of dissolved oxygen in the broth. As the microorganisms grow in the media, oxygen gets depleted, allowing the fluorescence to be detected automatically over time. 6

This prospective study was carried out in the Department of Microbiology SRMSIMS, Bhojipura, Bareilly, over a period of twelve months, from November 2012 to October 2013, at a tertiary care hospital that also operates as a centre for the Revised National Tuberculosis Control Program (RNTCP). A total of 132 consecutive clinical samples were obtained from suspected cases of TB from different wards and outpatient departments. The samples included sputum (81), pleural fluid (5), bronchial washings (21), pus (3), ascitic fluid (3), endometrial Tissue (8), gastric aspirate (3), lymph node aspirate (4), menstrual blood (3), and tissue from sinus tract (1). Informed and written consent was taken from patients before enrollment.

Within 24 h of receiving the samples, direct smear were made, stained by Ziehl Neelsen method and graded as per RNTCP guidelines. For digestion and decontamination, a maximum of 10 mL sample was taken in a falcon tube. An equal amount of a mixture containing 50 mL of 4% sodium hydroxide, 50 mL of 2.9% sodium citrate and 0.5% N -acetyl cysteine was added to it. The falcon tube was vortexed well and then kept at 37 °C for 20 min. After that, neutralization was done by filling the tube up to 50 mL mark with sterile phosphate buffered saline (pH 6.8). The tube was centrifuged for 20 min at 3000 × g. Supernatant was discarded and the pellet was reconstituted with 1 mL of sterile phosphate buffer, 0.5 mL of this was added to the M320 tube and two drops on the LJ media. Samples from sterile sites were inoculated as such or after centrifugation, without digestion and decontamination.

A BBL MGIT tube (from Becton Dickinson) containing 7 mL modified middle brook 7H9 broth was used. Lyophilized MGIT PANTA (containing polymyxin B, azlocillin, nalidixic acid, trimethoprim, amphotericin B) was reconstituted with MGIT growth supplement (containing oleic acid, albumin, dextrose, catalase, polyoxyethylene stearate), and 0.8 mL of this was added prior to sample inoculation to the M960 tube. LJ media was prepared in the laboratory. The inoculated media were incubated at 37°C, MGIT tubes were incubated inside the M320 instrument for 6 weeks and LJ media were incubated for 6-8 weeks.

The inoculated L-J media were examined every second day during the first week and then weekly for upto 8 weeks for presence of growth. The growth was identified by standard morphological and biochemical test and examined every week. M320 instrument detects the growth automatically; flashing red light to indicate instrument positive tubes and green for negative ones. Smears were made from MGIT-positive culture tubes as well as from MGIT negative tubes that had some deposit in them, to confirm the presence or absence of Mycobacteria, as per the protocol of Becton Dickinson.

Susceptibility testing was performed according to the protocol provided by the manufacturer. Tubes were prepared by adding 0.5 mL of MGIT OADC enrichment (Becton Dickinson) and 0.5 mL of a 1:5 dilution (with sterile saline) of the inoculum prepared as described previously. For each sample, four drug containing MGITS and one control tube without drug were inoculated. Antimycobacterial drugs were adjusted in the MGITS to final concentrations of 0.8 mg/L for streptomycin, 0.1 mg/L for isoniazid, 1 mg/L for rifampin and 3.5 mg/L for ethambutol, as recommended by the manufacturer.

Strict Quality control was maintained as per the manufacturer protocol. It was carried out using STD H 37 RV and ATCC strains of M. tuberculosis complex and Non-tuberculosis mycobacteria (NTM).

TABLE 1: MEAN TIME TO DETECTION OF MYCOBACTERIA IN CLINICAL SPECIMENS

MGIT-320 positive and 8 contaminated by one but not the other method. The use of both methods allowed the identification of 69 cases that were positive by one method but negative by the other method.  Similarly, although 9 cultures were contaminated (8 LJ and 2 MGIT-320), only 1 of these were contaminated by both methods. Using both methods therefore resulted in an additional yield of cultures with interpretable results. Four of the smear positive pulmonary specimens did not grow on any of the culture media used (patients were already on anti- tuberculosis drugs).

TABLE 2: COMPARATIVE DETECTION OF MYCOBACTERIUM ACCORDING TO THE TYPE OF SPECIMEN AND CULTURE MEDIUM

DST was conducted on both MGIT-320 and LJ media in the 58 concordant culture-positive isolates. The DST results obtained by LJ and MGIT 320 are shown in Fig. 1. Thirty patients were classified as having MDR by at least one of the two methods. Of these 28 were identified by MGIT-320 and 24 by LJ (proportion method). 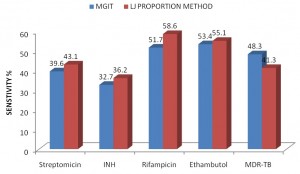 FIG. 1: COMPARATIVE EVALUATION AMONG THE RESULTS FOR THE FOUR DRUGS OBTAINED WITH THE MGIT SYSTEM WITH THOSE OBTAINED THE LJ PROPORTION METHOD

DISCUSSION: The worldwide increase in the incidence of tuberculosis 8 and the growing number of mycobacterium infections require fast and efficient cultivation strategies that can easily be applied in a mycobacteriology laboratory. Results obtained with the conventional indirect susceptibility testing methods, especially with solid media, become available too late to influence a timely decision on patient management. Most National TB control programmes (NTP) are strengthening their capacity for the treatment of MDR-TB, but despite these steps many patients are unconfirmed because relatively few centres are equipped or have the resources to conduct DST. 9

A new method, the Mycobacterial Growth Indicator Tube (MGIT) (Becton Dickinson Microbiology System, Sparks, MD, USA), uses a fluorescence quenching-based oxygen sensor to detect the growth of mycobacteria. Recently, the MGIT system has been evaluated as a non-radiometric alternative to the Bactec TB system for the rapid growth and detection of mycobacteria.10

This study describes the performance characteristics of rapid liquid culture (MGIT 320), solid culture (LJ Medium) and microscopy for the identification of MTC and compare the drug susceptibilities obtained by the two culture methods.

We obtained a higher sensitivity of liquid culture, amongst the total positive specimens (69), 94% were detected by MGIT and 89%were positive with LJ. Various authors have reported similar findings ranging from 80 to 100% for MGIT and from 59.7 to 87.2% for LJ. 11 Thus, MGIT was found to be most rapid and efficient system to isolate Mycobacteria. However, for maximum recovery of Mycobacteria, it is important to use both types of culture methods as 5.8% isolates could be detected by LJ only.

In our study, the turn-round time for the MGIT system was 3-40 days (mean 14.2). Which is similar to preliminary results previously reported, 12, 13 compared with 8-42 days for LJ (mean 23.2). This advantage would enable clinicians to establish a definitive diagnosis, and institute appropriate therapy and infection control measures within the shortest possible time.

Liquid culture has been reported to identify more cases of first-line drug resistance than LJ by some14 but other studies mention a high degree of agreement between the two. 15 In agreement with the latter studies, we obtained a higher sensitivity of liquid culture and also a high agreement between the two DST methods. The proportion of drug resistance was very high in the studied population, almost half of the isolates being MDR TB either identified with one or the other method. However using the two in combination have increased the chances of identifying MDR-TB cases. Those with isolated resistance to rifampicin were very few and almost all rifampin-resistant isolates were MDR TB suggesting that rifampin resistance may serve as a reliable surrogate marker for MDR TB in our population. Though the cost of this liquid culture system is approximately 8-10 times more than that for LJ media, the sensitivity and rapidity of the system are the major advantages that will not only benefit the individual patient but also the community by controlling the disease and lastly its transmission in the society. 11

CONCLUSION: In conclusion, although liquid culture is more sensitive than solid culture, but there is a high degree of agreement between the two systems, both in identification and drug susceptibility. The mean time to detection was shorter with liquid culture and its monitoring can be automated to facilitate dealing with large number of specimens.