In the present study, a series of some novel benzothaizole derivatives (BZT 1-10) were screened for their antibacterial activity against S. typhi, S. dysenterae, E. coli, S.aureus and B. subtlis employing Disc Diffusion method and taking Agar as culture media. Streptomycin (25µg/ml) was used as a standard drug. The solvent, DMSO used for the preparation of compounds did not show inhibition against the tested organisms which serves as the negative control. After evaluation of results, most of the derivatives have shown efficient diameter of zone of inhibition as compared to control as well as standard which confirms the promising antibacterial activity of the benzothaizole derivatives.

INTRODUCTION: Benzazoles are an extremely important class of compounds that occur widely as biologically active natural products, as well as marketed drugs or drug candidates.  All benzazoles have two heteroatoms attached at the ortho position on the benzene ring having one nitrogen atom common for all three benzazoles (benzothiazole, benzimidazole and benzoisoxazole), in case of benzothiazle one heteroatom is sulfur. Benzothiazoles are condensed heterocyclic organosulfur compounds consist of a five member nitrogen and sulfur containing ring; thiazole fused with six member homocyclic ring; benzene.

In the 1950s, a number of 2-benzothiazolamines were intensively studied as central muscle relaxants. The major work concerned with this field is that of Domino et al 1.Since then medicinal chemists have not taken an active interest in this chemical family. Biologist’s attention was drawn to this series when the pharmacological profile of riluzole was discovered. Riluzole2 (1, 6-(trifluoromethoxy)-2-benzothiazolamine, PK 26124, RP 54274, Rilutek) was found to interfere with glutamate neurotransmission in biochemical, electrophysiological, and behavioral experiments.

The benzothiazole ring is present in various marine and terrestrial natural compounds, which have useful biological activities 3-6. As an intermediate 2-aminobenzothiazoles are broadly found in bioorganic and medicinal chemistry with applications in drug discovery and development for the treatment of diabetes 7-16,epilepsy 17-23, inflammation,24 analgesia,25,26 amyotrophic lateral sclerosis,27 and viral infections 28. They also exhibits antitumor 29-42, antitubercular 43, antibacterial 44, 45,antifungal 46-47, antimalarial 48,antihelmintic 49.

By measuring the zone of inhibition, antibacterial susceptibility of the compound can be evaluated. Anti-bacterial activity a series of ten novel compounds (BZT 1-10) were evaluated against various pathogenic bacterial strains both Gram-negative and Gram-positive. The anti-bacterial activities were evaluated by agar disc diffusion method as per the guidelines of the National Committee for Clinical Laboratory Standards (NCCLS, 1997) 54. The solvent, DMSO used for the preparation of compounds did not show inhibition against the tested organisms.

The inoculums was spread on the surface of the solidified media and Whatman no. 1 filter paper discs (6 mm in diameter) impregnated with the test compound were placed on the plates. Streptomycin was used as positive control for bacteria. A paper disc impregnated with dimethylsulfoxide (DMSO) was used as negative control. Plates inoculated with the bacteria were incubated for 24 h at 37 ºC. The inhibition zone diameters were measured in millimetres. All the tests were performed in triplicate and the average was taken as final reading.

Preparation of Nutrient Agar Media: Sodium chloride, peptone, beef extract, agar were weight out and dissolved in required amount of distilled water by keeping the media in the steam bath, the agar was melted out and the indicator was added and the volume was made with distilled water, pH was adjusted to 7.2-7.4. Then the flux was plugged and wrapped in paper, then autoclave at 15 psi pressure at 121oC for 15 min.

Preparation of Petri dishes: Antibacterial activity of synthesized drug was screened by filter paper disc method. A previously liquefied medium, appropriate for the test is inoculated with the requisite quantity of the suspension of the microorganism, the suspension was added to the medium at a temperature between 40-50oC and the inoculated medium was poured immediately into dried Petri dishes to occupy a depth of 3 to 4 mm. The paper disc (No.1Whatmann) was cut downed into small disc (6mm diameter) and sterilized at 160oC/1hr in hot air oven impregnated with the test solution and the standard solution. The dried discs were placed on the surface of the medium. The dishes were left standing for 1-4 hrs, at room temperature as a period of pre- incubation diffusion.

Again for the compounds BZT-6 and BZT-7 the zone of inhibition was found to be quite significant as compared to the other compounds, which confirms that it possess potent antibacterial activity which may be due to the presence of strong electron withdrawing groups fluorine and chlorine respectively on the respective amine of the compounds.

Where BZT-9 and BZT-10 also proved to be effective against the microbes as the diameter of zone of inhibition was found to be above 18mm for the all the microbes, which confirms its promising antibacterial activity , which may be due the presence of pyridine ring in BZT-9 and presence of additional -SO2NH2 group in the compound BZT-10.

TABLE 2: Antibacterial activity of the compounds

DMSO was taken as negative control and Streptomycin was taken as standard drug. The zone of inhibition was measured in mm. 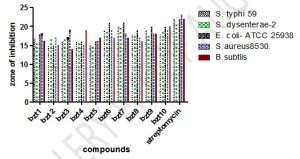 ACKNOWLEDGEMENTS: The authors are thankful to the Principal Dr. O. P. Singh, S. Sinha College Aurangabad, Bihar, India for providing the facilities to carry out the research work.