ABSTRACT The practice of traditional medicine for the control of fertility in most parts of India is based on the uses of plant medicines for many years. The fact that herbal medicines have been employed for such a long time does not guarantee their efficacy and safety. The aim of the present study was, therefore, to carry out phytochemical screening, efficacy and safety studies on one of the traditionally used antifertility plants: Curcuma aromatica Salisb. The secondary metabolites of the rhizomes of this plant were determined. The ethanolic and aqueous extract of the rhizomes of this plant were investigated for their antifertility activity in female rats The identification of the secondary metabolites showed that the rhizomes of the plant contained phytosterols, alkaloids, carbohydrate and saponins. The ethanolic and aqueous extract of this plant at two different doses of 200mg kg -1 and 400 mg kg -1 b.w. prevented the pregnancy. The aqueous extract were found to possess more significant (p<0.001) antifertility activity compared to alcoholic extract. All these observations suggest that the extract has antifertility effect and is safe at the effective antifertility doses employed in this study.

The investigation of plant constituents with anti-fertility properties represents a potential alternative approach to birth control from the existing available methods. If an estrogen from a local source could be shown to be active in humans, it would be of great value as a fertility-regulating agent. It is noted that anti-fertility agents work by disrupting or desynchronizing pre-ovulatory and pre-implantation events. Anti- fertility activity is often due to estrogenic activity, but can also be due to anti-estrogenic activity. Furthermore, plants can act as anti-fertility agents. These plants can be classified according to their activity profile such as Anti-ovulatory plants; Interceptory and Abortifacient plants; and uterine tonus and uterine stimulants. In addition, there are also plants that regulate fertility in males. These include antispermatogenic plants; spermicidal and semen coagulant plants; and fertility inhibiting plants 1. The development of new fertility regulating drug from medicinal plants is an attractive proposition, because from times immemorial human shave relied on plants and their products as sources of drugs and therapeutic agents, although in recent times, synthetic drugs are used extensively in modern medicine. However many modern medicines are developed through the clues obtained from phytochemical. Family planning has been promoted through several methods of contraception, but due to serious adverse effects produced by synthetic steroidal contraceptives, attention has now been focused on indigenous plants for possible contraceptive effect. Although contraceptives containing estrogen and progesterone are effective and popular, the risks associated to the drugs have triggered the need to develop newer molecules from medicinal plants. Hence, there is a need for searching suitable product from indigenous medicinal plants that could be effectively used in the place of pills. More over the phytochemical even today are important resources for medicine. Rapid population growth has caused a serious problem in economic growth and human development in developing countries. The control of human fertility, in the sense of its limitation is the most important and the urgent one amongst all bio-social and medicinal problems, confronting mankind today. Birth-control is a regimen of one or more action, devices, or medication followed in order to prevent deliberately or reduce the likelihood of a woman becoming pregnant or giving birth. Methods and intentions, typically termed for birth-control may be considered a pivotal ingredient to family planning. Mechanism which is intended to reduce the likelihood of the fertilization of an ovum by a spermatozoon may more specifically be referred to as Contraception 2.

The plant material Curcuma aromatica rhizome was collected in the month of April – June from local areas of Sikkim Himalayan region of lower hills in a high altitude. The plant species were identified with the help of standard literature 1 and they were authenticated at Botanical survey of India, Gangtok, Sikkim. About 700 gm of the air-dried powdered plant material was extracted by continuous hot percolation method in Soxhlet apparatus with different solvents, starting from petroleum ether (60-80°c) followed by benzene, chloroform, acetone, methanol, ethanol and water. Each time before extracting with the next solvent, the powdered material was air dried below 50°C, each extract was concentrated by distilling off the solvent and evaporating to dryness on water bath. The extracts were subjected for phytochemical screening.  The ethanolic extract (yield 2.35%) was investigated for its anti-fertility activity.

Phytochemical Studies: The extracts were subjected to phytochemical screening and the results are represented in the table no. 1. 3, 4

Animals: Healthy Wister albino rats weighing 180-190g of either sex were used for the study. The animals were procured and housed in the animal house of Himalayan Pharmacy Institute, Sikkim at least 1months prior to the study, so that animal could adapt to the new environment. Animal house was well maintained under the standard hygienic conditions, at a temperature (22 ±20c), room humidity (60 ± 10%) with 12 hrs day and night cycle, with food and water ad libitum. Rats were housed in groups of 4 per cage. Cleaning and sanitation was done on alternate days. The cages were maintained clean.

Antifertility Activity: Anti-implantation method was used to evaluate the anti-fertility activity of Curcuma aromatica. Each group comprised of 6 rats each.

Anti-implantation activity was determined following the method of Khanna and Chaudhury 5. Female rats showing regular estrous cycles were selected on the basis of 2 consecutive cycles. They were then paired with males of proven fertility in the ratio of 2:1, until the vaginal smear indicated positive mating. The day of mating was considered as day 1 of pregnancy for each female rat. This was indicated by the presence of thick clumps of spermatozoa in female vaginal smear. Mated female rats were assigned to control an experimental group randomly until each group consisted of six animals.

The animals were administered with the alcoholic and aqueous extracts of the drug at two dose levels each. The standard group was administered Ethynyl oestradiol 0.45 mg/kg body weight. All the drugs were administered orally using feeding needle. The rats were dosed for 8 consecutive days and autopsied on the 10th day of pregnancy under light ether anesthesia and semi sterile conditions. The uteri were examined to determine the number of implantation sites.

The extracts obtained by successive solvent extraction were subjected to preliminary phytochemical analysis, which revealed the presence of phytosterols, saponins, alkaloids, gums and mucilage. In the present study the ethanolic and aqueous extracts of Curcuma aromatica were tested for its antiimplantation activity. The rats were examined for their estrous cycle (Fig.1) and for the presence of Spermatozoa (Fig.2). Table2. reveals that the ethanolic and aqueous extract of Curcuma aromatica at two different dose of 200 mg/kg and 400 mg/kg of body weight prevented the pregnancy.  The aqueous extracts were found to possess more significant antifertility activity compared to alcoholic extract. Whereas the ethanolic extract at the lower dose of 200mg/kg showed more reduction in implants as compared to the higher dose of 400mg/kg. 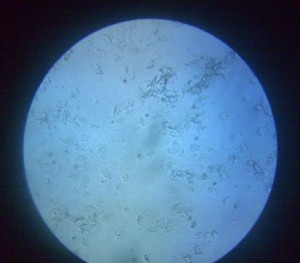 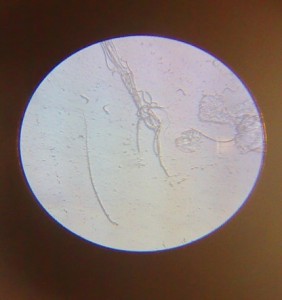