ABSTRACT: Oxidative stress is a condition due to excessive production of free radicals than the ability of the antioxidant system to counteract them. Antioxidants scavenge and suppress the deleterious effects of free radicals. Both exogenous and endogenous sources of antioxidants are important in pathological conditions. Exogenous antioxidants include dietary sources and even include medicinal plants. These medicinal plants contain phytochemicals which contribute to the beneficial antioxidant activity. Wheat germinated over a period of 9-10 days is generally called wheat grass. The purpose of this work is to determine the phenolic, flavonoids, flavonols and total alkaloids from wheat grass juice. Free  radical scavenging activity of wheat grass juice was evaluated by using DPPH , nitric oxide, hydroxyl radical and total antioxidant power by FRAP assay and antilipidperoxidation activity by using mice liver and brain. Wheat grass juice is found to have good antioxidant action in various models due to its polyphenols and phytochemicals.

INTRODUCTION: Oxidative stress in human beings is a condition when the sensitive homeostasis between free radicals and antioxidants is disturbed. This is due to excessive production of free radicals than the capacity of antioxidants to counteract on them 1.

The radicals are capable of damaging macromolecules and cause various human diseases such as neurodegenerative disorders, cardiovascular diseases, diabetes mellitus and different forms of cancer.

The consumption of wheat grass in the Western world started in 1930s, as a result of experiments by Charles F. Schnabel in his attempts to popularize the medicinal plant. The usage of wheat grass juice for therapeutic purpose was developed and popularized by Dr. Ann Wigmore (1909 – 1996) U.S.A, founder- director of Hippocrates Health Institute, Boston, U.S.A. It is reported to be safe and effective for the treatment of cancer, rheumatoid arthritis, ulcers, diabetes, gastritis, fatigue, anemia, asthma, eczema, hemorrhoids, skin problems, body odour, constipation and even high blood pressure 4, 5. Wheat (Triticum aestivum L.) belongs to family Gramineae. It is considered as important component of human diet, particularly in developing countries. Wheat germinated over a period of 9-10 days is generally called wheat grass. Thus, wheat grass refers to the young grass of common wheat plant. It is rich in chlorophyll, amino acids, minerals, vitamins and enzymes 6.

The aim of the present study is to evaluate the phytochemicals, reducing power, antioxidant activity and in – vitro lipid peroxidative capacity of wheat grass juice.

25grams of wheat grains were allowed to germinate for a period of 9 days in soil, under normal conditions. On 10th day the green leaves obtained were collected. The wheat grass juice was obtained by crushing the green leaves in 100 ml of double distilled water and subjected to double filtration in order to collect the fresh filtrate for use and remove uncrushed insoluble matter. The fresh filtrate was further diluted with distilled water so as to obtain a concentration of 250 μg/ml and the various aliquots were used for the further experiments as wheat grass juice.

The wheat grass juice  was subjected to preliminary phytochemical analysis of total phenolic compounds, flavonoids, flavonols by methods described earlier by the authors Padmanabhan and Jangle; 2012 7 “a” . The  DPPH ,nitric oxide  and hydroxyl radical scavenging activity The total  antioxidant activity by FRAP assay, reducing property was determined, by the methods described by authors Padmanabhan and Jangle; 2012 7 “b”.  The anti lipid peroxidation of wheat grass juice was carried out in mouse liver as well as in brain homogenate of D-galactosamine induced hepatic damage (Padmanabhan and Jangle ;2014) 8  The 10% liver homogenate was centrifuged at 3000 rpm for 10 minutes and the supernatant obtained was used. 0.5 ml of the supernatant obtained from liver homogenate was added to 0.5 ml saline in a series of test tubes to which wheat grass juice was added in concentration ranging from 50μg/ml to 250μg/ml. The mixture was incubated for 15 minutes at 37°C. 10% trichloroacetic acid was added to stop the reaction.

The tubes were centrifuged at 3000 rpm for 20 minutes and the entire supernatant obtained was treated with 0.25 ml 1% thiobarbituric acid in 0.2 N NaOH. Further, the tubes were subjected to boiling for one hour at 95˚C. Thereafter the tubes were cooled to room temperature. The absorbances were measured on spectrophotometer at 532 nm. TBARS were estimated by the method of Fraga et al (1984)9. The 10% brain homogenate in phosphate buffer pH 7.4 was centrifuged at 3000 rpm for 10 minutes and the supernatant was used. 0.25 ml of supernatant of brain homogenate was taken in a series of test tube to which wheat grass juice was added in a concentration range of 50μg/ml to 250μg/ml. Further 0.05 ml of 15mM ferrous ammonium sulphate was added to enhance lipid peroxidation. All the test tubes were incubated for 30 minutes at 37˚C in a water bath.1 ml of 10% trichloroacetic acid was added and centrifuged for 20 minutes at 3000rpm. The entire supernatant obtained in each test tubes were treated with 1 ml of 0.8g/dl thiobarbituric acid and kept at 100˚ C for 20 minutes. The test tubes were allowed to cooled and thereafter centrifuged and the absorbances of the supernatants were measured on spectrophotometer at 530 nm. 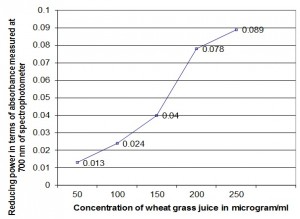 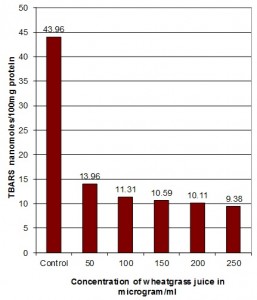 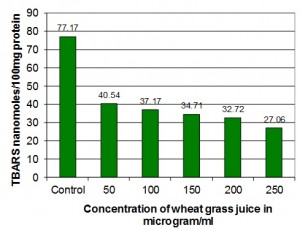 The ferric reducing power of wheat grass juice was dose dependent as per Table 2. Such observations was reported by Durairaj (2014) 1. Our observation is in line with this. Thus FRAP assay of antioxidant activity may be referred analogously to total reducing power.

Duh et al (1999) 15 reported that polyphenols are directly related for contribution to antioxidant action. Antioxidants are specific to the various species of reactive oxygen16.

The various degrees of inhibition of various oxidants observed due to various scavenging models used in this study. Some of the antioxidants may directly interact with superoxide, hydroxyl radicals, singlet oxygen quencher or can act directly as reducing agent or hydrogen donor 17. Hamberger and Hustettman (1991) 18 are of opinion that the crude extracts of plants are pharmacologically more active than their isolated active principles due to the synergistic effects of various phytochemicals like alkaloids, flavonols etc present in the whole extract.

Thus, the wheat grass juice rich in phenolic compounds, flavonoids, flavonols and alkaloids is having antioxidant activity no wonder that has large therapeutic potential in prevention and treatment of chronic diseases Singh et al (2012) 5.