ABSTRACT: Objectives: The study was aimed to evaluate and analyse the drug promotional literature distributed by pharmaceutical companies to physicians. This was done using World Health Organization (WHO) criteria for ethical medicinal drug promotion and International Federation of Pharmaceutical Manufacturers & Associations (IFPMA) Code of Practice, 2012.  Detailed analysis of claims was done. Material and Method: An observational cross-sectional study was carried out in OPD of a tertiary care hospital. A total of 194 brochures were collected and evaluated according to the WHO criteria and IFPMA Code of practice, 2012. Further claims were categorised and detailed analysis of exaggerated and false claims was done and the authenticity of the brochures was checked. Results: None of the brochures gave complete information in accordance to the WHO and IFPMA Code of practice, 2012. Majority of the claims were about efficacy (77.31%) and safety (13.91%). Seven of them were exaggerated and false. Conclusion: The study concluded that the drug information provided in the promotional brochures can be incomplete and unreliable with the questionable credibility. Hence a physician should not rely solely on the brochures. They must undergo a strict process of assessment regarding information provided, especially related to efficacy and safety.

INTRODUCTION: “Pharmaceutical product” means all pharmaceutical or biological products (irrespective of patent status and/or whether they are branded or not) which are intended to be used on the prescription of, or under the supervision of, a healthcare professional, and which are intended for use in the diagnosis, treatment or prevention of disease in humans, or to affect the structure or any function of the human body. 1

“Promotion” means any activity undertaken, organized or sponsored by a member company which is directed at healthcare professionals to promote the prescription, recommendation, supply, administration or consumption of its pharmaceutical product(s) through all methods of communications, including the internet. One of the well-known promotional activities of pharmaceutical industries is to produce advertising brochures and leaflets. 1

The literature promoting the drugs and distributed by the drug company representative is an important source of seeking information for the busy medical practitioner. Physician targeted promotion through medical representatives is one of the most common tactic for drug promotion by pharmaceutical drug companies 2. Numerous studies have shown that the literature is persuasive in nature rather than educational. 3 It is very important that promotional literature presenting the research findings should provide all information so that the validity of the literature can be ascertained by the physicians. For a better understanding and potential utilization of new drugs on patients, it is very important for a physician to critically analyse research findings and draw conclusions as misleading and wrong information is not uncommon in the literature used for drug promotion. But at times such literatures are inaccurate and of poor educational value. This could also lead to prescribing of more expensive products where cheaper alternatives are available. This may also lead to patient suffering unnecessary adverse effects. These promotional activities create the potential for inappropriate prescribing practices by influencing physicians’ prescribing behaviour without necessarily benefiting the patients but contribute to increased health care costs. 4, 5  Hence the information available to prescriber should be authentic, unbiased and complete in order to enable him to select and use the drug appropriately in a given patient.6

Methodology: After taking approval from Institutional Review Board (IRB), an observational cross sectional study was conducted in OPD of tertiary care hospital at Ahmedabad, Gujarat. Promotional drug literature in the form of brochures were collected randomly from OPDs of Medicine, Surgery, Psychiatry, Obstetrics, Gynaecology, Paediatrics, Dermatology, ENT, Endocrinology, Cardiology, Ophthalmology, Nephrology & Urology, Neurology, Oncology and Orthopaedics. A total of 194 brochures were collected within 2 months which was followed by evaluation of the brochures according to the WHO criteria for ethical medicinal promotion.

According to the criteria, following information should be mentioned in a promotional literature:

According to IFPMA code of practice 2012, all printed promotional materials must include:

All the brochures were evaluated accordingly and the data was entered in a Microsoft Excel sheet which was then analysed. In addition to this information, promotional materials make various claims about the medicinal products presented in it. Claims made in the promotional brochures were classified into following six categories like:

RESULT: A total of 194 brochures were evaluated. The authors’ self-designed a grading system to grade these brochures. 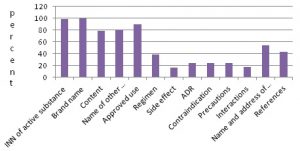 FIG. 1: PERCENTAGE OF PROMOTIONAL DRUG LITERATURE MEETING THE WHO CRITERIA

Claims: One more thing was found in promotional drug literature was presence of claims related to the drug. The claims were analysed using standard Reference books and Textbooks of pharmacology. (Table 2)

Most of the claims were made about efficacy and safety which constitute of 91.23% of the total brochures. Very few of them claimed about cost, convenience, pharmacokinetics & pharmaceutical properties.  Also, detailed analysis of claims was done (Table 4).

TABLE 2: CLASSIFICATION OF BROCHURES BASED ON NO. OF CLAIMS

TABLE 3: CLASSIFICATION OF BROCHURES BASED ON THE TYPE OF CLAIMS

TABLE 4: DETAILED ANALYSIS OF THE CLAIMS

DISCUSSION: Pharmaceutical marketing, sometimes called medico-marketing or pharma marketing in some countries is the business of advertising or otherwise promoting the sale of pharmaceuticals or drugs. Pharmaceutical companies use various ways for promotion like brochures, medical representatives, advertisement, online promotion etc.

In an ideal world, physicians would learn all they need to know about drugs from medical literature, and good drugs would thereby sell themselves but we are a long way from ideal. The amount spent on promotion of drugs approximates or perhaps even exceeds that spent on research and development.1 There are many Code of practices 10 developed for ideal drug promotion but the drawback is they are not followed by the pharmaceutical companies and they have been vulnerable to criticism for some of their marketing practices.

The information provided for drug promotion should be accurate, scientific and evidence based to keep the physicians well informed.11 But it is a known fact that the promotional practices carried out by pharmaceutical industries are persuasive in nature. The commercial sources of drug information should be complete with respect to all information pertaining to the drug because it has a great impact on the prescribing behaviour. 12

The inaccurate and incomplete information provided by these literatures may mislead clinicians in the selection of drug therapy for their patients. The ultimate goal of medical practice is to ensure the care, cure and safety of the patient. 13 Development of laws and their implementation by drug manufacturers, practitioners’ awareness and strengthening of existing guidelines can be beneficial measures in the issue. 14

In this study, a total of 194 brochures collected for a tertiary care hospital were evaluated. After evaluation of all the brochures, it was established that none of the brochures contained complete information according to the WHO criteria.

Claims were also categorized. In our study it was noted that majority of the brochures (61.3%) had atleast one claim. Most of the claims were based on efficacy (77.31%). These claims are basically highlighting the superiority of the pharmaceutical product. This is comparable to a similar study by Gurpreet et al, where claims related to efficacy were found in 70% of the brochures.18 Claims related to safety claims were found in 13.91% of the total brochures. These safety claims in an ideal environment should be well supported by reliable, retrievable references.

Pharmaceutical companies are known to highlight the positive aspects of their products while hiding the medical aspects. This can be compared to a similar study by Mali et al where safety claims were mentioned in 37.2% of the brochures.4

As far as the detailed analysis of the claims was concerned, they were categorised as exaggerated or false claims. A total of 7 such claims were identified by the authors. The first exaggerated claim dealt with Timolol as the first line drug for chronic open angle glaucoma. This claim had been correct if it was said 10 years back. With the current scenario, this claim is an exaggeration because the PG analogues are more efficacious, cost effective and have less systemic side effects.

The third exaggerated claim focused on Chlarithromycin being the first line macrolide for skin and soft tissue infections and infection by atypical microorganisms. This is exaggerated because azithromycin and erythromycin also have the same spectrum. The other exaggerated claim dealt with tamoxifen being better for induction of ovulation in comparison to clomiphene. Tamoxifen may be useful in this condition but it has side effects like hot flashes and endometrial carcinoma which can arise from repeated use.

On analysis of false claims, the first one dealt with Multivitamin as memory enhancers. This claim is unsubstantiated. The other false claim which was identified was Telmisartan with Chlorthalidone combination claiming to be reducing the total cholesterol, triglyceride and LDL. This claim is false since the Chlorthalidone component in this combination is known to worsen the lipid profile.

The last false claim was observed claiming Montelukast and Fexofenadine combination to be cardio safe. This is also not true since Fexofenadine can cause QT interval prolongation and rare cardiac syndrome Churg- Strauss is associated with Montelukast. (Table 4)

On analysis of these claims, many of them being exaggerated or false, a mechanism has to be generated in our country to monitor the drug promotional campaign by pharmaceutical companies.

In India, such regulations need to be strengthened. On the other side till the improvement s are done physicians who are the prescribers should not rely solely on the promotional brochures. They should go for reliable sources of drug information and follow evidence based information regarding prescribing of drugs.

Our study had the following strengths, it being the first study at our setup of a tertiary care hospital. The promotional drug brochures were compared to 2 standard guidelines, the WHO criteria and IFPMA Code of practice 2012. Our study also showed detailed analysis of false and exaggerated claims.

CONCLUSION: The study concluded that the drug information provided in the promotional brochures can be incomplete and unreliable with the questionable credibility. Hence a physician should not rely solely on the brochures. This becomes all the more relevant in case of resident doctors who have less experience with the medicines and take the message of the brochure as an authentic content. All brochures circulated among prescribers must undergo a strict process of assessment regarding information provided, especially related to efficacy and safety. Further advertisements which do not confirm with the standard guidelines should not be allowed to be circulated. This pilot study is successful in highlighting the areas which need improvement as far as promotional brochures are concerned.

CONFLICTS OF INTEREST: none

ACKNOWLEDGEMENT: I would like to convey sincere thanks to Dr. Pankaj Patel Dean Smt. NHLMMC for allowing me to conduct the study.