ABSTRACT: Herbal plants are effective in the treatment of various diseases.  More or less they are unscientifically and improperly used. These plants deserve detailed studies in the light of modern medicine. Having  detailed  investigation  and  documentation   of herbal plants  used  in local   health traditions   and  after that doing  pharmacological  evaluation  of these  plants  and  their taxonomical   classification  can lead  to the  development  of  valuable  plant  drugs  for  many  diseases. In the present  study, the renal effects  of  hydro-alcoholic extract  of Portulaca  oleracea (whole  plant)  were  evaluated  by performing  the kidney  function  tests.  Firstly the hydro-alcoholic extract of the plant was made.  Rats were made diabetic by a single dose of 120 mg/kg b.w.  After observing them for 72 hours, the blood glucose levels were checked. The  rats  having  blood  glucose  levels  above  200 mg/dl  were  taken  for  the  study.  The extract was first subjected to preliminary phytochemical screening.  The doses taken were 100 and 200 mg/kg b.w. Phytochemical screening showed the presence of many plant constituents. The effect of the extracts on kidneys was evaluated, which showed variable results.

INTRODUCTION: Diabetes mellitus is a very common metabolic disease in the world today, affecting at least 15 million people. It has associated with long term complications, including retinopathy, nephropathy, neuropathy and angio-pathy and several others 1. It is a multifactorial disease characterized by hyperglycemia, lipoprotein abnormalities, raised basal metabolic rate, defect in reactive oxygen species scavenging enzymes and high oxidative stress induced damage to pancreatic beta cells 2.  In India    there  has been  more  than  4.00  crore  diabetics  and  the number  will  increase to  be  around  9.00  crore  by  2030.

Efforts are taken to understand and manage diabetes mellitus because disease related complications are increasing day by day.  In India there are 45,000 plant species and many of them have medicinal properties 3 - 12. About 800 plant species have shown anti- diabetic activity. People have shown great demand for plant products due to low cost, easy availability and lesser side effects. For this plant materials are continuously scrutinized and explored for their effect as antidiabetic agents.

Therefore, with the reference to traditional and reported uses, the present study was undertaken to investigate the renal effects of this plant in alloxan induced diabetic rats and give a scientific rational for its use.

Plant   Material:  The   whole plant of Portulaca oleracea was collected from Shalimar area of the district, Srinagar. The plant  was   collected   during the months of  April  to June   and  authenticated  by  a  plant  taxonomist in the  Centre  of Plant  Taxonomy,  University  of    Kashmir,  Srinagar.

A sample of this plant material was deposited in the herbarium of the Department of Taxonomy, University of Kashmir under voucher specimen number 1012(KASH)    for   future   reference. This  plant  material  of Portulaca oleracea was  dried,  kept   in a  well  ventilated  room  with  outside  temperature  ranging  between  18 – 32 °C .

Preparation of the Extract: The  whole  plant  of  Portulaca oleracea   was  coarsely  powdered  and   500 gm  of the  material was   macerated  for  48 hrs  with  50 %  ethanol, with  occasional  shaking. After 48 hrs, this extract was filtered through Whatmans filter paper. The plant material was then macerated again with fresh 50 % ethanol. The    filtrate obtained was then combined and the solvent was recovered. After  the  recovery  of  alcohol,  the  extract  was  then  evaporated  to   dryness. The   yield was noted. The plant extract was refrigerated at 4°C for future use in experimental studies.

Animals: Albino rats of either sex were used during the study weighing about 180-210 g with good health. The animals were procured from Central Animal House, IIIM (Indian Institute of Integrative Medicine) Jammu. These animals were housed in clean polypropylene cages. Before initiation of experiment, they were acclimatized for a period of 7 days. Standard environmental conditions such as temperature ranging from 18 – 32°C, relative humidity (70%) and 12 hrs dark/light cycle were maintained in the quarantine. The animals were fed with rodent pellet diet (Ashirwad Industries) and water ad libitum under strict hygienic conditions.

All procedures were  performed  in accordance  to  CPCSEA guidelines after  approval  from   the  Institutional  Animal   and  Ethics  Committee ( IAEC)   of  the  Department  of pharmaceutical  sciences, University of  Kashmir [No. F-IAEC (Pharm. Sc) Approval/2008/4 Dated Oct 23rd, 2008].

Induction of Diabetes: Alloxan monohydrate was used to induce diabetes mellitus. A single  dose (120 mg/kg, b.w, i.p)  of alloxan  monohydrate   in  sterile  saline  was used  for the induction  of   diabetes  in rats  after  overnight   fasting. After one hour of alloxan administration, the animals were fed standard pellets and water ad libitum. After  5 days of alloxan  administration, the  animals  which showed  blood  glucose  levels  above  250  mg/dl  were used for the study. Hydro-alcoholic extract  of  the plant Portulaca  oleracea (PO)  was  administered  at two  dose  levels  100  and 200 mg/kg b.w.

Experimental Design: These albino rats were fasted overnight for 12 hrs. They were randomly divided into 5 groups of 6 rats per group. The various groups were:

Group I   Normal control and received only 0.2 ml of 2 % aqueous gum acacia

The treatment  with hydro-alcoholic   extract   of  Portulaca  oleracea  was started on the same day except normal control and diabetic control groups which received only  0.2 ml of 2 % aqueous gum acacia  for a period of 10 days. The animals in all groups had free access to standard diet and water during this period.  Body weight and blood glucose levels were estimated on 1st, 4th, 7th and 10th day of the treatment. The renal effects were observed at the end of the experiment.

Estimation of Biochemical Parameters: 35 - 37 On the 10th day, blood of these animals was collected from overnight fasted rats under ether anesthesia by cardiac puncture.  It was kept aside for 30 min for clotting. By centrifuging the same sample at 6000 rpm for 20 min, the serum was separated and was analyzed for blood glucose, serum urea levels, serum creatinine levels and serum total protein levels.

Principle: Glucose is oxidized to gluconic acid and hydrogen peroxide in the presence of glucose oxidase. Hydrogen peroxide further reacts with phenol and 4-aminoantipyrine by the catalytic action of peroxidase to form a red coloured quinoneimine dye complex. Intensity of the colour formed is directly proportional to the amount of glucose present in the sample.

Principle: Urease splits urea into ammonia and carbon dioxide. Ammonia released in this reaction reacts with hypochlorite and phenolic chromogen to produce green colour. The absorbance of this green colour at 578 nm. (570 - 620) is directly propotional to the concentration of urea in specimen.

Principle: Creatinine in alkaline medium reacts with picrate to produce orange colour. This colour absorbs light at 492 nm. (490 - 510 nm). The rate of increase in absorbance is directly propotional to the concentration of creatinine in specimen.

Calculation: Calculate the average change in absorbance per minute (Abs.) of standard and specimen.

Principle: Proteins, in an alkaline medium, bind with the cupric ions present in the biuret reagent to form a blue-violet coloured complex. The intensity of the colour formed is directly propotional to the amount of proteins present in the sample.

Statistical Analysis: All the values are expressed as mean + SEM. The results were subjected to statistical analysis using one-way ANOVA followed by students t-test. p<0.001 was considered     very highly significant.

Weight of the extract obtained = 385 gms

% age yield of the hydro-alcoholic extract = 14%

Antidiabetic Activity: The blood glucose levels  showed  a  highly  significant  decrease  in  groups  III, IV and V   (p < 0.01) when  it was  compared   to  group II  (Diabetic control). There was a highly significant increase in blood   glucose   levels seen in diabetic group as compared to normal control group I (p< 0.01). (Table 2, Fig.  1)

Alloxan monohydrate (120 mg/kg) was administered i.p, in sterile saline, single dose, 5 days before the administration of different ethanolic extracts.  Standard drug, Glibenclamide and the plant given in two doses as hydro-alcoholic extracts in 2 % gum acacia were administered orally for 10 days, in a single dose daily five days after confirmation of hyperglycaemia. 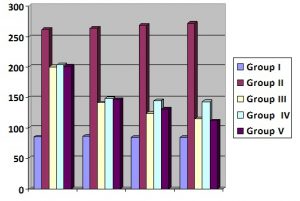 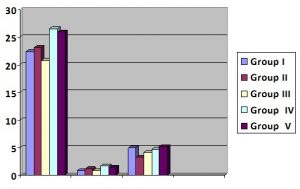 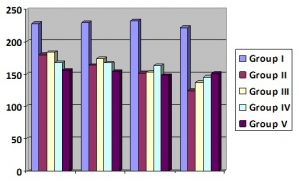 DISCUSSION: Pancreas being the primary organ of the body is involved in sensing the organism’s dietary and energetic states through glucose concentration in the blood and in response to elevated blood glucose, insulin is secreted. There are different chemicals for inducing diabetes like alloxan and streptozotocin 38. Alloxan is used for the induction of diabetes mellitus apart from streptozotocin. Having a destructive effect on the beta cells of the pancreas, alloxan causes a massive reduction in insulin release by the destruction of beta-cells of the islets of Langerhans thereby inducing

hyperglycemia. Insulin deficiency leads to various metabolic alterations in the animals viz increased blood glucose and increased lipid profile. Diabetes mellitus is a disorder characterized by resistance in the action of insulin, insufficient insulin recreation or both. Herbal plants have received greater attention as an alternative to conventional therapy. The demand for these remedies has currently increased. Experimental screening method is imperative in order to establish the safety and efficacy of traditional and herbal products and also to set up the active components of the herbal products. The Indian indigenous drugs have great importance both from professional and economic point of view. A large number of plants have been reported to possess anti-diabetic activity e.g., Aconitum napeilus, Aloe vera, Carum carvi, Cichorium intybus, Allium cepa, Aralia cachemirica, Allium sativum, Momordia charantia.

Rats which weighed in the range of 180 - 210 g were procured from IIIM Jammu. They were kept in polypropylene cages under uniform conditions of food, water, temperature and degree of nursing care. It was ensured that the animals were in good health. Male and female animals were kept in separate cages so that there was no interference in evaluation of biochemical parameters during the period of study. The temperature and the humidity were in the range of 15 – 25 °C and 70 - 75 % respectively. The phytochemical investigation of  hydro-alcoholic extract of whole plant  of Portulaca oleracea carried out by standard procedures revealed the presence of alkaloids, flavanoids, glycosides, terpenes, saponins, carbohydrates, proteins, tannins, phenolics and steroids.

CONCLUSION: It has been concluded that the hydro-alcoholic extract of Portulaca oleracea has beneficial effects on blood glucose levels. Further studies on pharmacological and biochemical invest-tigations will clearly elucidate the mechanism of action and will help in projecting this plant as a therapeutic target in diabetics research and its effect on various complications of diabetes mellitus.

ACKNOWLEDGEMENT: We are highly thankful to Sri Krishna Drugs Ltd., C - 4 Industrial Area Uppal, Hyderabad for providing a free gift pure sample of Glibenclamide which was used as standard anti diabetic drug and also to University Grants Commission for financial assistance. The facilities provided by the Department of Pharmaceutical Sciences University of Kashmir for carrying out this work also need appreciation.