ABSTRACT: Adiponectin has been schown to protect from insulin resistance, demonstrate anti-inflammatory and anti-atherosclerotic effects and be involved in the pathogenesis of metabolic syndrome (MS). We aimed to assess the  association between serum adiponectin concentration, insulin resistance and various risk factors of MS and to investigate the relationship between the single nucleotide polymorphism (SNP) +45 T>G ( rs 2241766) in the adiponectin (ADIPOQ) gene and the risk of MS. 200 patients with MS and 250 healthy controls were enrolled in this study. The level of fasting serum insulin, glucose, and lipid levels were measured. Insulin resistance was estimated using homeostasis model of assessment for insulin resistance (HOMA-IR). Serum adiponectin levels were measured by enzyme-linked immunosorbent assay and the SNP +45 T>G in the ADIPOQ gene was performed by the polymerase chain reaction-restriction fragment length polymorphism method. MS patients had a significantly higher levels of HOMA-IR (p<0.001) and lower serum adiponectin concentrations (p<0.001) compared to controls. Multiple regression analysis showed that serum adiponectin levels was associated negatively with HOMA-IR (r=-0.307; p=0.001) and positively with high-density lipoprotein cholesterol (HDL-C) (r=0.369; p=0.000) in MS patients. In addition, there was no significant association between genotypes of rs 2241766 and the risk of MS. In conclusion, adiponectin is known to play key regulator of insulin sensitivity, endothelial function and lipid metabolism. Our findings confirm the associations of hypoadiponectinemia with MS and gave evidence that the SNP+45 T>G polymorphism in the gene of ADIPOQ is not associated with MS.

INTRODUCTION: Insulin resistance is an important factor in the development of metabolic syndrome (MS), the complex disorder characterized by abdominal obesity, hypertension, dyslipidemia and increased plasma glucose. The MS has been widely associated with incident type 2 diabetes (T2D) and cardiovascular diseases (CVD) 1, 2. Development of the MS is influenced by genetic and environmental factors and their interaction with each other 3, 4.

Adipose tissue has been recognized as an important endocrine organ, secreting a variety of adipokines, which are involved in the regulation of energy homeostasis and insulin sensitivity 5. Adiponectin, the most abundant adipocyte secreted hormone in blood, is termed a “beneficial” adipokine due to its anti-inflammatory, anti-atherogenic and anti-diabetic effects 6, 7.

Conversely, hypoadiponectinemia is associated with T2D, MS, obesity and insulin resistance, while functional studies in animal models have shown that increased adiponectin levels by supplementation of adiponectin attenuates insulin resistance by reducing the triacylglycerol content in muscle and liver 8. Moreover, serum adiponectin concentrations are negatively correlated with triglycerides (TG) and positively with high-density lipoprotein cholesterol (HDL-C) 9, 10.

ADIPOQ gene which encodes adiponectin is located on chromosome 3q27 11. It consists of three exons and two introns spanning a 16 Kb 12. In this region, genome-wide scans have mapped a susceptibility locus for T2D, coronary artery disease, insulin resistance and MS 11-16. Several single nucleotide polymorphisms (SNP) at this locus have been reported individually or in combination as haplotypes and the most commonly studied are rs17300539 (-11391G>A) and rs266729 (-11377C>G) in the promoter region and rs2241766 (+45T>G) and rs1501299 (276G>T) in exon 2 and intron 2, respectively 17. SNP +45 T > G is a synonymous mutation (GGT→GGG, Gly15Gly) at exon 2 and Yang et al. revealed that  this T/G substitution may affect expression of adiponectin by affecting RNA splicing and stability18. Others studies showed that the G allele of SNP +45 T > G has an association with T2D, insulin resistance and MS in several populations even though the findings have been controversial. However, little is known about association of SNP +45 T>G (rs2241766) with CVD.

Therefore, the aim of this case-control study is, in one hand, to evaluate the relationship between  SNP +45 T>G in the adiponectin gene and the risk of MS, and, in the other hand, is to investigate the possible association between circulating total adiponectin levels with insulin resistance and biochemical parameters in Tunisian patients with MS.

Study population: This study included 450 participants (200 subjects with MS and 250 others without MS) who are volunteers from external consultations from dispensary Kalaa Kebiraa, Sousse Tunisia. These subjects had no past history of CVD, no history of prescribed medicine. The main exclusion criteria were: pediatric study populations, age > 90 years old, several renal failures, an acute infection, thyroid problem or heart disease. This study was approved by the local Ethics Committee of Farhat Hachet Hospital of Sousse, Tunisia, in accordance with the Declaration of Helsinki.

Definition of Metabolic Syndrome: MS was defined clinically, based on the presence of three or more of the five following components according to the National Cholesterol Education Program Adult Treatment Panel III (NCEP ATPIII) criteria: abdominal obesity (defined as waist circumference ≥ 102 cm for men and ≥ 88 cm for women); TG ≥ 150 mg/dl (1.7 mmol/l); HDL-C < 40 mg/dl (1.03 mmol/l) in men or < 50 mg/dl (1.29 mmol/l) in women; fasting glucose ≥ 100 mg/dl (5.6 mmol/l) or medication for diabetes; and blood pressure ≥ 130/85 mmHg or on antihypertensive medication19.

Anthropometric measures and blood pressure: After obtaining a consent agreement from participant, weight and height were measured. Waist circumference (WC) was measured midway between the lowest rib and the iliac crest on standing subjects. Body Mass Index (BMI) was calculated as weight (kg) divided by height2 (m). Arterial blood pressure was measured in participant rested and seated for at least 5 minutes using an automated blood pressure monitor.

SNP 45 T/G genotyping: Genomic DNA was extracted from peripheral blood using standard salting-out procedure. Genotyping of SNP 45 T/G in the study population (450 individuals) was performed using polymerase chain reaction-restriction fragment length polymorphisms (PCR-RFLP). the PCR procedures were performed using a 18 μl reaction volume containing: 3.6 μl of 5X buffer (50 mM KCl, 20 mM Tris-HCl, pH 8.4), 0.72 μl of 25 mM MgCl2, 0.36 μl of 10 uM of each allele specific primers [sense primer (5’ GATCAAGGTGGGCTGCAATA 3’) and antisense primer (5’ AGTCGTGGTTTCCTGGTC AT 3’)], 0.36 μl of 20  mM dNTP, 0.09 U of Taq DNA polymerase (Promega) and 1 μl of 100 ng of template DNA and water. Briefly, the PCR for the SNP 45 T/G in the adiponectin gene consisted of a 5-minute-denaturation step at 94°C followed by 35 cycles at 94°C for 30 s, 51° for 30s, 72°C for 30 s, and a final extension at 72°C for 7 min.  The PCR products we digested overnight with 2 units of AvaI (Jena Bioscience GmbH, Germany) at 37°C and separated on 3% agarose gels. RFLP bands were visualized under UV light with ethidium bromide staining. The Adip TT genotype was expected to show a single band (246 bp) whereas GG genotype was expected to show two DNA bands at the positions of 220 bp and 26 bp, and the heterozygote  +45T/G was expected to have three bands (246 bp, 220 bp and 26 bp).

Statistical evaluation: The statistical package for the social sciences (SPSS) version 20 for Windows (SPSS Inc., Chicago, IL, USA) was used for the statistical analysis. Parametric data are expressed as the mean ± standard deviation. Means were compared using the Student test for independent samples. The relations between variables were assessed with Pearson's and Spearman correlations analysis. A P value ≤ 0.05 was considered as significant. 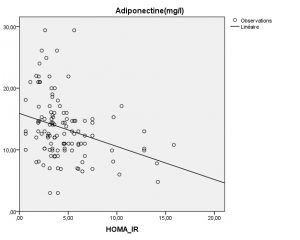 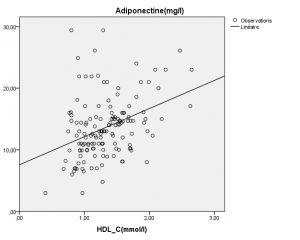 Hypoadiponectinemia has been demonstrated to be associated with the insulin resistance, obesity, diabetes and MS. Furthermore, several studies demonstrated the important role of adiponectin in the regulation of others physiological processes, including lipid metabolism, endothelial function, inflammatory response and cytokine signalling 28. Dyslipidemia is known as a major risk factor of insulin resistance and MS. Among several proposed lipid markers, TG and HDL-C are key metabolic abnormalities in patients with insulin resistance and a positive correlation between circulating adiponectin levels and HDL-C concentration has been indicated from various studies 9, 10, the same correlation was found among our cases. Indeed, according to other study 29, there is an inverse relationship between adiponectin levels and TG levels and hypertriglyceridemia is often associated with prevalence diseases, such as diabetes, CVD and MS 30. The MS is a cluster of cardiometabolic alterations that include the presence of high blood pressure, insulin resistance, dyslipidemia, and abdominal obesity 31.

Obesity is commonly associated with inflammatory response, characterized by abnormal adipokine production, and the activation of proinflammatory signalling pathways resulting in the induction of several biological markers of inflammation 32. HsCRP, marker of low-grade chronic inflammation, has been associated with hypertension, central obesity and other components of the MS 33.

Although adiposity is closely related to inflammation, it is thought that insulin resistance and inflammation are the main components of MS and CVD 34, 35. In our study, the concentrations of hsCRP were higher in subjects with MS than those without MS.

Adiponectin promotes fatty acid oxidation and glucose uptake and has shown strong anti-inflammatory and antiatherogenic effects 6, 7, 36. This characteristics and the serum levels and of adiponectin are regulated by gene expression, and analysis of the adiponectin gene sequence reveals a large number of SNPs. In recent years, there have been many reports about the association between adiponectin SNPs and various diseases. Although previous studies have examined the role of adiponectin SNPs in obesity, T2D and CVD11-15, 37.

In this study, we did not find a significant association between the +45 T>G (rs2241766) in the ADIPOQ gene and MS in Tunisian population. Our results are similar to those of others study in different ethnic populations 38, 39. However, the association of SNP +45 T>G with T2D, insulin resistance and obesity both in healthy individuals and T2D patients, has been investigated in several populations including the Tunisian ones 12, 14, 40-42. Interestingly, polymorphism +45T>G showed a strong association with body adiposity in diabetic women. Such an association is consistent with the autocrine function of adiponectin in regulating fat accumulation at adipose tissue 43.

Some main limitations of our study merit consideration. First, this study should be supported by further studies with larger populations. Second, we tested only one SNP of ADIPOQ gene that limited the possibilities to examine a wide range of haplotype combinations. Third, our analyses were based on a measurement of total concentrations of serum adiponectin while in human plasma, adiponectin circulates in trimeric, hexameric and oligomeric forms which might be responsible for adiponectin insulin sensitizing effects 44.

In conclusion, we investigate that reduced adiponectin levels may play an important causal role in the development of insulin resistance and MS as defined by the NCEP ATP III criteria.

Thus, the progress of adiponectin analogues holds great promise for clinical use in the prevention and treatment of MS. Furthermore, there are no significant differences in the genotypes and allele distribution of the SNP +45 T>G in the adiponectin gene among subjects with MS and controls in Tunisian population. This lack of association mostly likely reflects the complex pathogenesis of MS. Further functional studies need to be performed to investigate thoroughly the underlying cellular mechanisms. This signaling pathway will provide practitioners with important targets for therapeutic strategies aimed at limiting the inflammatory response involved in the development of MS.

ACKNOWLEDGEMENTS: We owe special thanks to the patients and volunteers for their collaboration and the staff of the biochemistry laboratory Farhat Hached University hospital and dispensary Kalaa Kebira, Sousse (Tunisia) for their precious technical support.