EVALUATION OF SOLID-STATE FORMS OF CURCUMINOIDS

EVALUATION OF SOLID-STATE FORMS OF CURCUMINOIDS

INTRODUCTION: Predominance and importance of polymorphism occurring in pharmaceutical compounds are well recognized, especially in pharmaceutical community. Different crystal arrangements or crystal lattices are possible for any particular compound. Polymorphic changes can be induced by heat, stress, pressure, and humidity conditions or solvent mediated processes. Different polymorphs of the same substance can have different physical properties such as melting point, chemical reactivities, dissolution rate and bioavailability due to differences in molecular packing.

The change of the polymorphic form frequently causes clinical failures once it is on the market. Hence, it is very important to prepare and select the right form from the beginning during drug discovery and development. The extent of polymorphic transitions depends on the processing conditions and the relative stability of the polymorphs 1, 2.

Curcuminoids are extracted from rhizomes of Curcuma longa (family: Zingiberacae), commonly known as turmeric, which are responsible for yellow-orange coloration to turmeric powder and possess a camphoraceous odour. Turmeric contains 3-5% curcuminoids. Naturally occurring curcuminoids contain mixture of 77% curcumin[1, 7-bis (4-hydroxy-3-methoxy-phenyl)-1, 6-heptadiene-3,5dione], 17% demethoxycurcumin[4-hydroxycinnamoyl - (4 – hydroxyl – 3 - methoxy cinnamoyl methane)] (DMC) and 6% bisdemethoxycurcumin (bis-(4-hydroxy cinnamoyl) methane) (BDMC). The curcuminoids differ in their chemical structure and melting points. Curcumin is the most important constituent which is responsible for the biological activities of turmeric. Curcuminoid derivatives with Alteration in chemical structure in structure can influence the physiological activity, leading to variation in pharmacokinetic parameters 5-7.

A large number of studies demonstrated the potential biological activity of curcumin. According to these studies, curcumin was reported to exhibit anti-inflammatory, antioxidant, anticarcinogenic, antiviral and antimicrobial activity. Besides these, curcumin has a variety of potentially therapeutic properties, such as anti angiogenic, immunomodulatory, antithrombotic, wound healing, antistressor, antilithogenic, cardioprotective, neuroprotective, antidiabetic and chemoprotective activities.   It has been reported that not only the curcumin the other curcuminoids, DMC and BDMC are also responsible for antioxidant activities as well as hepatoprotective activity 8, 9.

The fast growing research on curcuminoids suggests that, DMC and BDMC show a broad range of potent therapeutic applications. The presence of BDMC was found to be a better cytotoxic agent than curcumin and DMC. BDMC showed greater antitumor, antipromoter, and anticarcinogenic activities than curcumin or DMC 10, 11. The problems associated with curcumin/curcuminoids i.e. low aqueous solubility and poor bioavailability may be addressed through the studies on development of new polymorphic forms. With this background, the present study mainly focuses on the polymorphic behaviour of curcuminoids and to investigate the polymorphic nature of curcumin in presence of other minor constituents. 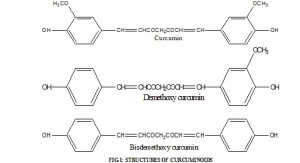 Three crystalline forms of curcumin, namely forms 1- 3 and an amorphous form were reported.  Six Polymorphs  form I - VI of curcumin were reported in the patent literature. Of these, Form III is a meta-stable form, form II & form V are 1, 4-dioxane solvates and form VI is a methyl acetate solvate 12, 13.

However, there was no matching in the PXRD and DSC data reported for forms 1-3 and patented forms I to VI. Curcumin, forms 1-3 were obtained from dried rhizomes of turmeric plant curcuma longa from Indian source.

No polymorphic forms of DMC has been reported so far. Two crystalline forms I and II of BDMC were reported by using solvent evaporation method using ethyl acetate and acetonitrile respectively 14.

The polymorphic transformations of polymorphs of curcumin from form 1 into form2 and 3 in presence of ultrasound and additives were reported 15.

The objective of the present work is to study the polymorphic behaviour of curcuminoids where curcumin is present along with other constituents Demethoxy curcumin (DMC) and Bisdemethoxy curcumin (BDMC) through preparing various solid forms of curcuminoids, under different experimental conditions, and to characterize them by spectroscopic, thermal and microscopical analysis.

200mg of curcuminoids was dissolved in 25ml of isopropanol & allowed to evaporate at room temperature. Then the crystals formed was filtered, dried and designated as solid form A.

200mg of curcuminoids were dissolved in 25ml ethanol and heated to make a supersaturated solution and cooled to temperature of 10⁰C. Then the formed crystals was filtered, dried and designated as solid form B.

500mg of curcuminoids was ground in mortar and pestle for about one hour in clock wise direction incorporating 2-3 drops of methanol. The obtained product was collected and designated as solid form C.

500mg of curcuminoids was ground in mortar and pestle for about one hour in clockwise direction. After one hour the product was collected and designated as solid form D.

100mg of curcuminoids were melted at 190⁰C and then immediately cooled to room temperature in ice to a glassy state and designated as solid form E.

The FTIR spectra were acquired on a BRUKER model 65 with OPUS software at room temperature from 4000-400 cm-1. Standard KBr pellets were prepared from 100mg of KBr pressed under 15,000 lbs and solid forms containing 2-3mg were used. Interpretation of the IR spectra was based on the identiﬁcation of the functional groups represented by specific wave numbers.

The thermal behaviour of solid forms of curcuminoids was measured with Mettler Toledo 821e DSC module for thermal analysis; 6-7 mg of weighed samples (Mettler M3 microbalance) of each Solid form was placed in crimped 40µL aluminium pans. Each sample was heated from 40 to 500 at a ramp rate of 10⁰C/min. The instrument was preventively calibrated with Indium as a standard reference. A purge gas of nitrogen was passed over the pans with a flow rate of 20mL/min. The temperature and enthalpies were calculated by the software (STAR e software) by integrating the transition areas associated and normalizing the weight of each sample.

Powder X-ray diffraction patterns of solid forms of curcuminoids were performed on Shimadzu 7000 diffractometer. The divergence and scattering slits were set at 1.0mm, and the receiving slit was set at 0.3 mm. Diffraction patterns within the 2θ range of 10-80⁰ were recorded at room temperature using Cu Kα radiation at following conditions: tube voltage of 40 kV, tube current of 30 mA, step-scan mode with the step size of 0.02⁰, 2θ and counting time 00.6sec/temp. The diffractograms were analyzed using Spectris diffraction software.

Dissolution studies of solid forms were was performed according to the USP standard dissolution apparatus Type II (Electro Lab, TDT-08L, Dissolution tester, USP) at 37 ⁰C ±0.5 ⁰C at a paddle speed of 100rpm. 10mg of sample was placed into the vessel containing 900ml of distilled water. At specific intervals, 5ml aliquots of the dissolution medium was sampled and replaced with buffer, filtered (pore size 0.45µm) and assayed spectrophotometrically at 430 nm (UV-Double beam spectrophotometer, UV- 1800, Shimadzu) to determine the amount of drug dissolved. The dissolution experiments were conducted in triplicate and standard deviation was also calculated.

(i) Input material of Curcuminoids:

From the above FTIR, PXRD and DSC data, it may be confirmed that the input material consists of curcumin polymorph 1.

Comparative FTIR spectra, PXRD patterns and DSC thermograms of all solid forms were shown in Fig. 2, 3 and 4 respectively. 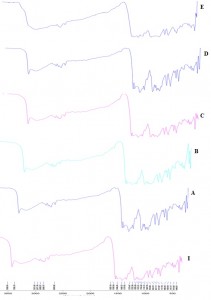 In this study, various solid forms of curcuminoids were prepared by employing different processing conditions like crystallization of solvents with isopropanol and methanol, solvent drop grinding, neat grinding and melting crystallization and the resulting solids were designated as solid forms A, B, C, D and E respectively.

The IR spectrum of solid form A, obtained from crystallization of isopropanol, displayed all the characteristic bands which were similar to the Input material of curcuminoids as shown in Fig.1. It exhibited significant absorbance bands at 3511, 1628, 1599 and 1427 cm-1.

The IR spectrum of solid form B obtained from crystallization of ethanol displayed all the characteristic bands very similar to input material curcuminoids as shown in Fig. It displayed characteristic absorption bands at 3511, 1628, 1599 and 1427 cm-1.

It is well known that grinding or milling is one of the manufacturing processes in pharmaceutical industry. Grinding process can modify the physical and chemical properties of drugs, such as introduction of a signiﬁcant lattice strain within the crystalline drug, alteration of crystallinity of drug, reduction of particle size, and induction of polymorphic transformation of drug polymorphs 21.

The IR spectrum of solid form C obtained by solvent assisted grinding displayed all the characteristic bands which are similar to input material. It showed significant absorption bands at 3511, 1628, 1599 and 1427 cm-1.

Addition of few drops of solvent act as catalyst and facilitates the polymorphic transformation. Incorporation of solvent molecules into a solid form influences the intermolecular interactions in the crystal structure 22. In case of solid form C, curcuminoids upon solvent assisted grinding neither resulted in the formation of pseudo polymorphs nor underwent any polymorphic transitions.

The IR spectrum of solid form D was obtained from neat grinding, displayed all the characteristic bands which were similar to input material. It showed absorption bands at 3511, 1628, 1599 and 1427 cm-1.

A small broad melting endotherm was observed for solid form D in DSC trace, at 171.6 ⁰C (ΔH 65 j/g) with onset temperature and endset temperatures at 165.2⁰C and 175.6⁰C respectively. No significant difference was observed when curcuminoids were subjected to neat grinding, suggesting that curcumin did not undergo any polymorphic change in curcuminoids.

There was a significant change in DSC behaviour of solid form E.  It exhibited a small broad endotherm at 64⁰C with onset temperature and endset temperatures at 58⁰C and 86⁰C respectively. The broadening of the endotherm may be due to the solid- solid transition of form 1 of curcumin into amorphous form. This difference in thermal behaviour suggests that, curcuminoids underwent a significant polymorphic change under melt crystallization Conditions, similar to curcumin. However, amorphous form of curcumin was reported to be crystallized to form 1 upon heating, but the amorphous phase of curcuminoids did not show any such transformation.

From the above data, it was confirmed that Curcumin present in curcuminoids transformed into amorphous form under melt crystallization conditions.

The SEM photographs of curcuminoids solid forms developed from different processing conditions are represented in Fig. 5. The SEM pictures reveal that the crystals of the solid forms represent differences in size, morphology and surface.

The crystal shape of input material is irregular aggregates of small size crystals, whereas clusters of long rod like structures were observed for solid form A. On the other hand, solid form E showed irregular particles. 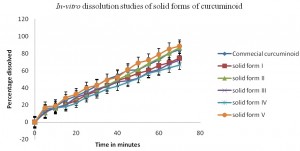 CONCLUSION: The solid-state characterization of curcuminoids demonstrated interesting polymorphic behaviour of its constituents present in the form of a mixture. The input material of curcuminoid was similar to curcumin polymorph 1. Curcuminoids, on recrystallization from ethanol underwent polymorphic transformations resulting in a mixture of forms 1&2 and a predominant amorphous form. Upon melt crystallization also, similar transformation into amorphous form was resulted. The dissolution rates of these amorphous forms (solid forms B and E) were found to be increased. The poor dissolution observed with curcuminoids was improved by converting into amorphous forms.

Curcuminoid on crystallization from isopropanol or upon solvent assisted and neat grinding did not undergo any polymorphic changes. The coexistence of the curcumin, DMC and BDMC in curcuminoids studying their polymorphic behaviour presents an interesting aspect of modifying their properties. The solid- state behaviour of curcuminoids was mainly due to its major constituent curcumin, while DMC and BDMC did not contribute to the overall crystalline properties probably owing to the amorphous nature of DMC or to the low percentage of BDMC in the curcuminoids. The differences in the reported polymorphic forms of curcumin i.e., curcumin forms 1-3 and the patented forms I to VI may be due to variations in the purity of curcumin.

In conclusion, the present work underlines the importance of polymorphic behaviour of curcuminoids and its major constituent, curucmin for their therapeutic potential.