Alzheimer’s disease (AD) is characterized by the abnormal aggregation of amyloid ß (Aß) peptide into insoluble fibrils called amyloid plaques. Preventing this process of fibrillization may offer effective therapy for treatment of AD. The aim of the present study is to investigate the effect of methanolic extracts of 13 plant species which are known to be brain boosters in Ayurvedic system of medicine. Our study addressed the influence of these extracts on (i) prevention of aggregation of Aß and (ii) dissociation of preformed Aß fibrils. The aggregation status was monitored by thioflavin T fluorescence assay. The results showed that extracts from Bacopa monneria, Centella asiatica, Convolvulus pluricaulis, Withania sominfera, Nardostachys jatamansi and Glycirrhiza glabra exhibited promising activity by preventing Aß fibril formation/ retention thus identifying Aß as the molecular target for their action. These findings prompt further studies to isolate the active ingredients from these extracts to ultimately determine their therapeutic potential in AD treatment.

Abnormal processing and extracellular deposition of Aβ (1-42), a proteolytic derivative of the larger amyloid precursor protein (APP) is a key step in the pathogenesis of Alzheimer’s disease 2. The current therapeutic efforts are directed towards developing drugs that reduce Aβ burden or toxicity by inhibiting its production, aggregation or misfolding, toxicity, Aβ-metal interactions or by promoting Aβ clearance by neutralizing or removing the toxic aggregate or misfolded forms of these proteins 3, 4.

Also immunization with Aβ (1-42) has been shown to decrease brain Aβ deposition and improve cognitive performance in the transgenic mouse models of AD 5.

India has the traditional Ayurvedic system of medicine in which a number of plants are used for the treatment of variety of diseases. Over the last 4000 years, Ayurvedic medical practitioners across India have been using some of the plants which are classified as “medhya rasayanas” or nootropic cerebral activators for treating disorders of the central nervous system (CNS) and also to improve the memory and intellect. While pharmaceutical companies continue to invest enormous funding and time on identifying agents that could be useful for treating AD, these Ayurvedic phytochemicals would appear to have significant benefits without causing any side effects that have yet to be fully exploited.

Experimenting with novel therapeutic molecules becomes relevant and this study is an attempt to shortlist a few plant based compounds which might interfere with the disease pathology either by preventing or slowing the progress of AD. Plants included in the present study are: Bacopa monniera, Centella asiatica, Withania Somnifera, Acorus calamus, Nardostachys jatamansi, Convolvulus pluricalis, Glycirrhiza glabra, Emblica officinalis, Punica granatum, Terminalia chebula, Coriandrum sativum, Saussurea lappa and Tinispora cordifolia. These plants have been shown to have anti-anxiety activity, anti-fatigue and memory enhancing effects 6, 7.

Among these, bacosides from Bacopa monniera extract have been shown to reduce the amyloid plaque levels in PSAPP mice 8. Asiaticoside from Centella asiatica has been reported to have protective effects from Aβ induced neurotoxicity 9. Extracts from Withania somnifera have reversed AD pathology in APP/PS1 transgenic mice by enhancing low density lipoprotein related receptor levels in the liver 10.

Our current study focused on identifying whether Aß is the molecular target of these phytocompounds in exerting their beneficial effects. This was achieved by evaluating the ability of the methanolic extracts of the useful parts from the above 13 nootropic plants on;

Materials: Dimethylsulfoxide and thioflavin T were purchased from Sigma Aldrich (Bangalore). The desiccated plant materials were obtained from Arya Vaidya Sala (Kottakkal). The native Aß used in the present study was recombinantly expressed and purified as described earlier 11. All other reagents used were of analytical grade and obtained locally.

Filtered extract was concentrated to evaporate the methanol completely in vacuum centrifuge and the dried extract was stored in -20oC. Extracts were solubilised in dimethylsulfoxide and 100 µg/ µl stocks were prepared and used for aggregation studies.

Preparation and characterization of aggregates of Aß: Native Aß was dissolved in dimethylsulfoxide, followed by dilution with double distilled water and then with phosphate buffered saline to eventually prepare a 200 µM stock solution. This stock (200 µl) was incubated with 20 mM thioflavin T at 37oC for 5 days with intermittent shaking during the incubation to facilitate the formation of Aß aggregates. Formation of Aß fibrils was confirmed by measuring the fluorescence intensity (Excitation: 446 nm; Emission: 490 nm) in a fluorescence spectrophotometer (Shimadzu, RF 5301 PC).

For AD, there are relatively few drugs available to treat symptoms; there is a lack of successful therapy that can modulate disease progression. Since two of the currently licensed drugs for AD are based on natural products (galantamine and rivastigmine) 15, many plants are now being investigated (Table 1) as a potential source of new therapy for AD 16.

TABLE 1: LIST OF SOME OF THE MEDICINAL PLANTS AND THEIR ACTIVE INGREDIENTS CLINICALLY RELEVANT TO ALZHEIMER DISEASE

In the present study, we present the results of studies designed to elucidate the molecular target of action of the extracts obtained from the following list of plants (Table 2) short listed with inputs from literature and traditional Indian medicinal plants originally classified as brain boosters. First, methanolic extracts of the plants were prepared from 5gm each of the dried plant parts in Soxhlet apparatus wherein the dry plant part was subjected to methanol heated at 60oC. It was further filtered and vacuum centrifuged to dryness and reconstituted in dimethy sulfoxide to a final concentration of 100 µg/ µl.

TABLE 2: LIST OF THE PLANTS USED IN THE PRESENT STUDY AND THE PERCENTAGE YIELD OF THE METHANOLIC EXTRACT

Similarly Glycyrrhiza glabra, Convolvulus pluricaulis, Bacopa monniera, Centella asiatica, Nardostachys jatamansi and Emblica officinalis showed considerable effect on the dissociation of aggregates among which Glycyrrhiza glabra was the most effective. 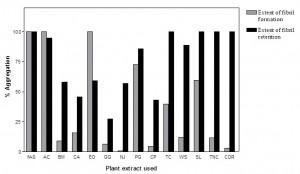 FIGURE 1: EFFECT OF PLANT EXTRACTS ON INHIBITION OF AGGREGATION AND DISSOCIATION OF PREFORMED AGGREGATES. FLUORESCENCE INTENSITY OBTAINED WITH FIBRILLAR Aß IN THE ABSENCE OF ANY PLANT EXTRACT WAS TAKEN AS 100%.

In summary, herbal extracts which are widely used in Ayurveda for improving the CNS functions were evaluated for their anti-amyloidogenic properties using in vitro Aβ aggregation studies. Among the plants tested, results obtained with Bacopa monniera, Centella asiatica and Withania somnifera are in agreement with the reports from literature in terms of their influence on destabilization of Aß fibrils.

In addition, the current findings offer direct evidence on the influence of the extracts from Glycyrrhiza glabra, Convolvulus pluricaulis and Nardostachys jatamansi in favour of Aß-centric therapy for AD. Further studies are in progress regarding the isolation of active phytocompounds from these extracts.

However, since this study provides only results obtained from in vitro studies, further studies must be carried out in animals, to assess the activity and also the bioavailability of the isolated compounds or extracts, which is especially critical for their action in the central nervous system.