ABSTRACT: Arthritis is a joint disorder which is characterized by inflammation. A joint function to move the body parts connected by its bones. Arthritis means inflammation of one or more joints. The study investigates the anti-arthritic activity in rodents by use of in-vivo parameters Paw volume, Knee diameter, Paw thickness, Paw oedema, and body weight. Some biochemical parameters were also done, such as SGOT, SGPT, Total protein estimation, ESR rate, Haemoglobin level Histopathological investigation. Animals serving as arthritic control received 2% formaldehyde 0.1ml throughout the study; while the animals in the standard group received 10mg/kg of Indomethacin. The animal in the test group received 240mg/kg extract once daily by oral route. The results revealed that preliminary phytochemical screening of Salix alba extract, revealed the presence of following phytoconstituents i.e., alkaloids, flavonoids, terpenoids, tannins and proteins. The proximal analysis of extract was found ash value, acid value and moisture content. Histopathology was represented, Normal control group joint normal synovial membrane and joint space, Negative control group Arthritis characterized by the presence of inflammatory cells neutrophils & lymphocytes joint space. Test group joint marked recovery of synovial membrane but mild inflammation reaction in joint space. Standard Joint marked degeneration of bone and synovial membrane. The present study's findings reveal that Salix alba extract has anti-arthritic activity, which could be due to its various effects. It could be used as add-on therapy in the management of arthritic conditions.

INTRODUCTION: Arthritis is derivative from the Greek term “disease of the joints. It is well-defined as an acute or long-lasting joint tenderness that often co-exists with pain and physical injury 1. Arthritis is a joint disorder featuring inflammation. A joint is a part of the body where two dissimilar joints meet.

A joint role to change the body portions associated by its bones. Various pharmacological mediators can stop or relieve the short-term pain and reverse the progression of physical damage 2-5. A number of anti-inflammatory drugs used in the treatment of arthritis have been developed over the past few decades, but there is still an urgent need for more effective drugs with lower side effects 6-7.

Plant Profile: The Present Experimental protocol was designed to explore the Arthritis activity of the drug called Salix alba extract, which has anti-inflammatory activity. The Salix alba extract was obtained from Vital Herbs (Z-26/27 Commercial Enclave, Mohan Garden Uttam Nagar Delhi- 110059), to investigate the Anti-arthritic Activity of Salix alba (Wistar rats) by use of in-vivo:

Some in-vitro activities were also done, such as:

Experimental Animals: Healthy Wistar rats (Male and Female) of approximately 10-12 weeks age, weighing 200-250g, were purchased from the Laboratory Animal Services Division of Central Drug Research Institute (CDRI), Lucknow. The animals used during the study were treated humanely throughout the study period under the guidelines of CPCSEA. The animals were acclimatized by keeping in an animal house facility for a week. They were housed in polypropylene (32×24×16 cm) cages in a group of 5 animals per cage, containing bedding material as husk and maintained under controlled conditions of temperature (23±2 ºC), humidity (55±5%) and 12 h light and 12 h dark cycles. They were fed with a commercial pellet with water ad libitum.

The experiments were designed and conducted following the guidelines of CPCSEA and was approved by Institutional Animal Ethical Committee (IAEC) proposal number AUUP/M. Pharm/008/2021.

Proximate Analysis 15: The parameters determined for proximate analysis include ash value, moisture content, and acid value of the drug.

Total Ash: Accurately weighed 2 gm of the Salix alba extract powder was taken in a tarred silica dish and it was incinerated at a temperature not exceeding 450°C until free from carbon. The sample was cooled and weighed. If carbon-free ash cannot be obtained in this way, the charred mass is exhausted with hot water. The residue was collected on ashless filter paper was incinerated, and then the filtrate was evaporated to dryness and ignited at a temperature not exceeding 450°C. The percentage of ash was calculated at 36.20mg.

Moisture Content: Powdered extract of Salix alba (W2, 2g) was placed in a weighed petri dish (W1). The Petri dish was kept in a hot air oven at 60оC till constant weight (W3) was achieved. The sample was placed in a desiccator after it had achieved constant weight and then weighed to determine the moisture content and total solids using the following formula:

Acid Value: 1g of extract was taken and weighed accurately and placed in a 250-ml conical flask, then 2.5-.5 ml of ethanol-ether(v/v) solution was added. It was shaken well. Then it was titrated with potassium hydroxide titrate until the pink colour persist for at least 30 seconds. The titration was done for 3 times. The volume of potassium hydroxide titrant used was measured, and the acid value was calculated.

Anti-arthritic Activity: Male Wistar rat weighing between 150-200g were grouped in four groups of five animals in each group.

On the 0th day, each animal's paw volume of the right hind paw was measured using a digital plethysmometer and vernier calipers.

On the day 1st, 7th, 14th and 21st they were injected into sub plantar region of the right hind paw with 0.1ml of 2%v/v formaldehyde in normal saline. Dosing with standard drug Indomethacin and test drug Salix alba extract was started on the same day and continued for 28 days.

Animals serving as arthritic control received 2% formaldehyde 0.1ml throughout the study; while the animals in the standard group received 10mg/kg of Indomethacin.

The mean changes in injected paw edema with respect to initial paw volume were calculated on respective days, and % inhibition of paw edema concerning the untreated group was calculated.

The body weight of each group of animals was recorded before the induction of arthritis, and changes in body weight were also recorded.

At the 28th day, blood was withdrawn through retro orbital puncture of all groups by anaesthetizing the animals with diethyl ether. The biochemical parameters like SGPT, SGOT, Total Protein, ESR, and Hb were administered and analyzed.

Formaldehyde Induced Anti-arthritic Potential: In Table 1, the values represent formaldehyde induces an increase in the knee diameter, paw thickness, paw volume and bodyweight of arthritic animals as compared to the normal control (vehicle), representing the joint inflammation and swelling due to the issue of inflammatory mediators. The treatment with indomethacin (10mg/kg p.o) and test Salix alba ethanolic extract (240 mg/kg p.o).

Values were expressed as Mean± SEM (n=5) One-way ANOVA followed by Dunnett test. All the results were found to be significant *(p<0.01), ** (p<0.0001) when compared to the negative control group. 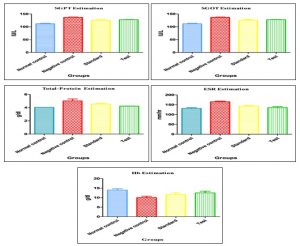 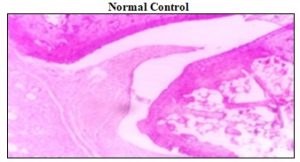 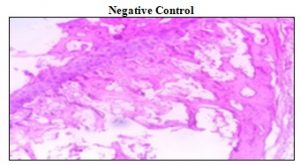 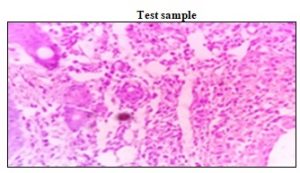 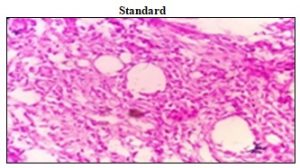 DISCUSSION: Arthritis is one of the most prevalent chronic health problems and is a leading cause of disability. Arthritis affects 43 million U.S. adults and is the leading cause of disability in the United States. By the year 2020, this number is expected to reach 60 million. More than 20% of the total population in India also suffers from arthritis. Arthritis is a condition where one or more joints are affected, featuring inflammation of those joints. Alkaloids, tannins, flavonoids, carbohydrates, protein, and steroids were reported to be present in the ethanolic extract of Salix alba. The ethanolic extract of Salix alba was safe at a dose of 240mg/ kg. Anti-arthritic activity was evaluated according to the ability of the test and standard drug to inhibit formaldehyde-induced paw swelling. After the induction of arthritis, an increase in swelling was observed.

The diameter of paw volume was measured in the rats of each group on the 7th, 14th, 21th, and 28th days after the induction of arthritis. In the recent study, osteoarthritis was induced by 0.1ml of 2% v/v formaldehyde in normal saline into the sub planter region of the left hind paw on the first day or third day of the study period. Formaldehyde injection reasons a chronic inflammation of the rat foot, which involves the proliferation phase of inflammation elicited by COX mediators. Swelling around the ankle joint and paw of an arthritic rat is considered to be due to the oedema of particular tissue such as ligament and capsule. The growth of oedema in the paw of the rat after injection of formaldehyde is due to the release of serotonin histamine, or the prostaglandin-like substances also contributed to the oedema formation at the site of injection. So, the suppression of oedema by Salix alba in formaldehyde method shows its anti-inflammatory and immunomodulatory effect. The management of formaldehyde significantly increased the diameters of rat paw and ankle as related to the healthy control due to the soft tissue swelling around the ankle joints appeared during the progress of arthritis, measured as oedema of the exacting tissues. Treatment with standard (indomethacin 10 mg/kg, b.w.) and test (Salix alba 240mg/kg) extract reduced the paw oedema compared to the arthritic control group to inhibition of the release of inflammatory mediators show. The decrease in the body weight and paw thickness during arthritis is due to deficient absorption of nutrients through the intestine, and treatment with anti-inflammatory drugs normalizes the process of absorption.

The decrease in the body weight & paw thickness during arthritis is due to deficient absorption of nutrients through the intestine, and treatment with anti-inflammatory drugs normalizes the process of absorption. The treatment with the test extract (240 mg/kg, body wt.) and the standard has shown a significant increase in protein levels compared to the arthritic control. The standard medication indomethacin treated groups have prevented this bony destruction, and there is no swelling of the joint. Salix alba extract-treated groups also show significant recovery from bony erosion and potential anti-inflammatory and anti-arthritic properties.

CONCLUSION: Arthritis is considered chronic inflammation and the destruction of synovial joints, leading to joint disability and deformity. Arthritis is a condition where one or more joints are affected, featuring inflammation. Natural products from plants, animals & minerals have been the basis for treating human disease. In the present study, Salix alba dose levels showed a prominent anti-arthritic effect imparting anti-inflammatory effect might be due to the existence of flavonoids, tannins, steroids contributed to the support of synovial membrane, recovery of bone destruction thereby inhibiting cytokines and leukotriene infiltration inhibition as showed in paw edema.

The above results provide mechanistic evidence for anti-arthritic appliance Salix alba as a promising entity for the novel therapeutic agent of arthritis.

ACKNOWLEDGEMENT: We are thankful to the Amity Institute of Pharmacy, Amity University, Lucknow Campus, Uttar Pradesh, India, for providing facilities to conduct the research project smoothly.

CONFLICTS OF INTEREST: The author has no conflicts of interest in this work.