INTRODUCTION: Epilepsy is a group of heterogeneous neurological disorder characterized by spontaneous and recurrent seizures and is one of the most common disorders that affect 1% of the population 1. The causes of epilepsy are many, ranging from idiopathic to infection to neoplasm and to head injury 2. Epilepsy is a common disorder with an incidence of ~ 0.3-0.5 % throughout the world, and the prevalence has been estimated at 5-10 persons per 1000 1.

Despite the massive scale of the problem and much research, epilepsy remains poorly understood 3.

Presently available therapy is symptomatic, i.e., the drugs inhibit seizures, but whether any of these prevent the development of epilepsy or cure are uncertain 4. The currently available drugs fall into 3 major categories depending on their mechanism of action, i.e. promote the inactivated state of voltage-gated Na+ channel, enhanced GABA mediated synaptic inhibition, and limited activation of voltage-gated Ca2+ channel 4.  Insights that promise to provide molecular targets for both symptomatic and preventive therapies are being researched. Indigenous medicinal plants are in use since ages for neurological disorders. The added advantage of these would include its complementary nature to conventional treatment, making them safer, well tolerated, economical, and naturally accessible remedy. Nerve tonic herbs like Ashwagandha (Withania somnifera), Brahmi (Bacopa monniera), Jatamansi (Nardastachys jatamansi), Shanka pushpi (Evolvulus alsinoides) Tulsi (holy basil), etc. are used to pacify nervous system and to reduce instances of abnormal brain functioning including episodes of epilepsy 5.

The flower of Abelsmoscus manihot has been reported to have a neuroprotective effect against cerebral ischemia injury. The ethanolic extract of this plant contains isoquercitin, hyperoside, hibifolin, quercitin- 3- O glucoside, quercitin. These are found to contribute to its anticonvulsant and antidepressant activity in-vivo. 6

The long history of guava use has led modern-day researchers to study guava extracts Psidium guajava (Linn.) popularly known as 'poor man's apple of the tropics,' has a long history of traditional use for a wide range of diseases. Guava contains a broad spectrum of phytochemicals including polysaccharides, vitamins, essential oils, minerals, enzymes, proteins, sesquiterpenoids, alcohols, triterpenoid acids, alkaloids, glycosides, steroids, flavonoids, tannins, and saponins. The leaves of guava are rich in flavonoids, in particular, quercetin. Much of guava's therapeutic activity is attributed to these flavonoids 7.

Quercetin is known to produce CNS depressant activity by interaction with presynaptic calcium channels in the CNS. In neurons showing intrinsic burst firing, signaling epileptic activity, there is a massive influx of Ca++ associated with the paroxysmal depolarizing shift and hence the influx of extracellular Ca++ into neurons is considered to be an important feature in triggering epileptic activity 9.

Another study has also shown its effect probably through NMDA receptor antagonism 1. It was therefore considered worthwhile to evaluate the anticonvulsant activity of guava leaves in albino mice.

MATERIALS AND METHODS: Albino mice of either sex of average weight 25-30 gm aged 3-4 months were bred in central animal house. They were housed in groups of three in clean polypropylene cages with 12 h light/dark cycle at 25 ± 2 ºC and 65 ± 5% humidity. They had access to food (standard pellet diet, Hindustan Lever Ltd) and water. All experiments were carried out between 11 AM and 3 PM. Ethical clearance was obtained from the Institutional Animals Ethical Committee for the experimentation.

Maximal Electroshock-induced Seizures: 10Electrical stimulation is applied via ear electrodes with a current strength of 50 mA for 0.2 sec. The resultant seizure passes through various phases; phase of tonic limb flexion (1.5-sec duration), phase of tonic limb extension (10-sec duration), finally followed by a variable short clonic interval which may lead to asphyxial death in some animals. Twenty-four hours before testing of anticonvulsants (to avoid any possible kindling effect), the animals are pre-screened for their ability to develop full tonic extension in the maximal electroshock test.

Suppression of tonic hind limb extension is taken as a measure of efficacy in this test.

Pentylenetetrazole (PTZ) Induced Convulsion 11: 1 hour after test drugs and standard drug administration, 70 mg/kg pentylenetetrazole is injected intraperitoneally. Each animal is placed into an individual plastic cage for observation lasting 30 min. Within 30 min they develop a sequence of excitement, myoclonic jerks, clonic seizures, one or more maximal tonic seizures followed by recovery or some animals may succumb to death. Seizure latency and the abolition of clonic seizures with loss of righting reflex will be taken as an index of protection.

Maximum Electroshock-Induced Seizures: The ethanolic extract of Psidium guajava produced significant dose-dependent antiepileptic activity in comparison to control group. The extract at a dose of 400 mg/kg produces marked reduction in duration of tonic hind limb extension – 8 ± 1.09 sec in comparison to the dose of 200 mg/kg – 10 ± 1.89 sec. The duration of tonic hind limb extension and the percentage inhibition of seizure by the respective groups are depicted in Table 1 and Graph 1. 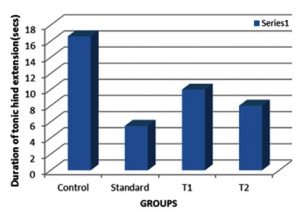 PTZ Induced Seizures: The ethanolic extract of Psidium guajava produced significant dose-dependent antiepileptic activity in comparison to control group. The seizure latency produced by the extract at a dose of 400 mg/kg (T2) is 324.3 + 4.13 in comparison to the dose of 200 mg/kg(T1) – 193.6 ± 3.44.

The duration of seizure latency and the percentage of protection from seizure by the respective groups is depicted in Table 2 and Graph 2.

TABLE 2: EFFECT OF ETHANOLIC EXTRACT OF PSIDIUM GUAJAVA ON DURATION OF SEIZURE LATENCY IN PTZ MODEL 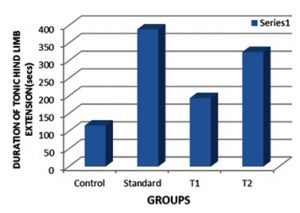 GRAPH 2: EFFECT OF ETHANOLIC EXTRACT OF PSIDIUM GUAJAVA ON DURATION OF SEIZURE LATENCY IN PTZ MODEL

DISCUSSION: Epilepsy is a major public health issue in many nations, and the frequency of epilepsy and seizures increases in later life. Due to the heterogenicity of the disease and our limited understanding of it, discovery and development of anti-epileptic drugs have been especially difficult. In the above study, the ethanolic extract of Psidium guajava produced a significant antiepileptic effect in a dose-dependent manner. The percentage inhibition of seizure produced by T2 is 49%, and T1 is 37% in MES test. And the percentage of protection from seizure by T2 is 83.4% and T1 is 50% in PTZ test. Hence, the higher dose (400mg/kg) has better antiepileptic activity in comparison to the lower dose (200mg/kg).

Neuroprotective effect of quercetin against neurotoxin-induced damage has already been reported in the central nervous system. Quercetin, the flavonoid commonly present in guava leaves could reduce neuroplastic changes in neural circuits and also augmented excitability in certain sited involved in epilepsy. On the other hand, quercetin and its derivatives can selectively inhibit NMDA receptor functionality.

The neuroprotective effect of quercetin in addition to its intrinsic antioxidant effect could be least partly due to modulation of XIAP expression, hints to a possible target for antiepileptic interventional measures 13. Pretreatment with 50mg/kg of quercetin could attenuate seizure severity from the beginning of the kindling experiment by lowering the mean seizure stages in PTZ model 14.