EVALUATION OF THE ANTIDEPRESSANT EFFECTS OF BACOPA MONIERI IN MICE

EVALUATION OF THE ANTIDEPRESSANT EFFECTS OF BACOPA MONIERI IN MICE

ABSTRACT: Bacopamonnieri L. Pennell (family: Sclorphulariaceae) is a reputed drug of Ayurveda. The present study was undertaken to investigate the antidepressant activity of alcoholic extract of B. monnieri was studied at doses of 40 mg / kg and 80 mg / kg against TST and FST mice model of depression. Dose dependent reductions in immobility time were observed in TST and FST mice model of depression. The results showed that the alcoholic extract decreased immobility time with the increase swimming time. Ethanolic extract (40, 80 mg / kg, p.o.) (P<0.01) significantly reduced the immobility time by   10 and 15 seconds as compared to the immobility time of control in both the screening models.  Imipramine at doses of (20 mg/kg, p.o.,) was selected as reference standard. These results suggested the anti-depression activity of the plant extract. The effect of the extract was 5-20 times less potent than standard imipramine group which was used as a standard. It may be concluded that the alcoholic extract of B. monnieri produces an antidepressant like effects that seem to be antidepressant. Therefore, B. monnieri may be served as a potential resource for natural psychotherapeutic agent against depression. The findings from the present investigation indicate the extract has significant antistress as shown by its effects on different experimentally induced animal models.

INTRODUCTION: Depression is considered as affective disorder characterized by change in mood, Lack of interest in the surroundings, psychomotor retardation and melancholia. It is often a disabling disease that affects persons work family, school life sleeping and eating habits 1, 2. Depression is a widespread psychiatric disorder affecting around 5 % of the population. To date, the efficacy of the drugs for these conditions are very limited so the need for newer, better-tolerated and more efficacious treatments is remaining high. It is difficult to predict which patient will respond to any given treatment 3.

In the traditional systems of medicine, many plants and formulations have been used to treat depression for thousands of years. Therefore, herbal therapies should be considered as alternative/ complementary medicines. Recently, the search for novel pharmacotherapy from medicinal plants for psychiatric illnesses has progressed significantly 4.

This has been reflected in the large number of herbal medicines whose psychotherapeutic potential has been assessed in a variety of animal models. Bacopamonnieri has been used in the Ayurvedic system of medicine for centuries. Bacopamonnieri plant belongs to family Scrophulariaceae, genus Bacopa include over 100 species of aquatic herbs distributed throughout the warmer regions of the world 5. It grows in wet and sandy areas and near the streams in tropical regions. It is a creeping herb with numerous branches and small fleshy, oblong leaves. Flowers and fruits appear in summer. Bacopa is also known as "Brahmi," after Brahma, the creator God of the Hindu pantheon 6. Most parts of the plant have been used traditionally, but modern preparations employ extracts of the stem and leaves. Today, in India, Bacopa is still recognized as being an effective brain tonic and is used in the treatment of learning disabilities, mental illness and epilepsy. This work was planned to assess the antidepressant like activity of Bacopamonnieri in two different doses and to see its effect as an add on therapy to the most commonly prescribed antidepressants drug imipramine, via oral route in acute depressive animal models.

Plant material Bacopamonnieri was procured from local market of Mumbai and it was authenticated at Nicholus Piramal Pvt Ltd. Goreagoan, Mumbai India.

The leaves material of B. monnieri was extracted successively with petroleum ether (60-80º C), chloroform, and ethanol in a Soxhlet extractor. The different extracts were evaporated under reduced pressure to obtained dry masses. The extracts were then stored in desiccator till further pharmacological studies.

Animals for the depression study

Adult male Swiss albino mice (25-35g) each were procured from Central Animal House, Jamia Humdard, New Delhi, India. They were housed in an environmentally regulated room on a 12 h light: 12 h dark cycle with 25 ± 2 o C and had free access to food and water. The experimental protocol was approved by the institutional animal ethical committee and experiment conducted according to the Committee for the purpose and Supervision of Experimental animals (Ref. no: 837 CPCSEA 29th Dec.2009). Experiments were carried out between 09:00 and 18:00 h. Pharmacological evaluation of alcoholic extracts  of B. monnieri were conducted on depression studies in mice.

On the day of the experiment, the animals were divided randomly into control and experimental groups (n=6). Group 1 received the vehicle, 1% Na CMC (10 ml / kg) and served as the control group, groups 2 received the standard drug imipramine (20 mg / kg) per orally, groups 3 and 4 received the test drug (BME) in doses of (40, 80 mg /kg). Drugs/vehicle was administered to the animals 60 minutes prior to the behavioural evaluation in study. Behavioural evaluation was carried out 60 minutes post drug/vehicle administration on 8th day. The antidepressant activity of the test drug was evaluated using the following experimental models of depression TST and FST.

Tail suspension test (TST) was used to evaluate the effects of various extracts on antidepressive study in mice as described by Steru et al., (1985)7. In tail suspension test, mice were suspended 50 cm above the floor by means of an adhesive tape, placed approximately 1 cm from the tip of the tail in a sound – isolated room. The time during which mice remained immobile was quantified during a period of 6 min. The duration of immobility was recorded during the last 4 minutes of the observation period.  Mice were considered to be immobile only when they hung passively and were completely motionless. All results were summarized in (Table 1).

The method described by Porsolt, et. al. was used in our study (Porsolt RD, et.al., 1977). In this model, mice are forced to swim in a restricted space from which they cannot escape. The apparatus consisted of clear plexi-glass cylinder (25 cm height x 20 cm diameter) filled to 20 cm depth with water (24 ± 1ºC) and were observed for duration of 6 minutes 8.The duration of immobility was recorded during the last 4 minutes of the observation period. The mouse was considered immobile when it floated motionlessly or made only those moments necessary to keep its head above the water surface. The water was changed after each test 9, 10. All the results summarized in Table 2.

The mean ± S.E.M. values were calculated for each group. The data were analysed using one-way ANOVA followed by Dunnet’s multiple comparison test.  P< 0.05 was considered to be statistically significant.

Values are expressed as mean ± SEM of six observations. The P value is ˂0.01, considered significant. Statistical significant test for comparison was done by ANOVA, followed by Dunnet’s test; ** p < 0.01.

The force swimming test (FST) has become one of the most widely used animal models for assessing antidepressant–like activity in mice. The results are summarized in (Table 1 and Fig.1).The force swimming test (FST), control group of animal showed immobility for duration of 93.33 ± 2.79  seconds , whereas immobility duration of standard drug imipramine group animal. 83 ± 1.25 sec. test drug BME at dose of 40 mg/kg showed immobility time. 83 ± 1.25 and higher dose of BME showed immobility time 8.17 ±0.83  when  test drugs and standard drug when compared to control group of animals, there was a significant difference in immobility duration of both the groups compared to control. 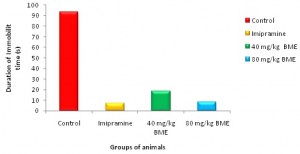 FIG. 2: EFFECTS OF BME ON FST ON MICE

Values are expressed as mean ± SEM of six observations. The P value is ˂0.01, considered significant. Statistical significant test for comparison was done by ANOVA, followed by Dunnet’s test; ** p < 0.01

The tests were based on the observation that animals, following initial escape oriented movements, develop an immobility posture when placed in an inescapable chamber. The test model of depression (forced swim test and tail suspension test) are based on the observation that mice when forced to swim or suspended in a restricted space from which there is no possibility of an escape, eventually cease to struggle, surrendering themselves (despair or helplessness) to the experimental conditions.

This suggested that this helplessness or despair behaviour reflected a state of lowered mood in laboratory animals and could serve as a valuable test for screening antidepressant drugs. In this study mice were treated with alcoholic extract of Bacopamonnieri at dose of ( 40, 80 mg/kg ) for 7 days once daily which was compared to control group which didn’t receive any treatment except the vehicle 1 %  Na CMC  at the dose of 10 ml / kg. Standard drug imipramine (20 mg/kg)  which was given daily once for 7 days to evaluate the antidepressant activity using two well established animal models i.e. force swim test (FST) and tail suspension test (TST). Lower dose of BME was found to be less effective in altering the immobility duration of mice. However, other doses significantly reduced the immobility time of mice in FST and TST.

This reduction in immobility time was found to be dose dependent in both the models. The minimal effective dose of extract was 40 mg/kg in FST and TST model. The results indicate that alcoholic extract of BME may have an antidepressant-like effect and the immobility time observed in the test reflected a state of lowered mood or hopelessness in animals, thus, this animal model is the most widely used tool for preclinical screening of putative antidepressant agents. The FST shows a strong sensitivity to monoamine alterations and is a very specific cluster of stress-induced behaviours that are not related to depression symptoms in humans, but which are nonetheless exquisitely sensitive to monoaminergic manipulations. It also provides a useful model tostudy neurobiological and genetic mechanisms underlying stress and antidepressant responses. This suggests that BME has reproducible antidepressant like activity irrespective of the model.

CONCLUSION: To conclude, alcoholic extract of BME has antidepressant property at doses of 40 and 80 mg/kg where it has shown significantly better results than control group and also antidepressant activity is comparable with standard antidepressant drug imipramine.The exact mechanism(s) involved in these effects will have to be elucidating in further studies which may be because of antioxidant property or some other mechanisms.