Categories Menu
Home » EVALUATION OF THE ANTIFUNGAL POTENTIAL OF A. SATIVUM EXTRACT AGAINST PHYTOPATHOGENIC FUNGI

EVALUATION OF THE ANTIFUNGAL POTENTIAL OF A. SATIVUM EXTRACT AGAINST PHYTOPATHOGENIC FUNGI

EVALUATION OF THE ANTIFUNGAL POTENTIAL OF A. SATIVUM EXTRACT AGAINST PHYTOPATHOGENIC FUNGI

ABSTRACT: The increasing public concern on the use of synthetic fungicide and resistance development led to an increase in search for alternative control strategies. Medicinal plants serve as therapeutic agents as well as important raw materials for the manufacture of traditional and modern medicine. Considering the vast potential of plants as sources for antimicrobial drugs with reference to antifungal agents, a systematic investigation was undertaken to explore the antifungal potential of few medicinal plants. In present study, in-vitro antifungal activities of few medicinal plant extracts were evaluated against two well-known plant pathogens i.e., Fusarium oxysporum (MTCC 284) and Cladosporium herbarum (MTCC 351). Fourteen plant ethanolic extracts were prepared, and out of them, five plants; Allium sativum, Zingiber officinale, Mentha spicata, Carica papaya and Elettaria cardamomum showed good antifungal activity. A. sativum ethanolic extract showing maximum antifungal activity was further subjected to carry out other studies. MIC values of ethanolic extract of A. sativum against F. oxysporum (MTCC 284) and C. herbarum (MTCC 351) were found to be 60 mg/ml and 120 mg/ml, respectively. Thin-layer chromatography of the A. sativum extract showed the presence of five constituents, and the active component was found to be heat stable and thus may be exploited as an effective biofungicide.

INTRODUCTION: Plants are known to be susceptible to different types of plant pathogens which are responsible for the economic loss ¹. Among all plant pathogens, fungi are the major disease-causing agents and are responsible for about 90 per cent of agricultural yield loss. Economically ten phytopathogens are very important and they are Magnaporthe oryzae, Botrytis cinerea, Puccinia spp., Fusarium graminearum, F. oxysporum, Blumeria graminis, Mycosphaerella graminicola, Colletotrichum spp., Ustilago maydis, and Melampsora lini 2.

Synthetic fungicides are widely used for quick and effective management for most plant pathogenic fungi. In recent decades their use has been increased because of the reduction in crop yield by nearly 20% due to fungal infections 3. The massive use of synthetic fungicides in crop defense from plant pathogenic fungi had a severe environmental impact 4.

They also affect plant physiology by impairing photosynthesis, altering total pigment content, increasing the synthesis of gibberellins and sterols, and reducing biomass and CO2 assimilation 5. Moreover, resistance by pathogens to fungicides has rendered certain fungicides ineffective. In recent years, a large number of synthetic pesticides have been banned in the western world because of their undesirable attributes such as high and acute toxicity, long degradation period, and accumulation in the food chain 6.

Thus, there is an urgent need to look for natural products that can be used as important sources of new agrochemicals for the control of plant diseases. Cycloheximide, streptomycin, blasticidin S, poly-oxin, geldanamycin, nigericin, fistupyrone, jiggan-gmycin, phenyl acetic acid, azalomycin have been reported from microorganisms as bio-fungicides for agricultural use 7.

Similarly, many plant-based compounds were found efficient in the management of fungal diseases in plants 8. For example, active constituents like carvacrol and thymol proved their efficacy against many fungal species 9-10.

But the use of plant derivatives as bio-fungicides has become virtually nonexistent since 1999 and thus need to rediscover fungicides from plants 11. In the present study, medicinal plant extract in-vitro antifungal activities were evaluated against F. oxysporum (MTCC 284) and C. herbarum (MTCC 351).

Sample Collection and Extract Preparation: Plants parts like leaves, fruits, and seeds were collected as samples from Chandigarh city (30.74°N 76.79°E).  Authentication of plant species was done by correlating their morphological characters with species placed in the herbarium of Panjab University, Chandigarh (PAN).

Total fourteen different plant samples parts Table 1 weighing 50 g each were washed in running water, surface sterilized with one percent mercuric chloride solution, and finally washed in distilled water. They were crushed separately using pestle and mortar by adding double the amount of ethanol, i.e., 100 ml (1:2, w/v), and were allowed to stand overnight for extraction and filtered using Whatman filter paper. The solvent was evaporated using a Rotavapor R-200 (Buchi, Switzerland) the residue was re-dissolved in ethanol.

TABLE 1: MEDICINAL PLANTS BELONGING TO DIFFERENT FAMILIES AND THEIR PART USED IN THE STUDY

Screening for Antifungal Assay: Plant extracts were screened for antifungal activity by agar well diffusion method 13. The ethanol extracts of fourteen different plants were tested against phytopathogens F. oxysporum (MTCC 284) and C. herbarum (MTCC 351). The test phytopathogens were procured from Microbial Type Culture Collection and Gene Bank (MTCC) CSIR-IMTECH, Chandigarh. The fungal suspension (100μl) having OD 2 × 104 CFU/mL were evenly spread over the potato dextrose agar (Himedia, India) plate by sterile cotton swabs. Then wells (8 mm) were made in the medium using a sterile cork borer. Plants extracts (200 μl) of each were transferred into the wells. The plates were then kept at 4 ºC for 30 min for the diffusion and then incubated at 28 ºC for 48-72 h. After incubation, formation of a clear zone around the well indicates antifungal activity of extract and inhibition zone size was recorded.

MIC Values and Thermostability of A. sativum: MIC value of A. sativum ethanolic extract, exhibiting maximum antifungal inhibitory properties, was determined using the broth dilution method. The two-fold dilutions of the plant extract and standard antifungal amphotericin B (1, 2, 4, 8, 16, and 32 µg/mL) in a potato dextrose medium dispensed in tubes containing a minimum volume of 2 mL (macrodilution) according to Wayne (2017) 14.

Then, each tube was inoculated with fungal inoculum prepared in the same medium after dilution of standardized fungal suspension adjusted to 2 × 104 CFU/mL. After well-mixing, the inoculated tubes are incubated at 28 ºC for 48-72 h.

A. sativum ethanolic extract thermostability was checked by subjecting the extract at different temperatures such as 60°, 80°, 100° (for 24 h), and 121 °C for 15 min. The residual antifungal activity was assayed by well diffusion

Effect of A. sativum on Fungus: The effect on morphology of C. herbarum was studied microscopically. Spore suspension (2 × 104 CFU / ml) of C. herbarum was inoculated in potato dextrose broth containing A. sativum ethanolic extract at a concentration of 6 mg/ml. The fungal suspension was also inoculated in another test tube containing PD broth (without extract) and was considered as control. The tubes were incubated at 28 °C for 48-72 h.

After incubation mycelia were taken from the treated and control tube and placed on a glass slide in a drop of sterile water. The coverslip was placed on the film and visualized under bright-field microscope (Nickon H600L, Japan) at 100X, and microphotographs were recorded.

Thin Layer Chromatography: The concentrated plant extract was used for TLC analysis. Commercially available antifungal amphotericin B was used as a reference compound. TLC plates were spotted with the plant extract and antifungal drug. TLC was run in the system containing chloroform: ethanol in ratio 8:2. The plates were dried and chromatogram was developed by keeping TLC plate in iodine saturated chamber for 5-7 min.

The ethanolic extract of A. sativum showed a maximum inhibition zone of 35 mm against F. oxysporum Fig. 2 and 20 mm against C. herbarum. Thus, it was selected for further studies. 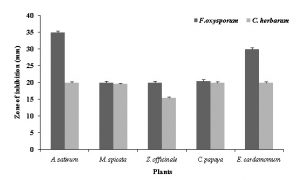 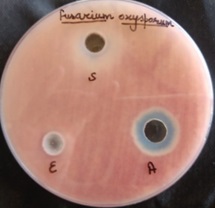 Thermostability and MIC Values: The MIC value of the extract against test fungi was detected by comparing the growth of fungi and tube showing no growth was considered MIC with the amphotericin B (positive control) and ethanol (negative control). The MIC value of A. sativum extract against F. oxysporum and C. herbarum was found to be 60 mg/mL and 120 mg/mL, respectively. MIC value of Amphotericin B against F. oxysporum and C. herbarum was 1.5 µg/mL and 3 µg/mL, respectively. Various researches have studied the antifungal effect of A.  sativum extract and reported different MIC values against fungi and bacteria. A study on Candida albicans showed the MIC value of 0.012 mg/mL 15. In 2018, Danladi and coworkers reported A. sativum extract inhibiting Fusarium spp. and Rhizopus spp at a concentration of 2.5 and 5 mg/mL respectively 16. The result of heat stability assay demonstrated that the extract was stable at temperatures even at 100° upto 24 h. The plant extract did not show any reduction in antifungal activity even after autoclaving (121 °C for 15 min.). Thus, the active compound inhibiting the fungal growth was found to be thermostable. Ankri and Mirelman (1999) have reported that the antimicrobial activity of garlic is due to the presence of compound allicin 17 and it is extremely thermo-sensitive 18. The active antifungal compound present in our extract was found to be extremely stable whereas allicin is relatively stable at a temperature lower than 4°C.

Thus the active components in methanolic extract of A. sativum might be sulfur-containing compounds such as diallyldisulphide (DDS) and diallyl trisulfide (DTS) as they are thermostable and antifungal in nature 19-20. The GC/MS analysis of garlic oil has been reported to contain sulfides, disulfides, and trisulfides as major constituents for its biological activity 21. Further studies on active compounds may yield a potent thermostable bio-fungicide.

Effect of Plant Extract on Fungal Structure: A loopful of culture is taken from the test tubes having normal fungal growth (without treatment), and another from one treated with A. sativum extract and effect of extraction fungal growth was compared. Treated fungus showed the loss of turgidity of mycelium and hypae due to lysis of the cell wall. A. sativum extract caused a significant inhibition in spore germination Fig. 3. 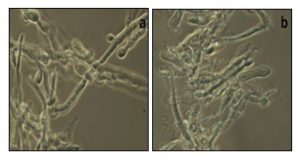 FIG. 3: C. HERBARUM (A) NORMAL MYCELIA AND (B) TREATED WITH A. SATIVU METHANOLIC EXTRACT

TLC Analysis of A. sativum Extracts Components: TLC plate spotted with A. sativum extract was kept in an iodine saturated chamber. After 5-7 min of exposure to the iodine chamber, 5 bands developed on the TLC plate; similar bands were also visible under UV light. TLC fingerprinting confirmed the presence of different constituents based on their polarity. 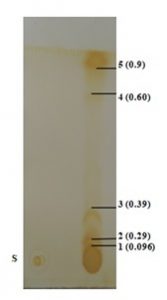 CONCLUSION: In the present study, we explored antifungal potential of A. sativum extract, exhibiting potential anti-fungal activity. The active components in the methanolic extract of A. sativum might be sulfur-containing compounds such as diallyldi-sulfide (DDS) and diallyltrisulfide (DTS) as they are reported to be antifungal and thermo-stable in nature.

A. sativum bioactive component can be used as an effective antifungal agent to combat the menace of resistant pathogens and also in the development of herbal drug which would be environment and humans’ friendly in nature.

Although medicinal plants have been explored much for the traditional treatment of human diseases yet they are potent source for discovering novel antifungal compounds that can be used as bio-fungicide.

ACKNOWLEDGEMENT: We are thankful for the encouragement and support of Dr. Veenita Sharma, Associate Professor, Department of Botany, PGGCG-42 College, Chandigarh.

CONFLICTS OF INTEREST: The authors declare no competing interests.