ABSTRACT: Tinospora crispa, a plant belonging to the family of Menispermaceae is a well-known traditional medicinal plant used in Bangladesh. The methanolic extracts of stems of the plantwere evaluated for their thrombolytic and preliminary cytotoxic activities. The thrombolytic activity was evaluated using the in vitro clot lysis model while while the screening of cytotoxic activity was done using brine shrimp lethality bioassay. Different concentrations of stem extract were made in isotonic saline (2.5, 5, 10 and 20 mg/ml) and added to pre-clotted human blood (n=13) and the clot lysis activity was determined following 90 minute incubation at 37º C. The results showed that T. crispa stem extract induced mild to moderate (14.81- 25.73%) and significant (p <0.001) clot lysis activity whereas the standard Streptokinase (30,000 I.U.) evoked a significant (p < 0.001) clot lysis activity (50.1%). In Brine shrimp lethality bioassay, the LC50 values of methanolic crude extract and its pet ether, chloroform and aqueous fractions were found to be   6.43, 0.8. 4.58 and 7.46  mg/ml respectively which were comparable to the standard vincristine sulphate (LC50:  0.107 µg/ml). The results of the study demonstrated that the stem of the plant possesses promising thrombolytic activity in vitro when tested on human blood as well as preliminary cytotoxic activity on Brine shrimp. However, further study is needed to see its potentiality as thrombolytic medicine.

INTRODUCTION: Hemostasis maintains the integrity of circulatory system after vascular damage.  Circulating platelets are recruited to the site of injury, where they become a major component of the developing thrombus.  Thrombosis is a critical event in the arterial diseases associated with myocardial infarction and stroke, and venous thromboembolic disorders account for considerable morbidity and mortality. Moreover, venous thrombosis is the second leading cause of death in patients with cancer 1. Thrombolytic agents that include tissue plasminogen activator (t-PA), Urokinase (UK), streptokinase (SK) etc. are used all over the world for the treatment of these diseases. In India, though SK and UK are widely used due to lower cost, 2, 3 as compared to other thrombolytic drugs, their use is associated with hyper risk of hemorrhage 4, severe anaphylactic reaction and lacks specificity. Moreover, as a result of immunogenicity multiple treatments with SK in a given patient are restricted 5. Because of the shortcomings of the available thrombolytic drugs, attempts are underway to develop improved recombinant variants of these drugs 6-10.

Plants produce wide array of bioactive principles and constitute a rich source of medicines. In many developing countries, traditional medicine is one of the primary health care systems 11, 12. Large scale evaluation of the local flora exploited in traditional medicine for various biological activities is therefore necessary. Isolation and characterization of the bioactive molecules ultimately lead to new drug development.

In view of this, our attention has been focused particularly in Tinospora crispa; known by various vernacular names such as ‘akar patawali’ or ‘akar seruntum’ is a climber plant belonging to the family of Menispermaceae. T. crispa is an indigenous plant and can be found distributed from the southwestern part of China to Southeast Asia, including Malaysia 13. Traditional folklore attributes various therapeutic uses to its stem for treatment of fever, jaundice, hyperglycemia, 14 hypertension, wounds, intestinal worms and skin infections. It is also used to treat tooth and stomach aches, cough, asthma and pleurisy 15.  Two tri-terpenes are extracted from the stem of T. crispa namely cycloeucalenol and cycloeucalenone 16.

Based on the traditional uses of T. crispa, there has been a substantial increase in the sales of this part of the plant by certain pharmaceutical companies as capsules containing this natural product to treat fever, hypertension, as a diaphoretic tonic and antihyper-glycemic agent. To date, there are numerous studies on this plant emphasizing it’s antioxi-dant, antidiabetic, antimalarial and cosmetic effects. However, limited information is available regarding thrombolytic potential of T. crispa. Against these backgrounds, the present study was undertaken to screen methanolic extract of Tinospora crispa stem for their clot lysis property (thrombolytic activity) by using an In Vitro clot lysis model. The preliminary cytotoxic activities of the plant extract were also investigated by brine shrimp lethality bioassay.

Plant materials:Plant samples of Tinospora crispa was collected from Tangail in March, 2010. One voucher specimen has been deposited in Bangladesh national Herbarium (DACB accession no. 35291). The stem-leaf (after cutting into small pieces) was sun dried for several days. The plant materials were then oven dried for 24 hours at considerably low temperature for better grinding. The dried plant material was then ground in coarse powder using high capacity grinding machine in the Phytochemical Research Laboratory, Faculty of Pharmacy, University of Dhaka.

Preparation of Sample: The crude methanolic extract (600 mg) was suspended in 0.9% NaCl in a volumetric flask and shaken vigorously on a vortex mixer. The final concentration of the mixture was 20 mg/ml. The suspension was kept overnight and decanted to remove the soluble supernatant, which was filtered through a filter paper (Whatman No. 1). The solution was then ready for in vitro evaluation of clot lysis 19, 20. The prepared stock solution was used to make different concentrations of 2.5, 5, 10 and 20 mg/ml for further use.

Streptokinase (SK) Solution Preparation: To the commercially available lyophilized SK vial (Eptase, Beacon Pharmaceuticals Ltd, Bangladesh) of 15,00,000 I.U., 5 ml phosphate buffered saline (PBS) was added and mixed properly. This suspension was used as a stock from which 500μl (30,000 I.U) was used for in vitro thrombolysis 19, 20 as the reference standard for thrombolytic activity.

Specimen: Venous blood (5 ml) was drawn from healthy human volunteers (n = 13) without a history of oral contraceptive or anticoagulant therapy (A consent form was filled up for every volunteers before collecting the blood.). 500 μl of blood was transferred to each of the previously weighed microcentrifuge tubes to form clots 19, 20.

Study design: Venous blood drawn from healthy volunteers (n = 13) was immediately citrated using 3.1% sodium citrate solution [21] and then was transferred in different pre-weighed sterile micro-centrifuge tube (500 μl/tube). Two hundred microlitres of 2% calcium chloride was then added to each of these tubes 22, mixed well and incubated at 37°C for 45 minutes for clotting to occur. Clot lysis activity was determined as described in previous studies 19.

Briefly, after clot formation, serum was aspirated out without disturbing the clot formed and each tube having clot was again weighed to determine the clot weight (Clot weight = weight of clot containing tube – weight of tube alone). Each microcentrifuge tube containing clot was properly labeled and five hundred microlitres of different concentrations of the plant extract, 2.5 mg/ml (n = 13), 5 mg/ml (n = 13), 10 mg/ml (n = 13) and 20 mg/ml (n = 13) or saline (negative control) (n = 13) or 30,000 I.U. of streptokinase [(Eptase, the Beacon Pharmaceuticals Ltd, Bangladesh), reference drug (n = 13)] was added to tubes with clots. All the tubes were incubated at 37oC for 90 min. The fluid left was then carefully removed and the tubes were weighed again.

The difference in weight before and after clot lysis was expressed as % clot lysis. Streptokinase and water were used as a positive and negative (non thrombolytic) control respectively. The experiment was repeated several times with the blood samples of different volunteers.

Statistical Analysis: The results are expressed as mean ± SEM. Statistical comparisons were made using one-wayANOVA with Dunnett t test. Significance was set at p < 0.05. Dose dependencies weredetermined by the regression coefficient (r).

Brine Shrimp Lethality Bioassay: Preliminary cytotoxic activities of the crude ethanolic extract and its different solvent soluble fractions were screened by brine shrimp lethality bioassay 23. Brine shrimp nauplii were obtained by hatching brine shrimp eggs (Phytochemistry Lab, Faculty of Pharmacy,University of Dhaka ) in artificial sea-water (3.8% sodium chloride solution) for 48 h.   4 mg of each of all the test samples (Pet ether fraction, chloroform fraction, aqueous fraction and Crude extract) was taken and dissolved in 200 ml of pure dimethyl sulfoxide (DMSO) in vials to get stock solutions. Then 100 ml of solution was taken in test tube each containing 5ml of simulated seawater and 10 shrimp nauplii.

Then the positive control solutions are added to the premarked vials containing ten living brine shrimp nauplii in 5 ml simulated sea water to get the positive control groups. Artificial sea-water medium containing DMSO that was used for the analysis was used as control. After 24 hours, the vials were inspected using a magnifying glass and the number of survived nauplii in each vial was counted. From this data, the percent of lethality of the brineshrimp nauplii was calculated for each concentration. The median lethal concentration (LC) of the test samples were obtained by plotting percentage of the shrimp killed against the logarithm of the sample concentration. 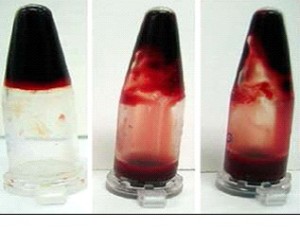 The mean clot lysis % of plant extracts with all different concentration was found to differ significantly when compared with control (i.e, p < 0.001 for all the concentrations).

Brine Shrimp Lethality Bioassay: In Brine shrimp lethality bioassay, the LC50 values of methanolic crude extract and its pet ether, chloroform and aqueous fractions were found to be   6.43, 0.8. 4.58 and 7.46  mg/ml respectively (Table 2). Varying degrees of lethality to Tinospora crispa was observed with exposure to different dose levels of the test samples.

The toxicity to the brine shrimp shown by the pet ether fraction was comparable to that of standards vincristine sulphate (LC50:  0.107 µg/ml) while the other fractions were found to be less toxic than the standard. 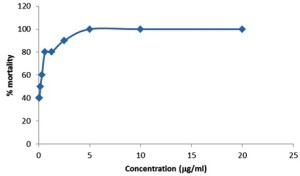 FIG. 2: PLOT OF % MORTALITY OF BRINE SHRIMP VS. CONCENTRATION OF VINCRISTINE SULPHATE 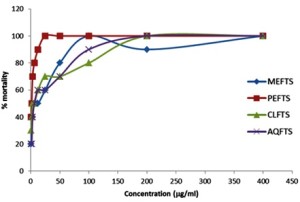 FIG. 3: PLOT OF % MORTALITY OF BRINE SHRIMP VS. CONCENTRATION OF METHANOLIC EXTRACT AND ITS DIFFERENT PARTITIONATES OF STEMS OF TINOSPORA CRISPA

DISCUSSION: This study displays the in vitro thrombolytic potential of crude methanolic extract of  T. crispa stem using human blood. The test model used is a newly developed cheap and simpletechnique which can be performed with limited facilities available in countries likeBangladesh. But this technique is validated, sensitive and reliable. The results show,moderate thrombolytic activity. This is an important finding which may have importantimplications in cardiovascular health. In addition, this finding may indicate the possibility ofdeveloping novel thrombolytic agent/s from the stem of the plant.

The effect shows reverse relation to the doses. One possible explanation is that competitive inhibition of the thrombolytic agents that may present in crude extract. However, further analysis is needed to ascertaining this possibility.

Plasmin, natural fibrinolytic agent, lyses clot by breaking down the fibrinogen and fibrin contained in a clot. Streptokinase forms a 1:1 stochiometric complex with plasminogen that can convert additional plasminogen to plasmin 24. Moreover, phlorotannin, isolated from to marine brown algae, have a unique property of dissolution of intravascular blood clot via antiplasmin inhibition 25 . Since phytochemical analysis showed that the crude extract of T. crispa contains tannin, alkaloid and saponin the clot lysis activity showed by the extract was due to the presence of these phytoconstituents  which might form complexes with plasminogen to produce plasmin.

Brine shrimp lethality bioassay is a rapid bioassay for the bioactive compound of the natural and synthetic origin. This bioassay indicates cytotoxicity as well as a wide range of pharmacological activities such as antimicrobial, antiviral, pesticidal and anti-tumor etc. of the compounds 23. Brine shrimp lethality bioassay technique has advantages to other cytotoxicity testing procedures because it is rapid in process, inexpensive and requires no special equipment or aseptic technique. It utilizes a large number of organisms for statistical validation and a relatively small amount of sample.

Furthermore, unlike other methods, it does not require animal serum. The findings of the study demonstrated that the crude methanolic extract and its different partitioning fractions possess cytotoxic principles and have potential cytotoxic potency. Further bioactivity guided investigation is required to isolate and characterize the potent antitumor and pesticidal compounds.

CONCLUSION: The results of the study demonstrated that the stem of the T. crispa possesses promising thrombolytic activity in vitro when tested on human blood as well as preliminary cytotoxic activity on Brine shrimp. However, further study is needed to see its potentiality as thrombolytic medicine.

ACKNOWLEDGEMENTS: The authors are grateful to the Beacon Pharmaceuticals Ltd. Bangladesh for assistance.