Background: The present study was carried out to investigate the phytochemicals, Total polyphenolic content and In-vitro antioxidant activity of ethanolic and aqueous extracts of Cordia obliqua fruits. Objective: To determine the primary and secondary metabolites present in different extracts, to aces the quantity of phenolic compounds by total phenolic content and to evaluate the % inhibition of free radicals by in vitro antioxidant activity of Cordia obliqua fruits Methods: The plant material was extracted with solvents with increasing order of polarity and phytochemicals were identified by different chemical tests. Preliminary phytochemical studies of fruit extracts of Cordia obliqua revealed the presence of phytoconstituents like glycosides, alkaloids, tannins, phenols, saponins, in the extracts. The different concentration of extracts and standard ascorbic was used to identify the scavenging effect by in-vitro antioxidant models. Results: Phytochemical analysis of extracts revealed the presence of glycosides, alkaloids, tannins, phenols, saponins. The phenolic content in different extracts was found to be 150.16, 174, and 231.39, respectively. The results of in-vitro antioxidant tests suggested that the ethanolic and water extract of Cordia obliqua possesses strong free radical scavenging activity when compared with that of a well known standard anti-oxidant ascorbic acid Conclusion: literature revealed that free radicals are the reason for oxidative stress; which leads to cellular damage and exhibit impact on its function. Many diseases are associated with oxidative stress. The free radicals are neutralized by phytochemical compounds like tannins, phenols. Cordia obliqua fruit extract possesses significant antioxidant activity due to the presence of phytoconstituents.

INTRODUCTION: Natural products, which include plant life, animals, and mineral, had been the idea of treatment of human illnesses1. The history of drugs dates back practically to the existence of human civilization.

The present-day, modern medicinal drug or allopathy has gradually advanced over the years via scientific and observational efforts of scientists. However, the idea of its development remains rooted in traditional medicine and therapies 2. Though, historical information has been the basis of modern medicine and will remain as one crucial supply of destiny remedy and therapeutics 3. The ancient system of medical treatment is predicated on the rich experience of innumerable vaidyas over thousands of years of the citizenry to its credit, to which no modern system of treatment within the world can ordinarily claim. This is often one possible reason why this technique survived critics through the ages and remains catering to the health needs of millions everywhere on the planet. The system is essentially accessible to the common individual due to nature’s bounty to mankind in a wealth of medicinal value 2.

Use of plants and plant-based products are in use for medicinal, therapeutic, or other purposes right from the drawn from history 4. Many traditional systems include plants as their prime source of drugs, and plant drugs served the planet for thousands of years and still provide mankind with new remedies. The plant-based indigenous knowledge was passed down from generation to generation in various parts of the planet throughout its history and has significantly contributed to the event of various traditional systems of medicine 1.

Plant Profile: Cordia obliqua Willd. may be a well-known plant of the Boraginaceae family and belong to Cordia genus. It is distributed throughout mid-Himalayas up to an elevation of 1,470 meters. It is a deciduous tree with a medium size with a height of 10.5 meters. It is commonly referred to as Clammy Cherry, manjack, Clammy Cherry, glue berries, sebesten, or snotty gobbles.

Historically, the plant is used as anthelmintic, expectorant, purgative, diuretic and in the treatment of persistent fever, dry cough, joints pain, spleen diseases, and burning of the throat. The leaves are beneficial in the remedy of headaches and ulcers. Its fruits are sweet and utilized in raw form as vegetables and pickles. Scientifically, this plant is used in hypotensive; respiratory stimulant, diuretic, anti-inflammatory; hepatoprotective and anti-microbial 5. The fruits decrease thirst and are used in scalding the urine, remove pain from the joints, and burning the throat. They are also are effective in diseases of the spleen 6.  Traditionally the fruits are used in the treatment of the hepatic disorder. Since the fruits weren't investigated, the research work was administered to explore the phytochemical and pharmacological importance by evaluation of antioxidant activity of Cordia obliqua fruits.

Plant Material: The fruits of Cordia obliqua were collected within the month of September from Chidambaram, Tamil Nadu, and identified by Dr. P. Shivakumar Singh, Head, and Asst. Professor Department of Botany, Palamuru University and Mahabubnagar. A voucher sample (HPU: 102/2019) was kept within the Herbarium of the Botany Department.

Preparation of the Extract: The fruits of Cordia were collected, shade dried, segregated, pulverized by a mechanical grinder, and skilled a 40 mesh sieve. The powdered plant materials were stored in a well-closed air-tight container. The air-dried powder of 40 mesh size was successively exhausted with different solvents in increasing order of polarity by Soxhlet apparatus viz. petroleum ether, benzene, chloroform, acetone and eventually macerated with water (chloroform water). The solvents were evaporated under reduced pressure to urge semisolid masses. All the extracts were placed in a desiccator for future use.

Phytochemical Investigation: The dried extracts were subjected to varied chemical tests to detect the presence of various Phytoconstituents 8, 9.

1 ml of various concentrations (5, 10, 15, 20, 25 ug/ml) of various extracts were mixed with 1 ml of 95% ethanol, 5 ml of water, and 0.5 ml of 50% Folin-Ciocalteu reagent. The mixture was incubated for 1hr in the dark, and absorbance was measured at 725 nm using UV-Visible spectro-photometer 10. An experiment was performed in triplicate.

DPPH Radical Scavenging Assay Activity of Successive Extracts of Cordia Obliqua Fruits: Each extract was prepared in several concentrations starting from 20 ug/ml to 100 ug/ml and 1 ml solution of DPPH 0.1 mM (0.39 mg in 10 ml methanol) was added to different extracts. An equal volume of ethanol and DPPH was added to regulate. Vitamin C was used as a standard for comparison. After 20 min of incubation in the dark, absorbance was measured at 517 nm 11. An experiment was performed in triplicate.

Determination of Peroxide (H2O2) Radical Scavenging Activity: Each extract was prepared in several concentrations starting from 20ug/ml to100 ug/ml in phosphate buffer saline and was incubated with 0.6 ml of 4 Mm H202 solution prepared in PBS for 10 min 12. The quality vitamin C was used as standard, and absorbance was measured at 230 nm. An experiment was performed in triplicate.

Controls without the test compounds but with equivalent amounts of buffer were conducted in an identical manner. After 5 h 0.5 ml of Griess reagent (1% sulfanilamide, 2% O-phosphoric acid, and 0.1% naphthylethylene diamine dihydrochloride) was added 13. The absorbance was measured at 546 nm. An experiment was performed in triplicate.

Reducing Power Assay: The reducing powers of neutraceutical herbs were determined consistent with Oyaizu (1986). Each extract was prepared in several concentrations starting from 20 ug/ml to 100 ug/ml, and 1ml of every in water were mixed with phosphate buffer (2.5 ml, 2 M, pH 6.6) and potassium ferriccynide (2.5 ml); the mixture was incubated at 500 °C for 20 min. some (2.5 ml) of trichloracetic acid (TCA, 10%) was added to the mixture, which was then centrifuged at 1500 RPM for 10 min. The 2.5 ml of the upper layer of solution was mixed with 2.5 ml distilled water and 0.5 ml of 0.1% FeCl3, and the absorbance was measured at 700 nm. Increased absorbance of the reaction mixture indicated increased reducing power. The reducing power was expressed as AAE means reducing the power of 1 mg sample is like reducing the power of 1 mMol vitamin C 14, 15.

Statistical Analysis: Inhibition of concentration and total phenolic and antioxidant were determined by linear regression analysis method, which was used to calculate IC50. Results were expressed as mean ± SD (standard deviation) n =3.

Results and Discussion: The Cordia obiqua fruits were successively exhausted with different solvents in increasing order of polarity by Soxhlet apparatus viz. petroleum ether, benzene, chloroform, acetone, and eventually macerated with water (chloroform water). The solvents were evaporated under reduced pressure to urge semisolid masses. The color, consistency, and percentage yield were calculated with air-dried material. The % yield of various extracts was found to be 0.276, 0.12, 0.3, 1.08, 6.2, respectively with regard to air-dried powder material 12. 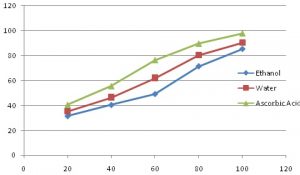 Total Phenolic Content: Phenolic compounds are a category of antioxidant agents, which act as radical terminators 16. Total phenols were measured by Folin-Ciocalteu reagent in terms of Gallic acid equivalent. The compounds like phenols and tannins contain hydroxyls, which are liable for the novel scavenging effect of plants 17. The hydroxyl groups in plant extracts are liable for facilitating radical scavenging activity. Consistent with our preliminary identification, the high contents of this Phytochemical were present in ethanolic and aqueous extract of Cordia obliqua fruits which explain its high radical scavenging activity.

Assessment of Anti-oxidant Activity: The evaluation of anti-oxidant activity was done with ethanolic and aqueous extracts through various in-vitro assays. The radical scavenging activity of various extracts of Cordia obliqua fruits and L-ascorbic acid (vitamin C) was measured in terms of hydrogen donating or radical scavenging ability using the stable radical DPPH, peroxide, nitric acid inhibition was calculated. The activities of the extracts are further confirmed by the reducing power method.

DPPH Radical Scavenging Activity: DPPH may be a stable radical at normal temperature. It shows specific absorbance at 517 nm thanks to color of the methanolic solution of DPPH. The body generates many free radicals in the normal metabolic process, which is assumed the same as DPPH 18. A decrease in absorbance of the mixture indicates the novel scavenging activity. The ethanolic and aqueous extract exhibited the scavenging action in comparison with vitamin C. The IC50 of the ethanolic and aqueous extracts is given in Table 2 and in Fig. 1.

The percentage inhibition of both extracts in comparison with ascorbic acid are mentioned in Table 3 and Fig. 2. 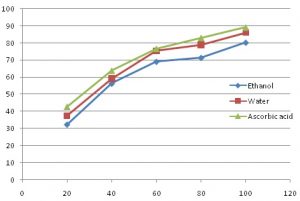 Nitric Oxide Radical Scavenging Activity of Plant Extract and Vitamin C: Nitric Oxide (NO), a reactive radical generated from L-arginine by nitric oxide synthase, is well documented as a physiological messenger molecule. Increased concentration of gas is potentially toxic and is implicated in numerous pathological situations and chronic inflammation 20, 21. Scavenger of nitric oxide competes with oxygen resulting in reduced production of gas, suggesting that the extracts showed antioxidant activity. The radical scavenging activity of ethanolic and aqueous extracts is given in Table 4 and Fig. 3. 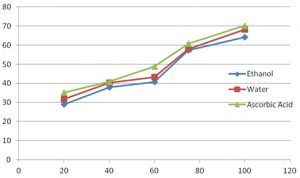 Reducing Power of Plant Extract and Vitamin C: In reducing power assay, the presence of anti-oxidants within the sample reduced Fe3+ / ferric cyanide complex to the ferrous form. This reducing capacity of compounds could function as an indicator of potential antioxidant properties, and increase in absorbance indicates a rise in reducing power 22, 23. The best reducing power was obtained from vitamin C, followed by water and ethanolic extracts. Our results showed that the extracts may act as an electron donor and will react with free radicals and converting the free radicals to more stable products, and terminate radical chain reaction. The ability of the ethanolic and aqueous extracts to reduce the free radical along with standard is mentioned in Table 5 and Fig. 4: 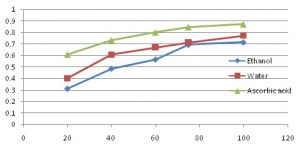 CONCLUSION: The results of in-vitro antioxidant tests suggested that the ethanolic and alcoholic extract of Cordia obliqua possesses strong radical scavenging activity in comparison thereupon of a documented standard anti-oxidant vitamin C, which could exert beneficial action against pathological alterations caused by the presence of hepatotoxins.

The phenolic compounds, tannins, alkaloids within the extracts are liable for in-vitro antioxidant activity. However, the components liable for the anti-oxidative activity are currently unclear. Therefore, further investigations got to be administered to isolate and identify the antioxidant compounds present within the plant extract, and therefore the in-vivo antioxidant activity of this extract must be assessed before clinical use, which helps to document the in-vivo hepatoprotective activity of fruits of Cordia obiqua.