ABSTRACT: The present study was undertaken to evaluate the wound healing activity of leaf extract of Dodonaea viscosa Jacq in diabetic wistar albino rats. Wound is defined as a loss or breaking of cellular and anatomic or functional continuity of living tissue. Normal wound healing response begins the moment the tissue is injured. Wound healing is the process of repair that follows injury to the skin and other soft tissues. For the study, various excision, incision and granuloma pouch models were used. In each model, animals were divided into three groups (n=6). Group I was control group, Group II was treated with silver sulfadiazine and Group III was treated with ointment of Dodonaea viscosa. In excision wound model, the significant (p<0.001) increase in rate of wound contraction was observed. Also, there was increase in rate of reepithelization, matrix density and capillary number. The collagen content was found to increase as compared to control. In incision wound model it was found that there was increase in tensile strength. Cotton pellet model supports the anti- inflammatory activity of Dodonaea viscosa plant The present study suggested that the topical administration of ethanol extract of Dodonaea viscosa in form of ointment plays a major role in diabetic wound healing. Our present documented findings may suggest the use of Dodonaea viscosa to treat diabetic wounds.

INTRODUCTION: Wound may be defined as a loss or breaking of cellular and anatomic or functional continuity of living tissue 1. Cutaneous injury is characterised by fibroplasia, angiogenesis and re-epithelisation and involves the migration and proliferation of cells such as fibroblasts, endothelial cells and epithelial cells, deposition of connective tissue and contraction of the wound. These steps are controlled by different kind of bioactive molecules like growth factors, cytokines its receptors and matrix molecules.

Such a controlled phenomenon can be disrupted in diseases like diabetes, immune compromised persons, ischaemia etc. thus leading to the development of a chronic wound. Prolonged or incomplete wound healing is then a troublesome complication. Efforts are being made all over the world to discover agents that can promote healing and thereby reduce the cost of hospitalisation and save the patient from amputation or other severe complications 2, 3, 4.

Dodonaea Viscosa Jacq (DV) belongs to Sapindaceae family and is a small evergreen tree of variable size, found both wild and cultivated throughout India. Common in hotter parts of India, cultivated in gardens, village, roadside, found in wild, tropical forest and in Western Ghats of Karnataka and Maharashtra.

Reported pharmacological activities of plant include antimicrobial, anti-inflammatory and antispasmodic activity. It possesses febrifugal and sudorific properties and also used for stomach disorders.

The leaf powder was used traditionally in burns treatment of scalds and as an anti-infective agent. The present study was designed to test the possible wound healing activity of DV in form of ointment in diabetic rats.

Preparation of extracts of Dodonaea viscosa Jacq: The leaves of DV were collected from Saswad region, in the month of October and authenticated at Pune. The shade dried leaves were cut into small pieces and were powdered mechanically to obtain a coarse powder. The coarse powder was then stored in clean dry air tight container. The powdered material was subjected to maceration.

The solvents used were ethyl alcohol (95%) and distilled water. The powder material of DV was evenly packed in conical flask (2 liter capacity) for extraction for about 7 days with different solvents. Then the macerated product was filtered using muslin cloth with cotton and resultant product was kept in water bath to get a final product. Ethyl alcohol extract was subjected for preliminary phytochemical investigation.

Experimental animals: Animals were divided into three groups. Group I was served as control. Group II was treated with silver sulfadiazine and Group III was treated with 10% of plant extract. Albino Wistar rats (150-200g) were obtained from animal house facility of Smt. Kashibai Navale College of Pharmacy, Pune and were housed in clean cages and in a well-ventilated facility with free access to standard feed and drinking tap water.

The animals were kept at room temperature (28±2oC) with a 12 h day light/ dark cycle under humid tropical conditions. All procedures involving the use of laboratory animals were in accordance to the CPCSEA and were approved by the institutional animal ethical committee.

Treatment protocol: Induction of diabetes: Diabetes was induced by a single subcutaneous injection of freshly prepared Alloxan at the dose of 100 mg/kg to overnight fasted rats. After 48 hr of Alloxan administration blood glucose level was estimated by using standard kit glucose oxidase method 5. Animals with blood glucose level above 150 mg/dl were selected for further wound models.

Preparation of ointment: Simple ointment of DV extract (10%) was prepared and applied twice daily on the wound.

RESULTS: Excision model showed the significant increase (p<0.001) in rate and percentage of wound contraction observed on 16th day as per Table 1. In incision wound model the drug significantly increases the rate of contraction which was proved by increased tensile strength as shown in Fig. 2. The force required to break the healed wound was more, which indicates the increase in matrix density.

Thus, less inflammation and thereby excaudate was observed. Increase in collagen content was expected in the treatment and the same was observed as mentioned in Table 2.

Values are expressed as mean±SEM (n=6). *Comparison with control.

Values are expressed as mean±SEM (n=6). *Comparison with control

Values are expressed as mean±SEM (n=6). * Comparison with control

DISCUSSION: The wound-healing process differs from tissue to tissue; there are more similarities than differences between them. In this discussion, skin is considered as a representative tissue type. Different types of wounds involve different phases of the healing process to varying degrees, although the phases themselves remain the same. 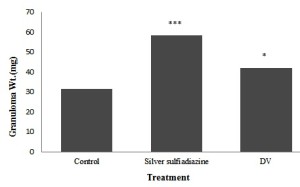 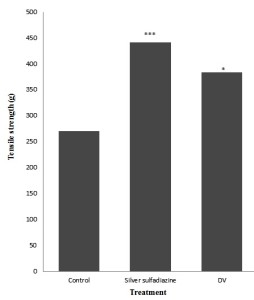 In excision wound model, the significant (p<0.001) increase in rate of wound contraction was observed also there was increase in rate of re-epithelisation, matrix density and capillary number. The collagen content was found to increase as compared to control. In incision wound model, it was found that there was increase in tensile strength. Cotton pellet model supports the anti- inflammatory activity of DV plant. The observed increased in the tensile strength and collagen content of the granulation tissue of the excision wounds indicates rapid wound healing process.

DV revealed the presence of flavonoids, tannins, saponins and coumarins as bioactive antidiabetic principles. Burn wounds were also healed with higher rate and this may be because of antioxidant activity. As the antidiabetic activity of leaf of DV is well proven, this plant decreases the over load of glucose or it may improve the rate angiogenesis and help in healing of wound. Thus, the observed wound healing activity of title plant may be attributed to the presence of these bioactive principles and their synergistic properties.

CONCLUSION: The present study suggested that the topical administration of ethanol extract of DVin form of ointment plays a major role in diabetic wound healing. Our present documented findings may suggest the use of DV to treat diabetic wounds.

Authors are thankful to University of Pune and Smt. Kashibai Navale College of Pharmacy, Kondhwa (Bk), Pune -48 for providing funding assistance for study.