ABSTRACT: The persent study was designed to investigate the anxiolytic activity of ethanolic extract of Leptadenia reticulata plant. It is a folk medicine traditionally used in treatment of eye diseases, seminal debility, general weekness, cough, fever, asthma, sore throat and gonorrhea. The anxiolytic activity was evaluated by Elevated plus maze Test, Light-Dark Test, Hole-board Test and Social-intraction Test models by using Wistar albino rats. The extract at oral dose 200mg/kg and 400mg/kg at body weight significantly increased time spend and no of entries in open arms in Elevated plus maze test and time spend in light area in light-dark test and no of head dipping in hole board test and also inceased social interaction time in social interaction test as compard to control animals. The effect was compared to the Diazepam (2mg/kg i.p.) as standard anxiolytic drug. The result of study indicate that the Leptadenia reticulata plant have potant anxiolytic activity.

INTRODUCTION: Anxiety  disorders  are  the  most  prevalent mental  health  condition  affecting  about  7-30%  of  the world  population  and it is one  of  the most  commonly encountered  problems  in  the  psychiatry  outpatient department. 1 Anxiety,  a  state  of  excessive  fear,  is characterized  by  motor  tension, sympathetic hyperactivity, apprehension and vigilance syndromes. Anxiety may interfere with intelligence, psychomotor function and memory. 2 The  benzodiazepines  are considered  the  drug  of  choice  in  the  treatment  of anxiety. Unfortunately, there are several unwanted side effects. Therefore the development of new pharmacological agents from plant sources are well justified.

Leptadenia reticulata commonly known as ‘Jiwanti’ is belong to the family Ascelpidiaceae. It is much branched twining shrub and grows in Gujarat, sub- Himalayan tracts from Panjab to Sikkim and Khasi hills and throughout paninsuler india, ascending upto an altitude of 900 m. 3 The main constituents reported are Stigmasterol, β-sitosterol, Flavanoid, Pregnane glycosides and Protein.4

The purpose of persent study was to evaluate the anxiolytic activity of ethanolic extract of Leptadenia reticulata plant.

Plant collection and Authentication: The collection of plant materials of Leptadenia reticulata was done in month of  January 2015 from CAJRI(Central Arid Zone Research Institute) of Jodhpur, Rajasthan and the identified and authenticated by S.L. Menna, Scientict C & H.O.O Botanical survey of India, Jodhpur, Rajasthan (voucher specimen no: BSI/AZRC/I.Tech./2014-15/(PI.Id.)/779) and submitted at G.D. Memorial College of Pharmacy, Jodhpur, (Rajasthan), dated 2-2-2015.

Preparation of plant extract: The whole plant parts of plant were washed and dried under shade for 7 days at temparture 20-25ºC. Cleaned and grind with help of iron Morter pestle. The powders (40 size mesh) were used for the soxhlet extraction. Plant material 20 g was extracted with 250 ml of petroleum ether in soxlet apparatus for 40hrs at temp.60-800C to defatt the powder and then mark was extracted with 250 ml ethanol (70%) for 72 hrs at temp.75-800C. The extracts were collected and evaporated to dryness to give dry crude extract. The yield of ethanolic extract was 8.50%w/w. The obtained extracts were subjected to phyochemical investigation.

Chemicals: Diazepam 5mg/2ml (Zem Lab Pharmaceuticals) from local market of Jodhpur and all other chemicals and reagents were used of analytical grade.

Phytochemical Screening: Ethanolic extract of Leptadenia reticulata plant was screened for presence of secondary metabolites such as alkaloids, saponins, glycosides, flavonoids, steroids, and triterpenoids. The screening was done using standard protocol described in Khandelwal and Kokate.15, 16

Acute Toxicity Study: Acute toxicity tests were performed in Wistar albino rat and all animals were fasted overnight before treatment. A single high dose (3000mg/kg), as recommended by the OECD guidelines, was administered orally to rat (3 male and 3 females, respectively). General behavior was also observed at 1, 3 and 24 h after administration. The number of animals that died after administration was recorded daily for 14 days.17

Elevated plus maze test: The anxiolytic activity of ethanolic extract of plant was studied using elevated plus maze model in wistar albino rat. The elevated plus maze consisted of two open (30 x 5 cm x 0.2 5 cm) and two closed (30 cm x 5 cm x 15 cm) arms, extending from the central platform (5 cm x 5 cm) and elevated up to the height of 50 cm above the floor. The entire maze was made of wood. Wistar albino rats weighing 200-250 gm divide in to four groups of six animals each. Standard drug (Diazepam) was administered i.p. 30 min prior to testing and extracts were administered p.o 45 min prior to testing.  Rat  individually placed on the centre of the maze facing an open arm, and the number of entries and the time spend in closed and open arm were recorded during a 5 min observation period. Arm entries were defined as entry of all four paws in to the arm.18

Light-dark test: The  apparatus  consisted  of  two  20cm×10 cm×14 cm plastic boxes one was dark the  other was  transparent.  The  rat  were  allowed  to  move from  one  box  to  the  other  through  an  open  door between  the  two boxes. A 100W bulb placed 30  cm above  the  floor  of  the  transparent  box was  the  only light  source  in  the  room. Wistar albino rats weighing 150-250 gm divide in to four groups of six animals each. Standard drug (Diazepam) was administered i.p. 30 min prior to testing and extracts were administered p.o 45 min prior to testing. A rat was put into the light box facing the hole. The transitions between the light and the dark box and time spent in the light box were recorded for 5 min immediately after the rat stepped into the dark box.18

Standard drug (Diazepam) was administered 30 min prior to testing and extracts were administered p.o 45 min prior to testing. They were housed singly for 5 days before the experimental test, and were allowed food and water ad libitum. During this period they were weighed and handled daily and the position of the cages in the rack was changed so that all rats received equal experience of the different levels of illumination. The rats were randomly assigned to ‘low light and unfamiliar’ test conditions. The test box was (22 x 15 x 12 cm) and pairs of rats were placed in this box for 5 min and their behaviour observed. The following behaviors were included sniffing, nipping, grooming, following, mounting, kicking, boxing, wrestling, and jumping on, crawling and under or over the partner.19

Hole board test: The hole-board test focuses on specific head dipping behaviors. The hole-board apparatus was an open-field with 16 equally spaced holes of 3 cm diameter in the floor. Wistar albino rats of either sex were dividing into four groups of six animals each. Standard drug (Diazepam) was administered i.p. 30 min prior to testing and extracts were administered p.o 45 min prior to testing. Each rat was placed in turn at one corner of the board with the animal subsequently moving about an subsequently moving about and dipping its head into the holes. The number of head dips and sectional crossings in 5 min. were recorded for individual rat.20

Acute toxicity study: The acute toxicity study and also reported that the Lithal dose was found to be 3000mg/kg body weight for the extract. Hence the therapeutic dose were taken 200 mg/kg and 400mg/kg for ethanolic extract of Leptadenia reticulata plant.

Elevated plus maze test: In the elevated plus maze test result showed (Table 2) that ethanolic extract of L.reticulata plant at dose 200mg/kg and 400 mg/kg treated rat exhibited increases the time spent and the number of entries in open arms but decreases in time spent and number of entries in close arms according to dose as compared to the standard drug Diazepam at 2mg/kg.(Fig. 3, 4 )

Light dark test: In the light dark test result showed (Table 3) that ethanolic extract of plant at dose 200mg/kg and 400mg/kg  significantly increase the time spent and number of transitions in light area. Similar effects were observed with diazepam (2mg/kg) when used as standard drug for light and dark model. (Fig. 5) 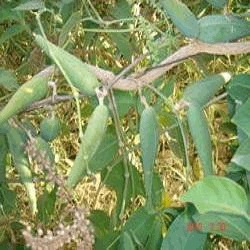 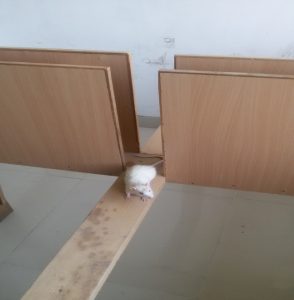 FIG. 2: EFFECT OF ETHANOLIC EXTRACT OF L.R. LANT ON  ELEVATED PLUS MAZE TEST 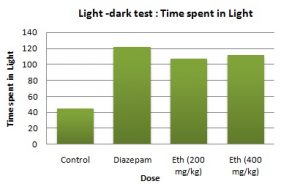 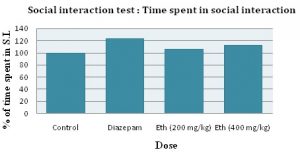 FIG. 7: RESULT OF HOLE BOARD TEST OF ETHANOLIC EXTRACT OF L.R. PLANT

In the present study demostrated anxiolytic activity of ethanolic extract obtained from Leptadenia reticulata plant in rat by Elevated plus maze, Light- dark test, Social intraction test and Hole board test models. Rats were selected for evaluation of anxiolytic activity in experimental model because rats express robust anxiety-like behaviors when exposed to stressors (e.g., novelty, bright light or social confrontation), these phenotypes have clear utility in testing the effects of psychotropic drugs.21

Elevated plus maze is used to evaluate psychomotor performance and emotional espects of rats 22. Result showed that ethanolic extract of plant at both dose 200mg/kg and 400 mg/kg treated rat exhibited significant increases the time spent and the number of entries in open arms but decreases in time spent and number of entries in close arms according to dose as compared to Diazepam as standard drug reflects plants anxiolytic property.

The light –dark test is also widely used for rats as an animal model for evaluation of anxiolytic or anxiogenic drugs. It is based on the innate aversion of animals to illuminated areas and on spontaneous exploratory behaviour inresponse to mild stressors.18 The result showed that ethanolic extract of plant at dose 200mg/kg and 400mg/kg  significantly increase the time spent and number of transitions in light area.

Similar effects were observed with diazepam (2mg/kg) when used as standard drug for light and dark model.

The social interaction test was the first animal test of anxiety, which used a natural form of behavior as the dependent measure. In this test low light and unfamiliar condition is used that generate moderate level of anxiety. 23 Ethanolic extract at 200mg/kg and 400mg/kg significantly increased the time of social interaction in low light and unfamiliar condition, that suggest of anxiolytic effect of plant extract.

In the Hole board test, the ethanolic extract of plant at dose 200mg/kg and 400mg/kg showed significant increase in the number of head dipping and line crossing. This indicates the anxiolytic activity of plant extract. 24 It may possible that the mechanism of anxiolytic action of ethanolic extract of Leptadenia reticulata plant could be due to any of these phytochemicals to the GABA A-BZD complex.

I extend my sincere thanks towards Mr. Anil Kumar Verma Sir, Assistant-prof., Department of Pharmacology, Mr. Somdutt Gupta Sir for their help and constant support.