ABSTRACT:The common cause of leg ulceration in Western countries is venous disease of the lower limb.Venous insufficiency causes appreciable disability. Venous ulcer is one of the most prevalent diseases in the western countries and India, which can hamper personal and professional life of individual. After various methods of modern medicinal treatment and management  there is a chance recurrence .This case study  is a prospective and intervention to combat long standing & recurring venous ulcer  aided by Homoeopathy.

INTRODUCTION:The incidence of venous ulcer in the lower limb due to venous disease is about 60% to 70% of all ulcer of lower limb. Characteristically, the venous ulcer develops in the gaiter area of the lower leg, medially from the instep to above the ankle. Malignant change may complicate a long-standing venous ulcer 1. Venous ulcers are accompanied by lipodermatosclerosis and haemosiderosis 1, 2, 3.

By the modern medicinal treatment different bandaging regimens, compression stocking, different surgical method have been used 1, 2. Different antibiotics do not hasten ulcer healing in absence of cellulitis and other specific ulcer healing medicines are of suspicious validity.  After various methods of modern medicinal treatment there is a 20-30 per cent incidence of reulceration by five years 1.

By the alternative way of treatment introducing of low cost medicine may eradicated the venous ulcer.

Material and Method:  Taking of the case, find out totality of symptoms. Selected the similimum on basis of individualize of the patient and miasmatic consideration. A 30 years old male presented with venous ulcer at Homoeo specialty clinic, Uluberia Subdivisional Hospital, Uluberia, Howrah, Govt. of West Bengal on 09/06/2011. Patient written consent was taken for study.

Chief complaint with duration : An ulcer on right leg, near medial malleolus (Fig. 1) and having varicosity of lower limbs and thin discharges was came from it, for 8 years.

On examination: An ulcer measure 3.5cm X 2.5cm with stepping margins. Floor- yellowish pink, Edge-irregular but well defined, thin discharges were coming from it, dark pigment around it.

Past History: Leg injury at childhood, carbuncle at 20 years age.

1)      Ulcer on right leg, near medial malleolus and having varicosity of lower limbs and thin discharges from it,

Treatment and followup: Natrum mur 200 was prescribed orally along with Calendula Q for dressing the ulcer which improved the discharge from the ulcer but there was no sign of healing. Arnica 200 was prescribed after 5 days based on strong history of injury. The ulcer started healing but a burning sensation appeared at the ulcer side.

Arsenicum album 30 was prescribed after 2 months. In the next visit after 6 days, the burning disappeared but the patient developed a cough which was unrelated to the disease. On the basis of present symptoms Ipecac 30 was prescribed. Patient visited the OPD after 1 month and the ulcer heal by 75% (Fig. 2).

Chief complaint with duration:  ulcer on right leg, near medial malleolus and having varicosity of lower limbs.

1)      Ulcer on right leg, near medial malleolus and having varicosity of lower limb

Treatment and follow up: After re-case taking Nat sulph 200 was prescribed. Patient return after 8 days as the discharge started from the ulcer. Re-case taking was done.

Chief complaint: ulcer on right leg, near medial malleolus and having varicosity of lower limbs and thin watery discharge emited from it.

1)      Ulcer on right leg, near medial malleolus and having varicosity of lower limb and thin discharge was came from it.

Treatment and follow up: Lycopodium 1M was the simillimum. After 11 days, no such result occurs except the changes in discharge that was thick and yellow matter. According to the character of pus, Calc sulphur 30 was prescribed. No discharge with healthy granulation tissue at ulcer site, but still few cracked area remain and slight pain appeared. Silicea 200 was prescribed which completed the case (Fig. 3).

RESULT: Ulcer on right leg near medial malleolus (fig. 1) has been disappeared after completion of treatment (fig. 3). 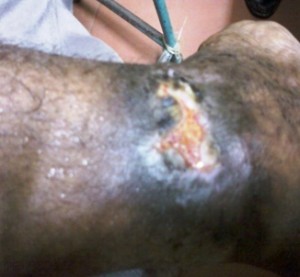 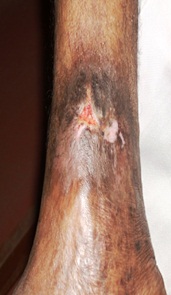 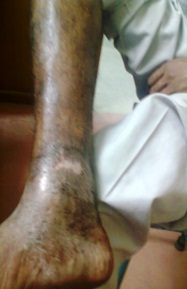 DISCUSSION: After going through the case, I diagnosed the venous ulcer as a professional hazard but the person must continue his profession.

However, disease must be brought out in symptoms, with the end of its becoming a likeness of some remedy of the Materia Medica. All the diseases known to man have their likeness in the Materia Medica and the physician must become so conversant with this art that he may perceive this likeness. All the senses must be on the alert in order to perceive that which similar, and most similar 5. After taking of the case, find out totality of symptoms and I selected the similimum and before prescribing I had verified every time with Materia Medica. For rapid and gentle cure, I had find out the uncommon, peculiar, rare symptoms of the case. The objective of this study was to evaluate the role of classical Homoeopathy in venous ulcer and larger trials in future may suggest.

Calendula officinalis is one of the most remarkable healing agent 5. These medicines, I have used locally to cure the ulcer. By alternative way of treatment oral introducing of small doses of less expensive medicine and regularly dressing with calendula Q the venous ulcer was disappeared as well as varicosity of leg may disappeared permanently. Discharges from the ulcer also disappeared. Venous ulcer is not appeared again after completed the treatment.

CONCLUSION: By means of nano pharmacology like Homoeopathy including oral and local application of medicine ameliorates venous ulcer and varicosities of leg within very short span of time.

ACKNOWLEDGEMENT: With a profound sense of gratitude, I express my sincere respect to the Director of Homoeopathy, Govt. of west Bengal and Superintended, Uluberia Sub Divisional Hospital, Howrah, Govt. of West Bengal for allow me to conduct the work.