EVIDENCE FOR COMPLEX FORMATION OF IBUPROFEN WITH GO-GHRITA

EVIDENCE FOR COMPLEX FORMATION OF IBUPROFEN WITH GO-GHRITA

ABSTRACT: Present investigation provides evidence for complex formation of Ibuprofen (Ib) with Go-Ghrita (GG).  Ibuprofen binary mixture in (1:0.5), (1:1), (1:2), (1:3) w/w proportions were prepared by adding to molten Go-Ghrita kept over a water bath at 65-70oC with continuous stirring. Organoleptic and Physico-chemical properties of GG (procured from Magan Sangrahalaya, Wardha) were as per the specifications given in Ayurvedic Pharmacopoeia (AP) and Indian Pharmacopoeia (IP). All proportions were subjected for FT-IR and in-vitro release behaviour (SGF, PH 1.2 for 2 Hrs and SIF, PH 6.8 for 7 Hrs) and on basis of it, optimized (1:1) w/w proportions were further analyzed and characterized for Differential Scanning Calorimetry, X-ray diffraction, Nuclear Magnetic Resonance and Scanning Electron Microscopy. Carbonyl stretching of isopropionic acid group to slight higher frequency 1.39 % cm-1 (increase) and (–C=O) linked (-OH) band stretching to slight lower frequency 1.09 cm-1 (decrease) shown in FT-IR spectra, supported by in-vitro release of Ibuprofen 99.16±0.17% of (1:1) w/w in sustenance form than remaining. Exclusion of polymorphic modification in X-RD, Slight lowering of 50C Tm and enthalpy change of 5.70 % (loss) in DSC, deviation in chemical shift (ranging from -0.041 to +0.030) as well as selective broadening of signals in NMR and entrapment of Ibuprofen crystals in Ib-GG binary mixture shown in SEM photographs, reflecting possible evidence for the formation of inclusion type complex between Ibuprofen and GG

Among these fatty acids, palmitic acid, a 16:0 saturated fatty acid, constitutes 29.95%, while oleic acid, which is 18: 1 monounsaturated acid with a double bond between 9-10 carbon atoms, is present to the extent of 27.42%2. GG has been shown to exhibit excellent wound healing property 3 as well as substantial anticonvulsant action 4.

A formulation containing some herbs and GG has been shown to exert remarkable memory enhancing activity 5 and patented in U.S. as an ointment base 6. Literature repleting with reports on use of GG in designing the sustenance release formulation 7, as well as few of its interaction study with NSAIDs like Acetaminophen 8-10 and Diclofenac sodium 11 with use of several sophisticated analytical techniques.

Keeping in mind all such few and rare interactions study of NSAIDs with GG, attempt has been made to examine the nature, type of interaction and complex formation of non reported Ibuprofen NSAID with GG (composing saturated and unsaturated fatty acids). To investigate such phenomenon one or more sophisticated analytical techniques like FT-IR, cumulative % Ibuprofen release from binary mixtures (1:0.5), (1:1), (1:2), (1:3) w/w proportions, DSC, X-rd, NMR and SEM were studied. In addition to this preliminary analysis of GG were carried out prior its used to confirm purity in binary mixture.

Ibuprofen12 – BCS class II drug, is most frequently used over-the-counter analgesics, due to its proven efficacy and low cost. Chemically, Ibuprofen (Fig. 1) is 2-[4-(2-methylpropyl) phenyl] propanoic acid, which has one chiral center, and thus there are two equal amounts of (R-) and sinister (S+) enantiomers.

Ibuprofen BP as a gift sample was kindly supplied by Zim Laboratories Ltd., Kalmeshwar, Nagpur. Go-Ghrita was purchased from Magan Sangrahalay, Wardha, India. All other chemicals and reagents used were of analytical grade and were procured.

Colour, Odour, Taste and Texture of GG sample was evaluated as described in AP13.

Physical characterization: Moisture content and Refractive index (reading at 400C) of GG sample was determined by the method described in AP13.

Acid and Saponification values of GG were determined as per the method described in AP13.

Iodine and Peroxide values of GG were determined by pyridine bromide method and titration method as described in AP13.

Ester value, difference between Saponification value and Acid value was determined as described in AP13.

Sample response for this test is checked to verify purity and adulterant present in it, as described in AP13.

Free fatty acids levels of GG sample was determined by the method as described in AP13 and IP14.

To the molten GG kept over a water bath at 65-70oC an amount of Ibuprofen was added and uniformly dispersed by continuous stirring to prepare (1:0.5), (1:1), (1:2), (1:3) w/w proportions. The 1:0.5 to 1:3 w/w proportions were selected for observing minimize to maximize the interaction (if any) 15 involved in it. The fused mixtures were homogenized and allowed to cool slowly to room temperature with stirring.

Fourier Transform Infrared Spectroscopy (FTIR) is a rapid analytical technique that measures vibrations of bonds within functional groups. FTIR spectral studies were carried out using FTIR spectrometer (Perkin Elmer Spectrum 2000, Norwalk, CT). Ibuprofen, GG and their binary mixtures (1:0.5), (1:1), (1:2), (1:3) w/w proportions were smeared onto KBr windows and the spectra were recorded from 500 to 3500/cm.

Scanning of Ibuprofen was carried out in both SGF and SIF between 200-400 nm and λmax was reported to be at 264 nm. Absorbance of standard calibration curve of Ibuprofen in SGF and SIF were analyzed, after adequate dilutions, at λmax 264 nm on UV Spectrophotometer (UV-1700; Pharmaspec, Shimadzu, Japan) equipped with UV probe software (2.01 version). Data was depicted in Microsoft excel and had correlation coefficient (R2) 0.997, 0.998 and equation of regression lines Y = 0.018X - 0.002 and Y = 0.020X - 0.001 respectively.

The percent drug content of each binary mixture were determined. Weighed accurately about 50 mg of Ibuprofen binary mixtures (1:0.5), (1:1), (1:2), (1:3) w/w proportions and dissolved in 20 ml of alcohol using the magnetic stirrer for 20 min. To the solution obtained, simulated gastric fluid or simulated intestinal fluid was added and volume was made upto 100 ml. It was then filtered through Whatman filter paper no. 42 and required dilutions were made and absorbance was taken at 264 nm.

5-10 mg of Ibuprofen sample, GG and their 1:1 w/w binary mixture was weighed into pin holed platinum pans (TG/DTA instruments) and heated under dry nitrogen in 0 - 3400C scanning range at a rate of 100C/min. An empty pan was used as reference. Experiments were carried out in duplicate.

X-ray diffraction of Ibuprofen, GG and their 1:1 w/w binary mixture was carried out on a Rigaku Rotating Anode Diffractometer RUH3R (Tokyo, Japan). Measurement conditions were 40 kV, 30 mA current, at a scanning speed of 20/min, step size 0.02 and scanning range from 10–800 2Theta.

NMR spectra (using Bruker DRX-300 MHz) for Ibuprofen, GG and their 1:1 w/w binary mixture were recorded in the solvent (CD3OD: CDCl3 3:1, v/v), using tetramethylsilane (TMS) as an internal standard. Samples (in solution form) were equilibrated in the probe 5 min prior each run.

The t-test was performed on all collected mean data obtained from physiological evaluation as well as dissolution studies. Significance was accepted at p≤0.0516.

Physico-chemical properties of GG given in Table 1 revealed the purity and adulterant free GG. All the tested parameter of GG passes the standards and limit given in Ayurvedic Pharmacopoeia13 and Indian Pharmacopoeia14 respectively.

All the determinations are carried out five times with significance (p≤0.05)

Fig. 2 showing FT-IR spectra of Ibuprofen (A), GG (B) and binary mixture of Ib with GG in different w/w proportions (C – F), reveling retention of characteristics bands as reported in literature 17, 19.

The ability of the GG to form a complex with Ibuprofen depends on the nature of the core-surface groups of GG (composed of saturated and unsaturated fatty acids), electrostatic interactions between the GG and the Ib, and the ability of the Ib to form a conjugate with the GG through chemical bonding. One might expect that the Ib with the carboxylic group may form a complex with surface unsaturated -C=C- fatty acids group (may exists as dimer involving hydrogen bonding) 19 of GG and may physically encapsulate the Ib. 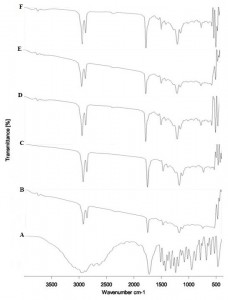 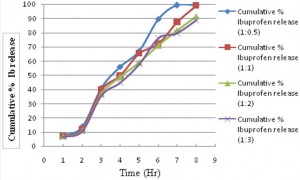 The DSC thermograms of Ibuprofen, GG and Ib-GG 1:1 w/w proportions are presented in Fig. 4. The following general results can be derived from Table 6, 7 the melting temperature of binary systems (Fig.4C) are lower than those of single Ibuprofen (Fig.4A). The thermogram of Ibuprofen-GG 1:1 w/w records two sharp endothermic peaks corresponding to their melting point with onset at 76.80C and 263.20C respectively along with approximately 5.70 % loss in enthalpy (∆Hobserved) in comparison to (∆Hcalculated) values of system, suggesting the possibility of interaction20, 21. 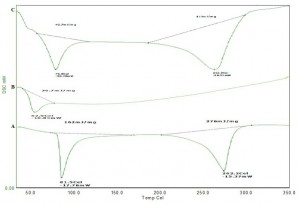 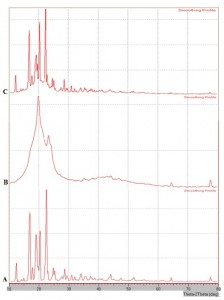 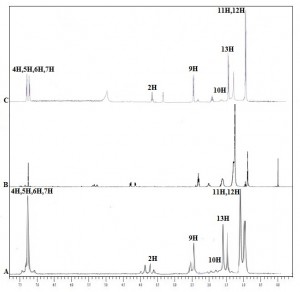 FIG. 7: SCANNING ELECTRON MICROSCOPY AT A MAGNIFICATION OF 100X A) IBUPROFEN, B) GG, C) BINARY MIXTURE OF IBUPROFEN WITH GG (MARKED ARROW SHOWING IBUPROFEN CRYSTALS GET TRAPPED IN CAGE STRUCTURES OF GG)

CONCLUSION: In present investigation, we report the evidence of complex formation of Ibuprofen with Go-Ghrita. The FT-IR spectrum of binary mixtures detected characteristics increase in strong carbonyl band and decrease in (–C=O) linked –OH band. More uniform and sustenance zero order release of 1:1 w/w from in-vitro dissolution study (render its selection for optimization), % loss in enthalpy (∆Hobserved) in comparison to (∆Hcalculated) values of DSC system, suggesting the possibility of interaction. Moreover such complexation phenomenon can be verified by X-RD, NMR and SEM. Retention of respective peaks at their positions in 1:1 w/w binary mixture, revealed crystalline nature of Ibuprofen minimizes the possibility of polymorphic modification in X-RD. Deviation in chemical shift as a slight displacement of proton as well as selective broadening of signals in 1:1 w/w NMR, confirming possible interaction between Ibuprofen and fatty acids present in GG, substantiated by SEM photographs.

SEM further elucidated entrapment of ibuprofen crystal structure in open lattice matrix or cage like crystal structures of GG suggesting inclusion type complex. However, an interesting part is, such sustenance release inclusion complex of Ibuprofen with GG (or other NSAIDs which may form a complex with GG) may be useful in increasing the oral bioavailability or comparing such complex concentration in various biological fluids in experimental animals is under study.