INTRODUCTION: One of the most serious complications of the implant-related surgery is an infection of the bone and soft tissues. Despite the improvement in prophylactic antibiotics, treatment of chronic osteomyelitis related to orthopedic implant-related surgeries is still an important problem.

Postoperative infection of an orthopedic implant may cause destructive results 1-3. MRSA is one of the most common organisms in the orthopedic infections and effective antimicrobial agents against MRSA are limited 4. Although the chemical structure of teicoplanin is similar to vancomycin. these two drugs are different pharmacokinetically and pharmaco-dynamically. Teicoplanin can be administered intramuscularly, and experimental animal studies reported that the concentrations of teicoplanin in bone tissue were higher than vancomycin 5.

Tigecycline is a new, injectable glycycline antibiotic which demonstrated excellent results in-vivo and in-vitro against gram-negative, gram-positive, aerobic and anaerobic organisms including MRSA 6-9.

The study aimed to evaluate the comparative efficacy of tigecycline and teicoplanin in the treatment of implant-related MRSA osteomyelitis in an experimental rat model.

Study Groups: This study was approved by the Local Ethical Committee of Duzce University. Sixty adults. female Wistar Albino rats at the age of 5-7 months, within the weight range of 220-275 grams were used. Norden's modified foreign-body model of experimental osteomyelitis with a Kirschner wire was used to develop MRSA osteomyelitis in these rats 10. Sodium morrhuate was not used as a sclerosing agent.

Totally 12 rats were excluded from the study, 5 of them died from anesthetic complications, and the remaining 7 rats died from other reasons.

Preparation of Animals and Surgery: Kirschner wire (K-wire) with 0.2 ml (1 × 107 colony-forming unit (CFU) /ml) of MRSA species has been replaced to the right tibial metaphysis of all rats. After that, all rats underwent a radiological evaluation with a follow-up 3 weeks. At the end of the follow-up, rats with grade 2-4 osteomyelitis were included in the study. After the study period passed, infection sites at the right tibial proximal metaphysis were removed for the microbiological and pathological evaluation.

MRSA was gathered up from a 43-year-old osteomyelitis patient via identification with Api-Staph (Bio Meriux) test. Antibiotic susceptibility of the organism was detected by E-test. Pure bacterial cultures were isolated on blood agar and standardized (107 CFU/ml) for the experiment.

Experimental Study: The surgical instruments were sterilized in the steam autoclave (Amsco. USA) at 134 ºC one day before the operation. Anesthesia was performed by applying 1.5 mg Xylazin hydrochloride (Rompun®) at the 0 min and 15 mg Ketamine HCL (Ketalar®) at the 3rd minute. Right lower extremities of the rats were shaved with epilation cream (Lapiden®).

Povidine iodine 10% was used as an antiseptic solution. Rats were divided into 6 groups. The proximal anteromedial incision was performed to the right cruris of all rats, and 0.2 cm hole was dug via dental burr in the proximal tibia medial cortex to reach medulla. 0. 2 mL (1 × 107 CFU/ml) MRSA and 5.0 × 1.0 mm K-wire were replaced to the holes at the proximal metaphysis cortex of tibia and focal infection site were developed. The input areas in the cortex were closed with dental gips.

Fascia and subcutaneous tissues were sutured with polyglactin, and prolene was used for the skin closure. The operation site was cleaned with povidine iodine solution. Chronic osteomyelitis was detected radiologically Fig. 1 based on the modified criteria of colleagues by X-ray of the right cruris of the rats preoperatively and 3 weeks postoperatively 11. 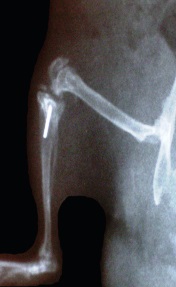 FIG. 1: LATERAL X-RAY OF THE RIGHT TIBIA AT THE POSTOPERATIVE 3rd WEEK: BONE LYSIS IS SEEN AROUND THE K-WIRE

After 4 weeks of antibiotic treatment, all rats were sacrificed with a high dose of ether anesthesia. Right tibias were excised for microbiologic and pathologic examination.

Microbiology: Bone species of each rat which were recruited in aseptic conditions were taken into sterile falcon tubes and coded. Bone tissues were weighted by a sensitive scale (Shimadzu. Libror AEG -120, Japan) and mechanically homogenized, afterward. Species were diluted and layered to triptic soy agar after homogenization. Several bacteria were detected quantitatively (CFU/gr) after 24 h of incubation at 37 ºC.

Pathology: The coded bone samples were fixed in 10% formalin solution. Following decalcification in hydrochloric acid containing EDTA, they were routinely processed and embedded in paraffin. Five micron thick serial sections stained with hematoxylin and eosin were examined by the pathologist who was blinded for study groups.

Evaluated variables were: polymorphonuclear leucocytes. lymphocyte/plasma cells, foreign body type multinucleated giant cells, newly formed capillaries, necrotic bone, Fibrosis, and new bone formation. Each variable was scored semiquantitatively from absent (0) to extensive (3). Scores of the variables were combined to obtain the “necro-inflammatory” score Fig. 2. The scores were assigned by counting high power field areas of necrotic bone, fibrosis, and new bone formation. Scores of the fibrosis and new bone formation were combined to obtain a “repair” score Fig. 3. And the sum of the two scores gave the final score. After the codes were broken, these numerical scores were used to compare the groups by statistical analysis. The results were evaluated by Kruskal Wallis and Mann Whitney tests using NCSS 2007 & PASS Statistical Software (Utah. USA).

All samples had morphological findings of chronic osteomyelitis with fibrosis and new bone formation. Local collection of polymorphonuclear leukocytes and foreign body type multinucleated giant cells were seen around necrotic bone fragments in some cases. We observed statistically significant differences regarding the histo-pathological scores for the following matches; Table 2.

Statistical Analyses for Microbiological Evaluation: SPSS-13 (Statistical Package for Social Science; Chicago. IL. USA) database was used for analysis. Saphiro-Wilk test was used for the detection of normal distribution. Data which were not suitable for normal distribution, were analyzed with the nonparametric test. Independent variables were evaluated with Mann Whitney-U test. Data were shown as ± SD, and P<0.05 was considered as statistically significant.

RESULTS: Medium numbers of microorganisms (median ± SD) that colonized at the osteomyelitis site of the rats were shown in Table 3.

TABLE 3: MEDIUM NUMBERS OF MICROORGANISMS (MEDIAN ± SD) AT THE OSTEOMYELITIS SITE OF THE RATS

TABLE 4: MEDIAN MANN-WHITNEY U AND P VALUES OF TIGECYCLINE AND TEICOPLANIN TREATMENT GROUPS

DISCUSSION: Despite appropriate surgical conditions and prophylactic antibiotic use, infections on the implant surface remain a serious problem 12. Particularly, infections after implant surgery may be catastrophic for both the surgeon and patients. Not only a series of complications such as removal of the implant, bone and soft tissue loss, but even amputations could also be seen, and the cost is very high 13.

Clinical studies revealed that biomaterial existence in the surgery site makes the host vulnerable to infections both at the early and late periods. Similarly, dead bone tissue and traumatic soft tissue are the facilitating factors for infections. Bacterial biofilm layer on the implant material surface is the most important factor for resistance development 3.

Osteomyelitis treatment requires an extended period of systemic antibiotic therapy with high bone concentrations that may result in neurotoxicity, hepatotoxicity, and gastrointestinal side effects. Local antibiotics may be given by various ways such as borate bioactive glass cement 14, poly (L-lactide-co-Ɛ- caprolactone) 15, poly (d,L-lactide-co-glycolide) (PLGA) 16, polymethyl methacrylate bone cement and composites 17-18, monoolein gel 19 and biodegradable systems such as bone grafts 20, microspheres prepared with chitosan and its composites 21-22.

Orthopedic metallic implants facilitate osteomyelitis, which may result in severe complications in orthopedic surgery. Current management of these forms of osteomyelitis involves removal of all foreign materials and also meticulous debridement of the necrotic and infected areas and long-term use of systemic antibiotics. Implant related infections associated with MRSA have a poor prognosis 23. Bacterial adhesion is a predictable result for these infections, and various studies reported particularly Staphylococcus aureus, which is responsible for 71-84% of these infections, have a special secretion that leads to adhesion 24.

The effectiveness of glycopeptides was shown in the treatment of MRSA infections, and thus, they were regarded as the standard gold medication for MRSA infections. The efficacy of the other glycopeptide Teicoplanin in the treatment of bone and soft tissue infections due to MRSA has been demonstrated in several reports 25, 26 though cases caused by glycopeptide-resistant S. aureus (GRSA) were reported in USA 27. Tigecycline is a novel broad-spectrum glycylcycline antibiotic, with a broad-spectrum activity against Gram-positive, Gram-negative, atypical, anaerobic, and resistant bacteria including MRSA 3-5. It has a mechanism that blocks the entry of amino-acyl transfer RNA into the acceptor site by binding to the 30S ribosomal subunit. By this way, tigecycline inhibits protein synthesis and bacterial growth 28.

The most favorable pharmacokinetic parameter of tigecycline is the satisfactory tissue penetration of the drug. There is no need for dose adjustment in case of hepatic or renal failure. Adverse events are mainly limited to the gastrointestinal system and not life-threatening 28. On the other hand, only a few animal trials demonstrated the effectiveness of tigecycline in MRSA osteomyelitis in the literature 29-31.

Another study from Kandemir et al., and Kaya et al., 30, 31 revealed that the number of bacteria in tigecycline receiving rats was lower than the control group. Their result was comparable with the teicoplanin group.

We compared the efficacy of tigecycline and teicoplanin in an experimental model of implant-related MRSA osteomyelitis and found that Tigecycline is effective for the treatment of osteomyelitis and may be an appropriate alternative to teicoplanin. We demonstrated that 7mg/kg tigecycline treatment for 4 weeks has significantly reduced the number of colonized microorganisms when compared with the control group with and without an implant.

There was pathologically no statistical difference between the two antibiotics used in both implanted and nonimplanted groups (Group 2 - Group 3 and Group 4 - Group 5).  Repair score was the only parameter being significantly different when Group 2 and 4 were compared.

Beside these histopathological findings implanted tigecycline group (Group 2) showed lower median colony count compared to implanted teicoplanin group (Group 3) thus indicating a better tissue and biofilm penetration of tigecycline which should be the most important issue of implant-related orthopedic infections.

Beside antimicrobial effectiveness, lower side effects in long term use, biofilm activity, no dosage adjustment in the elderly and in renal and in hepatic failure makes tigecycline a promising agent for the treatment of implant-related MRSA orthopedic infections. Further studies with other dosages and in combination are warranted.

CONCLUSİON: Tigecycline with its good tissue penetration and lower side effects were found to be as effective as teicoplanin in implant-related MRSA osteomyelitis, even if the implant is retained. It could be considered as an alternative to glycopeptides because of the efficacy and because of the lower adverse effects in long term usage. Further studies are warranted to suggest a standard medical treatment for implant-related osteomyelitis.

ACKNOWLEDGEMENT: We thank Duzce University for the support of this work.