Introduction: Solanum nigrum (S. nigrum) has been shown to be hepatoprotective by Ayurvedic physicians but has not been scientifically evaluated so far. So, the present study was undertaken to explore the hepatoprotective activity of S. nigrum against experimentally induced hepatotoxicity in albino rats.

Aim of the study: To explore the hepatoprotective activity of S. nigrum.

Conclusion: It can be concluded from the present study that S. nigrum extract is a potent hepatoprotective agent. It is assumed that this hepatoprotective effect of S. nigrum may be due to several reasons such as antioxidant, free radical scavenger and hepatic regeneration

INTRODUCTION: Liver is one of the largest organs in human body and the chief site for intense metabolism and excretion. So it has a important role in the maintenance, performance and regulation of homeostasis in the body. It is involved in almost all the biochemical pathways related to growth, to fight against diseases, for nutrient supply, energy provision and reproduction 1. Thus, it is crucial to maintain a healthy liver for overall health and well being. But liver is continuously and variedly exposed to environmental toxins and abused by poor drug habits and alcohol, which can eventually lead to various liver disorders, generally presenting as a distinct  patterns of diseases such as hepatocellular, cholestatic (obstructive), or mixed type of liver disorders.

Almost all types of liver injuries may lead to hepatic failure and ultimately death. Thus liver diseases are one of the most fatal diseases in the world today. Till date available modern drugs have not been able to come up with a satisfactory answer for liver disorders 2.

In the absence of reliable liver protective drugs in allopathic system of medicine, many herbs have been claimed to play an important role in the management of various liver disorders. Numerous medicinal plants and their formulations are used for liver disorders in ethnomedical practices and in traditional system of medicine in India. Liv.52 is such a herbal formulation of The Himalaya Drug Company India. It is a mixture of extracts of 7 herbs and is used for the treatment of various liver diseases. A number of research articles have been published in its favor including experimental as well as clinical studies 3.

S. nigrum is a plant which belongs to family solanaceae and has been shown to be hepatoprotective by Ayurvedic physicians. However, the literature reviews indicate that the hepatoprotective activity of S. nigrum has not been scientifically evaluated so far.

Therefore, the present study is intended to explore hepatoprotective activity of an aqueous extract of S. nigrum in experimentally induced hepatotoxicity in albino rats.

Preparation of Plant Extract: The S. nigrum plant was obtained from the local market of Meerut, UP (India) in August 2010. The plants were authenticated by the Botany Department of CCS University, Meerut, UP (India). After collection of the required quantity, it was carefully segregated, washed and dried in shade. The whole dried plants and its fruit were separately powdered mechanically with a herb grinder. The powder of whole plant and fruit were mixed in equal ratio manually The prepared powder was kept in dry, clean, airtight glass jar and stored at 4°C until used. 100 g of the prepared powder was macerated in 500 ml of distilled water for 24 h.

It was then filtered through a 1mm mesh sieve and the filtrate was dried in Petri dishes and concentrated to a dark green residue by heating at 40°C, till complete evaporation of water was achieved.

Animals: Albino rats (Wistar strain) of either sex and weighing 150-200g were obtained from authorized animal house (Jamia Hamdard, Delhi). The animals were housed in cages under controlled conditions of temperature (25°C) and alternating 12 hour cycle of light and darkness. The animals had free access to standard rat pellet diet (Lipton India Ltd.) and tap water ad lib. After one week of acclimatization, the animals were considered suitable for study.

Study were reviewed and approved by the Institutional Animal and Ethics Committee of L.L.R.M. Medical College, Meerut, India, and were in accordance with the guidelines of the Committee for the purpose of Control and Supervision of Experiments on Animals (CPCSEA).

Study Design: These animals were divided into six groups of six animals each.

Group-I: This group was given normal saline 2ml/100g/day per orally in addition to the standard rat pellet diet and tap water.

Group-II: This group was given 1 ml/kg of a 50% v/v solution of Carbon tetrachloride (Nice Chemicals Pvt. Ltd., Cochin) in olive oil intraperitoneally.

Group-III:   This group was given Liv. 52 syrup (2 ml/kg) orally for twenty days followed by CCl4 intraperitoneally as in Group-II. The Liv. 52 was administered by gavage method with animals fasted 3-4 hours prior and 1 hour after administration to ensure proper absorption. CCl4 dose was given concomitantly with the last (20th day) dose of Liv. 52.

Group-IV: This group received the S. nigrum extract in the dose of 2ml/100g/day twice daily orally for the duration of 10 days followed by CCl4 intraperitoneally as in Group-II on the last day.

Group-V: This group was given the S. nigrum extract (2ml/100g/day per orally twice daily) for the duration of 20 days followed by CCl4 intraperitoneally as in Group-II on the last day.

Groups-VI: This group received the S. nigrum extract (2ml/100g/day per orally twice daily) for the duration of 30 days followed by CCl4 intraperitoneally as in Group-II on the last day.

Animals of all the groups were fasted for 24 hours (during this duration water remained freely available) after which they were sacrificed under Ketamine (75 mg/kg) and Diazepam (10 mg/kg) anaesthesia given intraperitoneally 4. Blood was collected from the anaesthetized animals from retro-orbital plexus. After blood collection the animals were sacrificed to obtain liver for histopatholgical examination.

Biological study parameters: The collected blood, after a standing time of half an hour, was centrifuged in Remi R-8 centrifuge at 2500 rpm for 10 min. The serum so obtained was used to estimate the intended biochemical study parameters viz. alanine trans aminase (ALT) based on 2, 4-dinitrophenylhydrazine method 5, alkaline phosphatase (ALP) based on Kind and King’s method 6  and Total bilirubin based on modified Jendrassik and Grof’s method 7.

Histopathology: The liver was excised from the animals and washed with normal saline. A piece of about one cm was cut and fixed in 10% neutral formalin for 12-24 hours. It was then dehydrated and cleared with ethanol and xylene respectively followed by embedding in paraffin wax from which blocks were prepared. Sections of 5µm thickness were prepared from the blocks using a microtome 8. These were processed in alcohol-xylene series and were stained with Harris haematoxylin and eosin stain 9 and subjected to histopathological examination.

Statistical Analysis: Results were expressed as Mean ± Standard deviation (SD). Statistical differences between the groups were tested by one way analysis of variance (ANOVA) followed by Newman-Keuls Multiple Comparisons. P-values were estimated by referring to appropriate tables. 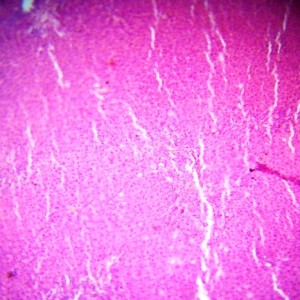 FIGURE 1: MICROSCOPIC FEATURES OF THE LIVER OF NORMAL SALINE TREATED GROUP (GR I) NORMAL HEPATIC LOBULE ARCHITECTURE IS SEEN. HEPATOCYTES AND THEIR NUCLEI ARE WELL VISIBLE

Classical centrizonal necrosis was seen in the CCl4 treated group. The hepatocytes around the central vein were necrosed with no distinguishable nuclei (Fig. 2). 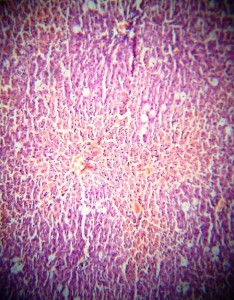 FIGURE 2: MICROSCOPIC FEATURES OF THE LIVER OF ANIMALS TREATED WITH CCL4 (GR II) EXTENSIVE CENTRIZONAL NECROSIS IS SEEN. NO HEPATOCYTES WITH NUCLEI ARE DISCERNIBLE 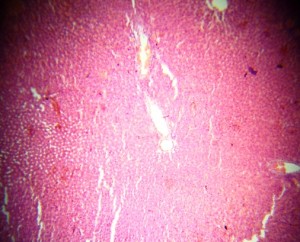 FIGURE 3: MICROSCOPIC FEATURES OF THE LIVER OF ANIMALS TREATED WITH LIV.52. (GR III) MILD HEPATOCYTE SWELLING IS PRESENT AS INDICATED BY CONSTRICTED SINUSOIDS. INFLAMMATORY CELLS ARE SEEN AROUND CENTRAL VEINS. NECROSIS IS ABSENT

The group treated with aqueous extracts of S. nigrum in a dose of 2 ml/100g for 10 daysshowed feathery degeneration in the centrizonal area which was the predominant histological feature of this group (Fig. 4). 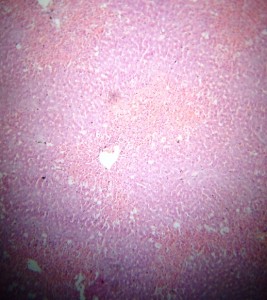 FIGURE 4: MICROSCOPIC FEATURES OF THE LIVER OF ANIMALS TREATED WITH SOLANUM NIGRUM AQUEOUS EXTRACT 2ML/100G/D FOR 10 DAYS (GR IV). FEATHERY DEGENERATION OF HEPATOCYTES IS SEEN AROUND THE CENTRAL VEIN

The primary feature in the groups treated with 2 ml/100g of S. nigrum for 20 days was the presence of fatty changes in the centrizonal area. Necrosis was mild (Fig. 5). 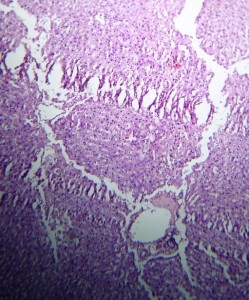 Almost normal hepatic lobule architecture was seen in the group treated with 2 ml/100g of S. nigrum for 30 days. Similar to the Liv.52 treated group, this group showed the presence of constricted sinusoids, pointing  towards mild hepatocyte swelling. No necrosis or inflammation was seen. Congested central vein was seen (Fig. 6). 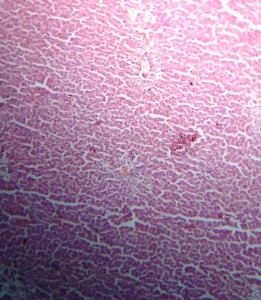 DISCUSSION: Liver damage induced by CCl4 is a commonly used model for the screening of hepatoprotective drugs 10.CCl4 is metabolically activated by the cytochrome P-450 dependent mixed oxidase in the endoplasmic reticulum to form trichloromethyl free radical (CCl3) which combines with cellular lipids and proteins in the presence of oxygen to induce lipid peroxidation 11, 12. These result in changes in structures of the endoplasmic reticulum and membranes of other organelles, loss of metabolic enzyme activation, reduction of protein synthesis and loss of glucose 6 phosphatase activation, leading to liver injury and elevated levels of transaminases, alkaline phosphatase, bilirubin etc. 13, 14, 15.

Serum alanine transaminase, and alkaline phophatase were found to be significantly elevated after CCl4 administration (Table 1) though the rise in bilirubin level was not to the same extent as ALP and ALT 16, 17. This could be explained by the fact that bilirubin reaches peak serum level in the second hour after CCl4 administration and probably declines afterwards 18.

Blood collection in the present study was 24 hours after CCl4 administration and thus, the serum bilirubin levels would have been on the decline (Table 1). Further, histopathology showed severe centrizonal necrosis, hepatocyte necrosis, portal inflammation, inflammatory cell infiltration, and macro and micro- vesicular steatosis (Fig. 2). The preferential affection of zone 3 may be attributed to the enzyme specificity and metabolic heterogenecity of hepatocytes as suggested by Gumucio 19.

It was observed, that Liv. 52 significantly suppressed the rise of ALT and ALP after CCl4 challenge. It also normalized the bilirubin levels (Table 1). This biochemical protection was also reflected in the histology which showed only mild hepatocellular swelling with the presence of some inflammatory cells (Fig. 3).

S. nigrum exhibited dose dependent hepatoprotection, both biochemically and histologically (Table 1, Fig. 4, 5 & 6). It is interesting to note that the S. nigrum extract (2ml/100g) for 30 days provided better results with ALP as compared to Liv. 52. The same dose for same duration gave good protection against an increase in ALT following CCl4 administration, though level of protection was slightly less as compared to Liv. 52. In all, S. nigrum treated groups and Liv. 52 treated group, the bilirubin levels were in normal range.

The possible mechanism for hepatoprotective activity of Liv. 52 has been ascribed to its inhibitory effect on the microsomal enzymes so that generation of free radicals is limited. Liv. 52 is also claimed to act as a free radical scavenger thereby preventing lipid per-oxidation. Another suggested mechanism for hepatoprotective activity of Liv. 52 is its anti-oxidant property, on account of which it may exert an inhibitory effect on lipid peroxidation and a stimulatory effect on hepatic regeneration as well.

The possible mechanism for hepatoprotective activityof aqueous extract of S. nigrum is not clearly known. It is assumed that the effect of S. nigrum extract on liver protection may be due to several reasons. It may be related to glutathione-mediated detoxification. S. nigrum could have enhanced GSH status in cells and thereby afforded protection to hepatic cells from toxic damages.

Some still unexplained mechanisms of S. nigrum may be assumed to be involved in protecting liver from carbon tetrachloride induced toxicity. The hepatoprotective activity of S. nigrum aqueous extract was comparable in the dose of 2 ml/100g/day for 30 days to that with Liv. 52 syrup (2 ml/kg) for 10 days. This fact does not undermine the efficacy of the S. nigrum aqueous extract because; the Liv. 52 is a hydroalcoholic extract. Thereby, a hydroalcoholic extract of S. nigrum can be expected to deliver these results at much smaller doses and for less duration. Further the pharmacokinetic studies of S. nigrum are largely unknown. An elaborate investigation to explore the pharmacokinetic profile may lead to better efficacy and potency of S. nigrum at smaller doses.