Categories Menu
Home » EXPLORING THE DIVERSITY OF ENTEROPATHOGENS IN NEONATES

EXPLORING THE DIVERSITY OF ENTEROPATHOGENS IN NEONATES

EXPLORING THE DIVERSITY OF ENTEROPATHOGENS IN NEONATES

ABSTRACT: Diarrhea alters the movement of ions and water that follows an osmotic gradient and leads to Loose, watery stools, abdominal cramps, abdominal pain, fever, bloating, blood, and mucus in the stool. Numerous critical cases have been observed in both infants and adults. The main objective of this study is based on an exploration of risk factors of diarrheal infection caused in neonates by entering pathogenic Bactria. The enteric infections responsible for diarrhea are the major cause of morbidity and mortality worldwide, while 2–4 billion cases of diarrheal infections in infants occur worldwide every year. The major microbes associated with diarrheal infection belong to all the major groups, including viruses, bacteria and protozoans. Amongst various pathogenic factors, preferred bacterial pathogens have been considered as classical organisms for the study of diarrhea viz the strains of Escherichia coli for ion absorption mechanisms, Clostridium difficile and Shigella spp. as inflammatory diarrhea and Vibrio cholera for secretory diarrhea. The current study is focused on the members of Enterobacteriaceae, including the strain of E. coli O157: H7 (enterohemorrhagic). In the current investigation, 35 fecal samples were collected from hospitals belonging to diverse age groups and various biochemical tests were performed to analyze the pathogen city and property of isolates.

INTRODUCTION: Diarrhea is the second leading cause of morbidity and mortality every year all over the world. Among all ages, particularly prevalent in children under the age of 5 may lead to malnutrition and severe complications 1. Diarrhea is typically a symptom of an infection in the intestinal tract, which can be spread through contaminated food or drinking water or become contagious in nature because of poor hygiene 25.

This pathological condition may lead to severe gastrointestinal complications in children 2. In clinical practice, there are three major types of diarrheas reported. One is acute watery diarrhea, which lasts several hours or days and includes cholera. The second is acute bloody diarrhea, also known as dysentery. The third is persistent diarrhea, which can be continued for more than 14 days 5.

Acute diarrhea of infectious etiological is also referred to as gastroenteritis. Some of these infections may present predominantly and may cause nausea and vomiting. Additional symptoms include abdominal distention, abdominal pain, borborygmus, dehydration, flatulence, halitosis, melena, hematochezia, polydipsia and tenesmus, vomiting, and weight loss 3. Diarrhea has been assessed on global epidemiology periodically since 1982. However, there is a significant difference between developed and developing countries in terms of morbidity and mortality rates in case of diarrhea worldwide 1. In developing countries 24, rotavirus is thought to be responsible for 60% of all diarrheal illnesses.

Collection of Samples: Fecal samples were procured from various hospitals of Meerut and NCR Table 1. The samples immediately after collection were transported to the laboratory at 4 ºC.

TABLE 1: DETAILS OF THE SAMPLES COLLECTED

Spreading on XLD Agar: The isolated colonies were sub-cultured on XLD agar. The plates were observed for the color of colonies as pink, most likely to be E. coli, yellow Shigella spp., and blackish Salmonella spp., after an incubation of 24h at 37°C. The selected colonies were subsequently transferred on nutrient agar at 4°C and as glycerol stock at -20°C till further characterization24.

Gram’s Staining: Thin smears were prepared on clean glass slides and heat-fixed. The smears were flooded with crystal violet for 1 min and rinsed with water. A few drops of mordant (Gram's iodine solution) were added to the smear and left for 1 min. After rinsing with water, the decolorizer (70% ethanol) was added drop-wise for 10-15 sec.

The smear was then counter-stained with safranin for 30 sec, rinsed with water, air-dried, and observed under the microscope in oil immersion 25.

Biochemical Characterization of Isolates: The isolates were further characterized based on their biochemical properties. Classical biochemical tests were performed, including Indole, Methyl red, Voges-Proskauer and Citrate utilization tests, catalase test, and production of H2S on motility on TSI agar for their identification.

Indole Production or Tryptophanase: Indole is one of the metabolic degradation products of the amino acid tryptophan. Tryptophan broth was inoculated with test organisms and incubated at 37°C, for 24 h.

At the end of incubation, 15 drops of Kovac's reagent were added to each tube. The formation of the cherry red-colored ring at the interface of broth and reagent within seconds indicated indole production 23.

Three mL of NaOH (40%) and 2-3 drops of creatine solution (0.3% w/v) were added to the culture broth. The development of cherry red color after 30-60 min at room temperature was recorded as positive.

Catalase Test: A loop full of bacterial culture was taken on the glass slide, flooded with 10% H2O2, and observed for the formation of effervescence. 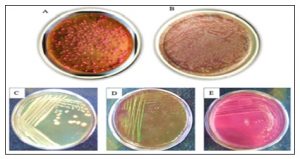 The high amount of coliform was according to the expectation and similar to the other finding11.Microscopic analysis of pure culture smear using Gram's staining under oil immersion objective various shapes with gram reaction was observed. Among 121 isolates selected based on the colony, morphology was revealed 6.6% of isolates were found to be positive cocci while 2.4% were positive rods, while 95% were given Gram's negative reaction 28. Details of isolates are shown in Table 3. The result indicates that some Gram reaction positive cultures were also able to grow on MacConkey's agar, although their ratio was very small, which was 6.6% for Gram reaction positive cocci and only 2.4% were Gram reaction positive rods 12. In this study, out of 144 specimens, enter pathogens were found in 89 (61.8%) while 55 (38.2%) cases yielded negative results. Out of 89 enter pathogens, 48 (53.9%) were bacterial; the result was different from the current investigation. Approximately 500 stool samples were studied15; the stool samples were collected from Diarrhea patients, including infants and children under ten years of age admitted to the Pediatric and Maternity Hospital in Erbil City. Surprisingly, they found infectious agents in 75 (15%) samples, which contradicts the present study's result. In the study reported by Nair et al. 16 in Kolkata, India, where 27.9% of the Diarrhea patients had no potential pathogen, which was also different from the results presented in the current study 27, 32. The classical biochemical test series, commonly known as IMViC were used to further characterize isolates. Details of the results are shown in Table 3 and Fig. 3. For further study, the isolates giving a clear test for Klebsiella sp., E. coli, Citrobacter freundii and Proteus Vulgaris were selected. Among 110 isolates characterized biochemically, approximately 16% were indicative to be E. coli; 3.6% Klebsiella sp., 9% Citrobacter freundii, and 2.7% Proteus Vulgaris 14, 31.In one similar study on patients suffering from Diarrhea, the most commonly isolated pathogens were Aeromonas spp. (33, 16.3%), NLF E.coli (19, 9.4%), Proteus mirabilis (14, 6.9%), Other Salmonella spp. (6, 3.0%), Edwardsiella spp. (4, 2.0%), Shigella spp. (2, 1.0%), Proteus vulgaris (2, 0.7%), Salmonella Typhi (1, 0.5%), Salmonella Paratyphi (1, 0.5%), Citrobacter spp. (1, 0.5%), Plesiomonas shigelloides (1, 0.5%) 17.

Taneja et al. 17 in another study conducted in PGIMER, Chandigarh from January 2000 to September 2002 in which 1802 fecal samples were analyzed from the same number of patients suffering from diarrhea submitted to the Department of Medical Microbiology, in which they reported Aeromonas spp. (14), Salmonellatyphi (2) and Salmonella paratyphi (2). In the study carried out by Sherchand et al.18; the higher incidence of Shigella spp. (36.8%) and Salmonella spp (14.03%). Similarly, in a study carried out by Okon et al. 13, 30 Salmonella spp. accounts for 1 (0.4%). In another study carried out by Kumar et al. 19 Shigella (7.5%), Salmonella (7.5%), Proteus (5.5%), were isolated, which was a bit comparable with the current study.

The variation in the number and type of isolates in different studies might be due to the variation in place, time and season pattern of feeding and socio-economic status of the patients from which the sample was collected 20.

Characterization of Isolates: When examining thin smears of pure culture under the microscope in oil immersion with Gram's staining, the different shapes and colorations of bacteria were detected. (a) gram's negative rod with capsules (b) mucoid creamish yellow klebsiella sp. (c) gram's negative rods (d) colony of E. Coli. The 6.6% isolates were found to be positive cocci while 2.4% were positive rods, on the other hand, 95% were given Gram's negative reaction 21. Details of isolates are shown in Table 3 and Fig. 2. 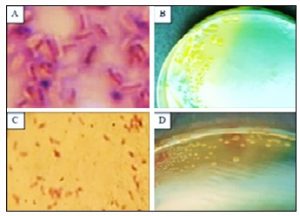 Approximately 16% were indicative of being E. coli; 3.6% Klebsiella sp., 9% Citrobacter freundii, and 2.7% Proteus vulgaris. The isolates were subjected to further characterization.

CONCLUSION: Diarrhea is the world's second-highest cause of morbidity and mortality in infants as well as in adults. It affects people of all ages but is more common in children under the age of five, and it can lead to malnutrition and other various life-threatening problems. The current research focuses on Enterobacteriaceae members, especially the E. coli (Enterohemorrhagic). In this study, 35 fecal samples from hospitals of various ages were obtained, and various biochemical tests were done to determine the pathogenicity and properties of isolates. Finding of this study, the stool samples were collected from Diarrhea patients, including infants and children under ten years of age, admitted to the Pediatric and Maternity Hospital in NCR. Results show a high prevalence of coliform in processed samples.