ABSTRACT: This study was designed to determine the extent of photolytic degradation of diazepam tablets, without light-protective packaging, available in the market. The UV spectroscopy method was designed and applied for this purpose. A total of 2160 tablets (each tablet contained 5 mg diazepam) of three different brand formulations A, B and C were chosen randomly. These tablets were then exposed to different indirect and direct lighting conditions i.e. normal room light condition (for 60 days), direct sunlight exposure (6 hours per day for 3 days), 25 Watt incandescent light bulb exposure and 40 Watt incandescent light bulb exposure (6 hours per day for 3 days). Samples from these light exposures were analyzed for potency determination using UV spectrophotometer and compared against the tablets kept in dark place (Control). Tablets of all three formulations showed marked degradation. The overall average degradations were 23.64%±5.53%; 28.36%±4.87%; 19.72%±4.83% and 25.40%±4.17% respectively for normal room light, direct sunlight, 25 Watt and 40 Watt incandescent bulbs whereas tablets kept in dark place showed little or no decrease in potency (0.01%±.01%). These results suggest that the diazepam tablets should be marketed in light-protected opaque packaging to retain their potency and optimum therapeutic effect. At the same time, the existing transparent packaging should also be replaced with the opaque ones by the manufacturers.

Introduction: With the advancement of modern civilization, complexity of human nature has also been increased. Complicated emotional states are being more and more common among people. Anxiety is one of those complex psychological conditions. Anxiety, according to American Psychological Association (APA) 1, is an emotion characterized by feelings of tension, worried thoughts and physical changes like increased blood pressure.

Other symptoms include restlessness, irritability, muscle tension, excessive tension about the worst outcome of any situation, increased urination rate and so on 2. Anxiolytic drugs, commonly known as sedatives are the class of drugs which can reduce the symptoms associated with anxiety and induce calmness in an individual, generally working on the central nervous system 3. There are many drugs, which are used therapeutically as anxiolytic drugs. Among them benzodiazepines is a class of wide recognition and are being used for a long time in the medical field.

Diazepam is an anxiolytic drug of benzodiazepine group which was the first member of this class. It has a very low polarity hence it is rapidly absorbed after oral administration. Diazepam has the similar mechanism of action like all other benzodiazepines. Gamma amino butyric acid (GABA) influences the excitement of the brain by the binding to the GABA receptor. Upon binding it accelerates the chloride influx into the cell to cause hyper-polarization. This hyper-polarization reduces excitation of the CNS. Diazepam increases the GABAa receptor activity in the brain. They bind to the GABAg receptors to produce positive allosteric change of the GABAa receptors. This positive change increases the activity of those receptors as well as the influx of chloride ions. Thus, diazepam decreases the excitation of the CNS as well as anxiety 4, 5, 6. Photolytic degradation refers to the breakdown or alteration of chemical structure due to the influence of light radiation. In other words, photolysis means the reduction in potency of any compound in presence of light. The rate of photolytic degradation depends on the intensity of the incident light as well as the extent of light absorbed by the compound7. Photolytic degradation may be oxidative or non-oxidative. Non-oxidative photolysis accelerates isomerization, dimerization, cyclization, rearrangement etc. On the other hand, oxidative photolysis produces oxides or peroxides 8. The wavelength range of 300-800nm is the most agreeable range for photolysis 9, 10.   Diazepam is available in pharmaceutical market in a number of dosage forms including oral tablet, oral capsules, oral concentrated solutions, IV suspension, rectal kit etc 11. However, tablet dosage form is most common for the administration of diazepam. Diazepam has been reported to have photosensitivity, and this photo-degradation is more obvious in aquatic environment 12, 13.  However, many of the tablets marketed in Bangladesh are uncoated as well as are packaged in transparent normal blister packaging. Since, they are neither packaged in an opaque packaging nor coated to prevent light access, there is an obvious possibility of degradation of diazepam by light. The aim of the present study was to evaluate the extent of potency reduction of diazepam tablets which are not light protected by packaging or tablet coating. Three different formulations were chosen to unearth the degradation extent.Materials and Methods:

A total of 9 concentrations (0.001-0.009 mg/ml) of diazepam were prepared using the 0.1N H2SO4 solution and the absorbances were measured at the λmax 240.1 nm. Then plotting these absorbances against their respective concentrations yielded a Standard Curve with the following equation:

Where, Y = Absorbance (Abs) X = Concentration of the drug (mg/ml)

This equation was used to determine the drug formulation potencies in this study. The tablets were exposed to the following lighting conditions keeping inside their blister packs.

From Formulation A, 50 tablets were exposed to direct sunlight in a hot summer day in April, 2015 on the roof of East west University Campus, Aftabnagar, Dhaka, Bangladesh. 20 tablets were kept in dark as Control. Initially 10 tablets (5 Controls + 5 samples before light exposure) were analyzed. After that every 2 hour intervals 20 tablets were taken for UV analysis up to 6 hours. In every interval, these 20 tablets included 5 tablets from Controls and 15 tablets from Samples (Sample 1A, 2A and 3A) exposed to light.  Each of these 1A, 2A and 3A samples consisted of 5 tablets.

Analytical Procedure: For Controls and Samples, each analytical reading involved 5 tablets. These were crushed in a mortar. Then the weight equivalent to the average weight of a single respective formulation tablet was taken. This weighed crushed tablet powder was then diluted 1000 times into 0.1N sulfuric acid solution for the UV analysis of potency. The absorbances found were used in the Standard Curve Equation to calculate the potencies.

All the results from this study are shown in the tables and figures as follows:

Table 1: Extent of Photolytic Degradation of Formulation A, B and C under Normal Room-light

Table 2: Extent of Photolytic Degradation of Formulation A, B and C under Direct Sunlight

Table 3: Extent of Photolytic Degradation of Formulation A, B and C under 25 Watt Incandescent Light

Table 4: Extent of Photolytic Degradation of Formulation A, B and C under 40 Watt Incandescent Light

Table 5: Extent of Photolytic Degradation of Formulation A, B and C Controls 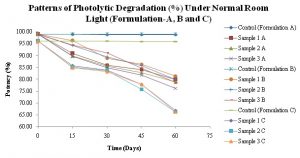 Fig. 1: Pattern of Photo-degradation of All Formulations under Normal Room Light Conditions 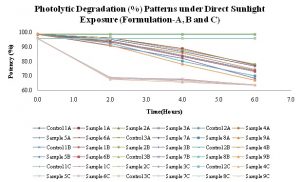 Fig. 2: Pattern of Photo-degradation of All Formulations under Direct Sunlight 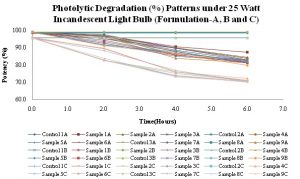 Fig. 3: Pattern of Photo-degradation of All Formulations under 25 Watt Incandescent Light 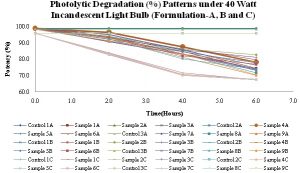 Fig. 4: Pattern of Photo-degradation of All Formulations under 40 Watt Incandescent Light

Our research program was aimed to evaluate the extent of photolytic degradation of randomly selected three formulations of diazepam, which were not available in opaque packaging. As mentioned before, all the formulations were exposed to four different lighting conditions (Normal room light, direct sunlight, 25 watt bulb and 40 watt bulb). All of the formulations experienced gradual decrease in potency (Fig. 1,2,3 and 4), although the extent of reduction in potency was different for various lighting conditions as well as for three different formulations. Unexposed tablets which were labeled as ‘Controls’ experienced no detectable reduction in potency and displayed consistent potency level within the time frame of our research. i.e. 0.01% potency decrease with the standard deviation of 0.01% (Table 5).

Under normal room light condition (Table 1 and Fig. 1), all the formulation showed decrease in potency. The mean potency decrease was 23.64% with a standard deviation of 5.53% for all the formulations. However, Formulation C displayed the greatest extent in potency reduction (30.78%±0.38%). On the other hand, Formulation B displayed least potency diminution (19.26%± 1.43%). This can be attributed to their formulation variables including the quality of API and excipients as well as their manufacturing parameters like moisture content, degree of mixing etc14, 15, 16. Presence of any excipient that can accelerate free radical reaction can also be the cause of photo-degradation resulting greater potency reduction17, 18. The purity of active pharmaceutical ingredient (API) can also contribute to different patterns of potency reduction in different formulations 19. Rare, but not unusual, potency can also be dependent on the thickness and polymer quality of blister packaging because the photolytic degradation directly depends on the intensity of the radiation7.

Direct sunlight exposure (Table 2, Fig. 2) to all the formulations taken for the research program was carried out in summer season in Dhaka, Bangladesh. The minimum average temperature as well as the maximum temperature for three experiment days were recorded 25.6°C and 30.2°C respectively. Under direct sunlight, there was a greater intensity of the incident light because direct sunlight is a great source of full spectrum exposure. All the formulations displayed gradual decrease in potency upon six hours of undisturbed exposure (Fig. 2). The average of all the potency decrease was 28.36% with a standard deviation of 4.87%. Among all the lighting conditions, direct sunlight gave the highest potency reduction in all of the formulations (Table 1,2,3,4).

The greatest reduction was provided by the formulation C (33.44%±0.22%). Most of the samples of Formulation C displayed somewhat consistent reduction in their potency (very low standard. deviation). This can be attributed to their content uniformity and uniform mixing of the formulation ingredients. On the other hand, rest two formulations displayed different potency reduction in different samples (greater standard deviation). This can be due to the difference in content of the API. Other reasons may include formulation variables, processing variables, moisture content as well as the thickness and quality of the packaging.

Acknowledgements: The whole research program was supported by the Department of Pharmacy, East West University, Bangladesh.

Conflict of INterest: No