ABSTRACT: Lipases occupy a prominent place amongst biocatalysts as they can hydrolyze fats into fatty acids and glycerol at the water-lipid interface. Lipase production is a prime area of interest for microbiologists, process engineers, and biochemists. Recent advances in green energy have led to renewed interest in the ability of microbial lipases to catalyze trans-esterification reaction for biodiesel production. Research carried out in this field has revealed that microbes, especially fungi and bacteria, are the tools of choices for commercial production. The primary objective of the study was to isolate lipase-producing microbes from the waste product of oil-contaminated soil sample and to assess their ability to grow in different oil medium. Samples were collected from oil-contaminated garages in Hubli-Dharwad region, Dharwad, Karnataka. Lipid-degrading microbes were trapped in a specialized medium containing various types of oils. All isolated strains were morphologically, physiologically and biochemically characterized. Strain S4-4 was found to be the most efficient strain as it showed the highest lipase activity (25 μmoles/ml/min) after 24 h of incubation at 37 °C amongst the strains. This isolate is identified as Bacillus subtilis by 16S rRNA sequence analysis.

INTRODUCTION: Microbial life is present not only in familiar world like in the air, soil, and lakes but also in geothermal oil field 1. Petroleum reservoirs are sites concerning their physicochemical characteristics (halophilic and thermophilic). They are ecological niches from which taxonomically, physiologically, and phylogenetically unusual microbes can be isolated 2. These are main source for a biotechnological and industrial process. They host a variety of products namely extracellular enzymes, bio-pesticides, bio-surfactants, biopolymers and other renewable resources which are eco-friendly 3.

Over billions of years, prokaryotic microbes developed a wealth of physiologies and molecular adaptations that enabled their survival in virtually every environmental niche, some so extreme and inhospitable that no other life forms could coexist 4. In the course of evolution, microorganisms faced extreme environmental challenges and adapted their metabolic pathways to survive in diverse environments 5.

The literature indicates that these microorganisms are considered as an important source of enzymes with unconventional biochemical and molecular characteristics and unique metabolic capabilities are the major points of attractions in biotechnological applications 6, 7. Lipases catalyze the hydrolysis of the ester bonds in the molecules of triglycerides liberating free fatty acids and glycerol under physiological conditions. Lipases are important in enzyme technology due to their ability to catalyze the trans-esterification reaction which can accept a wide range of acyl groups as their substrates. Lipases also exhibit a high tolerance to various environmental factors such as pH, temperature and organic solvents. Lipases have the potential to meet several needs for wide range applications since they are the only enzymes that catalyze the synthesis of esters 8. Microbial lipase has its use in industrial applications in the processing of fats, oils, detergents, degreasing formulations, food processing, synthesis of fine chemicals, pharmaceuticals, paper manufacture, production of cosmetics and pharmaceuticals. Mycobacterium sp. is capable of producing lipase was isolated from the pulp and paper industry 9.

Isolation and Enrichment of Lipolytic Bacteria: Lipolytic bacteria were screened by enrichment culture technique from 5 different samples. These samples were enriched by inoculating in tributyrin broth medium flask (50 ml) containing 0.5% (w/v) peptone, 0.3% (w/v) yeast extract, 1% (v/v) tributyrin pH 7.0 and incubated at 37 °C for 48 h. After incubation, a loopful of growth obtained from each enriched culture sample was isolated on tributyrin agar medium (pH 7) plates 10, 11 by sector plate method and incubated at 37 ºC for 48 h.

Screening Lipase of the Isolates for Activity and Maintenance of Pure Culture: Lipolytic organisms were screened by qualitative plate assay. The lipolytic activity of isolated colonies was observed by spot inoculation on tributyrin agar medium plates and incubated at 37 ºC for 48 h (pH- 7), and zone of clearance was observed due to hydrolysis of tributyrin by lipase. The organisms producing a maximum zone of hydrolysis around the colony were selected for further study. Pure cultures of the isolate were maintained on minimal medium agar slants containing 0.5% (w/v) peptone, 0.3% (w/v) yeast extract, 0.5% (w/v) NaCl, 2.0% (w/v) agar pH 7.0 at -80 ºC and were sub-cultured every week.

Titrimetric Lipase Assay Method: Lipase activity was measured by titrimetric method 13, 14. The reaction cocktail was prepared by 1.7 µl of 50 mM tris buffer (pH 8), 100µl of 10% tween, 1M CaCl2 of 100 µl and 100 µl of crude enzyme. Incubate the mixture for 1hour at 40 ºC and measure the turbidity using spectrophotometer at 400 nm.

Characterization of the Isolates: The isolate showing maximum zone of clearance at this moment referred to as S4-4 is selected for further analysis. The strains were identified based on morphological and biochemical characteristics according to the procedures described in Bergey’s Manual of Systematic Bacteriology 12, and then they were further confirmed by 16S rRNA gene sequencing method. Homology was analyzed in GenBank with the BLAST program.

Isolation and Screening of Lipase Producing Bacteria: A total of 72 distinct morphological bacterial strains were isolated from oil-contaminated soil in Karnataka. The isolated strains were screened for extracellular lipase using tributyrin agar media.

Out of these 59 isolates were found to be lipolytic bacteria. One of the isolates produced a larger clear zone than the others, indicating higher lipase activity. The results confirmed that the strain was potent to produce lipase and also indicate that lipolytic bacteria are widespread in oil-contaminated environments. Tributyrin, a triglyceride is a natural component present in butter and is known as liquid fat 24. The selected strain (S4-4) was then identified based on morphological Table 1, biochemical Table 2 and molecular characterizations. The results showed that strain is gram-positive, aerobic and rod shape. A biochemical test was conducted using an API identification kit. The strain is catalase positive. Taken together, these characteristics indicated that strainS4-4 belong to the genus Bacillus. Molecular techniques employing amplification of target DNA provide alternative methods for diagnosis and identification 15, 16 identified Bacillus megaterium 37-1, Bacillus safensis 1-1, Bacillus pumilus KN-Lip2, Bacillus subtilis KN-Lip3, and Lysinibacillus fusiformis KN-Lip4 using 16S rDNAs sequencing.

Titrimetric Lipase Assay Method: Strain S4-4 was found to be the most efficient strain as it showed highest lipase activity (25 μM/ml/min) after 24 h of incubation at 37 °C amongst the strains 22, 23. Various studies determined qualitative lipolytic activity in isolated bacteria on tributyrin agar plates 17, 18.

Sequencing and Phylogenetic Analysis: The identities of the bacteria was further confirmed by 16S rRNA sequencing. Approximately 1399 bp sequences were obtained from S4-4 and then aligned with other 16S rRNA sequences available in the GenBank database. A phylogenetic tree was then constructed using the Neighbor-Joining method. The phylogenetic analysis indicated that the sequences of strain S4-4 are highly homologous (99%) with the sequence of Bacillus subtilis (NCBI accession no. SUB3191429 Seq4 MH114029). S4-4 was renamed as Bacillus subtilis KUBT4. The 16S rRNA sequences of strain S4-4 was deposited in GenBank under accession number SUB3191429 Seq4 MH114029. Based on these results, S4-4 is Bacillus sp. This sequence showed 99% similarity with Bacillus subtilis strain NMK17 16S ribosomal RNA gene, partial sequence and also with Bacillus sp. (in Bacteria) strain Z76 16S ribosomal RNA gene, partial sequence 24-34. 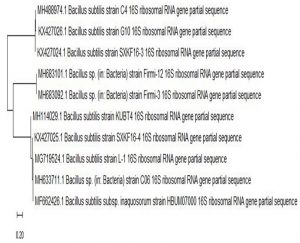 The Neighbour-Joining method was used to infer evolutionary history 19. The optimal tree with the sum of branch length of 0.00796911 was drawn to scale with branch lengths in the same units as those of the evolutionary distances used to infer the phylogenetic tree. The evolutionary distances were calculated using the maximum composite likelihood method 20 in the units of the number of base substitutions per site. Ten nucleotide sequences were used for analysis. Codon positions were comprised of 1st, 2nd, 3rd and non-coding. All positions with gaps and missing data were excluded. There were a total of 1389 positions in the final dataset. Evolutionary analyses were conducted in MEGA7. 21

CONCLUSION: The present study focused on the selective isolation of the potential L-lipase producing bacteria. The isolates potent in lipase production were evaluated. Based on the enzyme activity the potent isolate was selected, and further biochemical and molecular identification was carried out to identify the microorganism.

The isolate was found to be Bacillus subtilis (Gene Bank Accession Number SUB3191429). This strain isolated from the oil-contaminated soil has the potential for lipase synthesis and suggests that this can be used as a potential source of the enzyme. Further studies on the media optimization for the large scale production of the enzyme from this strain are necessary.

ACKNOWLEDGEMENT: Authors are thankful to University Grant Commission for providing the fellowship grant under the scheme of Maulana Azad National Fellowship for 2016-17 and authors also sincerely acknowledge, PG Department of Studies in Biotechnology and Microbiology, Karnataka University, Dharwad.

CONFLICT OF INTEREST: The authors hereby declare no conflict of interest.