ABSTRACT: India having a large stretch of marine coastline is advantageous as a natural resource for marine aquaculture. But the waste produce from the marine processing industries fetch a greater environmental risk as there is accumulation of wastes in huge quantity. These wastes are a larger source of natural carotenoids that have a huge pharmaceutical potentials. So proper initiatives must be taken to recycle the waste into a product. Natural astaxanthin from crustacean shell waste is a better alternative to the synthetic orange-red pigment. In this present investigation astaxanthin was extracted from crustacean shell waste, by using organic solvents of different polarities (Hexane, methanol, ethanol, petroleum ether, chloroform and acetone). Characterization of the astaxanthin pigment were performed by TLC buy comparing the Retardation factor (Rf) as indicated in  Lorenz Todd standard chromatogram where three bands of Astaxanthin (Rf=0.36), Astaxanthin monoester(Rf=0.60) and Astaxanthin diester (Rf=0.75) were detected. The extraction yield of the natural carotenoid from shrimp waste was compared amongst all solvents spectrophotometrically at 470 nm and quantified using equation of Kelley and Harmon. Astaxanthin yield obtained from acetone extract was highest with 48.64µg/g compared to other solvent extracts. These extract were then subjected to the microbiological assay by against gram positive and gram negative bacteria, where the methanolic extract gave highest zone of inhibition as compared to the extracts with other organic solvents.

INTRODUCTION: Astaxanthin is a carotenoid that belongs to class of phytochemicals known as tetraterpenoids, which are built from eight isoprenes,C5H8 molecules; isopentenyl diphosphate (or IPP) and dimethylallyl diphosphate (or DMAPP) as the initial precursor. Like many carotenoids, astaxanthin is a colorful, lipid-soluble pigment. The colour is due to the extended chain of conjugated (alternating double and single) double bonds at the centre of the compound.

This chain of conjugated double bonds is also responsible for the antioxidant properties of astaxanthin (as well as other carotenoids) as it results in a region of decentralized electrons that can be donated to reduce a reactive oxidizing molecule.1, 2

Astaxanthin is found in microalgae, yeast, salmon, trout, krill, shrimp, crayfish, crustaceans, and the feathers of some birds. The red color of salmon meat and cooked shellfish is due to this pigment. Professor Basil Weedon's group was the first to prove the structure of astaxanthin by synthesis, in 1975 3. Astaxanthin, unlike some other carotenoids, is not converted to vitamin A (retinol) in the human body 4. Too much vitamin A is toxic for a human, animal, but astaxanthin has lower toxicity. It is an antioxidant with slightly lower antioxidant activity than other carotenoids 5.

The recovery of these valuable components from the waste would not only improve the economy for crustacean processors, but also would minimize the pollution potential of the Crustacean waste. Crustacean waste could be the cheapest raw materials for carotenoid recovery, and later could be a better and cheaper alternative to synthetic carotenoid in aquaculture feed formulations and in surimi based products. The U.S. Food and Drug Administration (FDA) has approved astaxanthin as a food coloring (or color additive) for specific uses in animal and fish foods 6. The European Commission considers it food dye and it is given the E number E161j 7. Natural astaxanthin is considered generally recognized as safe (GRAS) by the FDA 8, 9.

The crustacean waste was collected from shrimp processing centre, East Godavari region of Andhra Pradesh, and transported to laboratory under iced condition. Samples were washed under running water and dried at 50°C in oven for 24 hours. They were packed in polyethylene bags and stored at -20°C until use. Dry samples were thawed in running water before use and homogenized in a laboratory mixer prior to extraction of astaxanthin and estimation in the shell.

Extraction of astaxanthin from crustacean shell waste was investigated by using different organic solvents such as Methanol, Ethanol, Petroleum ether, Chloroform, Hexane, and Acetone. 10 g of homogenized dry crustacean shell waste were extracted with 100ml of each solvent by stirring it for 1 hour on magnetic stirrer. Then the carotenoid extract were filtered by using Whatman No.42 filter paper. Recovered crustacean waste were repeatedly extracted with fresh solvent until the filtrate were colourless.

Astaxathin was analysed by Thin layer chromatography, for this experiment 20 microliter of each extracts were spotted on the silica gel G plate along with standard astaxanthin. Spot development was done by using two different types of mobile phase such as; acetone : hexane (1:3) and methanol:chloroform (benzene : ethyl acetate (1:1)). The separated bands were identified using standard astaxanthin and internationally accepted Rf values for astaxanthin monoester and astaxanthin diester by Lorenz Todd, 1998 12.

The antibacterial activity of the astaxanthin extracts was determined in accordance with agar-well diffusion method described by Rious et al. (1988) 10. The bacterial isolates were first grown in a Beef Extract Peptone broth for 18 hours before use and standardized to 0.5 McFarland standards (106cfu/ml).

Two hundred microliter of standardized cell suspensions were spread on a Mueller-Hinton agar. Wells were then bored into the agar using a sterile 6mm diameter cork borer. Approximately 100μl of carotenoid extracts were introduced into the wells, allowed to stand at room temperature for about 2 hours and then incubated at 37°C. Controls were setup in parallel using the solvents that were extracted. The plates were observed for zone of inhibition after 24 hours.

The organic solvent extracted astaxanthin was quantified by measuring absorbance at 470 nm and using the equation of Kelley and Harmon 11.

Where AST is astaxanthin concentration in µg/g; A is absorbance; D is volume of extract in hexane; 106 is dilution multiple; G is weight of sample in g; d is cuvette width (1cm); E is extinction co-efficient, 2100.

Extraction of astaxanthin esters from the crustacean shell wastes were done with different organic solvents. The solvent extracted carotenoid was in the form of an orange-red coloured solution.

Investigations on the phytochemical screening of the present six different organic extract of crustacean shell waste were revealed the presence of protein, fats and terpenoids in all the extracts (Table 1). Carotenoids are the compounds belongs to major group of terpenoids.

Identification of different carotenoids by TLC:

Purification and identification of this pigment were investigated by TLC. Results of TLC indicated that the Hexane extract and acetone extract highest number of carotenoid fractions were obtained followed by the mobile phase hexane: acetone (3:1) (Table 2) as compared to other organic solvent extracts followed by mobile phase benzene: ethyl acetate (1:1). 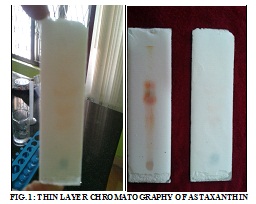 Antimicrobial activity was studied by agar well diffusion method. All six extracts were tested against both gram positive and gram negative bacteria. Highest zone of inhibition were obtained from methanolic extract against all the microbes as compared to other extracts (Table 4).

All six extracts of the crustacean shell extracts were shown varying extraction yield of carotenoids by using equation of Kelley and Harmon. The highest carotenoid yield of 48.64µg/g was obtained from acetonic extracts, when compared to hexane, methanol, ethanol, petroleum ether and chloroform whose yield were 36.28µg/g, 30.47µg/g, 28.62µg/g, 11.9µg/g and 2.14µg/g respectively.

Table 5. Sachindra et al. 14, 15 reported that a 50:50 mixture of isopropyl alcohol and hexane gave the highest yield (43.91μg/g wet waste) of carotenoid compared to acetone (40.60μg/g wet waste). According to Sachindra and Mahendrakar 15 extraction of carotenoids from shrimp waste (Penaeus indicus) with vegetable oils and concluded that sunflower oil was the best oil for extraction, where the extraction yield was 26.3µg/g. Vimla and Paul 16 have reported that maximum yield of carotenoids from Penaeus monodon waste was obtained with acetone, compared to other solvents used for extraction. Polar solvents are generally a good extraction media for xanthophylls whereas non polar solvents are not recommended as their penetration through the hydrophobic mass that surrounds the pigment is limited.

Several reports are available on the yield of astaxanthin from different species of deep sea shrimps. Of these, highest yield of 14.8mg/100 g dry waste was reported by Shahidi and Synowiecki 17 from the waste of P. borealis shrimp. In the present study we obtained a yield of 48.64μg/g crustacean shell waste (Table 5) thus reveals that, of the different species of deep sea shrimps Aristeus alcocki shell waste is an excellent source of astaxanthin.

In this study, the astaxanthin extracted from crustacean shell waste powder 48.64µg/g was calculated. A. Khanafari et al., (2007) 18 reported that the carotenoid in the shrimp powder, was 23.123 mg/g. The carotenoid content in blue crab, Callinectes sapidus, was 4.63 mg/g according to Hinostroza GN at al, 2002 19.

CONCLUSION: Crustacean shell wastes from industries can be utilized for the isolation of important bioactive compounds like natural carotenoid such as astaxanthin. From this above study acetone will be a good extraction media for astaxanthin among organic solvents. TLC separation confirmed that carotenoid extract from crustacean waste contained astaxanthin, astaxanthin mono and diester. Potent antimicrobial activity of crustacean waste extract may find application in pharmaceutical industries for treatment or prevention of pathogenic microbial infections.

ACKNOWLEDGEMENTS: The author express thanks to Dr. Sunakar Keten Nayak of niTza Biologicals, Hyderabad for their help and support in carrying out this research work.