ABSTRACT: The objective of the present investigation is to extract and characterize the active constituent, Gymnemagenin in Gymnema sylvestre leaves using various Chemical and Analytical techniques. Extraction of Gymnema sylvestre leaves powder is done by Continuous soxhlet extraction with 80% ethanol. Identification was done by various chemical tests and TLC. Characterization and quantification by HPLC method, which is quick, reliable and sensitive. LC system Shimadzu with isocratic pumps LC 20-AT, and U.V Detector SPD 20-A was used. Reverse Phase Column C18 (250mm x 4.6mm, 5A° particle size) and a mobile phase consisting of 100 mM ammonium acetate buffer: acetonitrile (75: 25, v/v) were employed. Chemical tests and TLC revealed the presence of Gymnemic acid and its aglycone Gymnemagenin. TLC profile revealed Rf value of 0.41 for Gymnemagenin in the extract and a retention time of 7.366 minutes in HPLC method with a concentration of 3.62 µg/ml in the extract. Various validation Parameters were developed from the HPLC method for identification and quantification of gymnemagenin.

INTRODUCTION: Gymnema sylvestre R.Br. (Asclepiadaceae) commonly known as Gurmar is a herb native to the tropical forests of southern and central India and Sri Lanka.  Gymnema sylvestre leaves are known for several medicinal uses such as antidiabetic, hypolipidemic, stomachic, diuretic, refrigerant, astringent and tonic 9, 10. The major bioactive constituents of G. sylvestre are a group of triterpenoid glycosides known as gymnemic acids with gymnemagenin as common aglycone. Purified gymnemic acids have been reported as antihyperglycemic, normoglycemic and antihyperlipidemic in in vitro studies.

Gymnemic acids elicit antihyperglycemic effect by regeneration of pancreatic cells, stimulating insulin release and inhibition of glucose absorption.8 Gymnemic acid is a well known constituent used in polyherbal formulations for management of Diabetes Mellitus. Gymnemic acid is a triterpenic glycoside obtained from Gymnema sylvestre leaves. Present study is undertaken to develop and validate a rapid sensitive method of estimation of the the constituent.

Major saponin glycoside found in Gymnema leaves is gymnemic acids. Gymnemic acid, a group of complex triterpenic glycosides were reported to be responsible for the antidiabetic action. Gymnemagenin is not present in free form, it is a common aglycone of gymnemic acids which can be produced after acidic and basic hydrolysis 1. Direct estimation of gymnemic acids is very difficult because they are a complex mixture of several closely related compounds and are not available commercially as reference compounds. The study was undertaken evaluate the chemical and analytical methods for characterization of hydrolyzed product gymnemagenin.

Processing of Plant materials: Gymnema sylvestre leaves 1.5 kg of cleaned dried leaves powdered passed through 40 mesh and stored in a closed vessel for further use.

Preparation of ethanolic extract from leaves of Gymnema sylvestre: 7 Extract was prepared according to Farzana et al., 2010 with slight modification. 1.5 kg of dry plant leaf material was packed in a Soxhlet thimble and extracted continuously with 80 % ethanol until the material is completely exhausted. The final product is a dark green amorphous powder after the evaporation of solvent. The collected solutions were filtered through Whatman No-1 filter paper. The solvent was evaporated under reduced pressure at 90 °C by Rotary evaporator (Superfit™ model) and the green gummy extract was stored at – 20 °C in a freeze until used for further analysis.

Chemical tests to confirm the presence of gymnemic acid 3:

Phenolic test: A pinch of extract was taken into a clean test tube and dissolved 2 ml of methanol. Then a few drops of 1% alcoholic ferric chloride were added.

Steroid test: A pinch of extract was added to a solution of 2 ml CHCl3 and 1ml of acetic   anhydride. A few drops of Conc. H2SO4 were added from the sides of the tubes.

Glycoside test: A pinch of extract was taken in a dried test tube and dissolved in 2ml of methanol. 1ml of alpha naphthol alcoholic solution was added from the sides of the test tube.

Identification of gymnemic acid and gymnemagenin in the extract by Thin Layer Chromatography (TLC): 2, 3 Identification and separation of Gymnemic acid in the extract was carried out by TLC. TLC of the extract was performed by dissolving the extract in methanol and applying the spots over Silica gel plates. Gymnemagenin is identified after hydrolysis of the extract. The plate is eluted using solvent system, and the chromatogram was dried to remove solvent, cooled and sprayed with the detecting reagents. The plates were dried to enable the full colour of the spots to develop.

Sample preparation before hydrolysis: 100 mg of Gymnema sylvestre extract was dissolved in 10 ml of methanol. 10 μl was applied on TLC plates.

After hydrolysis: 100 mg of Gymnema sylvestre extract was dissolved in 10 ml of 50% (v/v) ethanol, and then 2 ml of KOH was added and heated on a boiling water bath under refluxed for an hour and then cooled. To this 1.8 ml of 12N HCl was added and heated on water bath. After cooling the pH was adjusted to 7.5-8.5 with 11% KOH. This solution was dissolved with 50% (v/v) ethanol and filtered. 10 μl was applied on TLC plates.

Solvent front: Run up to 8 cm.

Detecting agent Modified Vanillin Sulphuric Acid reagent (Heating at 105 oC for 5-8min) Quantitative analysis of gymnemagenin by HPLC 4 and HPTLC 5, 6 has been reported.

HPLC technique for estimation of gymnemagenin: 1, 4, 5, 6

Preparation of standard solution: 0.0100 g of standard gymnemagenin was dissolved in 10 ml methanol (0.9 mgmL-1) (Stock solution SS). The solution was stored in refrigerator and found to be stable for one month.

Chromatographic system: LC system Shimadzu with isocratic pumps LC 20-AT, and U.V Detector SPD 20-A was used. The data were acquired on the LC-solutions administrator data system. Reverse Phase Column (Phenomenex) C18 (250 mm x 4.6mm, 5A° particle size) and a mobile phase consisting of 100 mM ammonium acetate buffer: acetonitrile (75: 25, v/v) were employed and pH of the buffer was adjusted to 6.7 with ortho phosphoric acid. The mobile phase was filtered through 0.22 μm Millipore filter and degassed by sonication for 30 min. The flow rate was adjusted to 0.8 mL min-1 with run time of ten minutes. Injection volume was adjusted to 100 μL and detection was made at 220 nm.

Preparation of sample solutions: An accurately weighed sample was refluxed for two hours in 2.5 N 50 % methanolic HCl, filtered and filtrate was added in ice cold water to obtain precipitate which was refluxed for 2 h in 50 ml of 2% methanolic KOH. The mixture is cooled, diluted with water and extracted with ethyl acetate. Ethyl acetate layer was evaporated and residue was reconstituted in 10 mL HPLC grade methanol.

RESULTS AND DISCUSSION: The method of preparation of ethanolic extract used was adopted based on the yield of the product from different methods. The present method is derived from the method 3 by the Farzana chowdhary et al., 2010 which is the rapid, simple and efficient method with a substantial yield of Gymnemic acid. The yield of Gymnemic acid obtained in the present work was 12.35g from 1.5kg of powdered Gymnema leaves.

Valvirathi et al., 2006 Confirmed the detection of Gymnemagenin in hydrolyzed extract but using a different solvent system. We attempted to analyze Gymnemagenin by HPLC method adopted by Priti D. Trivedi et al., 2011 which is a quick and validated method. 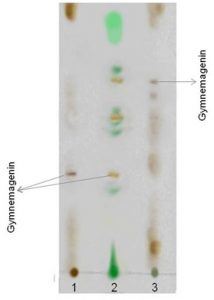 TABLE 1:  PARAMETERS OF THE DEVELOPED HPLC METHOD FOR IDENTIFICATION AND QUANTIFICATION OF GYMNEMAGENIN

The HPLC method developed for estimation of Gymnemagenin is quick, reliable and sensitive. Our method provide good separation at room temperature with short run time i.e., 10 min. Our method has better sensitivity and good separation than the reported methods. The proposed method is sensitive with LOD of 1 μg mL-1. The retention time for Gymnemagenin in extract was found to be 7.366 minutes with the concentration of 3.62 µg/ml. (Table 2 and Fig. 3). 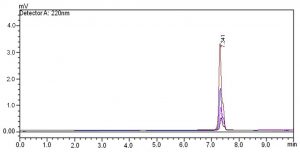 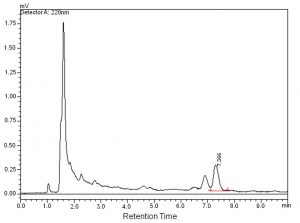 CONCLUSIONS: On the basis of the results of the present study, it was concluded that Gymnemagenin, an aglycone of Gymnemic acids can be identified and characterized using analytical techniques, TLC and HPLC. The parameters developed can be useful for analysis of Gymnemagenin in the Gymnemma leaves extracts.

ACKNOWLEDGEMENTS: The authors wish to acknowledge The Dean Faculty of Pharmacy, Osmania University, Principal Dr .V.H. Sastry and Management MESCO college of Pharmacy for their constant support and encouragement.