ABSTRACT: The aim of this study was to extract the secondary metabolites of Coscinium fenestratum stem extracts and to determine the alkaloid berberine using HPLC. Phytochemical analysis was carried for acetone, chloroform, methanol and Aqueous fractions of stem extracts. Total phenolic content and total flavonoid contents were estimated using standard Gallic acid and Quercitin respectively. TLC and HPLC were performed for alkaloid to determine the berberine content present in the stem extract. Preliminary phytochemical screening revealed the presence of alkaloids, saponins, steroids, phenolic substances and cardiac glycosides. Steroids and tannins were absent in the stem extract. The stem methanolic extract of C.fenestratum contained large amount of phenolics18.35±0.56mg GAE/g extract and the flavonoid was found to be 12.8±0.88 mg QE/g extract respectively. The concentration of berberine in the stem was found to be 0.2462%.

INTRODUCTION: Phytochemicals are naturally occurring compounds in plants. They are the chemical compounds mainly produced in plants during the regular metabolic processes. Medicinal plants are of great value to human beings. From ancient times, people have been using various plants to treat many diseases 1.These medicinal plants contain some chemical compounds that have a specific physiological action. These bioactive compounds are also called as secondary metabolites; which include alkaloids, tannins, saponins, flavonoids, phenolic compounds 2.

These secondary metabolites are widely used in agriculture, Human treatment and various other areas. More than 80% people use traditional medicines, which mostly consists of herbal components.

The Phytochemical research based on the ethno-medicine is usually considered an effective approach in the discovery of new anti-infective agents from higher plants 3. Medicinal plants are the richest bio resource of drugs used in traditional systems of medicine, pharmaceuticals, food supplements and also aid as the chemical entities for the synthetic drugs 4. Knowledge of the chemical components of plants is desirable, not only for the discovery of new drugs, but also because such information can be of great value in disclosing new resources of such chemical substances 5.

Coscinium fenestratum (Gaertn.) Colebr. is a dioecious woody climber which is also called as tree turmeric belongs to the family Menispermeaceae. In India, it is restricted to the Western Ghats, mostly in the high rainfall wet evergreen forests, moist evergreen, semi-evergreen and semi-deciduous forests at 500-750 m altitude 6, 7, 8. In traditional medicine, the stem and roots are claimed to have used as an antidiabetic, antibacterial and antipyretic. They are useful to treat dysentery, malaria, fever and ophthalmia.

Collection and identification of plant material: The stem and the leaves of C. fenestratum obtained from the foot hills of Western Ghats of Karnataka were used for the investigation. The plant was authenticated by Dr. G.K. Bhat, a well-known taxonomist from Udupi, Karnataka, India. The herbarium samples have been deposited in the dept. of Botany, St. Aloysius College, Mangalore, Karnataka. The plant samples were air-dried and ground into uniform powder using Wiley grinder and stored in air tight container for further use.

Solvent extraction: The dried stem powder was extracted with acetone, chloroform and methanol in a Soxhlet extraction method. About 30gm (dry weight) of powdered stem material was taken in a thimble and extracted with 200ml of different solvents separately. The process of extraction was carried out for 8-10hrs or till the all the color was removed from the material. The extract was evaporated to dryness in a rotary flash evaporator. The concentrated extract was stored in desiccator for further to be used in phytochemical analysis

Phytochemical Screening: Chemical tests were carried out using acetone, chloroform, methanol and Aqueous fractions. The phytochemical analysis was carried out according to the protocols mentioned by 9, 10.

a)      Folin Reagent Test: To a few drops extract, few drops of Folin reagent were added. Blue color indicates the presence of Phenolics.

b)      Ferric Chloride Test: To a few drops of extract in 70% alcohol, add a few drops of FeCl3. Green or blue color indicates the presence of water soluble Phenolics.

d)     Lead Acetate Test: To a few drops of extract, a few drops of Lead acetate were added. Yellow precipitate indicates the presence of Flavonols and Flavones.

a)      To 5ml of dilute Ammonia solution, 3ml of aqueous filtrate was added followed by the addition of concentrated H2SO4. Yellow color formed, disappears on standing indicates the presence of Flavonoids.

b)      Few drops of 1% Aluminum solution was added to the filtrate. Yellow color indicates the presence of Flavonoids.

c)      Few grams of powder heated with 10 ml of Ethyl Acetate over a steam bath filter. To 4 ml of the filtrate add 1ml of Ammonia solution and shake vigorously. Yellow color indicates the presence of Flavonoids.

d)     A few grams of extract were heated in microfuge tube, a piece of metallic Magnesium and 3 drops of concentrated HCl was added. Red or orange color indicates the presence of Flavonoids.

a)      a) 200mg of plant material was dissolved 10ml distilled water and filtered. To 2ml of the   filtrate add 2ml 0.1% FeCl3 Solution. Blue black precipitate indicated the presence of tannins.

b)      Vanillin Test:To the extract, few drops of 10% vanillin in Ethyl Alcohol and concentrated HCl were added. Red color indicated the presence of tannins.

c)      Lead Acetate Test: To a few drops of the extract few drops of lead acetate was added. Yellow or florescent yellow precipitate indicated the presence of tannins.

a)      200 mg of plant material was dissolved in 10ml of Methanol and filtered. To 2ml of filtrate, 1% HCl and 6 drops of Mayer’s reagent was added. Creamish, brownish red or orange precipitate indicated the presence of Alkaloids.

a)      Frothing Test: To 0.5ml of filtrate, add 5ml of water. Shake vigorously. Persistence of froth for at least 10minutes indicated the presence of saponins.

b)       To 2g of the plant materials, add 20ml of water and boil in water bath and filter. To 5ml of the filtrate add 2.5ml of water. Shake vigorously. Stable persistence of froth.

The froth was mixed with 3drops of olive oil and shook vigorously. The formation of emulsion indicated the presence of saponins.

a)      2ml of Acetic Anhydride was added to 0.5grams of Ethanolic extract. 2ml of H2SO4 was added. A color change from violate to blue or green indicated the presence of steroids

b)      Lieberman Burchard Test reaction: (To 200mg of plant material, add 10ml of chloroform and filter). To 2ml of the filtrate add 2ml of Acetic Anhydride and concentrated H2SO4. A blue or green color indicated the presence of steroids.

a)      Salkowski Test: 5ml of extract was mixed with 2 ml of chloroform. Add 3ml of concentrated H2SO4 along the sides to form a layer. A reddish brown color indicated the presence of Terpenoids.

b)      Test for Monoterpenes: To a few drops of extract, few drops of 10% Vanillin in Ethanol were added. Then add a few drops of concentrated H2SO4. A red color indicated the presence of terpenoids.

Test for Cardiac Glycosides: To 5ml of extract add 2ml of glacial Acetic acid and 1 drop of FeCl3. This was under layered with concentrated H2SO4. A brown ring of the interface indicates deoxy sugar

Detection of berberine content in the stem extracts using TLC and HPLC:

The flow rate was kept constant 0.6ml/min and the detection was done at 266nm. Calibration was done using standard berebrine (Sigma, USA) at concentrations of 25, 20, 100, 250 and 500µg/ml using methanol as solvent. The stem extract were assayed in triplicate and peak areas corresponding to berberine was compared with calibration curve and amount of berberine present in the sample was determined.

The stem methanolic extract of C. fenestratum contained large amount of phenolics18.35±0.56mg GAE/g extract and the flavonoid was found to be 12.8±0.88 mg QE/g extract respectively. 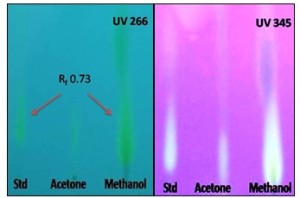 HPLC Analysis: The HPLC analysis was carried out in isocratic conditions and a Retention time of 2.81min was obtained for standard berberine. TheHPLC fingerprints of the methanolic stem extract of C. fenestartum showed major peaks at 2.8, 3.9, 4.7min. The calibration curve for berberine was found to be linear 0.1 to 0.01mg/ml (r2=0.97). The linear regression equation for the calibration curve was y= 15480109-5000, where y is the peak area of berberine and x is the concentration of berberine (µg/ml). The average recovery was 98.2-99.35%. The concentration of berberine in the stem was found to be 0.2462%. 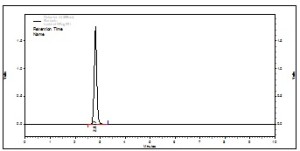 FIG. 2: HPLC CHROMATOGRAM OF STANDARD BERBERINE. BERBERINE PEAK AT THE RETENTION TIME 2.8MIN DETECTED AT A WAVELENGTH OF 266nm 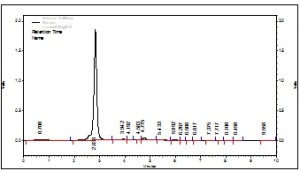 DISCUSSION: Phytochemical analysis of C. fenestratum revealed the presence of saponins, phenolic substances, alkaloids and carbohydrates. Steroids were found to be absent in all the extracts. Saponins were found in the Methanolic and aqueous extracts of C. fenestratum stem extract. Saponins are known to possess blood cholesterol lowering activity 13. The mechanism proposed is that it binds to cholesterol in the intestinal lumen and as result cholesterol is less absorbed. Alkaloids have been associated with medicinal uses and they have a role in cytotoxicity 14.

Glycosides have a role in lowering the blood pressure 15. They are used in blood tonics for treating heart failure by using blood pressure regulation 16. Terpenoids are active against various human cancer cell lines.

Phenolics and Flavonoids are responsible for the antioxidant properties of the medicinal plants. The antioxidative property of flavonoids may be due to different mechanism like scavenging of free radicals, chelation of metal ions 17.

The presence of phytochemicals will contribute to the medicinal as well as the physiological properties of the plant. Our studies show that the main ingredient present in the stem extract was found to be an alkaloid, berberine. Since the plant has many phytochemicals in it, it can be effectively used as an herbal medicine for the treatment of various diseases.

ACKNOWLEDGEMENT: The authors thank the UGC for providing financial assistance through Minor Research Project and also thank the Principal and Management of St. Aloysius College (Autonomous), Mangalore for the facilities for carrying out the work