EXTRACTION, CHARACTERIZATION AND INHIBITION OF POLYPHENOL OXIDASE IN SOLANUM MELONGENA

EXTRACTION, CHARACTERIZATION AND INHIBITION OF POLYPHENOL OXIDASE IN SOLANUM MELONGENA

ABSTRACT: Enzymatic browning is a process that occurs in fruits and vegetables by the enzyme polyphenol oxidase, which results in brown pigments reduce shelf life which indirectly causes huge domestic loss to the farmers during the post-harvesting process. In this context, the present study was carried out to preserve and increase the shelf life of Brinjal vegetables from enzymatic browning using ascorbic acid. The seeds of Brinjal hybrid and wild were treated with (0.5-2%) concentrations of Ascorbic acid; after 21 days of treatment, the plant material was extracted, Partially purified, and analyzed for enzyme activity. The polyphenol oxidase was extracted and determined for enzyme activity, phenol content, protein concentration as well as functional group determination using FTIR analysis. The polyphenol oxidase activity decreased with an increase in ascorbic acid concentration. The study revealed that the protein content in the Brinjal hybrid variety had a maximum of 221 µg/ml, whereas the wild brinjal variety possesses 180 µg /ml. The phenolic content of the hybrid Brinjal variety was found to be 67 µg/ml, whereas the wild brinjal variety showed 54 µg /ml. The result of this study Suggested that Ascorbic acid can be used as novel alternative inhibitors.

INTRODUCTION: Fruit and vegetables have a high content of fiber, vitamins, antioxidant compounds, which benefits the health of the consumers. However, changes in the antioxidant compounds may occur during harvesting, storage (fresh-cut fruits) of these fruits. These changes induce a pronounced loss of the antioxidant qualities and microbiological qualities 1 (Lindley, 1998). The major group of browning reactions is enzymatic browning which is a process that involves enzymatic action and is considered as an indicator of quality loss responsible for many fresh and processed fruits and vegetables such as dates, bananas, apricot, and potato.

This process occurs naturally due to the action of the enzyme polyphenol oxidase (PPO) in the presence of oxygen on phenolic compounds and resulting in a brown compound called o-Quinones. During storage, o-Quinones polymerize nonenzymatically to produce heterogeneous deep dark polymers called melanin 2.

Thus, in the food industry, preservation against oxidation in food during storage and processing has become an increasing priority. Enzymatic browning is the main oxidative reaction. They involve two oxidoreductase enzymes: polyphenol oxidase (PPO) and peroxidase (POD) 3. A broad range of plant species have signiﬁcant PPO activity (Mayer, 2006), and many show differential expression in cells and tissues. Polyphenol oxidase (PPO) (monophenol, dihydroxy-L-pheny1alanine: oxygen oxido-reductase EC 1.14.18.1) is a copper-containing oxidoreductases enzyme that catalyzes the hydroxylation of monophenols to o-diphenols to o-quinones 4. PPO enzyme is found in all living organisms, including plants in the chloroplast, animals as well as microorganisms. In plants, it is involved in defense mechanisms. When a plant gets an injury or incision in the presence of oxygen, certain phenolic compounds are oxidized by the PPO enzyme to form a polymeric structure that prevents microbial contamination 5. Because of the wide commercial applications of PPO in various fields and the development of more effective methods to prevent enzymatic browning, the properties of PPO, preservation conditions from its various sources need to be studied. The objective of our study was to extract and characterize polyphenol oxidase from eggplant and inhibition of PPO activity.

Brinjal (Solanum melongena), also known as eggplant, guinea squash, or aubergine is a warm-weather crop mostly cultivated in tropical and subtropical regions of the world. It is native to the "Indo-Chinese origin. It is an economic flowering plant and is one of the species of the Solanaceae or nightshade family, and it is included under the genus Solanum covering more than 1550 species Solanum melongena grown for its often purple edible fruit 6-7 and the contents of nutrients has lower carbohydrate and lipid content of 11.77 ± 1.55% and 1.65 ± 0.62% respectively were found in Solanum melongena.

Brinjal or eggplant (Solanum melongena L.) is a widely grown vegetable in South and South-East Asian countries. He also mentioned mineral contents like calcium, iron, sodium, and nitrogen were higher in the round variety of Solanum melongena, while magnesium, phosphorous, potassium was higher in the oval variety. The zinc contents were the same in both varieties. It is rich in total water-soluble sugars, free reducing sugars, and proteins, and it is a good source of minerals and vitamins 8.

During food processing, appropriate measures will prevent the process of browning in fruits. Many methods of polyphenol oxidase inhibition are known, such as sulfur dioxide, heating and sulfites, sodium chloride, exclusion of oxygen, boric acid, methylation of phenolase substrates, acids, and borates 9. In general, their action is to decrease the rate of enzymic browning by lowering the tissue pH. The optimum pH of PPO lies within the range 6-7; below pH 3, PPO activity is inhibited.

Ascorbic acid is the most significant inhibitor of the PPO enzyme because, in addition to its vitamin value, it has no corrosive action upon metals and no detectable flavour at the concentration used, which would interfere with the acceptability of the final processed product 10.

Pretreatment with Ascorbic Acid: The seeds of brinjal (hybrid and wild variety) were surface sterilized by immersion in 0.5% sodium hypochlorite (NaOCl) solution for 5 min to prevent fungal infections and then washed three times with sterile, distilled water to remove any NaOCl residue. After washing, the seeds were pretreated with ascorbic acid by soaking for 24 h at room temperature in an ascorbic acid solution (0.5%, 1%, 1.5%, 2%). Seeds pretreated with distilled water was taken as control 10.

Collection and Processing of Soil Sample: The soil was collected from the farmyard of Rampura, Bangalore. The soil sample was sieved to remove root, pebbles, plant debris. The seeds of brinjal (wild and hybrid variety) were sown on various pots. After 30 days, the grown brinjal plant materials were collected.

Extraction of Polyphenol Oxidase Enzyme: Ten grams of plant material were homogenized in 80 mL of 0.1 M sodium phosphate buffer (pH = 7.0) containing 10 mM ascorbic acid and 0.5% polyvinyl-pyrrolidone and extracted with the aid of a magnetic stirrer for 1 h. The crude extract samples were centrifuged at 4000 rpm for 20 min. Pellet was discarded, and the supernatant was collected and used as crude enzyme extract 11.

Partial Purification:  Solid (NH4)2SO4 was added to the supernatant to obtain 80% saturation (40 Celsius). After 1 h, the precipitated proteins were separated by centrifugation at 4000 rpm for 20 min. The precipitate was dissolved in a small amount of 50 mM phosphate buffer (pH 7.0) dialyzed in a cellulose bag at 40 Celsius in the same buffer for 24 hrs. The dialyzed extract was used as a partially purified PPO enzyme source in the subsequent experiments 11.

Determination of Enzyme Activity: PPO activity in two varieties of brinjal was followed by recording the absorbance increase of 3 mL reaction mixture at 420 nm using a UV/Vis spectro-photometer.

The 0.1 mL partially purified PPO enzyme extract was added to 2.9 mL of 10 mM catechol substrate prepared in 0.1 M KH2PO4 buffer (pH 6.8) at room temperature. 2.9 ml of 10 mM catechol substrate was taken as blank. Absorbance measurement was immediately started after adding enzyme solution. The alteration in absorbance for 5 min was monitored. One unit of PPO enzyme activity was described as the amount of enzyme that causes a change in absorbance of 0.001 per minute 12.

Estimation of Total Phenolic Content: The total phenolic content was determined using the Folin-Ciocalteu colorimetric method. Resorcinol (0.1 mg/ml ) was used as a standard for the construction of a protein standard curve 13.

Determination of Protein Concentration: Protein concentrations were determined following the Lowry method. Bovine serum albumin (0.5 mg/ml) was used as a standard for the construction of a protein standard curve.

Optimization of the Effect of Temperature on PPO Activity: The optimum temperature of two varieties of brinjal for PPO activity was determined. The enzyme was measured at different temperatures (30-80 °C), using a 3 ml reaction mixture (0.2 ml enzyme, 0.5 ml catechol, 2.3 ml phosphate buffer).

Injection port temperature was ensured as 200 ºC and Helium flow rate as one ml/min. The ionization voltage was 70eV. The samples were injected in split mode as 10:1. Mass spectral scan range was set at 45-450 (m/z) 15.

RESULTS AND DISCUSSION: Brinjal PPL seeds (Hybrid variety) were treated with different concentrations of ascorbic acid (0.5%, 1%, 1.5%, 2%). The treated seeds were subjected to grown for 30 days time interval and extracted the PPO content.

The extract was screened for enzyme activity and further characterized for the optimization of parameters such as pH, temperature, and metal ions. Treated seeds were sown in soil and grown for 30 days Fig. 1.

At the end of the 30th day, the plants which were treated with 0.5%, 1%, 1.5%, 2% Fig. 2 showed almost the same growth pattern but slightly less growth response when compared to control plants 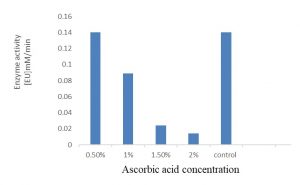 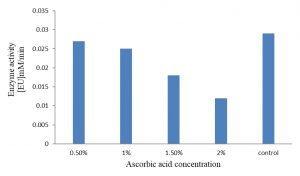 Effect of Temperature: Brinjal plants (hybrid) PPO activity, which was treated with ascorbic acid Fig. 5, peaked at 40   for catechol, and above 70 the PP0 activity was gradually decreased. Poly-phenoloxidase in eggplant (Solanum melongena L.) is completely inactivated after heat treatment at 75 for 30 min or 80 for 5 min (Fujita and Tono, 1988). Effect of temperature on partially purified polyphenol oxidase enzyme from brinjal plants variety (hybrid) which was treated with ascorbic acid shows optimum activity at temperature 40 same as the standard (control) polyphenol oxidase enzyme characteristic hence the study reveals ascorbic acid doesn't change the character of PPO but only inhibits its activity. 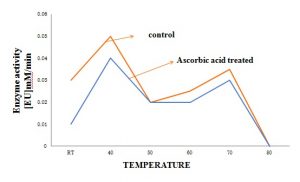 Brinjal plants (wild) PPO activity, which was treated with ascorbic acid Fig. 6, peaked at 40   for catechol, and above 60 the PPO activity was gradually decreased. Polyphenoloxidase in eggplant (Solanum melongena L.) is completely inactivated after heat treatment at 75   for 30 min or 80 for 5 min (Fujita and Tono, 1988). 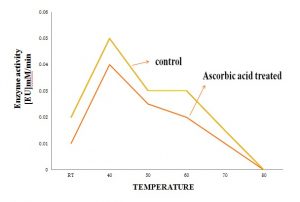 Effect of pH: The effect of pH on the polyphenol oxidase activity was found that below pH 3 the phenolase activity is very weak, while it has a considerable activity within the range of pH 5-7 Fig. 7. This is in agreement with Schultz (1959), who found that levels of pH below 2.5 to 2.7 were very suitable for the inactivation of enzyme browning in apple. Analysis on the pH stability test, the enzymatic activity of PPO extracts was determined. According to the analysis results, the PPO activity was nearly stable in the neutral condition. But the enzymatic activity of PPO extracts was decline near acidic and alkaline pH conditions. 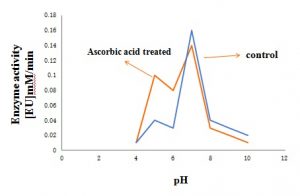 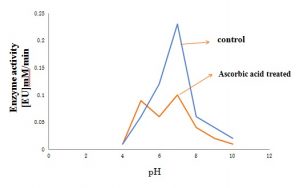 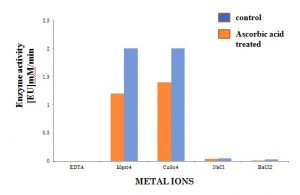 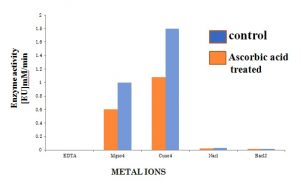 The specific N-H and C-H bending bands of PPO that was purified from brinjal were recorded at 3443.15 cm-1 and 2875.00 cm-1, respectively. It was clear that wavenumbers of the characteristic peaks in the FTIR spectrum of PPO were shifted to higher/lower wavelengths. This is because of the presence of some impurities in the enzyme extract.

TABLE 3: PHYTOCOMPONENTS IDENTIFIED IN THE EXTRACTS OF SOLANUM MELONGENA BY GC-MS 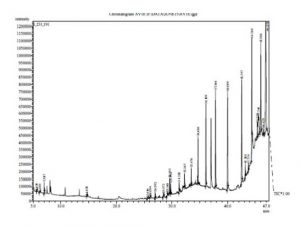 CONCLUSION: The food industry still faces the major problem of how to prevent enzymatic browning while considering food safety, regulations, marketability of the treated products, and the cost associated with the prevention process. There are several inhibitors used by researchers to prevent enzymatic browning. The present work described the characteristics of the polyphenol-oxidases in brinjal plant variety (hybrid and wild) and the effect of ascorbic acid at different concentrations (0.5%, 1%, 1.5%, 2%) for inhibition of PPO enzyme.

Usually, brinjal plant processing in the food industry is a serious problem, it could be suitable for minimal processing if it possesses low PPO activity. The characterization of the PPO extracted from 2% ascorbic acid-treated plants showed optimal conditions like pH (7.0) and temperature 40 ºC for inhibition by ascorbic acid. This information could be useful in the production of minimally processed eggplant in the food industry. Ascorbic was found to be the most suitable organic acid to increase the quality and shelf life of eggplant because it was eﬀective at 2% concentration, and it is unlikely to aﬀect sensory parameters and, at the same time, may increase the product's nutritional value with low additional cost.

The PPO activity was inhibited by ascorbic acid treatment. Thus, ascorbic acid treatment can be implemented during the processing of eggplants fruits to prevent browning. However, a more proper procedure should be proposed to meet the growing consumer demand and acquire wider applications in the inhibition of PPOs. The result of this study showed that ascorbic acid was a novel alternative inhibitor to synthetic PPO inhibitors that could be utilized in various areas such as the food industry, health care & medicine to cure skin disorders.