INTRODUCTION: Terminalia arjuna (TA) commonly known as “Arjuna” in ancient literature of Ayurveda, belonging to the family Combretaceae is a deciduous tree found mainly in South Asian region mainly in sub-Himalayan parts of India and Bangladesh 1-2. The Terminalia arjuna has been used since years for treatment of various ailments in the human body in different forms and sources.

The associated biological activities described in the literature includes cardiac effects like cardiotonic, hypocholsteremic, anticoagulant, antithrombotic, anti-hyperlipidemic, anti-inflammatory, wound healing, antifungal, antiviral etc. 3-8  The different parts of the TA plant have been explored for different biological properties like the cardiotonic properties have been mentioned in the fruits of TA, the leaf extract has been ascribed for earache problem and the cardiotonic and anti-ulcer effects have been reported in the bark of TA 9-12.

Further, these phytoconstituents have been associated with different activities viz. β- sitosterol in hypocholsteremic, arjunoetosides for diuretic action, arjunine in wound healing, ellagic acid and gallic acid as antiinfective agents, arjunone and other flavanoids as cardioprotective, hepato protective agents, arjunic acid and arjunolic acid for antioxidant and protective effect 15-21.

The nickel containing urease enzyme occurring in plants, bacteria and fungi has been involved in the hydrolysis of urea to ammonia and carbon dioxide and hydrolyze it multifold than the routine process. Various infections of GIT and the UTI’s have been associated with the increased pH due to presence of the urease that produces ammonia and may lead to pyelonephritis, kidney stone formation, hepatic encephalopathy and ultimately hepatic coma in human beings and animals 22-23. The main problem is associated with the gram positive bacteria H. pylori that has ability to survive even at low pH values of stomach and is responsible for gastric and duodenal ulcers causing cancer of GIT. This is due to the fact that the urease enzyme gets attached to the surface of the bacteria and keeps on releasing the urea that promotes the existence and growth of H. pylori in gut of humans 24-27. 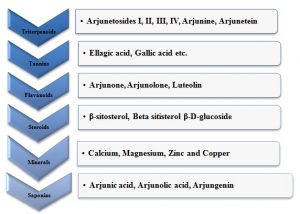 MATERIALS AND METHODS: The stem bark of Terminalia arjuna was procured from the local market in Khari Baoli, New Delhi, India. The identification of the plant material was made by CSIR-NISCAIR, New Delhi vide. Ref. No. NISCAIR/RHMD/Consult/2014/2551/130. All the chemicals used during the study were of highest purity available, the marker compounds arjunic acid and arjunolic acid were purchased from Fluka and Sigma Aldrich respectively. Microwave and Ultrasound assisted extraction was performed on Sineo Microwave UWave-1000 instrument. Quantitative estimation of marker compounds was done using High Performance Thin Layer Chromatography (HPTLC) on CAMAG system on WINCATS version 1.4.1. Absorbance study of urease inhibitory activity of the extracts was carried on Shimadzu double beam UV-Visible spectrophotometer.

Soxhlet extraction (SE): The soxhlet extraction of coarsely powdered stem bark of Terminalia arjuna was wrapped in filter paper and was extracted using soxhlet technique for 72 h using ethanol as solvent 32. The extract thus obtained was filtered and air dried.

Ultrasound assisted extraction: The ultrasound assisted extraction of the stem bark of Terminalia arjuna was performed using temperature (55oC) and solvent (ethanol) as constant parameters while the power (800 W, 550 W, 300 W), time (10 min., 15 min., 20 min.) and solid/solvent ratio (1:20, 1:50, 1:80) as variable parameters. The central composite design was used to carry out the optimization of variable experimental parameters and values of parameters for the optimized batch were 800 W (Power), 10 minutes (Time) and 1:80 (Solid/solvent ratio).

The TLC plate was then dried and scanned using densitometric Camag TLC scanner III on absorbance mode at 366 nm. Deuterium lamp was used as the source for radiation. Standard solutions of arjunic acid and arjunolic acid (100 µg/ml in ethanol), using a volume of 2-16 µl for preparation of eight point calibration curve corresponding to the amount of 200-1600 ng were used to prepare the standard plots with concentration versus area under peak.

Then, the peaks present in HPTLC chromatogram of the two extracts were analyzed using their Rf values and were confirmed by overlay absorption spectra. The estimation of quantity of arjunic acid and arjunolic acid present was made using the standard equation derived from Fig. 1 and 2.

Molecular docking study of marker and standard compounds: Molecular docking study was carried to identify the binding affinities and interaction between the standard and the marker compounds with the target protein Jack Bean Urease 3LA4 using glide software (Schrodinger Inc. U.S.A.-Maestro version 10.2). In order to prepare the ligands, the 3-dimensional structures of the test and standard compounds (ligands) were retrieved and downloaded as sdf mol files from Pub.chem database. The ligands were further processed using the lig.prep tool from Schrodinger to obtain the perfect conformation by the addition or removal of hydrogen atoms with respect to the OPLS_2005 force field. The preparation of protein target was done using the protein Jack Bean Urease 3LA4 with high resolution 2.05 Å and was retrieved from protein data bank (PDB) (http://www.rcsb.org).

The water molecules were removed and a single chain was selected among the two chains. Generally, all water molecules (except those coordinated to metals) are deleted, but the one that was connected between the ligand and the protein may sometimes get retained. The glide/docking was performed via grid generated output file uploaded as an input for ligand docking against prepared protein targets in glide. xp high precision mode.

In vitro evaluation of urease inhibitory activity 34: The activity of urease enzyme for different extracts was determined spectrophotometrically taking thiourea as standard. The sample extracts (1 mL) were mixed with 1 mL of Jack Bean Urease (5U/mL) and 4 mL of buffer solution of pH 8.2 (100 mM urea, 1 mM EDTA, 0.01 M potassium hydrogen phosphate, 0.01M lithium chloride). The resulting mixtures were then incubated in a test tubes for about 10 minutes at 370C. In addition, the solutions of 4 mL alkali reagent (0.5% w/v sodium hydroxide, 0.1% sodium hypochlorite) and 4 mL phenol reagent (1% w/v phenol, 0.005% w/v sodium nitroprusside) were added to each test tube. Serial dilutions of this solution were made to obtain the concentration of (25, 50, 75, and 100) µg/ml respectively. The inhibition percentage for urease was calculated as follows:

Where, A control = Absorbance of the control reaction

A sample = Absorbance of the test compound 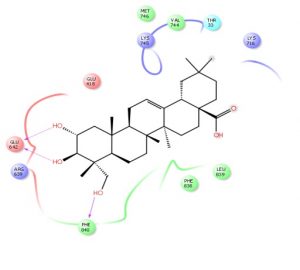 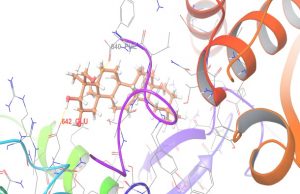 TABLE 2: PERCENTAGE INHIBITION AND IC50 VALUES OF THE SELECTED EXTRACTS

CONCLUSION: The biologically active Terminalia arjuna plant has been in use from ancient times for its cardioactive principles while the protective effect of this plant has also been reported by many researchers. However, the anti-urease effects of Terminalia arjuna has not been explored even after it’s reported very good antimicrobial effect. Authors have attempted to test the in vitro urease inhibitory activity for the bark extracts of Terminalia arjuna after obtaining the positive results of molecular docking of the marker compounds arjunolic and arjunic acids compared with the standard thiourea drug when performed on urease 3LA4 enzyme protein. Arjunic acid demonstrated better potential than standard thiourea (and also the arjunolic acid) for urease inhibition, on the basis of molecular docking studies. The in vitro urease inhibitory activity of the extracts was performed spectrophotometrically taking thiourea as standard.

The percentage yield of the marker compounds was in order MAE>USAE>SE>RTE. The molecular docking study suggested that the arjunic acid (-55.511 Kcal/mol) exhibited better results of inhibition compared with the free energy values of arjunolic acid (-40.765 Kcal/mol) and standard thiourea (-25.846 Kcal/mol). Hence, there exists a correlation between the yield of the marker compounds and the urease inhibition potential of differe extracts of stem bark of Terminalia arjuna, as demonstrated by molecular docking and wet lab results.

ACKNOWLEDGEMENT: The authors are thankful to Schrodinger LLC, for providing the access to the software             and their help to complete this work.