ABSTRACT: The objective of this study was to extract ursolic acid (UA) from Ocimum sanctum, to synthesize its derivatives and to examine the improvement of the antioxidative activity. Present work involved structural modification of UA at the C-3 and C-28 positions. UA derivatives, namely UA-4 and UA-7 with distinct property were synthesized. Comparative evaluation of antioxidant activity of UA, UA-4 and UA-7 using in-vitro assays and lymphocyte model system involved: (i) inhibition of liposomal lipid peroxidation by UA and its derivatives (ii) assessment of trolox equivalent antioxidative capacity (TEAC) (iii) ABTS and DPPH radicals scavenging ability and (iv) cell death (MTT assay) under hydrogen peroxide (H2O2) induced oxidative stress. A moderate increase in antioxidant activity of compound UA-4 compared to UA was observed. In contrast, significant improvement in the antioxidant activity of UA-7 was observed. To evaluate antioxidant effects on lymphocytes, we exposed cells with UA and its derivatives along with hydrogen peroxide. This was followed by measurement of cell viability by trypan blue exclusion assay and cell death using MTT assay. UA-7 significantly protected lymphocytes against H2O2 induced oxidative stress. In conclusion, we propose that UA might be chemically modified to increase its antioxidant potential. Our studies also clearly showed that UA derivatives significantly decreased hydrogen peroxide-induced cell death due to the mitigation of oxidative injury.

Triterpenoids are a class of naturally occurring compounds that are found in a variety of plants 3-5.

Ursolic acid (UA) (3ß hydoxy urs-12 en–28 oic acid) is one such a triterpenoid found in plants like Ocimum sanctum 6, 7. It has been reported to possess a wide range of pharmacological properties 8. Many protective effects of O. sanctum are determined by strong antioxidative properties of its constituent UA 9. Earlier studies have shown that UA inhibits radiation-induced oxidative damage to human keratinocytes 10. However, UA derivatives have not been thoroughly explored for their anti-oxidant activity.

To find biologically more active derivatives of this naturally occurring triterpene, we selected methanolic extract of O. sanctum as the source of UA.

Oxidative stress occurs in the cells due to an imbalance between the prooxidant/antioxidant systems 11. It results in injury to bio-molecules such as nucleic acids, proteins, structural carbohydrates, and lipids 12. Assessments of the effectiveness of UA and its derivatives as antioxidants can be taken, asking the following questions. Does the compound act as an antioxidant in vitro? And, in lymphocyte model system, does it render lymphocytes more resistant to challenges with oxidizing agents in- vitro? Earlier investigators have studied lymphocytes as a model system as these cells contain a variety of redox and free radical scavenging systems 13. Hence, studies on the antioxidant effect of UA and its derivatives in blood lymphocytes could be of immense significance.

In brief, the objective of present work was to synthesize novel derivatives of UA with high antioxidant potential. To this aim, this study synthesized derivatives of UA by retaining ester functionality at C-3 and hydrogen donor group at either C-3 position and C-28 position of UA. Our present studies show that derivatives of UA are an important candidate as antioxidants. This information is currently unavailable and is essential to develop potential strategies to manage systemic dysfunction induced by oxidative stressors.

Extraction and Quantification of UA: The methanol crude extract obtained was suspended in CHCl3: MeOH (9:1) and subjected to gradient column chromatography by hexane, ethyl acetate, and methanol in increasing polarity. The fractions were collected and monitored on TLC for the presence of ursolic acid. All those fractions, which consisted of ursolic acid, were combined and the solvent was removed under vacuum. Evaporation of the combined fractions containing ursolic acid led to a white solid. The isolated ursolic acid was well characterized by melting point, U. V. and I.R. spectra as well as by comparing with an authentic sample in TLC and HPTLC, as shown in Fig. 1. 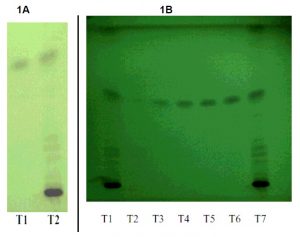 The ursolic acid was quantified using the CAMAG HPTLC apparatus. Calibration curve of ursolic acid was obtained by plotting peak area versus applied concentrations of ursolic acid. 10 µl of each standard solution of ursolic acid (72-576 ng/spot) were applied, and HPTLC was performed. After development, the plates were dried at room temperature in air, derivatized with Liebermann Burchard reagent and scanned at 530 nm in absorbance mode using tungsten lamp. The peak areas were recorded. 20µl of suitably diluted.

Sample was applied in triplicate on HPTLC plate. The plate was developed and scanned, as described above. The peak areas and absorption spectra were recorded, and the amount of ursolic acid was calculated using its calibration curve.

Synthesis of UA Derivatives: Ursolic acid (3 b-hydroxy-urs-12-en-28-oic acid) was used as the lead compound, and the structure modification was done as shown in Fig. 2. Synthesis of UA derivatives UA-4 and UA-7 and their structure confirmation by mp, IR 1H NMR spectra, and elemental analysis was done following procedure standardized in our laboratory 14.

In brief, to prepare compound UA-4; UA was reacted with acetic anhydride in Tetrahydrofuran (THF) in the presence of 4-dimethyl aminopyridine (DMAP), then reacted with chromium trioxide in an acetic acid solution containing 5% acetic anhydride to obtain intermediate compound (3b-acetoxy-urs-11-oxo-12-en-28-oic acid). This intermediate compound was reacted with chromium trioxide in acetic acid solution containing 5% acetic anhydride to obtain an intermediate, which was treated with oxalyl chloride to yield a crude intermediate (3b-acetoxy-urs-11-oxo-12-en-28-acyl chloride), which was further condensed with aniline in the presence of triethylamine to give UA-4 (N- [3b-acetoxy-urs-11-oxo-12-en-28- acyl] aniline). Compound UA-7 (Methyl N- [3β-butyryloxyl-urs-12-en-28-oyl]-2-amine acetate) was prepared by UA reacted with butyric anhydride in the presence of DMAP in THF. The intermediate UA-6 was obtained from UA-5 by treating with oxalyl chloride, which was then reacted with methyl glycinate to yield compound UA-7 (Methyl N-[3β-butyryloxyl-urs-12-en-28-oyl]-2-amine acetate). 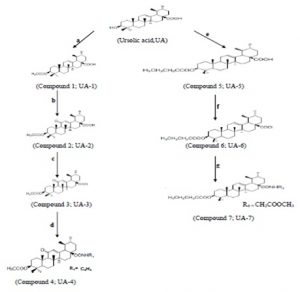 Evaluation of the Antioxidant Activity of UA and Derivatives using Various in -vitro Assays:

Inhibition of Lipid Peroxidation in Liposomes: The lecithin was dried under vacuum onto the wall of a round-bottom flask. The resulting lipid film was hydrated in 50 mm of Tris-HCl buffer at pH 7.4, shaken for 15 min and sonicated (samples thermostated at 0-2°C). Before the end of sonication a fluorescent probe, 3-[p-(6-phenyl)-1, 3, 5-hexatrienyl]-phenylpropionic acid was added to the liposome suspension. The assay was conducted by the procedure described earlier 15.

Trolox Equivalent Antioxidative Capacity (TEAC) for UA, UA-4, and UA-7: The assay was performed as previously reported with slight modifications 16. Samples (40 mg/ml concentrations) were mixed with 200 ml of ABTS+ radical cation solution in 96-well plates and absorbance was read (at 750 nm) in a microplate reader. Trolox equivalents (in mM) were derived from the standard curve at 5 min of incubation.

Determination of IC50-value of UA, UA-4 and UA-7 for ABTS and DPPH Radical Scavenging: The radical scavenging activity of UA, UA-4, and UA-7 against DPPH radical was determined spectrophotometrically 17, 18. The assay was based on DPPH radical reaction with an antioxidant compound that can donate hydrogen and gets reduced. IC50-value is the concentration of compound required to inhibit 50% of radical production.

Isolation of Peripheral Blood Lymphocytes: Blood samples were obtained from five donors (all males, healthy, non-smokers, 20–30 years old). Fresh whole blood (100 ml) was suspended in 1 ml RPMI-1640 containing 10% FCS in an Eppendorf 1.5 ml tube, then left on ice for 30 min. This was followed by addition of 200 ml lymphoprep to samples and centrifugation at 1200 rpm for 8 min at 4°C. Lymphocytes were retrieved above the boundary between RPMI and lymphoprep, washed with PBS (pH 7.4), centrifuged at 1000 ´ g and re-suspended in 30 ml PBS. The yield of lymphocytes was usually 106 per ml of blood with viability above 96%.

Co-Incubation of Lymphocytes with Purified UA or UA-4 or UA-7 and Hydrogen Peroxide for MTT Assay: After 24 hours of culture initiation in DMEM supplemented with 20 % fetal bovine serum, lymphocytes (at a concentration of 1×106 cells/mL) were treated with UA & derivatives (40 mg/ml) and hydrogen peroxide (25 μM) to study their effects on DNA damage. For protective effect, studies were carried out as follows:

For all experiments, lymphocytes were exposed for 2 h. UA or UA-4 or UA-7 were dissolved in DMSO at a concentration of 1000 mM with subsequent dilutions in the culture medium. For sham control, DMSO was diluted in medium to obtain 0.05 % concentration.

MTT assay: The MTT assay involved co-incubation of lymphocytes with UA or UA-4 or UA-7 as per experimental design. This was followed by addition of 0.5mg/mL of MTT to the incubated cells, and cells were kept for another 4 h at room temperature. After incubation tubes were centrifuged for 10min, medium with MTT was removed and 200 mL of DMSO was added. Absorbance was measured to at 570 nm.

Protective Effect of UA derivatives on lipid peroxidation: UA, UA-4, and UA-7 (all at 10 mM concentrations) were evaluated for the ability (compared to synthetic antioxidant TBHQ at 10 mM) to inhibit lipid peroxidation induced by Fe (II) ions in a liposomal model as seen in Fig. 3A. In the lipid peroxidation assay, the relative decrease in fluorescence showed that UA-4 was the moderately stronger antioxidant compared to UA (p<0.01) as appeared in Fig. 3B. The derivatization of C-28 position with R1-C6H5 groups attached to the UA skeleton elevated their ability to inhibit the rate of Fe (II)-induced lipid peroxidation. Compound UA-7 (Methyl N-[3β-butyryloxyl-urs-12-en-28-oyl]-2-amine acetate) with modification at C-3 as well as C-28 position was the most active under these conditions, and its antioxidant capacity was comparable to commercial synthetic antioxidants TBHQ. 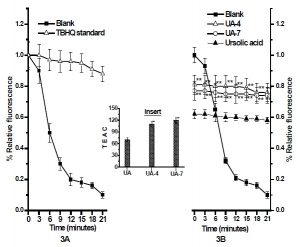 FIG. 3: INHIBITION OF LIPID PEROXIDATION INDUCED BY FE (II) OF (A) COMMERCIAL SYNTHETIC ANTIOXIDANTS TBHQ (40 mG/ML); (B) URSOLIC ACID (UA) AND IT’S NOVEL DERIVATIVES UA-4 AND UA-7 AT CONCENTRATION OF 40 mG/ML. TROLOX EQUIVALENT ANTIOXIDANT CAPACITY (TEAC) OF UA AND DERIVATIVES (CONC. 40 mG/ML) WAS ALSO STUDIED (INSERT). All values are mean ± SE of samples (in triplicate) from 3 experiments in each group (*P < 0.05, **P < 0.01).

Trolox Equivalent Antioxidant Capacity (TEAC) of UA, UA-4, and UA-7: In the TEAC assay, UA, UA-4, and UA-7 had values of 70, 110, and 120 mM trolox equivalents, respectively. TEAC is the concentration of Trolox required to give the same antioxidant capacity as 1 mM test substance. The order of antioxidative potency of the UA and derivatives showed that UA-7 is more effective antioxidant than UA-4. Moreover, both compounds were more potent antioxidant compared to parent compound UA, as appeared in Fig. 3. TEAC assay further confirmed the higher antioxidant capacity of UA derivatives compared to the parent compound. 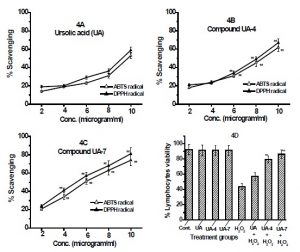 Protective Effect of UA and its derivatives Against Oxidative Stress (Hydrogen Peroxide-Induced) Induced Cell Death in Lymphocytes: Our results showed that cell death was greatly increased in hydrogen peroxide exposed lymphocytes (43.6 ± 3.9). Simultaneous treatment with UA and its derivatives significantly improved cell survival (Approx. 57% with UA; 79% with UA-4 and 86% with UA-7) when hydrogen peroxide exposure was combined with UA or its derivatives. UA-7 showed the most significant protective effect on lymphocytes (Figure 4D). Earlier studies have shown that grape seed, rich in UA prevents UV-induced keratinocyte death.

CONCLUSION: In this study, UA derivatives possessing two hydrogen-bond forming groups (an H-donor and a carbonyl group) at positions 3 and 28 exhibited significantly improved antioxidant activity.  It is evident from the present study that UA-7 offers remarkable protection against lipid peroxidation and free radical stress-induced cell death. We report that the reduction potential of UA is influenced by the presence of electron-donating or electron-withdrawing groups. The altered redox potential could affect the ability of the UA to scavenge deleterious oxy radicals. Further development of new therapeutic strategies using UA derivatives as antioxidant agent rests heavily upon the elucidation of its effect on biological reactions.

ACKNOWLEDGEMENT: The authors wish to thank Dr. Gadge, Principal, Sterling Institute of Pharmacy, for his guidance and support in carrying out this work.