A simple and sensitive extractive spectrophotometric method has been described for the assay of Mianserin hydrochloride (M-HCl) either in pure form or in pharmaceutical solid dosage form. The developed method involves formation of colored chloroform extractable ion-association complex of Mianserin hydrochloride (M-HCl) with Picric acid (PA), Chlorophenol red (ClPR), Bromthymol blue (BrTB), Bromcresol purple (BrCP) reagents. The extracted complexes showed absorbance maxima at optimum wavelength using visible spectrophotometer. Beer’s law is obeyed in the concentration range of 1-42 μg/mL. Correlation coefficient was found to be ≥ 0.9985. In addition we have determined the molar absorptivity, Sandell sensitivity and the optimum conditions for quantitative analysis of the investigated drugs.

INTRODUCTION: Mianserin hydrochloride (M-HCl) is chemically known as 1, 2, 3, 4, 10, 14b- Hexahydro- 2- methyldibenzo [c, f] - pyrazino [1, 2- a]azepine hydrochloride (Fig. 1) It is used as an antidepressant medications called a tetracyclic antidepressant. This type of medicine acts on nerve cells in the brain. M-HCl (C18H20N2HCl) is works by preventing noradrenaline from being reabsorbed back into the nerve cells in the brain. It also blocks certain receptors in the brain that bind released serotonin, which helps prolong the mood lightening effect of any released noradrenaline and serotonin. In this way, mianserin hydrochloride helps relieve depression 1. Several analytical methods have been applied determine Mianserin hydrochloride (M-HCl) quantitatively in their dosage forms including spectrophotometric methods 2-4, High Performance Liquid Chromatography (HPLC) 5-7, capillary electrophoresis 8, 9 and other spectrophotometric for another drugs 10-14. 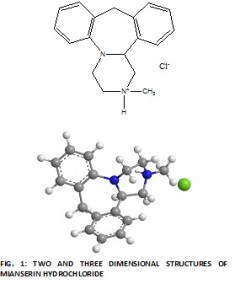 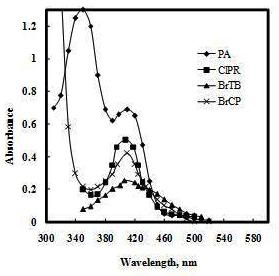 Drugs, reagents and solutions: Mianserin hydrochloride and Tolvon tablets (30 mg/tablet) were obtained through the courtesy of SEDICO Pharmaceutical Company, 6 October City, Egypt. All chemicals and reagents are of analytical grade. Chlorophenol red (ClPR), bromthymol blue (BrTB) and bromcresol purple (BrCP) are products of Merck chemical company. Picric acid (PA) is a product of Arablab chemicals while; sodium acetate trihydrate, acetic acid and anhydrous sodium sulfate are of Merck Chemical Company. The common solvents of chloroform, benzene, n-hexane, petroleum ether, toluene, cyclohexane and diethyl ether were purchased from Lab-Scan. The M-HCl drug, solvents as well as the reagents have been used as supplied without further purifications.

General procedure: Into 50 ml separating funnel, 5.0 mL (2.0x10-3 M) PA, ClPR, BrTB and BrCP were added to different volumes of solution containing (1.0x10-3 M) M-HCl. In both cases 2.0 mL of buffer solution were added and the volume was made up to 10 mL with distilled water. The formed ion–associates was extracted using a separating funnel with 10 mL chloroform by shaking for two minutes and allowed to separates into two phases. The organic layer was collected and dried with anhydrous sodium sulfate then complete to 10 ml chloroform. The absorbance of the extract was measured at the recommended wavelength (lmax) as recorded in Table 1. The blank was prepared using the same method in absence of the examined drug.

Application to various dosage forms: Four tablets (30 mg/tablet) M-HCl drug were weighed into a small dish, powdered and mixed well, then dissolved in 100 mL distilled water, a turbid solution was shaken well and filtered through a filter paper to obtain a clear solution. Then, the clear solution was diluted with distilled water in a 250 mL calibrated measuring flask. The drug content of this solution was obtained by applying the general procedure to aliquot containing different volumes of solution drugs as described above.

Stoichiometric relationship: Job’s method of continuous variation method 16 was employed; 1.0x10-3 M solution of M-HCl drugs was mixed with 1.0x10-3 M solution of each selected reagent. A series of solutions were prepared in which the total volume of drug and reagent was kept constant (5.0 mL). The reagents were mixed with each drug in various proportions along with the chosen buffer solution, which then diluted in 10.0 mL calibrated flask with the appropriate solvent following the above mentioned procedures.

RESULTS AND DISCUSSION: Several parameters such as reagent concentration, sequence of addition, effect of extracting solvent, effect of pH, effect of time, were investigated to attain the optimum conditions to achieve high sensitivity, stability and reproducible results.

Optimization: We aimed to determine the most favorable conditions to achieve maximum color intensity of M-HCl drug. Therefore, we have investigated the effects of pH, solvent and its polarity, sequence of mixing, time and temperatures to achieve the optimum conditions to aid in accurate quantitative analysis for these drugs. The optimum wavelength(s) of maximum intensity (lmax) of M-HCl (Table 1) and their ion associates with PA, ClPR, BrTB and BrCP reagents are recorded at the choozen optimum conditions. The absorption band of M-HCl reveals lmax at 410, 408, 406 and 410 nm with PA, ClPR, BrTB and BrCP reigned and their ion–associates. It worth mentioning that, the maximum absorbencies (λmax) were recorded and tested against reagent blank (prepared in the same manner without the addition of drug) to study the influence of each of the following variables on the formed ion associates between drugs and reagents.

Effect of the extracting solvent: The solvent polarity affects both the extracting efficiency and the molar absorptivity (e) of the formed ion associates. Therefore, we have used various water immiscible organic solvents like chloroform, benzene, n-hexane, petroleum ether, toluene, cyclohexane and diethyl ether to investigate the solvent effect on the extraction of drugs against the reagents. The most convenient solvent is chloroform; it provides maximum color intensity (absorbance ~0.7) as well as powerful extraction of ion associates for M-HCl drug. Moreover, toluene and benzene could be also useful, however their maximum absorbance ~57% and 50% of chloroform for M-HCl. Other solvents n-hexane, cyclohexane, petroleum ether and diethyl ether are not recommended for M-HCl (Fig. 3) drug. 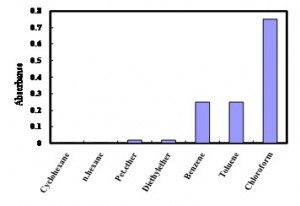 Effect of pH:  As stated earlier different stock of acetate buffer solutions were prepared with pH of 3, 4, 5 and 6 to account for the effect of pH on the formation of ion associates. Initially 5.0 mL of 2x10-3 M of reagent was mixed with 1.0 mL (5x10-4 M) of the drug solution, then 2.0 mL of Acetate buffer was added to adjust the pH followed by dilution with distilled water in 10.0 mL calibrated measuring flask. The adjusted optimum pH was found to be 5-6 for M-HCl.

Effect of mixing sequence: The optimum sequence of mixing was found to be drug, reagent, buffer, and then solvent, which allow the highest color intensity and shortest time to obtain maximum absorbance. On the other hand, other sequences rather the one given above requires more time longer time in addition to lower stability of the ion associates.

The stoichiometry of the ion- associates: The Stoichiometric ratio of the M-HCl ion–associates formed between drug of interest and the selected reagents has been determined by implementing the molar ratio method 15 and continuous variation method (16). The result indicates the existence of 1:1 at a definite λmax recorded in (Table 1).

Specificity: No interference was observed during the quantitative determination of M-HCl drug with all reagents in presence of different additives such as lactose, glycerol, propylene glycol, sugar and starch which are present in its pharmaceutical preparations. 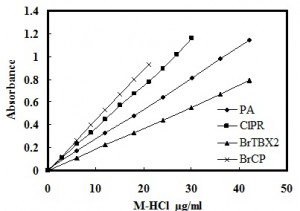 The optical characteristics; Beer’s law limits, molar absorptivities, Sandell’s sensitivities 17 are summarized in Table 1 along with the results of regression analysis using the method of least square was made for the slope (b), intercept (a) and correlation coefficient (r) obtained from different concentrations.

TABLE 2: CONCENTRATION OF MIANSERIN HYDROCHLORIDE IN µG AS DETERMINED FROM SPECTROPHOTOMETRIC METHODS

Six replicate determination at different concentration levels were carried out to test the precision and accuracy of the method. The recoveries were ranged from 99.80 to 100.78 % which reflect the high accuracy of the results, with reliable precision as indicated by very low values of standard deviation (Table 3). The performance of the proposed method was assessed by calculation of t and f tests compared with the Pharmacopoeial method 18, 19. Mean values were obtained with t and f testes at 95% confidence level for five degrees (n-1) = (6-1; i.e., six replicate minus 1) of freedom were in the accepted values.

TABLE 3: STATISTICAL TREATMENT OF DATA OBTAINED FOR MIANSERIN HYDROCHLORIDE APPLYING THE PROPOSED METHODS IN COMPARISON WITH THE PHARMACOPOEIAL METHOD

a n is the number of replicates; b Theoretical value at 95% confidence level

CONCLUSION: The proposed method made use of a simple reagent, which most ordinary analytical laboratories can afford. The method is sufficiently sensitive to permit determinations as low as 1.0 μg/mL for Mianserin hydrochloride     (M-HCl) drug at the given optimum conditions. Unlike GC and HPLC procedures, the spectrophotometer is relatively simple to handle and affordable. The proposed method is simple, precise, accurate and convenient. Hence, the proposed methods should be useful for routine quality control purposes.