ABSTRACT: An accurate and precise method was developed for Rosiglitazone Maleate in the visible range of electromagnetic spectrum sing Bromothymol Blue (BTB) in alkaline medium resulting in a blue chromogen showing its absorption maxima at 615 nm. Sandell’s sensitivity to the proposed method was found to be 1.5 × 10-4 µg/ml. The extracted complexes obey Beer–Lambert’s law in the concentration range of 1 to 30 µg/ml. The effect of the concentration of dye and pH have been studied and optimized. All the methods were validated as per ICH guidelines. The methods have been applied to the determination of drug in commercial tablets, and results of the analysis were validated statistically through recovery studies.

INTRODUCTION: Rosiglitazone [5-(4(2(methyl (pyridine-2yl) amino) ethoxy benzyl) thiazolidine2, 4 dione 1is a member of the thiazolidinedione class of drugs. It is for peroxisome proliferator-activated receptor gamma (ppar-γ) agonist 2. Literature reveals estimation of rosiglitazone by spectrophotometric methods3 and chromatographic methods 4-5 and also in plasma 6. Several UV Spectrophotometric methods have been reported for the estimation of Rosiglitazone individually as well as in combination with other drugs from pharmaceutical formulations 7. But no method has been developed for extractive estimation.

The objective of this investigation was to device a simple, precise, rapid and economical method for the estimation in bulk drug and in the tablet formulation and give the formulation in the visible range with BTB and check with effect on different dye concentrations and pH.

Experimental: U.V-Visible spectrophotometer of Jasco V-630 with 1cm matched quartz cells, was used and BTB: NaOH (1:10) ratio diluted with water, was used as a solvent for the experiment.

Bromothymol Blue Reagent: 0.1gm of BTB was weighed accurately and dissolved in 100 mL of distilled water to produce 0.1%w/v. Freshly prepared reagent solution was used throughout the analysis process.

Sodium Hydroxide: 40 gm of pure sodium hydroxide was weighed and dissolved in 100mL of distilled water to produce strength of 10N.

Preparation of standard Stock Solution: Rosiglitazone maleate 10 mg was accurately weighed and dissolved separately in 100 mL volumetric flask with distilled water so as to get the concentration of 100 µg/mL.

Calibration Curve: Aliquots of the working standard solution were prepared from the stock solution to make dilutions from 1 µg/mL to 30 µg/mL in separate volumetric flasks. To each volumetric flask 10 mL of 10N NaOH was added and shake properly. To the reacting mixture 1mL of 0.1% w/v of BTB was added and the volume was made up to the mark with distilled water. The solutions were measured at 615 nm against the reagent blank. A standard calibration curve was constructed. The sample solution was prepared in the same manner, and the amount of Rosiglitazone was determined from the regression equation. 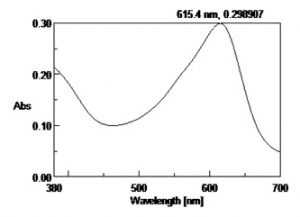 Optimization of Different Conditions: Conditions under which Rosiglitazone fulfills the essential requirements were investigated. Various conditions like wavelength maxima, the volume of NaOH and BTB were optimized.

Selection of Wavelength Showing Maximum Absorbance: The standard solution of rosiglitazone with the reagent was prepared and scanned over a range of 380 nm to 800 nm and it showed maximum absorbance at 615 nm.

Optimization for Volume of NaOH: The ion-pair complex of the drug-dye was prepared with different volumes of sodium hydroxide and the maximum absorbance was found with 10:1 ratio of NaOH: dye with drug solution

Stability of Drug-Dye Complexes: Rosiglitazone working standard solution (5 ml) was pipetted out and added to separating funnels. 10 mL NaOH and 1mL BTB reagent was added and shaken well. Volume was made up to 50 mL with distilled water and the absorbencies were measured periodically at an interval of 30, 60, 90, 120, 180, 240, 300 and 360 min at 615 nm and it was observed that drug-dye complex was stable for 6 h.

Estimation of Rosiglitazone in Tablet Dosage Form: An appropriate amount of Rosiglitazone was weighed and dissolved in water to prepare 1000 µg/mL as a stock solution. A secondary stock was a solution was prepared to a concentration of 2 µg/mL. To the solution, 10mL of 10N NaOH was added and shake properly. To the reacting mixture 1mL of 0.1% w/v of BTB was added and the volume was made up to 10mL with distilled water.

The mixture was then gently shaken until the appearance of blue color chromogen. The absorbance was measured against reagent blank at 615nm, and the concentration was determined from the Beer’s plot of the standard solution.

Accuracy: Accuracy of the proposed method was done by the recovery of Rosiglitazone Maleate by the standard addition method. A known amount of standards were spiked at 80%, 100%, 120% of previously prepared 20 µg/mL of formulation solution. Each sample was processed at the triplicate level. The amount of Rosiglitazone Maleate was estimated by applying obtained values to the regression equation.

Specificity: Pure Rosiglitazone Maleate is spiked with common excipients and was assayed by the proposed method, and it was found that the assay results were unaffected by the presence of such excipients.

Precision: The precision of the proposed methods was ascertained by actual determination of six replicates of a fixed concentration of the drug within the Beer’s range and finding out the absorbance by the proposed method in the selected drug. The results are given in Table.

RESULTS AND DISCUSSION: The absorption spectra of the reaction product (a drug with BTB in alkaline medium) showed maximum absorbance at 615nm. The blank solution in the proposed method showed negligible absorbance in that wavelength. 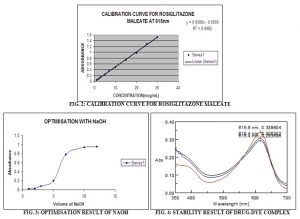 The method was optimized with sodium hydroxide and was found maximum absorbance with 10 ml NaOH with 1 ml dye reagent shown in Fig. 3. The blue color formed was found to be stable for 6hours shown in Fig. 4. Assay result confirms the accuracy of the method given in Table 2. Validation of the proposed method establishes the accuracy, recovery, precision of the method given in Table 3 and 4. All the optical characteristics are summarised in Table 1.

TABLE 4: PRECISION OF THE PROPOSED METHOD 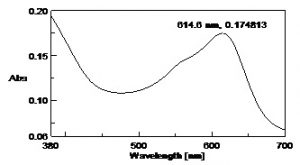 CONCLUSION: The proposed method was found to be simple, accurate and economical as compared to other established methods and can be used in routine QC analysis.