Extractive visible spectrophotometric method is described for the analysis of chloroquine in it pure forms, pharmaceutical dosage forms and biological materials. Linearity, precision, stability and accuracy were evaluated according to the recommended validation procedure. In the described method a drug complex was formed with cobalt thiocyanate reagent, buffered and extracted into nitrobenzene and absorbance determined at 625nm wavelength. Good linearity was obtained between 2µg/ml and 60µg/ml. The coefficient of variation of 5 determinations of a single sample of 2µg/ml was 1.2% and that of 0.02µg/ml was 20.3%. The mean coefficient of variation over the whole range of standard samples was 10.5+3.3% (s.d.). An assay of acceptable accuracy can be accepted down to a concentration of 0.02µg/ml. The intra- day and inter- day precision values were less than 2% for all samples analysed. The accuracy, as seen in or estimated from the percent recovery studies, was between 96 and 99% with an average of 97.75% in biological materials, common excipients and sampled tablets. Non- aqueous titration was employed as a parallel validation procedure of the described method. The volumetric determination gave good results in itself and showed good agreement with similar determination using the described method. The described method was applied to pharmaceutical formulation (chloroquine tablets) and biological materials. Statistical analysis of variance showed no significant difference between results obtained by the described method.

INTRODUCTION: Chloroquine is a 7-chloro-4-(4-diethylamino-1-methylbutylamino) quinoline or N'-(7-chloroquinolin-4-yl)-N, N-diethyl-pentane-1, 4-diamine, which is usually formulated as the phosphate, hydrochloride or sulphate (fig. 1).Chloroquine occurs as white crystals with melting-point between 86- 870C 5. Chloroquine is insoluble in water but soluble in organic solvents and mineral acids. It is a quinoline alkaloid containing three nitrogen atoms in the molecule. 4- Aminoquinoline, which chloroquine is a member, is a stronger base than the quinoline. Its enhanced basicity is readily explained in terms of resonance involving a quinoid structure occurring in the pyridine ring of the molecule 6.

A derivative of the 4- aminoquinoline with an aliphatic side chain having a diethylamino group has only two basic nitrogen; the tertiary nitrogen of the 4- aminoquinoline and the ring nitrogen 7.The tertiary nitrogen is more basic than the ring nitrogen because of the occurrence as a tertiary amino group of an aliphatic chain. Thus it accepts a proton more readily than the nitrogen atom on the pyridine part of the molecule. This basic property of the compound is used as the basis for its extraction by organic solvents from alkaline solution 8. Chloroquine base when liberated from the salt in alkaline solutions can be extracted by organic solvents 8, 9.The 4-aminoquinoline is a large molecule in the chloroquine structure, which constitutes the chromophore for light absorption. Malaria is endemic in Africa. It is a health condition that erodes man- hour when it strikes, and possibly death if untreated. It is the leading cause of mortality in children and adults in Africa. The treatment of malaria has been approached in many ways, with resistance to drug therapy leaving little to desire. Chloroquine has proved relatively reliable in the treatment of malaria despite the current paradigm shift to the expensive artemisinin combination therapy (ACT). These ACT’s are either not readily available or affordable in most rural and some semi-urban parts of Africa due to poverty of patients and the paucity of funding in the health sector.

Citrate buffer (pH 3): 90ml of 2M NaOH solution and 150ml 2M citric acid solution were mixed and diluted to 1500ml with water. The pH of the solution was checked and adjusted to the correct value by adding few drops of citric acid or NaOH accordingly.

Phosphate borate buffer (pH 7.85): 17.42g of dipotassium hydrogen phosphate was weighed out and dissolved in 100ml distilled water. 6.2g boric acid was dissolved in the dipotassium hydrogen phosphate solution and 20ml of 1.7M sodium chloride was added and made up to 1000ml with distilled water. The pH of the solution was checked and adjusted to the correct value by adding few drops of 0.1 NaOH solution.

Chloroquine solution: 0.161269g of chloroquine phosphate was weighed and dissolved in distilled water and made up to 100ml in a 100ml volumetric flask. This solution served as stock solution for the analysis of chloroquine.

Tablets: 20 tablets were weighed and finely powdered. An accurately weighed portion of the finely powdered tablets containing 100mg of chloroquine phosphate was transferred into 5ml of distilled water and diluted to 100ml with 0.1M HCl and filtered.  The filtrate was diluted appropriately as required during the course of work.

Biological materials: The biological materials (urine, plasma and red blood cells) were obtained and appropriately treated using standard procedure. A known volume of the standard reference chloroquine solution was each added and vigorously mixed and allowed to equilibrate.

Drug analysis (Reference sample and chloroquine tablets): 2ml each of the sample solution was placed in a 50ml separating funnel. 0.5ml of ammonia solution (s. g. 0.91) was added and then extracted with 10ml (x2) of diethyl ether by shaking for 2 minutes 10. The ether extract was bulked and washed with 10ml of borate buffer (pH 9.5) and the ether layer collected. Analysis of chloroquine was done by shaking 10ml of the organic layer with 10ml of 0.1M HCl for 5 minutes. Then 2ml aliquot from the 0.1M HCl extract was placed in a 50ml separating funnel. 3ml cobalt thiocyanate reagent was added. The solution was equilibrated with 10ml of nitrobenzene by shaking for 2 minutes 11. The nitrobenzene layer was clarified after separation by centrifugation at 2500 rev. min.-1 for 15 minutes. This was filtered into a 10ml flask through a nitrobenzene moistened filter paper and adjusted to 10ml with the later solvent. The absorbance of the solution was measured at 625nm against a blank (2ml of 0.1M HCl instead of the 2ml aliquot from the 0.1M HCl extract). The level of chloroquine was calculated from the calibration curve prepared in the same manner.

Drug analysis (in common excipients): Here 1ml each of the standard reference chloroquine solution was introduced into 4ml of the solution of the excipients and assayed using the method described above.

Method validation: In addition to evaluating linearity, precision, stability of complex formed and accuracy using recommended validation procedure 1, 2, 3, 4; a parallel validation was carried out by doing similar determination using non- aqueous titration. This gave good results in itself and showed good agreement with the results of similar determinations obtained from the described method.

Development of method: In the development of the method for chloroquine a chloroquine- cobalt complex, which can absorb in the visible region, was formed. The wavelength of maximum absorption was determined and used for subsequent absorbance readings. A number of preliminary experiments performed established optimum conditions necessary for rapid and quantitative formation of the colored complex to ascertain or achieve sensitivity and reasonable stability. The maximum color development of the chloroquine cobalt complex was completed immediately all the reagents were added. The relevance of the method lies in the chemical reactions upon which the procedure is based, not on the sophistication of the instrument. A calibration curve which obeyed the Beer- Lambert’s law was obtained. A standard curve was plotted for 1, 5, 10, 20, 40 and 50µg/ml of chloroquine and this gave a straight-line graph (figure 2). The coefficient of variation of 5 determinations of a single sample of 2µg/ml was 1.2% and that of 0.02µg/ml was 20.3%. The mean coefficient of variation over the whole range of standard samples was 10.5±3.3%. An assay of acceptable accuracy can be accepted down to a concentration of 0.02µg/ml. 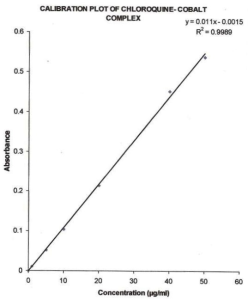 The developed method was used to determine the percentage recoveries of chloroquine in urine, plasma and red blood cells, in order to estimate the precision of the method developed.  A good recovery values were obtained, with an average recovery of 97.3% (table 1).

CONCLUSION: The described method, which has been treated to the recommended procedures for validation and which showed good statistical and analytical results, is recommended for use in the routine analysis of chloroquine.