It is well known that drug efficacy can be severely limited by poor aqueous solubility, leading to low dissolution rate and thus results in low absorption in the gastrointestinal tract after oral administration hence comprising oral bioavaibility. The ability to increase aqueous solubility is thus a valuable aid to increase the efficacy for certain drugs.

For class II drugs dissolution /solubility and for Class III drug permeability limits the oral drug absorption. It is obvious that class II drugs the low ability to dissolve is a more important limitation to their overall rate and extent of absorption than their ability to permeate through the intestinal epithelia. There are several pharmaceutical strategies available to improve the aqueous solubility of poorly soluble drugs: solid dispersion, solubilization using surfactant, the use of co-solvent, reduction of particle size, hydrotropy and the use of aqueous soluble derivatives or salts. Among all technique microemulsion system has considerable potential to act as a drug delivery vehicle by incorporating a wide range of drug molecules. Microemulsion has got advantage like excellent thermodynamic stability, high drug solubilisation capacity, improved oral bioavailability and protection against enzymatic hydrolysis.

Solid microemulsion technique are developing to modify the physicochemical and biopharmaceutical properties of drug, for above mentioned techniques BCS Class II drugs are selected because low solubility and high permeability like antidiabetic drugs. Antidiabetic drugs to be absorbed must be present in the form of an aqueous solution at the site of absorption for their hypoglycemic activity so solubility enhancement technique s are more essential for drugs like Glimepiride (GMP) 3-ethyl-4 – methyl – N - {2  -[4  -({[(4methylcyclohexyl) carbamoyl] amino} sulfonyl) phenyl] ethyl, is thiozolidinedione antidiabetic agent that depends on the presence of insulin for its mechanism of action lowering blood glucose appears to be dependent on stimulating the release of insulin from functioning pancreatic beta cell.

Glimepiride (GMP) is classified under class II according to biopharmaceutical classification system. The drug shows low, pH dependent solubility. In aqueous media, glimepiride exhibits very poor solubility at 37˚C (<0.004 mg/ml). In media pH>7, solubility of drug is slightly increased. This poor solubility may cause poor dissolution and unpredicted bioavailability. It is practically insoluble in water and other aqueous media. However, the drawback of this potentially useful hypoglycemic agent is that it is highly hydrophobic and practically insoluble in water. The presented research work thus deals with the techniques of enhancement of solubility as well as dissolution and bioavaibility of poorly aqueous soluble drugs like Glimepiride.

The solubility of Glimepiride in various oils (Oleic Acid, Capryol® 90, Capmul® MCM, Castor oil, olive oil, Captex® 200,), surfactants (Cremophor® EL, Cremophor® RH40, Tween 80), and co-surfactants (, PEG, Ethanol, Transcutol® P) was determined by adding excess amount of GLP to 2 ml of each component placed in screw capped glass vial. The ingredients were mixed using a magnetic stirrer and then kept on orbital shaker (Remi motors & RIS-24BL) for 72 h at temperature 37±1.00C. The samples were then centrifuged for 5 min at 37°C. The supernatant was pipette out, diluted with methanol and analysed by UV spectrophotometer (Shimadzu, Japan) at 229 nm for determining drug concentration. The results are shown in Tables 1-3.

Pseudo-ternary phase diagrams were constructed to obtain the suitable components, and their concentration ranges that resulted in a large existence area of microemulsion were preferred. In order to optimize the concentration of oil phase, surfactant and co-surfactant, different batches of varied concentration were prepared and titrated with distilled water till transparency persisted. 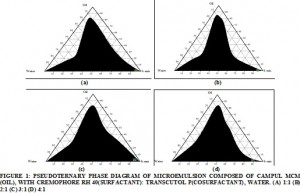 The droplets of the microemulsions being smaller than ¼ th the wavelength of visible light, permit white light to pass through the dispersed system making it transparent or translucent. The microemulsion systems were inspected for optical transparency and homogeneity by usual observation against strong light. The system was also checked for the presence of undissolved drug or other solid ingredient. The results are shown in Table 5.

Physical stability of the microemulsions was studied by centrifugation at 3,000 rpm for 2 hours. After centrifugation the samples were observed for clarity and any phase separation or precipitation. The results are shown in Table 5.

The pH measurement of the microemulsions were determined by using a pH meter which was calibrated before use with standard buffer solutions at pH 4 and 7. The results are shown in Table 5.

The refractive index of medicated formulation was determined using an Abbetype refractometer. The results are shown in Table 5.

The viscosity of the prepared microemulsions was measured using Brookfield viscometer using spindle No. S 64, at 100 rpm.  Experiments were carried out in triplicate for each sample, and the results are presented as an average ± standard deviation in Table 5.

The microemulsion formulation was analyzed for drug content by U.V. spectrophotometer at 229 nm.

Mean globule size of the optimized microemulsion was determined by photon cross-correlation spectroscopy. Microemulsion was placed in transparent polystyrene cuvette (path length = 1 cm) which was placed in thermostatic sample chamber maintained at 25°C. Sample temperature was set at 25°C and 3 runs of   60s were performed. Detection was carried out at a scattering angle of 90°.  From the resulting correlation curves, a 2nd order analysis was performed to calculate the mean globule size and standard deviation. The results are represented in Figure 2.

The fixed funnel and free standing cone method was employed. A funnel that is secured with its tip at a given height, h, which was kept 2 cm above graph paper that is placed on a flat horizontal surface. With r being the radius, of base of conical pile, angle of repose can be determined by following equation:

Where, Ѳ is the angle of repose,

h is height of pile, r is radius of base of the pile.

The solid microemulsion was introduced into the 10 ml graduated cylinder. The volume occupied by the SME was recorded. Bulk density was calculated using following formula:

Bulk density = Mass of powder/Bulk volume, It is calculated in g/ml.

Solid microemulsion (2 gm) was poured through a glass funnel into 10 ml of graduated cylinder. The cylinder was tapped gently from the height of 2 inches until a constant weight was obtained. The volume occupied by the solid microemulsion after tabooing was recorded and tapped density was calculated using following formula:

Carr’s index can be determined by the following equation,

Hausner’s ratio can be determined by the following equation,

The drug content was calculated by dissolving solid microemulsion equivalent to 1 mg of Glimepiride was transferred to 100 ml volumetric flask and dissolved in minimum amount of methanol; and the volume was made up to 100 ml with phosphate buffer (pH 7.4) and then b solution was filter through 0.45-μm membrane filter paper and assayed for drug content using UV spectrophotometer at 229 nm.

Accurately weighed solid microemulsion equivalent to 1 mg of Glimepiride were added to 900 ml of dissolution media (phosphate buffer 7.4) contained in USP dissolution apparatus II and stirred at a speed of 50 rpm at 37±0.5˚C. Five milliliter aliquots were withdrawn at 10, 20, 30, 40, 50 60 minute and replaced by 5 ml of fresh dissolution media (37˚C). The collected samples were analyzed after suitable dilution at 229.0 nm using UV-visible spectrophotometer against the blank. The dissolution of pure Glimepiride was done similarly. The results are shown in Figure 3.

To assess the stability of drug and formulation, stability studies were done as per ICH guidelines. The formulated solid microemulsion were wrapped in aluminium foil and stored at and 45 ± 0.5ºC for period of one month. After an interval of 15 days the solid microemulsion were tested for physical appearance, angle of repose, bulk density, tapped density, carr’s index, hausner’s ratio, drug content uniformity. The results are shown in Table 8.

All the microemulsions were transparent and appeared like a homogenous single-phase liquid, when observed for visual clarity against strong light. No traces of undissolved drug or other solid ingredient were found in all the formulations. This indicated that the drug was completely soluble in the system.

None of the microemulsion systems showed signs of phase separation on centrifugation at 3000 rpm for 2 hours. This result provided a rapid and full proof identification of the system as microemulsion.

The release of Glimepiride from solid microemulsion prepared from aerosil 200 (91.37%) was found to be higher than the pure drug (56.534%). This may be due to the fact that in the microemulsion system, the solubility of Glimepiride might have increased. Further, the SME released the drug in a fast or manner as compared to pure drug.

The result of stability studies shown that there were no significant changes in the angle of repose, bulk density, tapped density, Hausner’s ratio, Carr’s index, drug content of solid microemulson after storing at a  temperature of 40ºC ± 2ºC / 75% ± 5%  relative humidity for one months. These results indicated that drug remain stable after incorporating in the solid microemulsion containing aerosol 200 as adsorbent.

CONCLUSION: The results of the present work concludes that the antidiabetic drug Glimepiride, which suffers from the poor water solubility issue can be successfully formulated into a solid microemulsion for oral delivery which will improve the solubility and the bioavailability.