ABSTRACT: Cefixime is more effective in treating multi drug resistant typhoid fever but the major limitation was its poor bioavailability with short half- life. The present investigation was attempted to develop a natural polymer based nanoparticles containing cefixime using gum kondagogu and chitosan as polymers for customising the drug release profile to achieve an effective therapeutic concentration by increasing its solubility and bioavailability. The cefixime nanoparticles were prepared by the modified coacervation method and evaluated for particle size, zeta potential, morphological studies (SEM, TEM and AFM), entrapment efficiency, in-vitro drug release studies and in-vitro antimicrobial efficiency studies. The prepared drug nanoparticles found to be average mean particle size in range from 80.6±3.5 to 230.6±7.3nm and entrapment efficiency was found to be 78.0±1.5 to 93.2±2.5%. The in-vitro drug release showed a biphasic pattern with initial burst release followed by sustained drug release up to 32h. The MIC50 of prepared formulation was one fold lesser than pure cefixime for Salmonella Typhi isolates. The disc agar diffusion (DAD) test confers that the zone of inhibition was found to be better for the formulation against pure cefixime. In conclusion, the developed Cefixime nanoparticles support to customise the drug release profile and better zone of inhibition with minimum concentration which provoke better patient compliance

INTRODUCTION: Typhoid fever is a life-threatening illness caused by the bacterium Salmonella Typhi, usually through the consumption of contaminated food or water. According to World Health Organisation, approximately 21 million cases and 2, 22,000 typhoid deaths were found to be reported annually throughout the world. Flouroquinolones are the drug of choice for the management of typhoid fever but unfortunately, they are contraindicated in paediatric patients and pregnant women due to its damage to the articular cartilage.

Cefixime, oral third generation cephalosporin antibiotic was reported to be more effective in treating Multi Drug Resistant (MDR) typhoid fever particularly in children from endemic areas but the major limitation with cefixime was its poor solubility in biological fluids and thus leading to poor bioavailability (40-50%) and with a half-life of 2-3 h. Therefore, it leads to the administration of 200mg twice daily for 7-14 days. Improper dosage regime may leads to the development of antibiotic resistance. To overcome, the limitations associated with current dosage regimen a novel drug delivery approach is necessary 1.

Nanotechnology has emerged as a promising approach for the treatment of enteric infectious diseases by targeting and sustaining the drug release inside the targeted cells 2. Additionally nanotechnology offers the advantage of enhancing drug solubility and bioavailability of the poor soluble drugs and thus leading to reduced dosage of drug, side effects and cost with enhanced therapeutic efficacy and will provoke better patient compliance 3.

In recent years, bio-degradable polymeric nanoparticles have attracted considerable attention as potential drug delivery devices due to their applications in drug targeting to particular organs/tissues as carriers 4. Gums and mucilage are extensively used natural materials for conventional and novel dosage forms. These natural polymers have benefits over synthetic polymers, as they are stable chemically, biocompatible, less toxic, economical, biodegradable, and easily available 5-7.

Gum kondagogu (GK) is an exudate tree gum from the tree (Cochlospermum gossypium DC.) belonging to family Bixacea. The most important sugars were found to be neutral sugars (arabinose, mannose, rhamnose, galactose, α-D-glucose, β-D-glucose) and uronic acids (D-glucoronic acid and β-D-galacturonic acid). It can be used as suspending agents and matrix formers for controlled drug delivery due to its gelling property 8. Chitosan is the cationic deacetylated form of chitin obtained from exoskeletons of marine arthropods 9, 10.

Chitosan gained interest in nanoparticulate oral delivery vehicle because it is able to reduce the trans epithelial resistance and opening the tight conjunction between epithelial cells and due to its good mucoadhesive property it has been used as a carrier for sustained drug delivery but the major limitation of chitosan is restricted by its faster dissolution in stomach and its limited capacity for controlled drug release 11, 12. To overcome the limitations associated with chitosan poly electrolyte complexes are formed by interactions between molecules that carry oppositely changed ionisable groups and also avoid the use of crosslinking agents, stabilizers and organic solvents 13.

The study was aimed to develop and to evaluate a natural polymer based cefixime nanoparticles prepared using chitosan and gum kondagogu as matrix formers to customise the drug release profile and better zone of inhibition with minimum concentration for improving the patient compliance followed by the declining the limitations associated with conventional dosage forms.

Cefixime was obtained as a gift sample from Kniss laboratories Pvt. Ltd, Chennai, India. Gum kondagogu (grade-1) was procured from Girijan Co-operative Corp Ltd, Hyderabad, India. Chitosan was procured from Sigma-Aldrich Chemical Co. Ltd. All other chemicals used were of analytical grade and double distilled water was used throughout the experiments.

Deacetylated gum kondagogu was prepared as per earlier reported method 15. The deacetylation was monitored by FT-IR spectroscopy.

The FT-IR spectrum of deacetylated gum was recorded on FT-IR spectrophotometer. The sample were mixed with KBr in ratio of (1:4) and pressed into pellets under mechanical pressure using hydraulic press. The scans were obtained with a spectral resolution of 2cm-1 from wave number 4000 to 200 cm-1 16. The GC-MS analysis was carried out using HP-5 conventional capillary column (30m x 0.25mm with internal diameter of 0.25µm) coupled to ion trap mass spectrometry functioned at 70ev. The columns were automated from 50 to 250 0C at 500C/min 17. For characterization of crystallinity, X-ray diffraction patterns of gum were carried out using Schimadzu, XRD 6000 equipment, with nickel filtered tube CuKα1 at a voltage of 45 kV and current of 45 mA, The scanned angle was set at 2Ɵ from 5º to 90º and scanned rate was 1º/min 18.

FT-IR, XRD and proton NMR studies were carried out to determine the possible interaction between the drug and excipients used. FT-IR and XRD analysis were carried out as reported earlier. The proton NMR spectrum of deacetylated gum was recorded in an NMR spectroscopy (varian, UNITY-400, Switzerland). 100 mg of sample was dissolved in D2O and chemical shifts were reported in ppm relative to an internal standard TMS (tetramethylsilane) for 1H NMR. The proton NMR spectrum was obtained at a base frequency of 400MHz and with 16 transitions at a delay time 2 seconds.  The chemical shifts were expressed in δ (ppm) relative to the resonance of internal TMS. The existence of an interaction is detected by the alteration, shift or disappearance of a characteristic peak of the drug

The morphology of nanoparticles was studied using a scanning electron microscope (Hitachi S 3000H, Japan).  The sample was fixed to the plate surface with double-sided adhesive tape and sputtered coated with gold as the samples were non-conducting and surface morphological features were observed.

Transmission electron microscopy (TEM) was used to study the surface morphology of nanoparticles. A small aliquot of nanoparticles suspension were dropped onto formvar-coated copper grids and dried in hot air oven for 45 min then the samples were stained using 2% w/v phosphotungstic acid at room temperature. The picture was captured using Digital Micrograph and soft imaging viewer software (Olympus, Germany) was used for capturing and analysis 21.

The morphological characteristics of cefixime nanoparticles were observed using Atomic Force Microscopy (AFM). The small quantity of sample was dissolved suitably in Isopropyl alcohol was deposited on a glass slide and dried overnight to form a thin film and was analysed by AFM (NT-MDT).

In-vitro drug release studies for the nanoparticles were performed using diffusion bag technique. The cefixime nanoparticles (equivalent to 10mg) dispersed in 5ml of dissolution medium was placed in a dialysis bag (MWCO: 12–14 kDa, surface area of 22.5 cm2)  immersed in USP Apparatus I with a dissolution medium (300ml) of 0.1 M potassium phosphate buffer of pH 7.4 stirred at 37 ±2°C maintained at 100 rpm 25. 1ml of sample was withdrawn at regular intervals of time and an equal volume of buffer solution was added to maintain the constant volume of dissolution medium. The amount of drug released was measured spectrophotometrically using UV at 287nm. All measurements were performed in triplicate (n=3) and SD was calculated 26.

Stock cultures of Salmonella Typhi were kept at 4°c on slant. The active cultures required for the experiment were prepared by transferring a loop full of culture from the stock cultures to test tubes containing nutrient broth and incubated for 24 h at 37ºc.

The antibiotic-resistant profile of sample was determined by disc diffusion method to determine the zone of inhibition. The study was carried out on Muller Hinton agar (MHA) medium prepared by weighing 3.8 g and dissolved in 100ml of distilled water to this 1gm of agar was added and kept for sterilization. After sterilization the MHA media was poured in to sterile petriplates and were allowed to solidify for thirty minutes. Then the inoculums were spread on to the solid plates with sterile swab moistened with the bacterial suspension.  Add 20 µl of sample serially diluted to a concentration of 62.5 µg, 125 µg, 250 µg, 500 µg and 1000 µg/disc placed on MHA plates. These plates were incubated for 24 h at 37ºc .Then the activity was determined by measuring the diameter of zone of inhibition 29.

5 ml sterilized nutrient broth was taken in each tube. To this 100 µl of culture was added and then 100 µl of different concentration of samples was added. OD was measured at 620 nm 30.

The FT-IR spectra indicates the presence of broad band  in the FT-IR of gum at 3419.26 cm-1 indicates the N-H (amide) stretching mode and O-H (hydroxyl) groups, the characteristic peak at 1080.47 and 2923.85 cm-1 corresponds to C-O as well as C-H stretching band, the characteristic absorption peak at 1605.46 cm-1 corresponds to C-O stretching and N-H bending vibrations, the peak at 1030 cm-1 represents stretching mode of carboxylic acid of D-glucoronic acid, the bands at 707.76 and 538.12 cm-1 indicated the N-H wagging vibrations. The absence of peaks at 1736 cm-1 and 1227 cm-1 were attributed to acetyl groups which were absent in deacetylated gum (Fig. 1). 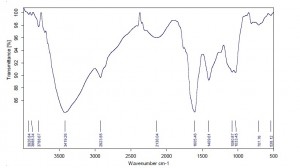 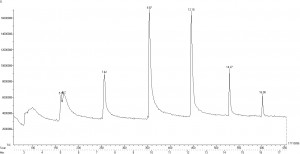 FIG. 2: GC-MS ANALYSIS OF ACID BASE HYDROLYSED FRACTION OF GUM

From XRD pattern no characteristic peaks were observed indicates that the gum was found to be in amorphous form (Fig. 3). 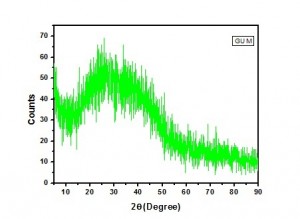 The X-ray diffraction pattern of drug and the formulation were carried out. The pure drug confers crystalline nature with sharp peak between 7.96o [o2Th.] to 26.37 [o2Th.]  a characteristic of cefixime that represent the crystalline nature of the drug, the same diffraction was also observed in the prepared formulation with decreased intensity of signal indicating no signs of incompatibility between the pure drug and formulation components (Fig. 5). 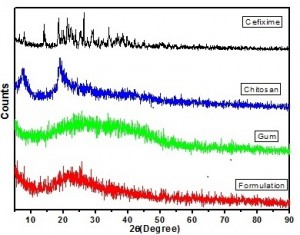 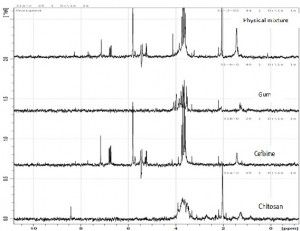 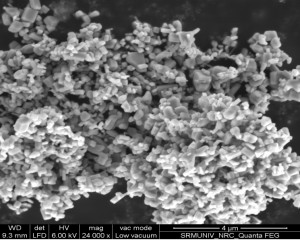 TABLE 2: CHARACTERIZATION OF FORMULATIONS FOR % ENTRAPMENT EFFICIENCY AND % DRUG CONTENT*

From in-vitro drug release study by bag diffusion technique showed a biphasic pattern with initial burst release followed by sustained release of drug up to 32h. The F2 showed sustained drug release compared to other formulations. The amount of drug release was decreased with increase in polymer concentration due to increase in the thickness of the polymeric membrane which decreases the diffusion of drug through it (Fig. 10). 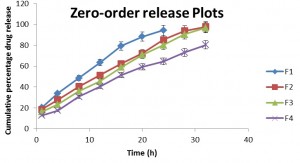 The results obtained from the data was extrapolated by using different kinetic models revealed that the zero order plots were linear for all the formulations and first order plots were not linear for all the formulations (Table 3). Based on the highest regression coefficient value (r2) the best fit model for all formulations was found to be Higuchi model (r2: 0.97-0.98). The release of drug from the polymer matrix containing hydrophilic polymers involves diffusion. To confirm the diffusion mechanism the data was fitted into Koresmeyer-Peppa’s equation, as ‘n’ values indicates between 0.5-1, the mechanism of drug release was found to follow anomalous non-fickian diffusion i.e. the increased diffusivity of drug from the matrix by solvent-induced relaxation of the polymers.

The antibiotic-resistant profile, as determined by the Disc Agar Diffusion technique reveals that the diameter of zone of inhibition of pure drug and prepared formulation (F2) was found to be 9mm and 14 mm at 125µg/disc which confers that the prepared formulation was found to be exhibiting better zone of inhibition against the pure drug solution. Thus by customising the drug release profile of the cefixime nanoparticles, effective therapeutic concentration was achieved which may overcome the limitations associated with conventional drug delivery systems (Fig. 11).