ABSTRACT: Usnic acid is lichen metabolite. Lichen species are the source of usnic acid. It has Antitumor and Anti-proliferation activity. Usnic acid is poorly water soluble drug. So its dissolution and bioavailability is poor. To enhance dissolution and bioavailability of usnic acid nanotechnology has been adopted. So in this study usnic acid powder was formulated as a nanoparticle with the help of PLGA polymer. Nano-precipitation with sonication method was adopted to formulate usnic acid loaded nanoparticles. Obtained nanoparticles were undergone to characterization and evaluation studies. SEM study revealed that particles are in the range of nanometer level and it is in spherical shape. FTIR and DSC studies have shown that no interaction between drug and polymer. In vitro drug release was maximum for optimized formulation. Optimized formulation also exhibited more antitumor activity than free usnic acid. Kinetic study revealed that the drug release is zero order. It concludes nano-precipitation with sonication is effective method for preparation of usnic acid loaded nanoparticles.

INTRODUCTION: Usnic acid (2, 6 - diacetyl -7, 9-dihydroxy-8, 9h-dimethyl-1, 3(2H, 9Bh)-dibenzo-furandione) is a liche n metabolite 1, 2. Usnic acid is a yellow pigment and occurs in two enantiomeric form is found in lichens 3, 4, 5. Most of literature survey has shown usnic acid exhibit antitumour and anti-proliferation activity. Kumar and muller  has found out  usnic acid has  cytotoxic activity against human keratinocyte cell culture 6 and lot of researches have been carried out study on usnic acid to reveal the cytotoxic activity 7.

In addition to the antitumour activity, usnic acid has been shown to exhibit antiviral, antiprotozoal, antimicrobial, anti-inflammatory and analgesic activities 8, 9, 10. Since usnic acid has hydrophobic nature it has poor dissolution. Nanopaticles are good platform to increase solubility and bioavailability of hydrophobic drug 11. So nanotechnology was adopted to bring up the good dissolution and better bi-availability.

Nanoparticles are referred as nanosized colloidal particle ranging in size from 10 - 1000 nm in which drug is encapsulated by polymers. These small size nanoparticles can be easily absorbed into RES and other system of body 12. Among various types of nanomaterials, polymeric nanoparticles have the advantages of relatively high biocompatibility, stability, and flexibility of conjugating ligands on their surface for targeted drug delivery 13, 14.

The objective of this current project was to develop the usnic acid loaded nanoparticles with PLGA polymer and evaluate physico chemical and pharmacological activities.

Method of Preparation: All batches of formulations were prepared by nano precipitation method by sonication method 15, 16. The drug and polymer as mentioned in the Table 1 were dissolved in acetone (6 ml) and chloroform (4ml) respectively 0.4 ml of Tween 80 was added into drug solution and then organic phases were mixed by using vortex mixer. The organic phase was added dropwise (0.5ml/min) into aqueous phase (10 ml phosphate buffer of pH 7.4) containing 0.06 g PEG. Then it was sonicated using probe sonicator and the organic phase was removed by evaporation under reduced pressure.

Morphology: The usnic acid loaded nanoparticles were subjected to scanning Electron Microscope (SEM) for determining its size and shape. The nanoparticle size and shape were to be characterized and photographed 17.

FTIR Study: The spectra of the samples were recorded using an IR spectrophotometer. KBr pellets were prepared by gently mixing sample with KBr. Fourier transform infrared spectrum were recorded in the range of 400 - 4000 cm-1.

Differential Scanning Calorimetry (DSC) Analysis: DSC experiments were carried out to determine the possible interactions between drug and polymers. Therefore in the present study DSC analysis were carried out on samples of pure drug and formulated nanoparticles 18, 19. Weighed quantity of pure drug and formulation were taken in aluminum pans. The pans were sealed with aluminum caps. The samples were heated at 20 °C/min up to 300 °C. The location of the thermal transition and surface area of the peaks were obtained from the thermo grams.

Entrapment Efficiency: 20, 21 The nanosuspension with known amount of drug incorporated was centrifuged at 15,000 rpm for 15 minutes. The supernatant was separated and 1ml of supernatant was suitably diluted with phosphate buffer (pH 7.4) and the absorbance was measured spectro-photomertically at 290 nm. The drug entrapment efficiency was calculated by the following equation.

By UV Spectrophotomertic Method: 22 The in vitro drug release studies were performed using the dialysis bag diffusion technique. The release studies of usnic acid from nanoparticles were performed in phosphate buffer (pH 7.4). Total quantity of prepared formulations ware placed in a cellulose dialysis bag and tied at both ends. The dialysis bag was immersed in the receptor compartment containing 50 ml of phosphate buffer (pH 7.4) at 37 °C under magnetic stirring. An aliquot of receptor media (1ml) was withdrawn at regular intervals upto 24hr and the same volume was replaced by fresh dissolution medium (phosphate buffer pH 7.4) and analyzed spectro-photomertically at 290 mm. The percentage of drug released at various time intervals was calculated from calibration curve.

In vitro Drug Release for the Optimized Formulation (G2S) by HPLC Method: 23

Procedure: The total quantity of optimized formulation was placed in the dialysis bag and bag immersed in the receptor compartment containing 50 ml phosphate buffer (pH 7.4) at 37 °C under magnetic stirring. The samples were withdrawn at the time intervals of 6, 12, 18 and 24 hrs with replacement of equal volume of dissolution medium. The withdrawn samples were filtered using sartorious membrance filter (0.45µ).

Sample Analysis: The filtered samples were suitably diluted and analyzed by HPLC method using Kromosil C8 column (250 x 4.6 mm internal diameter 5µm particle size) and a mobile phase composed of methanol / 20 mM phosphate buffer solution pH 7.4 (70:30 v/v). Sample aliquots (20µl) were injected and eluted with the mobile phase at a flow rate of 1ml/min. The usnic acid peak was verified at a wavelength of 280 nm. The amount of drug released at various time intervals was determined from the standard calibration curve.

Cytotoxic Evaluation of Usnic Acid and Usnic Acid Loaded Nanoparticles: In this present study usnic acid isolated from lichens and usnic acid loaded nanoparticles were evaluated for their cytotoxic activity 24, 25.

Induction of Cancer using DAL: Dalton’s Ascites Lymphoma (DAL) was supplied by Amla cancer research center, Trissur, Kerala, India. The cells were maintained in vivo in swiss albino mice by intraperitoneal transplantation. While transforming the tumour cells to the grouped animal the DAL cells were aspirate from peritoneal cavity of the mice using saline.

The cell count was done and further dilutions were made, So that total cells should be 1x 106 cells/ml/mouse. This volume was given intraperitoneally and the tumour was allowed to grow in the mice for minimum of seven days before starting the study.

Treatment Protocol: Swiss albino mice were divided into 5 group of six each. The animal belonging to groups 2 - 5 were injected with DLA cells (1 x 106 cells/ml/mouse). Intraperitoneally, While the remaining group 1 served as the normal control group. After the inoculation, the groups were treated with compounds as given below.

Cancer Cell Count: The fluid (0.1 ml) from the peritoneal cavity of each mouse was withdrawn by sterile syringe and diluted with 0.8 ml of  ice cold  normal saline or sterile Phosphate Buffer Solution (PBS) and 0.1 ml of tryphan blue (0.1 mg/ml) and total number of  the living cells were counted using heamocytometer.

Body Weight: All the mice were weighed, from the day 1 to day 15 of the study. Average increase in body weight on the 15th day was determined.

Percentage Increase in Life Span (ILS): % ILS was calculated by the following formula:

Preparation of Nanoparticles: Usnic acid loaded nanoparticles were prepared by nano-precipitation method with sonication technique using bio-degradable polymers namely PLGA. This method was based on the interfacial deposition of polymer followed by diffusion of a semi-polar and miscible solvent in the aqueous medium in the presence of surfactant. Usnic acid is hydrophobic drug and for this type of drug nanoprecipitation method is ideal method for preparing nanoparticles 26, 27. 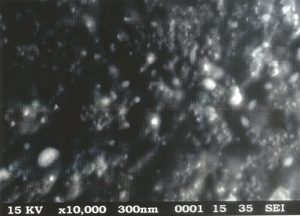 Morphology: The morphology of nanoparticles was examined by SEM. SEM images revealed that all the nanoparticles prepared displayed good morphology with spherical structure and smooth surface. Average size of optimized nanoparticle range is 200 nm to 300 nm respectively 28. 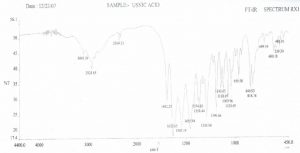 It confirmed that usnic acid could be in an amorphous or solid - solution state in the polymer matrix 29. Thermograms of drug - polymer loaded nanoparticles showed that there was no melting peak of polymer (PLGA) observed and it confirmed that polymer also in amorphous state 30. Hence DSC analysis results revealed that there was only physical interaction between drug and polymer, but there is no change in therapeutic action of drug. 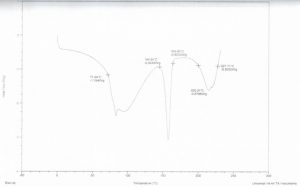 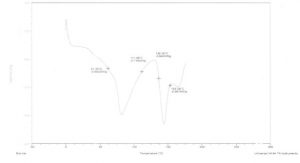 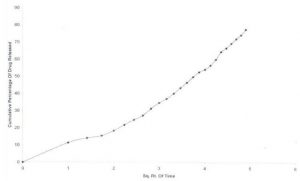 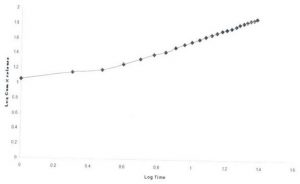 All values were expressed as Mean ± SEM

Values were find out by using ONE WAY ANOVA. Followed by Newman keul’s multiple range test.

Values are expressed as Mean ± SEM

Values were found out by using ONE WAY ANOVA. Followed by Newman keul’s multiple range test. 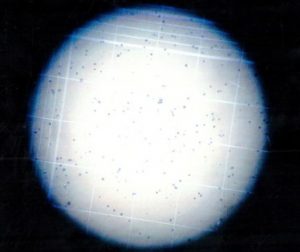 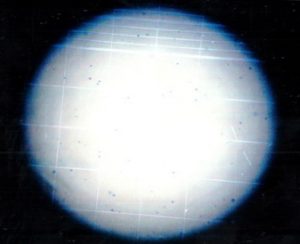 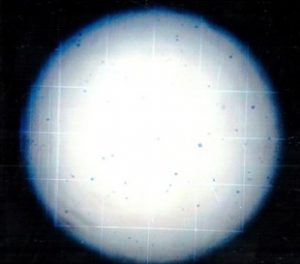 ACKNOWLEDGEMENT: We thank to K. M. College of Pharmacy to provide all the facilities for this research.

CONFLICT OF INTEREST: The authors have no conflict of interest to declare.