Celecoxib is a selective cox-2 inhibitor is indicated to the treatment of Osteoarthritis, Rheumatoid arthritis, acute painful primary Dysmenorrhoea. It is also superior to other NSAID’s, due to lower incidences of symptomatic gastrointestinal ulcer complications than other NSAID’s. Celecoxib is practically insoluble in water. The present investigation deals with enhancement of dissolution rate of Celecoxib using Mannitol as carrier with different techniques like physical mixtures, kneading method and solvent evaporation method. The dispersions were evaluated for drug content uniformity, dissolution rate study, T50, DE20, ANOVA. The FTIR & DSC were used to characterize solid state of solid dispersions. A marked increased in the dissolution rate was observed with all solid dispersions, among that Celecoxib : Mannitol (1:4) KM. Showed maximum drug release which was selected for formulation of tablets and evaluated for drug release characteristics. The promising formulation (F2) was then compared with existing marketed product, the release profiles was studied in water containing 2 % SLS. The release study showed that these are fast release formulations of Celecoxib. So it is clearly evident that F2 and marketed product are greater than the pure drug .F2 subjected to stability studies the formulation was found to be stable for 4 weeks at 400c, with insignificant change in the hardness, disintegration time and in-vitro drug release pattern.

INTRODUCTION: Celecoxib is a NSAID, which exhibits potent anti inflammatory and analgesic action by inhibiting prostaglandin synthesis by specifically inhibiting the COX-2 enzyme. It exhibits anti-inflammatory, analgesic and antipyretic action; it is mainly used for Osteoarthritis, Rheumatoid arthritis, and acute painful conditions, primary Dysmenorrhoea and Ankylosing spondylitis 1. Celecoxib is preferred over conventional NSAIDs, as the latter may lead to serious gastrointestinal complications like ulcer, severe bleeding and perforation, resulting in hospitalization and even death. The rate and extent of dissolution of the drug from any solid dosage form, determines the rate and extent of absorption of drug. In case of poorly soluble drugs dissolution is the rate limiting step in the process of drug absorption Potential Bioavailability problems are prevalent with extremely hydrophobic drugs (aqueous solubility less than 0.1mg/ml at 370C) due to erratic (or) incomplete absorption from G.I.T.

The solid dispersion approach has been widely and successfully applied to improve the solubility, dissolution rate and consequently the bioavailability of poorly soluble drugs 2-4.  A number of drugs have been shown to improve their dissolution character when converted to solid dispersions. Aceclofenac 5, Sulphamethoxazole 6, Nifedipine 7, Glyburide 8, Melaxicam 9, Valdecoxib 10, Rofecoxib 11.  Various hydrophilic carriers, such as PEG 12, PVP 13, HPMC14, Gums 15, Sugars 16, Mannitol 17, Urea 18, have been investigated for improving the dissolution rate and bioavailability of poorly aqueous soluble drugs. In the present work, solid dispersion of Celecoxib with Mannitol 19, prepared in different Drug: carrier ratios (1:1, 1:2, 1:4, 1:6) with different techniques like physical mixture (PM), kneading method (KM), solvent evaporation method (SE) to improve solubility and dissolution characteristics U V Spectrophotometric was selected for assay as well as in-vitro dissolution study at 254nm in water containing 2% SLS 20. The dissolution profile of best solid dispersion i. e. CXB: Mannitol 1:4 KM, showed maximum dissolution rate which was selected for formulation of tablets containing SSG 21 as disintegrant.

Preparation of Physical Mixtures: Physical mixtures were prepared by simple blending of accurately weighed quantities of drug (s) and carrier (s) sifted through sieve # 100 in a closed glass bottle. The powder were then stored in a dessicator.

Kneading Method: The weighed quantities of drug and carrier were triturated in a glass motor with a small volume of methanol. The thick slurry was kneaded for 45mins and then dried at 500C to constant weight. The dried mass was Pulverized and sifted through Sieve #100 and stored in a dessicator.

Solvent Evaporation Method: The accurately weighed amounts of drug and polymer were dissolved in sufficient quantity (60ml) of solvent blend to obtain clear solution. Dichloromethane and methanol in the ratio of 2:1 was used as solvent blend for Mannitol. The solvent blend was removed by evaporation in a water bath at 450C under reduced pressure. The resulting residue was then transferred to glass desiccators and dried under vacuum to constant weight. The dried product was powdered and sifted through Sieve #100 and stored in a dessicator prior to use.

Drug Content Analysis: An ultra violet spectrophotometric method based on the measurement of absorbance at 254 nm in water containing 2%w/v Sodium lauryl Sulphate was developed and used for the estimation of CXB. The method obeyed Beer’s law in the concentration range of 0-10g/ml. When a Standard drug solution was assayed repeatedly (n=6).

In- vitro Dissolution Study: The dissolution rate of Celecoxib as such and it’s solid dispersions was studied using DISSO 2000, Lab India 8-Station Dissolution Rate test Apparatus with a paddle stirrer .The Dissolution rate was studied in 900ml of water containing 2% SLS, Sodium lauryl sulphate was added to the dissolution fluid to maintain sink condition. Celecoxib (100mg) or its SDs equivalent to 100mg of Celecoxib, a speed of 50 rpm and temperature of 37oC ± 10C were used in each test samples of dissolution medium (5ml) were withdrawn through a filter (0.45 micron) at different time intervals, suitably diluted and assayed for Celecoxib by measuring absorbance at 254nm.The dissolution experiments were conducted in Triplicate.

Formulation and preparation of Tablets of Celecoxib- Mannitol Solid Dispersion: The tablet formulations F1, F2, F3 &F4, were developed from Celecoxib-mannitol solid dispersion among that F2 has shown maximum in-vitro dissolution, using SSG (sodium starch glycolate ) as disintegrant. Aerosil (1%) and magnesium stearate (1%) were used as a glidant-lubricant. The average weight of the tablet was adjusted to500 mg. Using lactose and micro-crystalline cellulose (MCC) as diluents .All the ingredients were mixed intimately and the mixture was compressed in to tablets (500mg weight) on a Rimek rotary tablet machine (Karnavati Eng. Pvt. Ltd). The tablets were stored in a tightly closed glass container and evaluated for following characteristics in triplicate.

Evaluation of the Tablets of Celecoxib-Mannitol Solid Dispersions: Compressed tablets were then evaluated for hardness 22, disintegration 23, Friability 24 and drug content. Hardness was measured by Monsanto type hardness tester. One tablet was placed in each tube of disintegration apparatus (USP/IP standard). The test was carried out using distilled water as a disintegration media at 24oC±2oC.

Friability was determined in friabilator (model Ef- 2, electro lab), by taking 10 tablets. For drug content analysis, 20 tablets were accurately weighed and finally powdered. The quantity of powder equivalent to 100mg of Celecoxib was taken into a 100ml volumetric flask, and dissolved in 25 ml of methanol and volume adjusted to 100 ml with methanol and filtered. Filtrate was diluted suitably and assayed for drug content at 254nm. Using double beam U V/ Visible spectrophotometer (shimadzu, model -1700). The drug content of the tablet was found to be 100.5%. 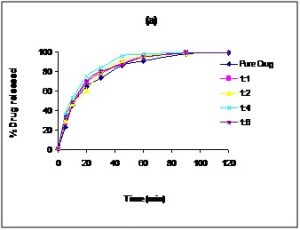 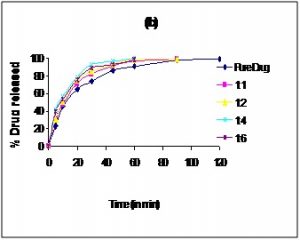 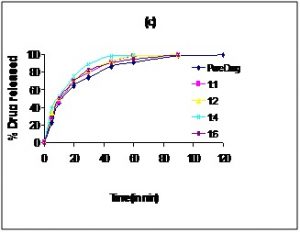 It is indicated that The Celecoxib: mannitol. 1:4 Kneading methods shown maximum dissolution rate. It was converted to cost effective tablet formulation with improved dissolution .F2 gave faster dissolution rate than the tablets prepared according to other formulae shown in Fig. 2. 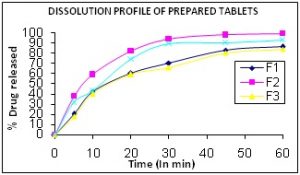 The mean hardness 3kg/cm2 .The results of disintegration and it disintegrates within (160s). The friability and assay of F2 was found to be0.82% and100.6% respectively. Fig. 3 Compares the in-vitro release profiles of   F2 with conventional market capsule. (Brand Celecoxib-100 capsule containing 100mg of Celecoxib from Unisule Pvt. Ltd. Sonipat, Haryana) the results were similar to marketed capsule. F2 weighed 82% in 20 min marketed product with 85% in 20min. 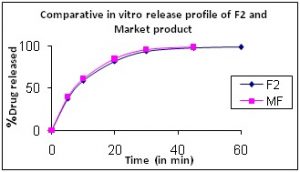 It is clearly evident that F2 and marketed product are greater than pure drug. So F2 as considered cost effective formulation with higher in-vitro dissolution. The dissolution was found to obey first order release in each case of F2 and MP respectively (Fig. 4). 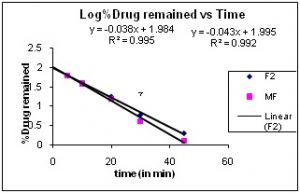 The obtained DSC thermogram corresponding to the melting point of CXB and MANNITOL indicated that SDs was stable and absence of any additional peak indicated no interaction between drug and carrier. IR spectroscopy was used to study the possible interaction between CXB and MANNITOL in SDs the spectra showed the characteristic peaks corresponding to the drug and carrier used was unchanged showing no significant interaction between drug and carrier. Reproducibility studies are performed for SDS of CXB: MANNITOL 1:4 prepared by KM. five batches prepared under similar set of conditions the drug content of all the batches was calculated, the drug content values are subjected to one way ANOVA test. As the calculated F value is lesser than the tabulated F value, it is concluded that there is no significant difference in the batches prepared. In order to determine the change in the in-vitro release profile on storage stability study of F2 was carried out at 400c and 75% RH for one month, no visible physical changes were observed in the formulation withdrawn from the humidity chamber.

CONCLUSION: The present study conclusively indicated that the tablets prepared from CXB: MANNITOL 1:4 KM containing 5% SSG and MCC i.e. F2 shown high promising improvement in the dissolution characteristics and thus there is possible enhancement in the bioavailability of Celecoxib.

ACKNOWLEDGMENTS: The Authors are thankful to Karup Pharma  Pvt . Ltd, Hyderabad for providing the gift sample of Celecoxib  and the Chairman and Principle , Dr H.L.T college of pharmacy , Channapatna , Ramnagra, Dist , Bangalore, for providing the necessary  facilities to carry out the study.