INTRODUCTION 1, 2, 3, 4, 18: Solid dosage forms are popular because of low cost, ease of administration, accurate dosage self medication, pain avoidance and the most importantly the patient compliance. The most popular solid dosage forms are being tablets and capsules 1, 18. However in case of dyspepsia of geriatric patients, the underdeveloped muscular and nervous system in young individuals and incase of uncooperative patient, many problems is occur but swallowing is common phenomenon which leads to poor patient compliance. To improve these drawbacks fast dissolving tablets or orally disintegrating tablets has immersed as alternative oral dosage forms 2.

The FDT technology, which makes tablets dissolve or disintegrate in the mouth without additional water intake. The FDT formulation is defined by the Food and Drug Administration (FDA) as “a solid dosage form containing medical substances whish disintegrates rapidly, usually within a seconds, when placed upon the tongue3.” According to European Pharmacopoeia, “the FDT should disperse/disintegrate in less than three minutes 1, 4. Fast dissolving tablets are also called as mouth-dissolving tablets, melt-in mouth tablets, Orodispersible tablets, rapimelts, porous tablets, quick dissolving etc 1. The basic approach in development of FDT is the use of superdisintegrants, which provide instantaneous disintegration of tablet after putting on tongue, their by release the drug in saliva 5. The fast dissolving tablets are rapidly dissolved or disintegrate by the use of superdisintegrants.

Disintegrants are important excipient ofthe tablet formulation, they are always added totablet to induce breakup of tablet when they arecomes in contact with aqueous fluid and thisprocess of desegregation of constituentparticles before the drug dissolution occurs, isknown as disintegration process and excipientswhich induce this process are known asdisintegrants.

The objectives behind additionof disintegrants are to increase surface area ofthe tablet fragments and to overcome cohesiveforces that keep particles together (Fig. 1). 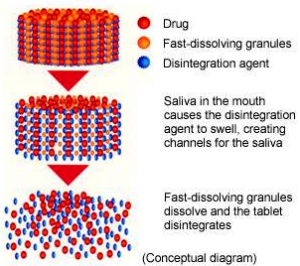 Then the frozen blister packs are placed in refrigerated cabinets to continue the freeze-drying. After freeze-drying the aluminum foil backing is applied on a blister-sealing machine. Finally the blisters are packaged and shipped. The freeze-drying technique has demonstrated improved absorption and increase in bioavailability. The major disadvantages of lyophilization technique are that it is expensive and time consuming; fragility makes conventional packaging unsuitable for these products and poor stability under stressed conditions.

The heat molding process involves preparation of a suspension that contains a drug, agar and sugar (e.g. mannitol or lactose) and pouring the suspension in the blister packaging wells, solidifying the agar at the room temperature to form a jelly and drying at 30oC under vacuum. The mechanical strength of molded tablets is a matter of great concern. Binding agents, which increase the mechanical strength of the tablets, need to be incorporated.

Taste masking is an added problem to this technology. The taste masked drug particles were prepared by spray congealing a molten mixture of hydrogenated cottonseed oil, sodium carbonate, lecithin, polyethylene glycol and an active ingredient into a lactose based tablet triturate form. Compared to the lyophilization technique, tablets produced by the molding technique are easier to scale up for industrial manufacture. 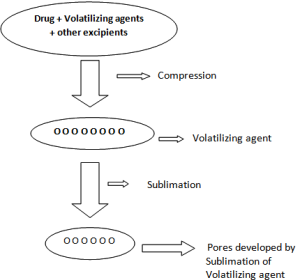 OraQuick claims quick dissolution in a matter of seconds, with good taste-masking. There are no products using the OraQuick technology currently on the market, but KV Pharmaceutical has products in development such as analgesics, scheduled drugs, cough and cold, psychotropics, and anti-infectives.

DuraSolv tablets are prepared by using conventional tabletting equipment and have good rigidity (friability less than that 2%). The DuraSolv product is thus produced in a faster and more costeffective manner. DuraSolv is so durable that it can be packaged in traditional blister packaging, pouches or vials. One disadvantage of DuraSolv is that the technology is not compatible with larger doses of active ingredients, because the formulation is subjected to such high pressures on compaction.

Unlike OraSolv, the structural integrity of any taste masking may be compromised with high drug doses. The drug powder coating in DuraSolv may become fractured during compaction, exposing the bitter-tasting drug to a patient’s taste buds. Therefore, the DuraSolv technology is best suited for formulations including relatively small doses of active compound.

To prevent inhomogeneity by sedimentation during this process, these formulations require a large proportion of undissolved inert filler (mannitol), to increase the viscosity of the inprocess suspension. The high proportion of filler reduces the potential porosity of the dried dosage form and results in denser tablets with disintegration rates that are comparable with the loosely compressed fast melt formulations.

The pairing of AdvaTab with Microcaps creates products that offer the dual advantage of a patient preferred dosage form, together with a superior taste and smooth mouth feel. This is a critical advantage as the unpleasant taste of drugs is a significant restriction in the application of other ODT technologies.

Excipients used in the formulation of FDT 10, 12, 16:  Excipients balance the properties of the actives in fast-melting tablets. This demands a thorough understanding of the chemistry of these excipients to prevent interaction with the actives. Determining the cost of these ingredients is another issue that needs to be addressed by formulators. The role of excipients is important in the formulation of fast-melting tablets. These inactive food-grade ingredients, when incorporated in the formulation, impart the desired organoleptic properties and product efficacy. Excipients are general and can be used for a broad range of actives, except some actives that require masking agents.

Mechanism of Superdisintegrants 1, 5, 13, 20: There are four major mechanisms for tablets disintegration as follows (Fig. 4). 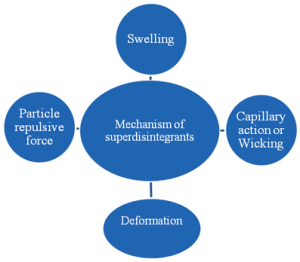 For these types of disintegrants maintenance of porous structure and low interfacial tension towards aqueous fluid is necessary which helps in disintegration by creating a hydrophilic network around the drug particles. Water is pulled by disintegrant Particles swell and breaks up and reduced the physical the matrix form within bonding force between particles. 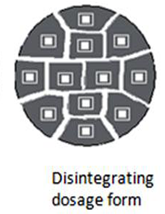 Criteria for selection of drug for Fast Dissolving Tablets 2, 14: 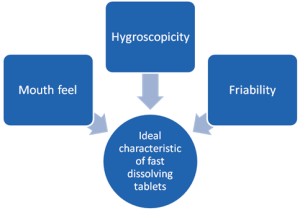