ABSTRACT: Present paper reports the chemical constituents in the fatty acids obtained from the whole plant of diploid and tetraploid Physalis angulata Linn. collected from hot desert areas of Rajasthan. The fatty acid analysis was carried out by gas chromatography-flame ionization detector (GC-FID). Meiotic studies confirm the ploidy level of the plant. Diploid (n = 12) cytotype is reported from Udaipur district and tetraploid (n = 24) cytotype from Sri Ganganagar. There is a considerable difference in the fatty acid constituents in the cytotypes. Major constituents of fatty acids are Oleic acid (24.93%, 2x; 18.71%, 4x); capric acid (13.4%, 2x; 0.14%, 4x); Palmitic acid (6.966%, 2x; 12.38%, 4x); Linoleic acid (5.5%, 2x; 9.76%, 4x) and Linolenic acid (6%, 2x; 11.67%, 4x). The main objective of the object work was to compare the fatty acid composition within two cytotypes. Such analysis of plants is very important on commercial level for the productions of cosmetic and has great interest in pharmaceutical companies for the production of drugs.

Each fatty acid has its own discrete biological activity 4, 14. All higher organisms and plants contain lipids which are the chief source of substantial quantities of PUFA. The omega-6 (n-6) and omega-3 (n-3) fatty acids are the two principal group of PUFA derived from α-linolenic acids (18:3 n3) and linoleic acid (18:2 n6), respectively. These two parent fatty acids can only be naturally synthesized in plants and therefore, have become the essential dietary components for animal and human diet for maintaining optimum health 3, 5.

These derivatization reagents also sometimes interact with the active drug compound and cause changes in the results. So it is very important to use direct determination of the fatty acids without using any derivatization agents. Analysis of underivatized acids was first carried) by using Gas chromatography in 1956 7, 8. After three years, same authors published another article presenting the GC analysis of fatty acids in the form of methyl esters. In early days this technique has its own limitations in the form of large amount of sample requirement and sample wastage. But today the technique is much developed with fully automated computerized methods. A derivatization free GC-FID method was developed which resulted in good recoveries and reproducibility 11.

Plant Material: Plant material was collected from Udaipur and Sri Ganganagar districts of Rajasthan. Meiotic studies were carried out to confirm the ploidy level. Diploid cytotype was collected from Udaipur and tetrapliod cytotype from Sri Ganganagar. Plant materials were washed with water and shade dried at room temperature. The dried plants were crushed into powder for further analysis.

Preparation of Methy-esters of Fatty Acids: Trans-methy mixture was prepared by mixing 150ml of methanol and 70ml of toluene and adding 7.5 ml of concentrated sulphuric acid. 10-12mg of fat was added to 10ml of transmethylation mixture. This mixture was heated in water bath under reflux for 90mins. After cooling, 10ml of petroleum ether (40-60 °C) and 10ml of water was added. The mixture was shaken well and the layers were allowed to separate. The aqueous layer was pipetted out using fine pipette. The washing was repeated using 10ml of water. Afterwards, 2-3g of anhydrous sodium sulphate was added to remove the moisture. Decanted the clear ether layer and evaporated to dryness. Residue was dissolved the residue in 0.3ml of petroleum ether for gas chromatography.

GC Analysis of Flames: Gas chromatography coupled with flame ionization detection (GC-FID) is widely used, as it is rapid and efficient method. Moreover, separation, quantification and identification of long chain fatty acids mixture, which is done by GC-FID, are utilized to acquire the information about various biological functions. Determination of fatty acid profiles in nutritional and clinical research with precision and fastness has become popular for human health and basic research.

The operating conditions used to examine methyl esters of fatty acids are as follows. Fatty acids were converted into methyl esters (FAMEs) before gas chromatography (GC) analysis according to the standard methods by Ranganna (1986). Quantitative determinations of FAMEs were conducted by using Gas Chromatograph with flame ion detector (GC-FID) and capillary column HP-88 agilent technologies (100×0.25mm×0.20µ). The injection volume was 1.0µL, with split mode of injection, oven temperature was kept at 250 °C and helium was used as carrier gas. The temperature programme increased from 40 °C to 140 °C. The retention time of the FAMEs was compared with that of the standards (FAME-37 MIX SUPELCO) for the identification and quantification. 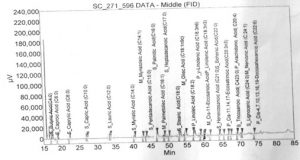 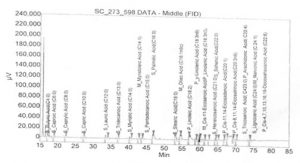 PUFAs have a very diverse effect on human health. These help in the prevention of cardiovascular diseases, cancer and coronary heart diseases. Their non-substitutable roles in many biological pathways are crucial 1, 3. These are also very helpful in treatment of diabetes type two, hypertension, autoimmune diseases, renal diseases and rheumatoid arthritis.

CONCLUSION: Both the cytotypes of P. angulata Linn. are source of important fatty acids including all the groups of SFAs, MUFAs and PUFAs. However the composition of varies in the two cytotypes of the plant. From the results it is concluded that the analyzed tetraploid cytotype is characterized by higher amount PUFAs.

ACKNOWLEDGMENTS: This study was funded by Department of Biotechnology (DBT), New Delhi, DBT-IPLS Project with reference number BT/PR 4548/NF/22/146/2012. The authors are also thankful to Head, Department of Botany, Punjabi University, Patiala, for all the necessary laboratory facilities.