ABSTRACT: A novel Assay method for the determinationof1-Deoxy nojirimycine(DNJ) was proposed by the authors using ion chromatography. The method was found to be accurate, simple and precise. A method precision RSD of 0.5%, RSD for intermediate precision of 0.6% and correlation coefficient was found to be 0.9999. A recovery of 99.7 to 100.1% at 50%, 100% and 150% levels was found. The DNJ solutions and mobile phase were found to be stable up to 48 hrs. The robustness study was found that the method was robust at low flow, high flow, low strength and high strength. Specificity of DNJ with other cations and organic bases were not interfered. The peak of DNJ was homogeneous, this specificity of peak homogeneity study was performed with UPLC-TOF by collecting peak of DNJ from detector end of Ion chromatography. All analytical parameters were performed by using ICH guidelines

INTRODUCTION: 1-Deoxynojirimycin (DNJ) is the natural product which is located in Mulberry (Morus alba L.; Moraceae) plants and which is present in Asian countries like India, China, Japan, Thailand, Korea. Which is most potent glycosidase  inhibitor, the enzyme from decomposing starch and sugar and preventing the glucose absorption, resulting in  decrease of blood sugar level, and the Medicine like Miglitol, Miglustat are the drugs which are function as this, these can synthesized from 1-Deoxynojirimycin (DNJ), this is acting as

Key starting material for miglitol and miglustat which lack of chromophore in its molecule and therefore difficult to be detected by HPLC-UV analysis and another difficulty of DNJ analysis is the separation method as DNJ is highly polar. The interaction between the stationary phase of reversed phase columns and DNJ is so weak that DNJ does not retain in the column. 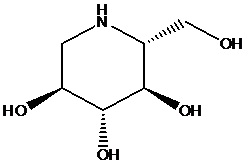 The main objective of this was to develop assay method for 1-Deoxynijorimycine in bulk levels of 1-Deoxy nojirimycine which can be used for the key starting material for Miglitol and Miglustat active pharmaceutical ingredients by using ion chromatography with conductivity detector.

During development of assay method for DNJ, the concentration of peak in ion chromatography was established, the concentration was 10 %w/w standard solution with respect to 1 mg/mL of analyte concentration, the standard solution was injected into Ion chromatography conductivity detector with column Metrocep –C2, 150mm and mobile phase was 10% Acetone with 4.0 mM Nitric acid the peak of DNJ eluted at 3.0 min retention time. Same condition with Metrocep -C4, 250 mm column then the Peak shape was the not sharp, The flow was 1.0 mL, the another condition was the 4 mM tartaric acid and 0.75mM Dipicholinic acid in Water with Metrocep -2,150mm column and the flow was 1.0 mL, peak shape was not sharp and with Metrosep -4, 250mm column and the flow was 1.0 mL, peak shape was sharp and with resolution with other cations and bases were more than 2.0. Retention time was 7.5 minutes, the optimized method condition were tabulated in Table 1.

Analyses were performed on Metrohm AG (Switzerland), consisting of a Auto sampler as 585 Professional sample processor and Column compartment and Conductivity detector as as882 Compact IC plus. System control, data collection and data processing were accomplished using MagIC Net chromatography data software. The chromatographic condition was optimized using Metrocep C4 250/4.0,5.0μmcolumn. 4 mM tartaric acid and 0.75mM Dipicholinic acid in Water as buffer. Filtered the solution through 0.22µ membrane filter and degas by sonication and mix with 10% acetonitrile as a mobile phase. Mobilephase was filtered through 0.22 μm nylon membrane filter and degassed under vacuum prior to use. The separation of DNJ was achieved by isocratic elution using the above mobile phase (Table 1). Water was used as a diluent. The finally selected and optimized conditions were as follows: injection volume 20 μL, isocratic elution (Table 1), at a flow rate of 1.0mL/min. Under these conditions.

Weigh accurately and transfer about 10 mg of DNJ working standard into a 100 mL volumetric flask. Add about 70 mL of diluent and sonicate to dissolve. Dilute to volume with diluent and mix well.

Weigh and transfer about 10 mg DNJ Lab samples into a 100 mL volumetric flask. Add about 70 mL of diluent, sonicate for 60 seconds. Dilute to volume with diluent and mix well. 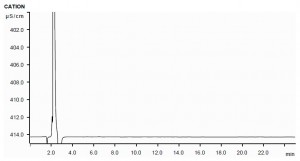 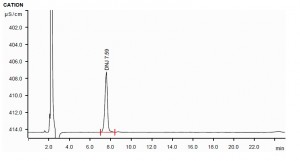 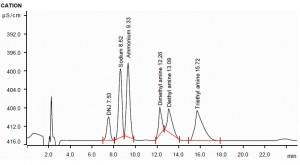 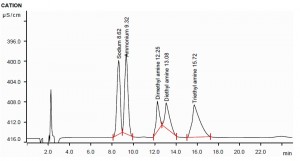 After satisfactory development of method it was subjected to method validation as per ICH guideline 9. The method was validated to demonstrate that it is suitable for its intended purpose by the standard procedure to evaluate adequate validation characteristics (system suitability, accuracy, precision, linearity, robustness, ruggedness, solution stability and specificity).

System suitability parameters were measured so as to verify the system performance. System precision was determined on five replicate injections of standard preparation. The percentage RSD of area counts of five replicate injections was 0.4 %, which indicates that the system is precise. The results obtained were shown in Table 2. The parameters all complied with the acceptance criteria and system suitability was established.

TABLE 2: RESULTS OF SUITABILITY OF SYSTEM

The precision of the assay method was evaluated by carrying out six independent determinations of DNJ test samples against qualified working standard. The method precision study shows the repeatability of the results obtained by the testing method. The % RSD (n=6) was 0.5 %. The results obtained are shown in Table 3.

The purpose of this study is to demonstrate the reliability of the test results with variations. The reproducibility was checked by analyzing the samples by different analyst using different chromatographic system and column on different day. The analysis was conducted in the same manner as the method precision and the % RSD of all six sets of sample preparations was determined (Table 4). The % RSD was 0.6 % so this study proved that the method to be rugged enough for day to day use (Table 4)

The accuracy of an analytical method is the closeness of test results obtained by that method compared with the true values. To confirm the accuracy of the proposed method, recovery experiments were carried out by standard addition technique. The accuracy of the method was carried out by adding known amounts to three concentration levels; 50, 100, and 150% of DNJ in triplicate. The samples were given the same treatment as described in sample preparation. The percentage recoveries of DNJ at each level and each replicate were determined. The mean of percentage recoveries (n=3) and the relative standard deviation was calculated. The amount recovered was within ± 1 % of amount added, which indicates that there is no interference due to cations and organic basic impurities. It was confirmed from results that the method is highly accurate (Table 5).

The linearity of an analytical method is its ability to elicit test results that are directly, or by a well-defined mathematical transformation, proportional to the concentration of analyte in sample within a given range. The nominal concentrations of standard solutions for DNJ at six different concentration levels ranging from 50 to200% of analyte concentration. The DNJ correlation coefficient was greater than 0.999 %intercept at 100%level was 0.7%. The regression statistics are shown in Table 6 and Plot 1. 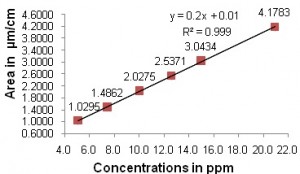 The robustness of an analytical procedure is a measure of its capacity to remain unaffected by small, but deliberate variations in method parameters and provides an indication of its reliability during normal usage. The effect of change in flow rate (± 0.2mL/min) and strength of Mobile phase 10% of buffer less than normal condition and 10%more than normal condition. The robustness results were shown in Table 7.

Stability of sample in diluent and mobile phase:

Specificity is the ability of the method to measure the analyte response in the presence of its impurities,  because of the conductivity detector, DNJ shows specificity the cations and organic bases ,assay was not vary in presence of all, this is present in Table 9. Fig. 2 and 3 are shows that there is no any interferences, and peak homogeneity was done by collecting the DNJ peak from Ion chromatography detector end and injecting into UPLC-TOL, Peak homogeneity spectrum with single 164(M+H) and Formulae of DNJ were shown in Fig. 6 and 7. 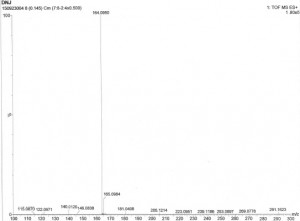 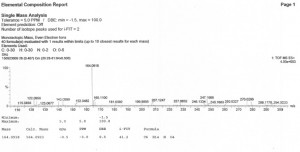 The lab batches assay was determined by using the present validated method against to reference standard this was shown in Table 10.

CONCLUSION: Assay method of 1-Deoxy nojirimycine (DNJ) by Ion Chromatograpy method was successfully developed for the assay determination of DNJ in bulk quantities and lab synthesized batches. The developed method is selective, precise, accurate, linear, and robust. The method is specific for the analytes and free from the interference of all cations and other organic bases. The run time (25.0) enables for rapid determination of DNJ and Peak Homogeneity by mass spectrometry confirms that no synthetic impurities co-eluting with DNJ. This is first method to determine the DNJ without derivatization. Moreover, it may be applied for content of DNJ in Miglitol and Miglustat APIs.

ACKNOWLEDGEMENT: The authors would like to thank M/s Dr. Reddy’s Laboratories Ltd. for supporting this work. Author also would like to acknowledge Process Research and Development for their immense support. All the development and validation work performed at Analytical Research and Development (AR&D) Lab., Dr. Reddy’s Laboratory Ltd., CPS, Miyapur, Hyderabad, India.