ABSTRACT: Crustacean’s shells constitute the traditional and current commercial source of Chitin. These derivatives/molecules are potential resource as well as multiple functional substrates have generate attractive interest in various fields such as biomedical, pharmaceutical, food and environmental industries. In the present investigation, chitinous wastes were collected from the fresh water areas of Dehradun and Rishikesh of Uttarakhand State. The bacterium, Bacillus sp. isolated from soil produces chitinase enzyme responsible for degradation of chitin obtained from chitinous wastes. Further the chitinases enzyme was utilized to degrade the chitinous wastes into chito-oligosaccharides. Chitosan was prepared by deacetylation process and chito-oligosaccharides (COS) was prepared by enzymatic hydrolysis of chitosan. As per the solubility aspect of chitosan and chito-oligosaccharides, it was found that these are more soluble in comparison to chitin, the parent compound. The anti-diabetic potential of these chitin based derivatives was determined against alloxan-induced albino rats (diabetic model). In alloxan-induced diabetic rats, both the chitosan and chito-oligosaccharides (COS) both decremented blood sugar levels at the cessation of 1st, 2nd and 4th hours after dosing in acute studies.  Simultaneously similar effect was observed during chronic studies, after 1st, 2nd and 3rd week during repeated dosing of the extracts in diabetic model at an interval of 7 days. It was thus observed that, Chito-oligosaccharides (COS) at dose of 50 mg/kg/day and chitosan at dose of 100 mg/kg/day showed significant hypoglycemic activity in comparison to standard anti-diabetic drug, glibenclamide (10 mg/kg).

INTRODUCTION: Chitin, a polysaccharide of animal origin, is obtained from waste material of seafood industries. It occurs in the skeletal material of crustaceans such as crabs, lobsters, shrimps, prawns and crayfish. Chitin is also the important component of exoskeleton of Arthropods Chitin is also forming the important composition of fungus. Chitosan is the deacetylated product formed by treatment of chitin with concentrated (50%) caustic alkali.

The regulatory and toxicological status of Chitosan has already been established. Chitin and Chitosan are described as a family of linear polysaccharides consisting of varying amounts of linked residues of β (1, 4) linked N-acetyl-2 amino-2-deoxy-D-glucose and 2-amino-2-deoxy-Dglucose residues. Chitin samples have a low amount of D units and hence the polymer is insoluble in acidic aqueous media.

Chitooligosaccharides and their N-acetylated analogues are useful for applications in various fields because they have specific biological activities such as antimicrobial activity, antitumor activity, immuno-enhancing effects 1. Some chito-oligosaccharides such as (GlcNAc) and (GlcNAc) have been reported to possess antitumor activity 2. Chemical and biological methods for extraction of chitin and chitosan modification for application in the food industry were determined 3.  Macroporous artificial skin containing antibiotics was prepared by lyophilization of chitosan/PVA blendmer, which could protect the wound surfaces from bacterial invasions by suppressing bacterial proliferation effectively 4. It was investigated that chitin and chitosan from crustacean waste can be used as food processing aid. It was reported that Chitosan is a potential biomaterial effective against typhoid 5. The antibacterial 6, antifungal 7 and plant growth regulation activities 8 were reported. Diabetes is a global prevalent endocrine disorder with an estimated worldwide prevalence of 246 million people in 2007 and forecasts to elevate to 300 million by 2025.

It is an endocrine predicated disorder of multiple etiologies characterized by hyperglycemia and hyperlipidemia. It is a kind of epidemic which is spreading at a faster rate day by day. The patients suffer from diabetes experience sundry complications, such as atherosclerosis, diabetic nephropathy and neuropathy. There are many oral hypoglycemic agents, such as sulfonylurea and biguanides, are available along with insulin for the treatment of diabetes, but these agents have paramount side effects. Today much research has been focused on medicinal plants and their molecules which can be utilized as anti-diabetic agent.

The demineralization of chitinous wastes was performed 9, 10. The chitinous wastes were treated with 1.75 N acetic acid at room temperature for about 12-15 hours. The ratio of waste to solvent were maintained (1:15 w/v). The demineralized material obtained were recovered by filtration and rinsing with de-ionized water and will be dried in forced hot air oven at 650C.

Deproteinization and removal of lipids:

The new and advanced methodology for deproteinization of proteins from demineralized chitinous wastes was designed by using deproteinization agents. This process can be performed either by using proteolytic enzymes such as proteinase-K dissolved in buffer containing 0.05 M Tris-base (pH, 6.5-9.1) in a ratio 1:20 (w/v) in flasks at various temperatures in incubator-shaker for about 72 h and adding mixture of solvents (phenol: chloroform, 1:1 ratio) again and again to the residue obtained and centrifuging the mixture until the residue gives no test for the presence of protein content. After repeating the procedure for 3-4 times, finally the residue was treated with 2N sodium hydroxide (1:25 w/v) at 700C for 1 hour. The lipid content gets dissolved in phenol: chloroform mixture and was removed from the chitinous wastes. Greese spot test was performed in order to determine qualitatively the presence of lipid content if any present in the residual material11.

Isolation of microbe for screening of chitinases production:

The soil was procured from Doiwala region of Dehradun (U.K), India by performing the serial dilution method and maintained on glycerol yeast medium plates at 37°C.

For the production of chitinase, microbial strain was grown in 100 ml of fresh medium (3% w/v chitin; 0.1% KH2PO4; 0.05% MgSO4.7H2O; 50mM Sodium Phosphate buffer, pH 6.0) in a 250 ml Erlenmeyer flask at 30°C. For reflecting the growth of the culture in this medium OD at 660 nm was taken using blank as medium in which no inoculum was added. The supernatant (enzyme) was collected from 3 day old cultures by centrifuging the mixture at 12,000 g for 20 minutes. The enzyme was concentrated by condensing the solution in order to reduce its volume 12.

For the preparation of chito-oligosaccharides, 1% colloidal chitin prepared from standard chitin, fresh water crab and fresh water prawn were dissolved in 0.05M Phosphate buffer (pH, 5.5). About 10 ml of enzyme (purified from Bacillus strain) was added in 15 ml of 1% of each of the colloidal chitin in a 100 ml flask; further flask was kept at 30°C for 3 h. The reaction was terminated by immersing the tubes in boiling water for 5 minutes. After performing centrifugation at 3000 rpm, the insoluble materials were collected and condensed to obtain the chito-oligosaccharides 10. The chito-oligosaccharides extracts were dissolved in distilled water.

The demineralized and deproteinized chitin material was subjected to concentrated sodium hydroxide at 40% w/v 12. The deacetylated forms of chitosan obtained were solubilized in 2 M dilute acetic acid. Further the chitosan extracts were dissolved in distilled water.

Two to three month old either sex albino rats of body weight 180 - 210 g were obtained from Central animal house facility (CPCSEA Regd. no. 186/ CPCSEA, dated: 18 December, 2014) acclimatized for seven days to faculty animal house, and maintained at standard conditions of temperature and relative humidity, with a 12-hour light dark cycle. Water and commercial rat feed ad libitum were provided. The current study was carried out with prior sanction from our Institutional Animal Ethical Committee and proposal no. 583.

Induction of diabetes to experimental animals:

Alloxan was commonly utilized as an animal model of diabetes. The animals were fasted for 12h prior to the induction of diabetes with slight modification. Alloxan, freshly prepared in 0.5% Tween 80 was administered intraperitoneally at single dose of 140mg/kg body weight 13. Development of diabetes was confirmed by measuring blood glucose concentration 5 days after the administration of ALX. Rats with blood glucose level of above 200 mg/dl were considered to be diabetic and used for the studies.

In the present experiment, a total of 24 rats (18 diabetic surviving rats; 6 normal rats) were used. The chitosan and chito-oligosaccharides extracts were diluted to prepare the specific doses. The rats were randomized into seven groups comprising of six animals in each group as given below.

Blood samples were collected from retro-orbital plexus of each rat under mild anaesthesia at 0, 1, 2 and 4h (Acute study) as well as on 0th, 7th, 14th and 21st days after administration (Chronic study) of chitosan and chito-oligosaccharides (COS) extracts. Blood glucose level was estimated by enzymatic glucose oxidase method. The reduction in blood glucose level was calculated with reverence to the initial level. The body weight of all animals was quantified on the 0, 7th, 14th and 21st days after 1h of treatment with the chitosan, chito-oligosaccharide extracts and GLB 13.

Five days before the termination of the experiment, the oral glucose tolerance test (OGTT) was performed to evaluate the ability to respond appropriately to a glucose challenge. For this purpose, overnight fasted rats (control and treated rats) were feed glucose (2g/kg body weight) orally and blood was collected at 0, 30, 60 and 120 minutes interval from orbital sinus for glucose estimation using a glucometer. 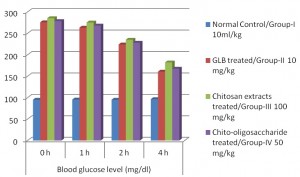 As per chronic study, it was observed that repeated dose administration of diabetic rats with GLB (10 mg/kg) and chitosan (100 mg/kg) and chito-oligosaccharides (50 mg/kg) respectively in separate specific groups with an interval of 7 days had progressively reduced the blood glucose level in a dose dependent manner over a period of 3 weeks. The results were found to be most significant of chitosan and chito-oligosaccharides extracts at 4th, 7th, 14th and 21st days of treatment. It was observed that with the passage of time of dosing and performing repeated dosing of chitosan and chito-oligosaccharides extract, the blood glucose level gets decreases in comparison to the positive control/GLB. The results are shown in Table 2 and Fig. 2. 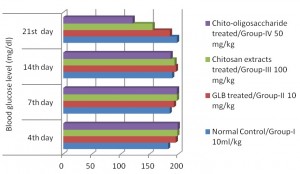 The study thus suggests that chitosan and chito-oligosaccharides at different doses are important anti-diabetic agents and showed no mortality in alloxan-induced albino rats. These molecules can be utilized to prepare anti-diabetic drugs as these are natural and safe. Further studies in this aspect can lead to determination of most optimum drug and duration required for earliest treatment of diabetes. This is the first kind of study performed to determine the anti-diabetic activity and standardizing dose of chitosan and chito-oligosaccharides (chitin-based derivatives) in treatment of diabetes. The results are satisfies the previous studies reported 14-18.

ACKNOWLEDGEMENT: The authors acknowledge their kind cooperation to the research team of Institute of Transgene Life Sciences, Dehradun and Lucknow for providing the animal house facility for carrying out the work on anti-diabetic animal models.