INTRODUCTION: Oral delivery is the safest, most convenient and economical method of drug delivery. Mouth dissolving strips have attained great importance in the pharmaceutical industry due to their unique properties and advantages 1. Fast dissolving drug delivery system gaining popularity and acceptance as new drug delivery.

A system because they are easy to administer and leading to better patient compliance. Oral fast-dissolving dosage form consists of mouth dissolving tablets & fast dissolving films. Mouth dissolving tablets are associated with many problems like leaving residues in the mouth, which causes feeling of grittiness in mouth; there is a fear of choking and difficulty in swallowing tablets.

Fast dissolving flash release oral film was developed based on the technology of the transdermal patches for oral delivery of drugs. The delivery system consists of a thin film of the size of a postage stamp placed on the patient’s tongue or mucosal tissue, where it instantly hydrates by absorbing saliva; the film then rapidly disintegrates and dissolves to release the drug for oral mucosal absorption. The availability of a larger surface area of the film leads to rapid disintegration in the oral cavity. It is retained at the application site and rapidly releases the active agent for local and/systemic absorption. Patients suffering from dysphasia, repeated emesis, motion sickness, mental disorder, pediatric and geriatric patients prefer this dosage form as they cannot swallow large quantities of water 4, 5. The oral or buccal mucosa being highly vascularized, drugs can be absorbed directly and can enter the systemic circulation without undergoing first-pass hepatic metabolism. This advantage can be exploited in preparing products with improved oral bioavailability of molecules that undergo first-pass effect 6. Candesartan cilexetil is an anti-hypertensive agent, angiotensin II receptor antagonist used to treat hypertension, congestive heart failure, and diabetic nephropathy. It has 15% oral bioavailability due to poor aqueous solubility that makes absorption and dissolution rate limited. This novel drug delivery system can also be beneficial for meeting the industry's current needs: improved solubility/stability, biological half-life, and bioavailability enhancement of drug 7.

MATERIAL AND METHOD: Candesartan cilexetil was obtained as a gift sample from Medopharm Pvt limited, Bangalore. HPMC E5, HPMC E15 and HPMC K15 were obtained from Swiss Garnier Genenexiaa Sciences, Sikkim. All other chemicals and ingredients were used for the study are of Analytical grade.

Drug Polymer Compatibility: Pure drug (Candesartan Cilexetil) and polymers were subjected to FTIR (Shimadzu, Japan) studies alone and in combinations. The pellets were placed in the sample holder for recording the IR spectra to study the interference of polymers with the drug 8. The scanning range was   400-4000 cm-1, and the resolution was 4 cm-1.

Formulation of Flash Release Oral Film: Candesartan Cilexetil flash release oral film was prepared by the Solvent casting method. The formulation composition of the different batches was Shown in Tables 1, 2, 3. First, the water-soluble polymers are dissolved in water at 100 rpm at a magnetic stirrer, and all other excipients are dissolved in a suitable solvent separately. Then both the solutions are mixed thoroughly and stirred at 1000 rpm. The obtained solution is incorporated with drug dissolved in a suitable solvent. The entrapped air is removed by vacuum and cast into Petri plate and dried. The film was carefully removed from the petriplate, checked for imperfections and cut to the required size to deliver the equivalent dose per strip (2 × 2 cm-2 sizes). Film samples with imperfections were excluded from study 9.

Surface Morphology: Properties such as homogeneity, transparency, and surface of the oral films were evaluated by scanning electron microscopy (SEM Tescan, Europe 10.

Film Thickness: The film thickness of the film was measured by vernier Caliper (Linker, Mumbai) at a different location (center and four corners) and meant ± S.D calculated. This is crucial to determine the film thickness uniformity as this is directly correlated to the dose accuracy in film 11.

The number of times the film can be folded without breaking gives The folding endurance value. This test was performed on five films of each formulation and mean ± S.D was calculated 13.

Drug Content Uniformity: The films were tested for drug content uniformity by UV - visible spectrophotometric method. Films of the required size (2 cm × 2 cm) were cut at three different places from the casted film. Each cut film was placed in 100 ml volumetric flask and was dissolved using methanol and set aside for 2 h. From this stock solution, 1 ml was pipette out and transferred into a 10 ml volumetric flask and the volume was made to the mark with methanol. The absorbance of the resulting solution was measured at 255 nm against blank using UV visible spectrophotometer. The percentage drug content was determined using the standard graph 14.

A combined pH electrode was used for this purpose. Oral strip was slightly wet with the help of water and kept for 30 sec. The pH was measured by bringing the electrode in contact with the surface of the oral film and allowing equilibrating for 1 min. This study was performed on three films of each formulation, and mean ± S.D was calculated 15.

The dissolution medium was kept at 37 ± 0.5 °C and stirred at 50 rpm for 30 min. The drug release was analyzed spectro-photometrically at λmax 255 nm using an ultraviolet (UV) spectrophotometer (Shimadzu, Japan) by using a calibration. The film was placed into each vessel and the test (5ml) sample was withdrawn at a particular time interval (2, 5, 10, 15, 20 and 30 min) and replaced with fresh dissolution media.

This test was performed on six films of each formulation and mean ± S.D was calculated 17, 18.

Kinetic Modeling of Drug Release: To analyze the mechanism for the release and release rate kinetics of Candesartan cilexetil, the data obtained were fitted to various kinetic equations such as zero-order, the first order, Higuchi matrix and Korsmeyer- Peppas equation. 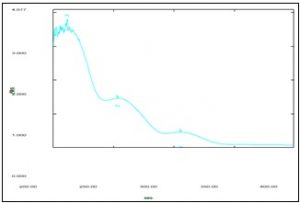 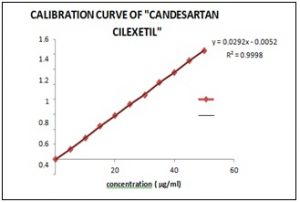 Compatability Studies (Fourier Transform Infrared Spectroscopic (FT-IR): Drug polymer interaction was checked by comparing the IR spectra of pure drug Fig. 3. and the physical mixture of the drug with the excipients used Fig. 5, 10. and optimized/final formulation Fig. 4. The results found no possible interactions between drugs and polymers used in the study were shown in Table 5, 7. 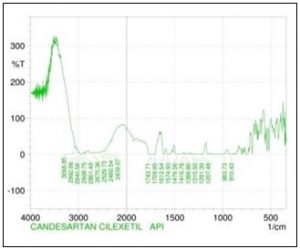 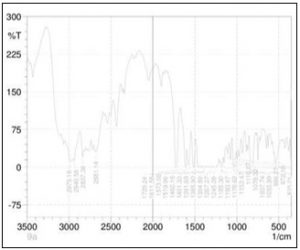 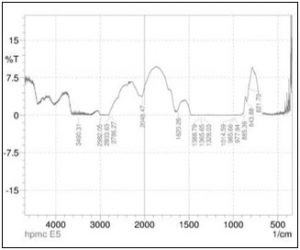 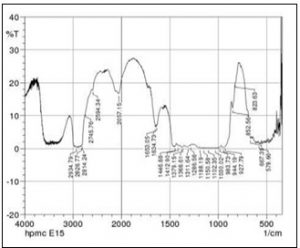 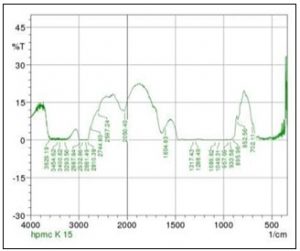 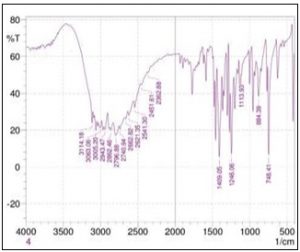 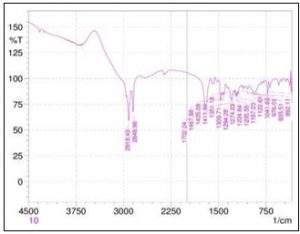 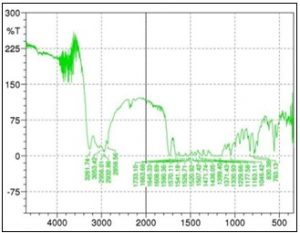 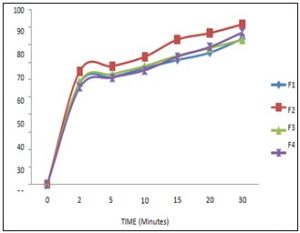 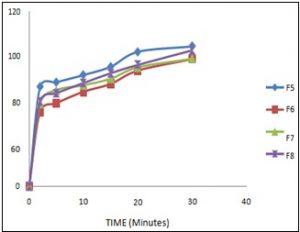 Surface Morphology: Properties such as homogeneity, transparency, and surface of the oral films were evaluated by scanning electron microscopy with a magnification of 1K × to 1000K × was shown in Fig. 11.

Weight Variation of Films: The weight variations for the different formulation was calculated and the results were shown in Table 8.

Folding Endurance: Folding endurance of the film was determined by repeatedly folding a small strip of the film at the place till it broke. Folding endurance was found to be highest for F6 films (124 ± 1.9) and lowest for F9 films (53 ± 1.7). The optimum film exhibited good physical and mechanical properties are shown in Table 8.

Drug Content Uniformity: All the films were found to contain an almost uniform quantity of the drug, as per content uniformity studies indicating reproducibility of the technique. In case three, 2 × 2 films were cut an average drug content was calculated. The drug dispersed in the range of 87.00 ± 1.76 to 105.25 ± 1.20 was shown in Table 9. Thus, the preparation met the criteria of IP content uniformity (85-110%).

Surface pH Study: The pH of the film was measured and found to be between 6.14-6.98 for all the formulations. The results were presented in Table 9. 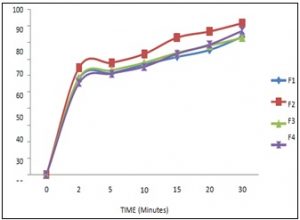 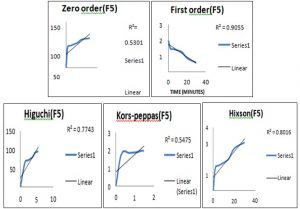 Kinetic Modeling of Drug Release: In this study, the in-vitro drug release data were fitted to commonly employed release kinetic models, namely zero-order, first-order, Higuchi and Peppas models and Hixon-Crowell model to analyze drug release mechanism from the polymeric system as shown in Table 12. The highest regression coefficient (r2) value of optimized formulation F5 was obtained 0.9832 (First order). The value of release exponent (n) was found to be greater than 0.5 that indicates non- Fickian diffusion (anomalous) based mechanism of drug release. Kinetics of drug release were shown in Fig. 15.

CONCLUSION: In the present investigation, an attempt was made to develop a flash release oral film of Candesartan cilexetil to achieve fast dissolution characteristics with improved bioavailability by the oral route.

ACKNOWLEDGMENT: The authors would like to acknowledge the Dean gratefully. Dr. J. sangumani, M. D. Madurai Medical College, Madurai, for providing these necessary facilities for this research work.

CONFLICTS OF INTEREST: The authors declare no conflict of interest