FLAVONOIDS AS COMPLEMENTARY AND ALTERNATIVE TREATMENT OPTIONS FOR DIABETES MELLITUS

FLAVONOIDS AS COMPLEMENTARY AND ALTERNATIVE TREATMENT OPTIONS FOR DIABETES MELLITUS

ABSTRACT: Diabetes is a metabolic disorder, which is characterized by insulin deficiency, insulin resistance, and aberrant metabolism in glucose, protein, and lipid. The primary causes of diabetes are Genetic and environmental factors. Diabetes is a chronic progressive disease that leads to both microvascular and macrovascular complications. This disease affects around 5% of the world population now. But, recently available oral antidiabetic agents used in orthodox medicine have unmet efficacy and undesirable side effects in patients. Therefore, Research is a significant deal requirement for the development of new remedies for diabetes are in high demand. Surveys expect that complementary and alternative medicine (CAM) is used by 80% of the world population for their primary health care. Therefore, CAM represents one of the most important options for therapy for diabetes. The objective of this work is to provide a starting point for programs leading to the development of indigenous flavonoids botanical resources as inexpensive sources for standardized crude antidiabetic drugs, and the development of lead compounds for new hypoglycemic drug development.

CAM for Diabetes: Diabetes mellitus is the most prevalent metabolic syndrome worldwide with an incidence varying between 1 to 8% 1, 16. The disease occurs when insufficient insulin is produced, or when the available insulin doesn’t function properly. Thus diabetes is characterized by hyperglycemia (elevation in blood sugar levels) resulting in various short-term metabolic changes in lipid and protein metabolism and long-term irreversible vascular changes 18.

The global prevalence of diabetes is estimated to increase, from 4% in 1995 to 5.4% by the year 2025. Currently, available therapies for diabetes include insulin and various oral anti-diabetic agents such as sulfonylureas, biguanides, α-glucosidase inhibitors, and glinides, which are used as monotherapy or in combination to achieve better glycemic regulation 19. The limitation of currently available oral anti-diabetic agents either in terms of efficacy/safety coupled with the emergence of the disease into global epidemic has encouraged alternative therapy that can manage diabetes more efficiently and safely. Diet has an emerging role in the etiology and prevention of several obesity-associated chronic diseases, most notably of diabetes and cardiovascular diseases. A dietary pattern characterized by higher consumption of vegetables, fruits, and whole grains is associated with reducing the risk of type2 diabetes mellitus 24.

Phytoconstituent Based Approach: As it is already known that use of most of the ethnobotanicals has a long folkloric history for the treatment of blood sugar abnormalities. Plants have always been an exemplary source of drugs and many of the currently available drugs have been derived directly or indirectly from them 20.

Phytochemicals, as a large group of non-nutrient secondary metabolites in plants which provide much of the color and taste in fresh or processed fruits and vegetables, are known to play a significant role in the health effects of plant-based diets. The antioxidant effects of phytochemicals such as polyphenols or carotenoids have been studied extensively, but flavonoids in particular among are widely used in preventing diabetic complications 25. 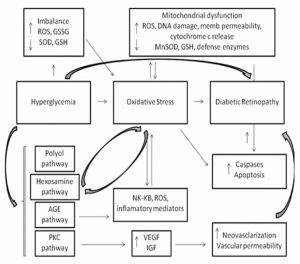 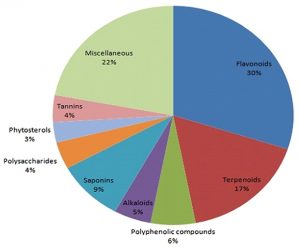 Flavonoids as a Complementary Approach for Management of Diabetes: One of the polyphenolic antioxidants that can be found in plants, herbs, and other ailments are Flavonoids. They function as powerful antioxidants having a very important role in our metabolism. The ability of antioxidants to protect against the deleterious effects of hyperglycemia and also to improve glucose metabolism and intake must be considered as leads of choice in diabetes treatment. In addition to their antioxidative activity, many flavonoids were demonstrated to act on biological targets involved in type 2 diabetes mellitus such as α-glycosidase, glucose co-transporter or aldose reductase 23.

Flavonoids are divided into several types, and some foods are particularly rich in specific types 1. Their structure consists of two moieties: benzopyran (A and C rings) and phenyl (B ring) groups.

Based on the C ring type and to the linkage between the benzopyran and phenyl groups, 6 groups of flavonoids have been categorized as follows: flavones, flavonols, flavanones, isoflavones, flavanols (or flavan-3-ols), and anthocyanidins 9. 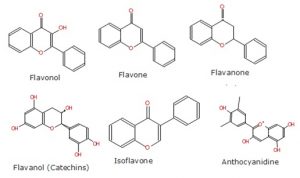 Types of Flavonoids and Plants with Antidiabetic Potential:

Anthocyanins, a significant group of polyphenols in bilberries and other berries, may also prevent Diabetes Mellitus and obesity. Anthocyanins from different sources have been shown to affect glucose absorption and insulin level/secretion/action and lipid metabolism in-vitro and in-vivo 26, 27. Many in-vitro studies suggest that the anthocyanins may decrease the intestinal absorption of glucose by retarding the release of glucose during digestion 28.

The most commonly found anthocyanidins in nature are cyanidin, delphinidin, petunidin, peonidin, pelargonidin, and malvidin, but these are very rarely found in their aglycone (nonsugar) forms 11. 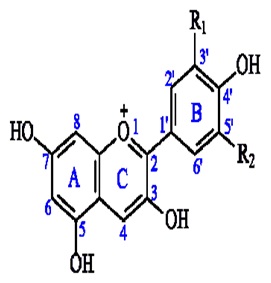 Blueberry (Vaccinium myrtillus L.) is a perennial flowering plant, being the most important species of genus Vaccinium and is widely known and found in Europe, Asia, and North America. Blueberry contains a significant concentration of phenolic compounds, mainly anthocyanins. Depending on the number of hydroxyl and methoxyl groups there are 6 common anthocyanidins (sugar-free counterparts) found in blueberry-cyanidin (Cy), peonidin (Pn), pelargonidin (Pg), malvidin (v), delphinidin (Dp), and petunidin (Pt) that helps in improving insulin sensitivity 2.

The hypoglycemic effect of bilberry plant belonging to same genus Vaccinium may be mediated in part by interference with enzyme action, especially α-glucosidase activity, and also by effects on insulin secretion and glucose transport. Anthocyanins were found to stimulate insulin secretion from cultured rodent pancreatic B cells, with cyanidins and delphinidins (the major anthocyanins in bilberry) showing the greatest effect among different anthocyanins tested. Also, it was found that low-bush blueberry, which belongs to the same family as bilberry, at 12.5 μg/mL was expected to enhance glucose transport into muscle cells and adipocytes in the absence of insulin.

In an animal study with a water-alcohol extract of bilberry leaves given to streptozotocin-induced diabetic mice (3 g/kg/day for 4 days), a significant decrease (26%) was seen in plasma glucose 11. Fruits and leaves of Schizandra chinensis (Schisandraceae) contain high 16 levels of anthocyanins, which could be related to its favorable effectiveness against diabetic patients10.

2. Flavanones: Flavanones are present in many herbs and fruits, but among all the plant kingdom the species where flavanones are most commonly found are citrus. Citrus contains a significantly big amount of flavanones 1, being the richest source of flavanones, especially when they are still immature. 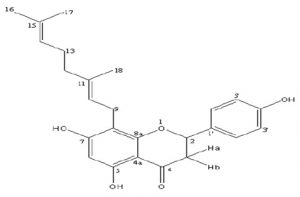 The Flavanone compound with antidiabetic activity was isolated from ethyl acetate extract of Artocarpus communis leaves using column chromatography techniques. The structure of the flavanone compound was elucidated by spectroscopic evidence and comparison to published values. This compound, 8-geranyl-4,5,7-trihydroxyflavone, showed strong antidiabetic activity on α-glucosidase inhibition assay with IC50 18.120 μgmL8.

3. Flavonols: Flavonols are the most commonly found type of flavonoids. As they are widely spread in nature and are found as plant pigments and also in the leaves. These are the two main groups of flavonols found in nature:

4. Flavonols: Flavonols are a class of flavonoids that have the 3-hydroxyflavone backbone. Their diversity stems from the different positions the phenolic -OH groups. They are distinct from flavanols (with an "a," like catechin), another class of flavonoids 8. The most common types of flavonols are 3-hydroxyflavone, Azaleatin, Fisetin, Galangin, Gossypetin, Kaempferide, Kaempferol, Isorhamnetin, Morin, Myricetin, Natsudaidain, Pachypodol, Quercetin, Rhamnazin, Rhamnetin. 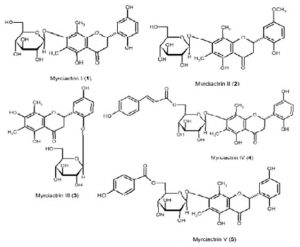 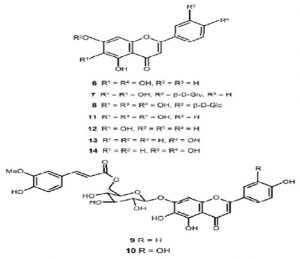 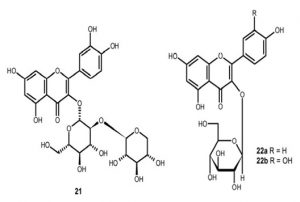 In one of the study, two dihydroflavonol glycosides such as engeletin (29) and astilbin (30), isolated from the leaves of Stelechocarpus cauliflorus (family: Annonaceae), exhibited inhibitory activity against a recombinant human aldose reductase 6. 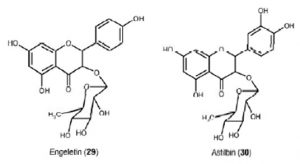 6. Flavones: Not so common as Flavonols, Flavones can be found in some herbs and plants, but their amounts and occurrence are good close to that of Flavonols. 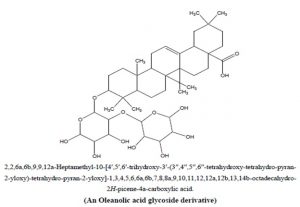 7. Isoflavones: Isoflavones are mainly present in the Leguminosae family, being soybean sprouts a very good source of isoflavones 6. Leguminous plants are known for their high levels of bioactive compounds, which can enhance glucose metabolism by the following:

The research corroborated diminishing glucose-6-phosphatase activity and phosphoenolpyruvate carboxykinase (PEPCK) as well, together with a glucokinase activity increase, suggesting that genistein and daidzein block glucose production in the liver 14, 15.

8. Catechins: Catechins are another type of flavonoids that can be found in apples, cherries, pears, tea and even in wine 2.

9. Chalcones: Chalcones have been reported as having important antibacterial, anti-fungal, anti-tumor, and anti-inflammatory properties7. Chalcones are also responsible for the yellow pigmentation of petals and anthers 8 in certain flowers as Petunia on its early stages but converted to colorless flavanones9. This type of flavonoids are less frequent, and their occurrence in nature is not so common, only about 24 different kinds of chalcones are known to occur in nature 10.