ABSTRACT: Flavonoids are the natural compound widely distributed in plant kingdom, it is responsible for the various colors exhibited by bark, leaves, flowers, fruits and seeds of plants. They are the secondary metabolites of plant with significant antioxidant properties. Flavonoids have antioxidant, sedative, antidepressant, anticonvulsant, anti-proliferative, anti-inflammatory, anti-microbial, anticancer, cardioprotective, antihypertensive, antiulcerogenic, antidiabetic and hepatoprotective activity. Many researchers have revealed that the above mentioned pharmacological actions are mainly due to its antioxidant property. Flavonoids have effect on mammalian enzymes like protein kinases, alpha-glucosidase and aldose reductase, thereby regulate multiple cellular signaling pathway that were altered during disease conditions. Various researches on flavonoids are in progress due to its versatile health benefits.  En number of flavonoids are available in the market as pharmaceutical products because of its cost effective bulk production and health benefits. The present review is focused on the classification, metabolism, pharmacological and biological actions and flavonoid supplement available in market.

INTRODUCTION: Flavonoids  belong to a group of natural substances with low molecular weight phenolic compound, derived from  secondary metabolites found in fruit, vegetables, nuts, seeds, grains, bark, roots, stems, flowers, tea and wine.1 Flavonoids have been identified, many of which are responsible for the attractive colors of flowers, fruit, and leaves. More than 4000 flavonoids are found in nature.

Flavonoids occur both in freestate and as glycosides. The aglycone part of Flavonoids consists of a benzene ring (A) condensed with a six membered ring (C), which in the 2-position carries a phenyl ring (B) as a substituent.  Flavonoids are characterized by C6-C3-C6.2 Structurally flavonoids can be classified according to the benzopyrone saturation and different substitution on the ring. The Flavonoids are categorized into flavonols, flavones, catechins, flavanones, anthocyanidins and isoflavonoids. The structures of the major classes are shown in Fig. 1. Flavonoids can be classified into various classes.3

Functions of Flavonoids in plant:

TABLE 1: FUNCTIONS OF FLAVONOIDS IN PLANT

Many dietary flavonoids occurs in O- glycosides, the common glycosides are glucose, galactose, arabinose and rhamnose. The presence of sugar moieties resists the Beta hydrolysis by pancreatic enzyme. 2β-endoglycosidase in small intestine is capable of flavonoid glycoside hydrolysis. Lactase phlorizin hydrolase and nonspecific cytosolic enzyme are reported to deglycosylate flavonoid and allow for conjugation reaction. The bioavilability of flavonoid vary with the location and structure of sugar moiety in the flavonoid.  Absorption depend upon the dosage, diet, sex difference and the microbial population in the colon. Liver plays major role in the absorption of flavonoid that is absorbed in small intestine than in colon. Metabolism of Flavonoid depend upon the gut flora. The pyrone ring in the Flavonoid is cleaved by microflora, result in the formation of phenyl acetic acid, phenyl propionic acid and inert by products.

During pyrone ring breakage the sugar moiety in Flavonoid will be removed by microflora, and result in aglycone moiety of Flavonoid that can easily penetrate through intestinal wall. HPLC technique in analysis of Flavonoid in urine and feaces provide evidence of methylation, hydroxylation, O-methylation, sulfation, glucuronisation which occurs as a byproduct primarily of Liver and intestine microbial transformation. 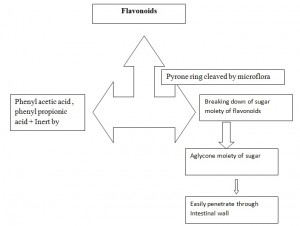 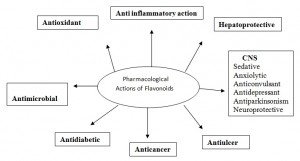 Mechanism of flavonoids as antioxidants 6, 7:

Flavonoids are also called as free-radical scavengers. The antioxidant activity was mainly due to their ability to donate hydrogen. Free radical scavenging capacity is primarily attributed to high reactivities of hydroxyl substituents that participate in the reaction.

The increased levels of free radicals leading to produce an imbalance in antioxidant defense mechanism and leads to oxidative stress. This causes death of cells, leading to tissue damages. Various researches have been done to investigate the antioxidant potential of different Flavonoids.

Flavonoids have been demonstrated to have antiallergic, anti-inflammatory, anti cancer and anti diabetic activity. The broad range of therapeutic effects of flavonoids can be attributed to their antioxidant properties.

Flavonoids are reported to produce CNS activity by various mechanisms.

Flavonoids are good source of antioxidant, it has been reported that it increases the endothelial nitric oxide release and result in relaxation of blood vessels in conditions like hypertension and stroke14. Studies on hespiridine and naringin revealed they are effective in age related increases in blood pressure 15.  Epicatechin, quercetin, avicularin are reported to have effect in cardioprotective activity16.

Quercetin 18, Isoquercitrin, biochanin- A and formononetin are reported to have effective action against controlling cholesterol in experimental models. The total flavonoids from leaves of Nelumbo nucifera 19 evidenced to have hypolipidemic activity in Wistar rats with high-fat diet-induced hyperlipidemia

Many flavonoids are reported to have antidiabetic action by acting on the biological targets that involved in diabetes mellitus type –2 such as aldose reducatse and α- glucosidase 21, 22.

Diabetic complications like neuropathy, retinopathy and nephropathy are caused by an increase of polyol pathway flux, activation of protein kinase C isomers, advanced glycation end-products (AGEs) formation, increase in hexosamine pathway flux. Flavonoids are shown to reduce the deleterious effect of hyperglyemia due to their antioxidant property.

Various epidemiological studies showed that flavonoid are having beneficial effect against various type of cancer such as colon, breast, lung, prostate and pancreas 29, 30. Flavonoids are reported to have anticancer activity by various mechanism such as carcinogen inactivation, cell cycle arrest, antiproliferation, induction of apoptosis and inhibition of angiogenesis 32, 33. Various research studies revealed that kinases such as dual specificity tyrosine phosphorylation- regulated kinase 1A (DYRK-1A), glycogen synthase kinase-3 (GSK3), cyclin-dependent kinases (CDKs) are involved in cancer 34, 35.

TABLE 3: FLAVONOIDS AND THEIR MODE OF ACTION AGAINST CANCER

Various research work were carried out to prove the anticancer properties of flavonoids.39, 40

The antioxidant, anti-inflammatory, anti allergic and antispasmodic action of Flavonoids accounts for it beneficial effect in respiratory tract diseases41.  Many Flavonoids are reported to have modulate airway mucus secretion, it includes apigenin, silibinin and wogonin 20.

Flavonoids are reported to have beneficial effect in treating digestive tract problem. Many research reveals that flavnoids are having anti ulcer, Hepatoprotective, antidiarhoeal action.42- 44

Many Flavonoids containing herbal products are prescribed for genitourinary tract ailment involving prostatitis and urinary tract infections 45, 46.  Flavonoids are reported to have antispasmodic actions in the bladder and uterus preparations 47.

Various research studies revealed that the flavonoids have beneficial effects in skin ailments primary due to its antioxidant, anti inflammatory and soothing action.

Most of the flavonoids are proven to have antimicrobial effects and used in various preparations as a therapeutic agent.

TABLE 4: FLAVONOIDS AND THEIR SPECTRUM OF ACTION

Many flavonoids are available in market as natural supplement. It is available in India and throughout the world. 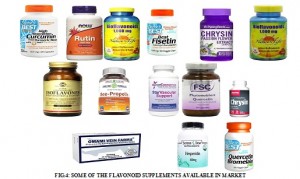 FIG.4: SOME OF THE FLAVONOID SUPPLEMENTS AVAILABLE IN MARKET

CONCLUSION: This review confirms that flavonoids are having beneficial effects in neurodegenerative disease, cancer, diabetes, respiratory, cardiovascular, digestive ailments. It is also proven to have antibacterial, antifungal and antiviral effects. Most of the pharmacological activities of flavonoids are mainly due to its antioxidant activity. Many of the flavonoids are used as the nutritional supplements worldwide.

ACKNOWLEDGMENT: Authors would like to thank Sri Ramachandra University, Chennai for providing necessary support and facility.