ABSTRACT: The purpose of writing this review on floating drug delivery systems (FDDS) was to compile the recent literature with special focus on the types of floating drug delivery systems, principal and mechanism of floatation to achieve gastric retention. Drug delivery systems are those that float immediately upon contact with gastric fluids present promising approaches for increasing the bioavailability of drugs with absorption windows in the upper small intestine. However, immediate floating can only be achieved if the density of the device is low at the very beginning. Devices with an initially high density (which decreases with time) first settle down in the stomach and, thus, undergo the risk of premature emptying. Inherent low density can, for example, be provided by the entrapment of air or by the incorporation of low density materials or foam powder. This review explains briefly about factors affecting floating system, evaluation parameters and application of the system.

INTRODUCTION:Despite tremendous advancement in drug delivery, oral route of administration has received the more attention and success because the gastrointestinal physiology offers more flexibility in dosage form design than other routes. Hence, research continuously keeps on searching for ways to deliver drugs over an extended period of time, with a well-controlled release profile.

Gastric emptying of dosage form is extremely variable process and ability to prolong and control the emptying time. Gastric transit time is valuable asset for dosage forms, which reside in the stomach for a long period of time than conventional dosage form.

Conventional oral dosage forms such as tablets, capsules provide specific drug concentration in systemic circulation without offering any control over drug delivery and also cause great fluctuations in plasma drug levels. Many attempts have been made to develop sustained release preparations with extended clinical effects and reduced dosing frequency 1, 2. A problem frequently encountered with conventional sustained release dosage forms is the inability to increase their residence time in stomach and no control over drug delivery, leading to fluctuations in plasma drug level.

Gastric emptying of dosage forms is an extremely variable process and ability to prolong and control the emptying time is a valuable asset for dosage forms, which reside in the stomach for a longer period of time than conventional dosage forms. Gastric emptying occurs during fasting as well as fed states. The pattern of motility is however distinct in the 2 states. During the fasting state an inter-digestive series of electrical events take place, which cycle both through stomach and intestine every 2 to 3 hours 3.

As the phase progresses the intensity and frequency also increases gradually.

After the ingestion of a mixed meal, the pattern of contractions changes from fasted to that of fed state. This is also known as digestive motility pattern and comprises continuous contractions as in phase II of fasted state. These contractions result in reducing the size of food particles (to less than 1 mm), which are propelled toward the pylorus in a suspension form. During the fed state onset of MMC is delayed resulting in slowdown of gastric emptying rate 6, 7.

Floating drug delivery systems: Floating systems are low density systems that have sufficient buoyancy to float over the gastric contents and remain in the stomach for a prolonged period. While the system floats over the gastric contents, the drug is released slowly at the desired rate, which results in increased gastro-retention time and reduces fluctuation.

(A)Non-effervescent systems: This type of system, after swallowing, swells via imbibition of gastric fluid to an extent that it prevents their exit from the stomach. The formulation methods of such type dosage forms involves the mixing of the drug with a gel, which swells when comes in contact with gastric fluid and maintains a relative integrity of shape and a bulk density of less than one within the outer gelatinous barrier. The air trapped by the swollen polymer provides buoyancy these dosage forms. The most commonly used excipients in these systems include hydroxypropyl methyl cellulose (HPMC), polyacrylate polymers, polyvinyl acetate, carbopol agar, sodium alginate, calcium chloride, polyethylene oxide and polycarbonates. This system can be further divided into four sub-types 8, 9, 10:

(i)        Colloidal gel barrier system: These types of systems contain drug with gel-forming hydrocolloids which allow them to remain buoyant on the stomach content. This prolongs GRT and maximizes the amount of drug at its absorption sites in the solution form for ready absorption. This system incorporates a high level of one or more gel-forming highly soluble cellulose type hydrocolloid as hydroxypropyl cellulose, hydroxyethyl cellulose. This hydrocolloid hydrates and forms a colloid gel barrier around its surface after coming in contact with gastric fluid and also helps in sustain releasing of drug.

(ii)      Microporous Compartment system: In this technology, a drug reservoir is encapsulated inside a microporous compartment with pores along its top and bottom walls. The peripheral walls of the drug reservoir compartment are completely sealed. This sealing prevents any direct contact of gastric surface with the un-dissolved drug. The flotation chamber containing the delivery system to float over the gastric content entrapped air allows, in the stomach. Gastric fluid enters through an aperture, dissolves the drug and carries the dissolved drug for continuous transport across the intestine for absorption.

(iii)    Alginate beads:To develop Multi-unit floating dosage forms, the freeze dried calcium alginate has been used. Spherical beads of approximately 2.5 mm in diameter can be prepared by the precipitation of calcium alginate via dropping sodium alginate solution into aqueous solution of calcium chloride. The beads are then separated, snap-frozen in liquid nitrogen, and freeze-dried at -40ºC for 24 hours, it leads to the formation of a porous system which can maintain a floating force for over 12 hours. These floating beads prolonged residence time for more than 5.5 hours.

(iv)    Hollow Microspheres/Microballons: A novel emulsion solvent diffusion method used to prepare hollow microspheres loaded with drug in their outer polymer shelf ethanol/ dichloromethane solution of the drug and an enteric acrylic polymer was poured into an agitated solution of poly vinyl alcohol (PVA) that was thermally controlled at 40ºC. The gas phase is generated in the dispersed polymer droplet by the evaporation of dichloromethane formed in the internal cavity of microsphere of the polymer and drug. The microballoon floated continuously over the surface of an acidic dissolution media containing surfactant for more than 12h.

(B)  Effervescent Systems: These buoyant systems utilize matrices prepared with swellable polymers such as methocel polysaccharides (e.g., chitosan) and effervescent components (e.g., sodium bicarbonate, citric acid or tartaric acid). The system is so prepared that when it arrives in the stomach carbon dioxide is released, causing the formulation to float in the stomach 11.

i.     These systems require a high level of fluid in the stomach for drug delivery to float and work efficiently-coat.

ii.     Not suitable for drugs that have solubility or stability problem in GIT.

iii.     Drugs such as Nifedipine which is well absorbed along the entire GIT and which undergoes first pass metabolism, may not be desirable.

iv.     Drugs which are irritant to gastric mucosa are also not desirable or suitable.

v.     The drug substances that are unstable in the acidic environment of the stomach are not suitable candidates to be incorporated in the systems.

vii.     These systems do not offer significant advantages over the conventional dosage forms for drugs, which are absorbed throughout the gastrointestinal tract 14, 15, 16.

Mechanism of floating systems: Floating drug delivery systems (FDDS) have a bulk density less than gastric fluids and so remain buoyant in the stomach without affecting the gastric emptying rate for a prolonged period of time. While the system is floating on the gastric contents (Fig.: 1) the drug is released slowly at the desired rate from the system. After release of drug, the residual system is emptied from the stomach. This results in an increased GRT and a better control of the fluctuations in plasma drug concentration.

However, besides a minimal gastric content needed to allow the proper achievement of the buoyancy retention principle, a minimal level of floating force (F) is also required to keep the dosage form reliably buoyant on the surface of the meal. To measure the floating force kinetics, a novel apparatus for determination of resultant weight has been reported in the literature. The apparatus operates by measuring continuously the force equivalent to F (as a function of time) that is required to maintain the submerged object.

The object floats better if F is on the higher positive side. This apparatus helps in optimizing FDDS with respect to stability and durability of floating forces produced in order to prevent the drawbacks of unforeseeable intra-gastric buoyancy capability variations 17. 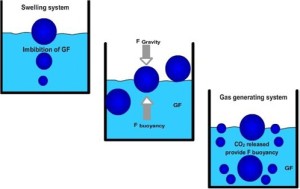 b)      Size and Shape: Dosage form unit with a diameter of more than 7.5 mm are reported to have an increased GRT competed to with those with a diameter of 9.9 mm. The dosage form with a shape tetrahedron and ring shape devises with a flexural modulus of 48 and 22.5 kilo-pond per square inch (KSI) are reported to have better GIT for 90 to 100 % retention at 24 hours compared with other shapes.

c)      Fed or Unfed State: Under fasting conditions, the GI motility is characterized by periods of strong motor activity or the migrating myoelectric complexes (MMC) that occurs every 1.5 to 2 hours. The MMC sweeps undigested material from the stomach and if the timing of administration of the formulation coincides with that of the MMC, the GRT of the unit can be expected to be very short. However, in the fed state, MMC is delayed and GRT is considerably longer.

d)     Nature of the Meal: Feeding of indigestible polymers of fatty acid salts can change the motility pattern of the stomach to a fed state, thus decreasing the gastric emptying rate and prolonging the drug release.

Inert atmosphere was maintained by purging nitrogen gas at the flow rate of 50 ml/min 23, 24, 25.

Application of Floating Drug Delivery Systems: Floating drug delivery offers several applications for drugs having poor bioavailability because of the narrow absorption window in the upper part of the gastrointestinal tract. It retains the dosage form at the site of absorption and thus enhances the bioavailability. Theseare summarized as follows 26, 27.

CONCLUSION: The floating drug delivery system was prepared in an effort increase the gastric retention time of the dosage form and to control drug release. One of the most feasible approaches for achieving a prolonged and predictable dug delivery profiles in the gastrointestinal tract is to control the gastric residence time, using gastro-retentive dosage forms that will provide us with new and important therapeutic options. Floating matrix tablets are designed to prolong the gastric residence time after oral administration, at a particular site and controlling the release of drug especially useful for achieving controlled plasma level as well as improving bioavailability. Although there are number of difficulties to be worked out to achieve prolonged gastric retention, a large number of companies are focusing toward commercializing this technique.

ACKNOWLEDGEMENT: The authors are thankful to Dr. RM Dubey, Vice-Chancellor, IFTM University, Moradabad, India, for making available the required facilities for this work.