ABSTRACT: Zanthoxylum rhetsa DC. shoot is highly priced and one of the most preferred folk vegetable among the Indigenous people of Arunachal Pradesh, India. It is also used as folk medicinal purpose among the Adi tribe of the state. The methanol extract of shoot were evaluated for total phenolic content (Folin-Ciocalteu’s method), total flavonoid content (colorimetric method) and antioxidant potential ((DPPH & ABTS). Folk use, various mode of cooking, demand as vegetable in the local market is also discussed in this paper. The methanol extract contains considerable phenolic (117.95±3.22 mg GAE/g) and flavonoid (120.14±2.31 µMRE/g) with no much significant correlation between the total content of phenolic and flavonoid and antioxidant potential was found as IC50 value of 271±3.5µg/ml were recorded in ABTS assay and IC50 value of 306± 4.21µg/ml was found in DPPH assay.

INTRODUCTION:Indigenous people in different parts of the world have their distinct culture and customs. Mostly they are inhabitants of mountainous regions and closely associates with river, forest and land, and use available resources for their food, medicine, clothes and house.

Arunachal Pradesh, an Indian state lies in North East of India, is a home of 26 major tribal people and more than 110 sub-tribes.

The traditional practices, festive celebrations and traditional knowledge is as rich as the tribes itself,  geographical isolation from the Indian mainland has brought them certain distinctive characteristics in culture and customs, the state has many dimensions in food habits, flavour and cooking mode.

Indigenous people use innumerable herbs, fruits, animals, insects, worms etc. in their folk food. It is interesting to note that some indigenous people of Arunachal Pradesh also use monkey, rat, snake and dog in their folk food. “Let food be your medicine”, once said Hippocrates over 2500 years ago. Man have been using plant as food and medicines since antiquity and in recent years there is a growing interest in nutraceutical science which provide health benefits and are alternative to modern medicine 1. Fruit and vegetables are major sources of dietary antioxidant 2.

Crude extracts of herbs and spices, therefore plant materials rich in phenolic compounds are of increasing interest in the food industry because they retard oxidative degradation of lipids and thereby improve the quality and nutritive value of food 5.

Zanthozylum rhetsa DC. (Rutaceae) is a deciduous tree up to 75 ft. in height with a large crown, covered with defensive prickles (fig. 1) leaves crowded at the end of the branch-lets, tender leaves are eaten; flower is small, light-green in large crowded terminal, seed globose, bluish black, shinning with essential oil 6.

The tender shoot is use among indigenous folk as hot spice due to its characteristic aroma and burning sensation, now a day this spice vegetable has also become a showcase cuisine item in the locality as this folk food is very popular even to the foreign visitors.  The fruit is use as fish poisoning fruit by indigenous people of Arunachal Pradesh.

Essential oil from Zanthoxylum rhetsa leaf  and seed oil is reported to be anti-bacterial 7, 8, significant anticestodal property  from leaf extract 9, high nitrogen content from the leaf 10, pharmacognostic of spine was reported by Lalitharani et al (2013) 11.

Present study was carried out to determine total phenolic content, total flavonoid content, antioxidant potential, demand and selling of the shoot as vegetable in the Pasighat market (local market) and use of the shoot as folk food among tribal people of Arunachal Pradesh. 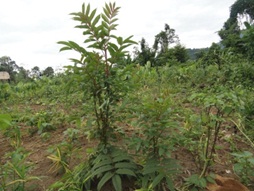 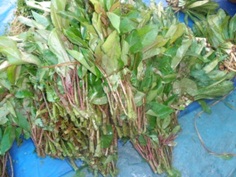 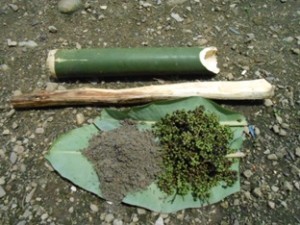 FIGURE 3: SEED AND SAND TO BE USED IN FISH POISONING 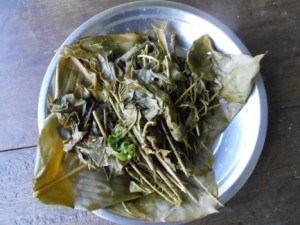 Field Survey: The folk food botanical survey was carried out from January 2011 - February 2013 in East Siang District of Arunachal Pradesh. The help from local guides were used to locate the plant in natural habitat. Personal interviews were held with old women and village elders.  Market survey was done at Pasighat market in East Siang District of Arunachal Pradesh, India once in a week during the study period.

Discussion, interview and questionnaire regarding price, source, season of availability and income by selling Zanthoxylum vegetable were carried out to wild vegetable sellers, local vendors and villagers. The selling unit of Zanthoxylum rhetsa was weighed as ± 50 gram per bundle which cost ₹ 20/- (Fig. 2).

At the study site market there are 34 regular vendors and a vendor approximately sells 25-30 kg/ month. The fruit starts ripe in the month of August and leaf is found throughout the year.

Preparation of crude extract: Fresh shoots were bought from Pasighat market in East Siang District of Arunachal Pradesh, India. Shoots were cleaned with distilled water then oven dried at 60 degree Celsius till constant weight was achieved and grinded in laboratory mill and kept in air tight container for future use. 100g powder were soaked in 500 ml methanol overnight and filtered through Whatman paper No. 41.

The residue was re-extracted twice with 500 ml of methanol each. The total filtrate was concentrated by rotatory evaporator at 450 C under reduced pressure and stored at -40C until analysed.

Briefly, to 100 µl of sample extract, or standard, 2.9 mL of DPPH reagent (0.1mM in methanol) was added and vortexed vigorously. The reaction mixture was stored in the dark for 30 minute at room temperature and decolouration of DPPH was measured against a blank at 517 nm using an ultraviolet-visible (UV-Vis) spectrophotometer (Lamda-25, Perkin Elmer, Cambridge UK). Linear calibration curves were produced with R2= 0.9999 (Fig. 5) and result was calculated as Trolox equivalent per gram dry sample. The inhibition % was calculated using the formula: 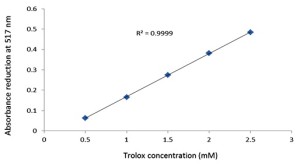 ABTS Free Radical Scavenging Assay: The ABTS radical cation scavenging activity was performed according to Re et al 13 with slight modifications. The ABTS solution (7mM) was reacted with potassium persulfate (2.45mM) solution and kept overnight in dark to yield a dark green-colored solution containing ABTS radical cation. Prior to use in the assay, the ABTS radical cation was diluted with 50% methanol for an initial absorbance of about 0.700± 0.02 at 734nm using UV-Vis spectrophotometer with the temperature set at 30oC.

Free radical scavenging activity was assayed by mixing 100µL of test sample with 2.9ml of an ABTS working standard in a microcuvette. The decrease in absorbance was measured at exactly 1 minute after mixing the solution and then at 1 minute intervals up to 6 minutes when final absorbance was recorded.

Linear calibration curves were produced with   R2= 0.9986 (Fig. 6) for evaluation of antioxidant activity in ABTS and result was calculated as Trolox equivalent per gram dry sample. The inhibition % was calculated using the formula: 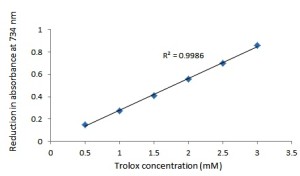 Determination of Total Phenolic Content: Total phenolic content was determined by the Folin-Ciocalteu method 14. Briefly, to 900µL of distilled water and 1mL of the Folin-Ciocalteu reagent 100µL of filtered extract was added. After 5 minutes, 2mLof saturated sodium carbonate (75g.L-1) and 2 mL water was added. Absorbance of the resulting blue- colored solution was measured at 765nm using UV-Vis Spectrophoto-meter after incubation at 30oC for 1.5 h with intermittent shaking.

Quantification measurement was performed based on a standard calibration curve of 20, 40, 60, 80 and 100mg/100mL of Gallic acid in 80% methanol. Total phenolic content was expressed as Gallic acid equivalent (GAE) in the dry sample. Linear calibration curves were produced with R2=0.9989 (Fig. 7). 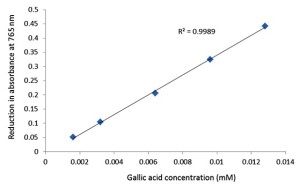 Determination of Total Flavonoid Content: Total flavonoid content was determined by using the colorimetric method of Sahreen and Khan 15 with slight modification. 50mg of sample was dissolved in10 ml of 80% aqueous methanol and filtered through Whatman filter paper No. 42 (125mm). In a 10mL test tube, 0.3ml of extract, 3.4 mL of 30% methanol, 0.15 mL of 0.5M sodium nitrite, and 0.15 mL of 0.3 M aluminium chloride hexahydrate were added and mixed. After 5 minutes, 1mL of 1M sodium hydroxide was added. 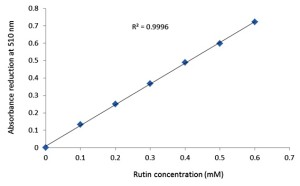 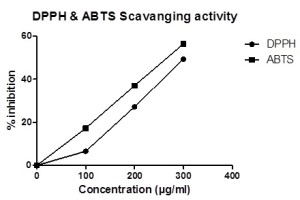 Statistical Analysis: All the assays were carried out in triplicate and the experimental results obtained were expressed as mean SD. IC50 value was calculated by plotting nonlinear regression curve using Graph Pad Prism 5 software.

Folk food use of tender shoot: The tender shoot is use as folk food by the indigenous people of Arunachal Pradesh. This folk food is known for its characteristic aroma and burning sensation which is use as spice folk food. Indigenous women folk prefer to consume raw shoot without any other ingredients like salt and chilly when they work in Jhum field. When cooked, 2-5 shoot is mixed with any folk vegetables. When cooked with Clerodendrum colebrookianum and Pouzolzia bennettiana, prefers most.

The shoot is also steamed with Clerodendrum coolebrokianum shoot by wrapping in leaf of Phrynium pubinerve and placed inside the neck of utensil containing rice and red charcoal or hot soil from fire place is kept on the cover of the utensil, such steamed food is known as “memnam’ in Adi (Fig. 4). As a folk medicine the shoot is used as pain killer, toothache, cold and cough, nerve dislocation and to relieve stress and strain. One Ms Y J Lego of Pasighat town is reported to use the plant in the treatment of cancer patient.

Folk use of fruit: The fruit of Zanthoxylum rhetsa is use in fish poisoning by the indigenous people of Arunachal Pradesh in the month of August –September when the fruit is mature; the matured fruit is mixed with sand, pebbles and water and mixed or pump vigorously by using a stick in bamboo calm with one node intact (Fig. 3).

The main river is diverted to minimise the water volume and the above mixture is pour into the river mouth and poisoned fish is collected. The seed is used as folk medicine in the treatment of cough, breathing problems and asthma.

DPPH Assay: DPPH assay is one of the methods used to determine the antioxidant potential of plant extract 16. DPPH method is based on decrease in purple/dark violet colour of alcoholic DPPH solution 17, 18, when contracted with antioxidant substances like phenolic compounds and have a strong absorption range at 517 nm 19. The DPPH Assay of Zanthoxylum rhetsa shoot is calculated as 851.42µM/g±3.44 with IC50 value of 306± 4.21µg/ml (Fig.9).

ABTS:  The pre-formed radical cation of 2,2'-azinobis-(3-ethylbenzothiazoline-6-sulfonic acid) (ABTS*+) is generated by oxidation of ABTS with potassium persulfate and is reduced in the presence of such hydrogen-donating antioxidants 13, the ABTS assay of the shoot of Zanthoxylum rhetsa was evaluated to 167.69 ±3.21 µM/g with IC50 value of 271±3.5µg/ml (Fig. 9).

Total Flavonoid Content (TFC):  Flavonoids are class of secondary metabolites with significant antioxidant and chelating properties. Antioxidant activity of flavonoid depends on the structure and substitution pattern of hydroxyl groups 19, 20 and 21. The flavonoid content is determined by method by using Aluminium chloride colorimetric assay, 120.14µMRE/g±2.31 flavonoid content was found.

TABLE 1:  TPC, TFC, ABTS AND DPPH VALUES OF THE METHANOLIC EXTRACT OF THE ZANTHOZYLUM RHETSA SHOOT

CONCLUSION: The Zanthoxylum rhetsa is one of the most consumed folk vegetable among the indigenous people of Arunachal Pradesh, the fruit shows fish poisoning activity. It is also used as folk medicine in the treatment of various health problems among the Adi tribe of Arunachal Pradesh. The seedling is seen when jungle is clear and burnt for jhum cultivation, the germination is expected to related with the burnt soil or need high temperature as the plant is not commonly seen grow wild. The need of further scientific investigation of the plant on pharmacognosy, phytochemical, germination and proximate is felt. The shoot contains high phenolic and flavonoid compounds with considerable antioxidants folk vegetable.

ACKNOWLEDGEMENTS: The authors of this paper are highly grateful to the scientist in-charge CSIR-North East Institute of Science and Technology Branch, Itanagar, Naharlagun, Arunachal Pradesh, India for providing the laboratory facilities.