A decade later, the global burden of diabetes was estimated to be 135 million.

The latest WHO estimate – for the number of people with diabetes, worldwide, in 2000 – is 171 million. This is likely to increase to at least 366 million by 2030. Two major concerns are that much of this increase in diabetes will occur in developing countries, due to population growth, aging, unhealthy diets, obesity, and sedentary lifestyles, and that there is a growing incidence of Type 2 diabetes which accounts for about 90% of all cases at a younger age 2. In spite of the presence of known antidiabetic medicines in the pharmaceutical market, remedies from medicinal plants are used with success to treat this disease possibly because they are considered to be less toxic & free from side-effects compared to a synthetic one. In given study herbomineral formulation is used as Antidiabetic preparation composed of 5 medicinal plants & 2 minerals. These plants & minerals are known to possess antidiabetic activity. According to the traditional system of Indian medicine, a combination of substances is used to enhance the desired activity & eliminate unwanted side effects. Given the above information, the present study has been undertaken to evaluate the antidiabetic activity of herbomineral formulation in streptozotocin-induced type 1 diabetic rats 3.

Collection & Authentication of Plant Materials: Selection of the crude drugs has been done after the extensive review of the literature, taking into consideration the specific activity of crude extract and active constituent present in the medicinal plant. All crude drugs were procured from reliable sources. Yashad bhasm (as zinc source) procured from reliable source. Shilajit obtained from J.L. Chaturvedi College of Pharmacy, Nagpur. All the plants used in formulation were authenticated by Department of Pharmacognosy, J.L. Chaturvedi College of Pharmacy, Nagpur University, Maharashtra, India. Minerals also tested for their identification. Streptozotocin (STZ) was purchased from Calbichem Darmstadt, Germany. Glucometer was available at J. L. Chaturvedi College of Pharmacy, Nagpur (Accu check active glucometer).

Preparation of Herbomineral Formulation: The plant's materials were dried under shade at 25 ± 2 ºC & then pulverized by a mechanical grinder & sieved. The extraction was done with a suitable solvent having potent activity. Extraction was done by Soxhlet apparatus & for some plant, cold maceration was done. The quantity of components required for formulating herbomineral drug formulation was calculated based on a literature review where reported activity and doses of the drug on which potent activity obtained was mentioned. Two formulations were prepared using 2% w/v gum tragacanth as suspending agent and considered as lower dose and higher dose formulation.  The formulations were coded F1 and F2, respectively. The amount of plant extracts used for preparing 10 ml of formulations is given in Table 1A & 1B.

Acute Toxicity Studies: The acute toxicity test of herbo-mineral formulation was determined according to the OECD guidelines no 420. Female & male Sprague-Dawley rats (200-250 g) were used for this study.

Weighed quantity of extract was formulated into a suspension. Dose-ranging between 500, 1000, 2000, 5000 mg/kg (po) of test sample were given to various groups containing 3 male 3 female rats in each group. The rats were observed individually after at least once during the first 30 minutes, periodically during the first 24 hrs, with special attention giving during first 4 hrs, and daily after that, for a total of 14 days. The test samples were found to be safe up to a dose of 5000 mg/kg. From the results obtained, 500 & 1000 mg/kg dose was chosen for further experimentation as the maximum dose to be administered.

Induction of Diabetes: Diabetes was induced by a single injection of STZ (50 mg/kg, iv) dissolved in normal saline. The animals were allowed to drink a 5% glucose solution overnight to overcome the drug-induced hypoglycemia. After 48 h of STZ injection, animals showing glucosuria (>2%) were considered as diabetic. Animals (36) were divided into following 6 groups of 6 animals each as follows:

Group 1: Normal untreated rats were given vehicle orally for 28 days.

Group 5: Diabetic rats were given Glibenclamide 5 mg/kg/day orally for 28 days.

Group 6: Diabetic rats were given Insulin 3 IU/kg/day subcutaneously for 28 days.

Treatment with formulation was started after 3 days of STZ injection & it was given daily for 4 weeks. Weekly blood glucose & body weight were measured. Blood glucose was estimated using a commercial diagnostic kit (Accu check active glucometer).

Oral Glucose Tolerance Test: It was carried out after completion of 28 days antidiabetic protocol. Fasted rat divided into groups of 6 rats each. Group 1 served as control received vehicle. Other group received formulation at various doses. The rat of all groups was given glucose (2 gm/kg body weight, p.o.) 30 min after administration of the drug. Blood samples were collected from the tail vein just before glucose administration, i.e. 0 and then at 30, 60, and 90 min after the glucose loading.

Statistical Analysis: All the data were expressed in Mean ± SEM & analyzed statistically using ANOVA followed by Dunnett’s test & compare with the respective control group. A value of P<0.05 was considered statistically significant. 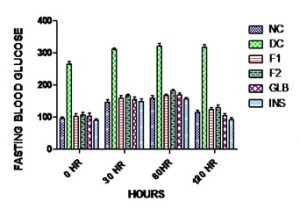 A comparative study from graph 1 reveals that Formulation F2 at a dose of 1000 mg/kg body weight did not show a proportional improvement in the body weight as compared to F1 suggesting that an increased concentration of active ingredients is not always proportionally beneficial.

The effect of test formulation F1 and F2 on blood glucose as per graph 2 achieved on 28 days while Standard drug shows the effect on 21 days and remain same up to next week. Formulation F2 at a dose of 1000 mg/kg did not show a proportional improvement in the Fasting blood glucose as compared to F1 500 mg/kg suggesting that an increased concentration of active ingredients is not always proportionally beneficial. Effect of both test formulation F1 and F2 was found to be comparatively the same.

In graph 3, the mean blood glucose level at 120 min. after glucose administration was at baseline (fasting) in the standard drug, i.e. Insulin and Glibenclamide while in test formulation F1 and F2 treated rat, it was near to baseline as compared with standard drugs.

CONCLUSION: The ability of the formulation to protect body weight loss and a significant decrease in blood glucose levels in diabetic rats support its antidiabetic activity in rats. Based on these result, it could be concluded that herbomineral formulation, a combination of five herbal plants and two minerals exerts a significant antidiabetic effect. This could be due to different types of active principles from various plants, which may have a different mechanism of action. Therefore, the combination may be beneficial. However, it cannot be concluded that a combination of five plants and two minerals may have a synergistic or additive effect. Although further studies remain to be conducted to investigate this hypothesis. The herbomineral formulation considered as a safe supplementary therapy for long-term and effective management of diabetic patients.

Overall, the work presents herbomineral formulation as a new formulation for achieving an antidiabetic activity. Hence, it might help in preventing diabetic complications and may serve as a good alternative in the present armamentarium of antidiabetic drugs.

ACKNOWLEDGEMENT: We are grateful to the Management of J. L. Chaturvedi College of Pharmacy, Nagpur, Maharashtra for providing the facilities to carry out the research work. Special thanks to Guide Dr. V. D. Rangari & Co-guide Ms. M. N. Agrawal for providing required support and guidance in executing formulation studies.